It now costs more to own and operate a typical subcompact than it did to drive a luxury model in 1972.

On the warm summer night of August 20, 1989, Mom and Pop Menendez were relaxing in the living room of their $3.5 Million home on Elm Drive in Beverly Hills. 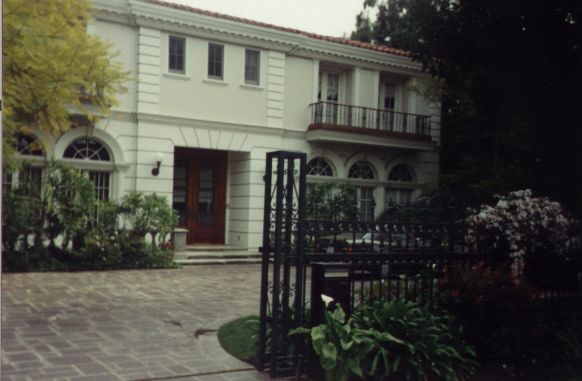 José was wearing a white shirt and blue shorts, Kitty was wearing lavender sweatshirt and white jogging pants. They were watching a video of “The Spy Who Loved Me,” while relaxing on the sofa. 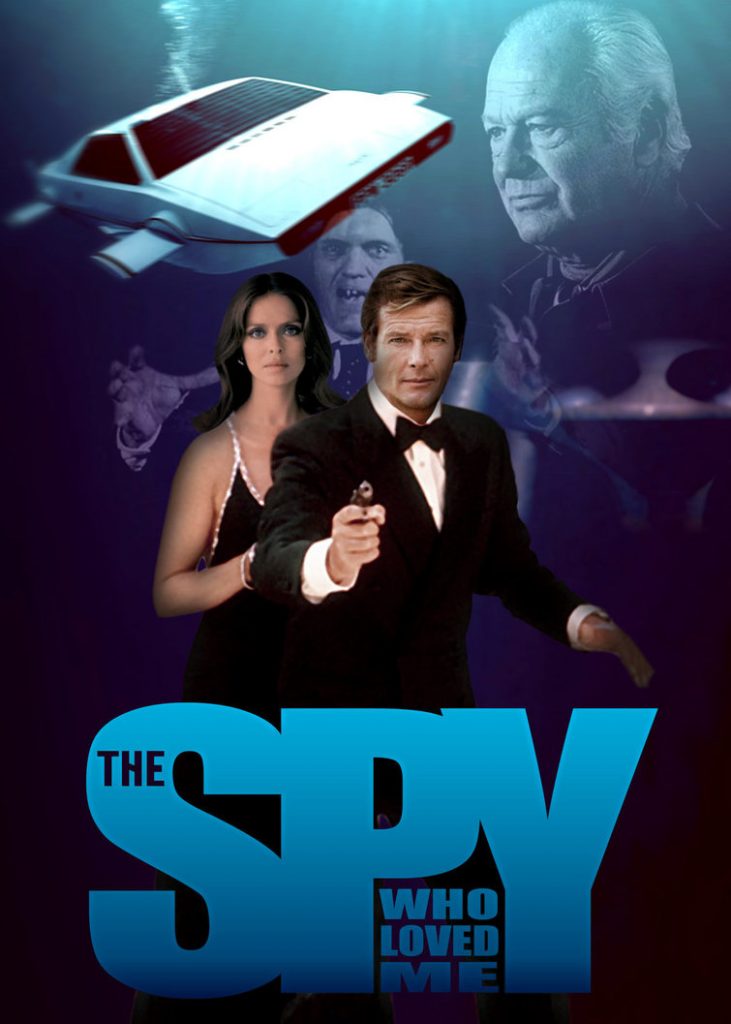 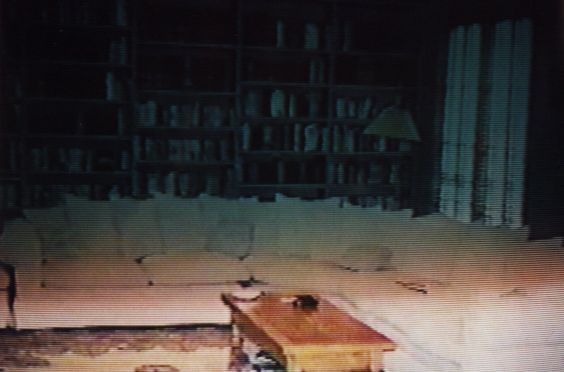 Kitty went into the kitchen and made a couple of cups of blueberries and cream, returned to her husband and dozed off. Their two sons Erik and Lyle were out for the evening. 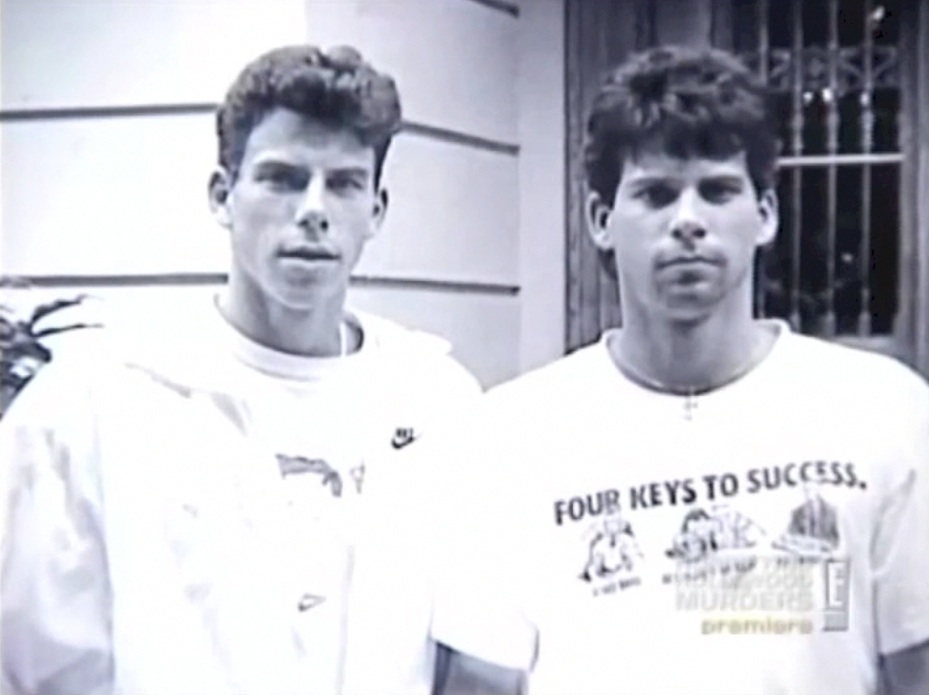 The sons drove a small white hatchback up to the house, got their weapons from the trunk and entered the house, via the French doors. What happened next is pretty gruesome, so I’ll try to keep it brief.

The first shot from a .12 gauge shotgun hit José in the back of the head. That killed him immediately. Did they stop? No. Two more shots, tearing open both arms. Kitty had it much, much worse. She got up and tried to flee. One shot hit her calf, and one fractured her arm. She hit the floor. Got up again to be greeted with another and another. Left thigh, right arm, left breast. So many shots were fired that they ran out of ammunition, but Kitty wasn’t dead yet.  They left her alive and writhing on the floor.  They ran back to the car for more cartridges. This time they used birdshot. One of them went back in, put the gun up to Mom’s cheek, and fired. A total of 10 wounds ripped through her, and she watched the whole thing happen. 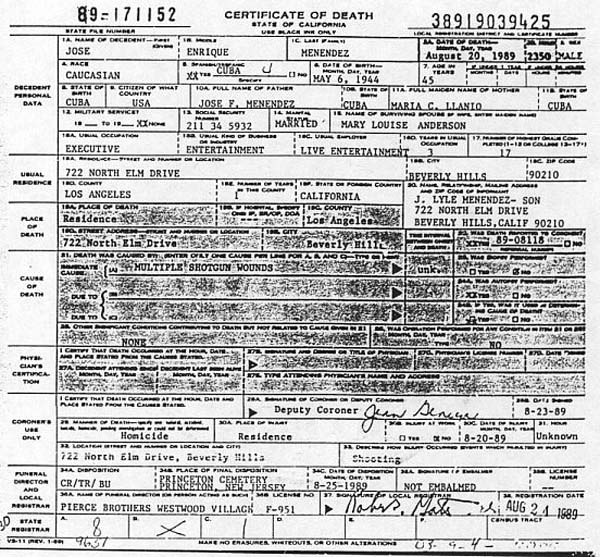 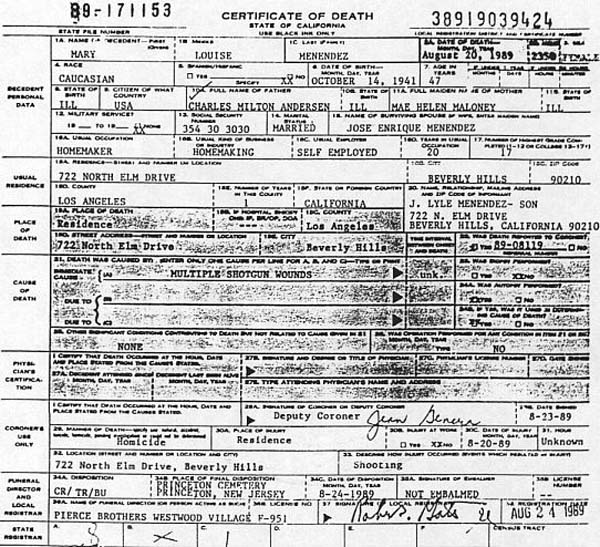 A few of the neighbors heard the shots, but didn’t think much of it. They say that George Burns, who had a home VERY close by, heard them too. But it was Beverly Hills. Things like that just didn’t happen there.

The boys took off, and ditched the clothing and guns. They tried to get tickets for the film, “License to Kill.” Yep, it’s true.  I’m sure they had a giggle over that. They returned to the house and at 11:47, and Lyle made the famous 911 call. When the cops arrived, the two came running out the front door, side by side, in step. They got just outside the gates, and hit the parkway, collapsing in tears. A grieving Erik got up and rammed his head in the tree. Nice touch. Of course they weren’t suspects. The boys told the cops that it must have been a mob hit, due to some of José’s questionable business deals. Of course. 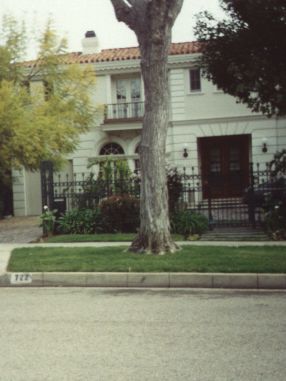 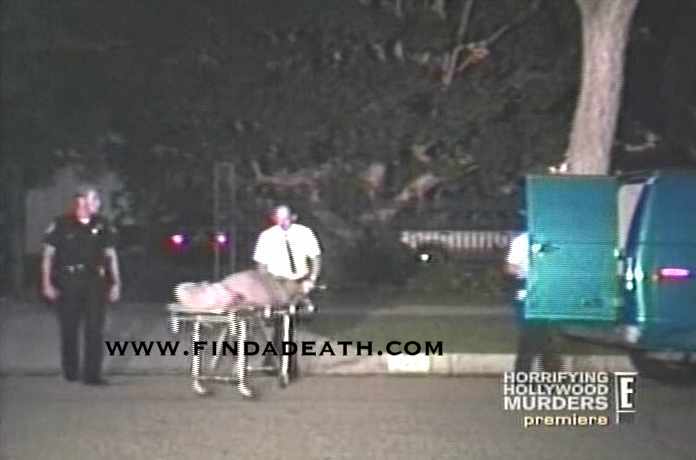 Rumor was that José was so despised by his co-workers, everyone was scrambling for an alibi. 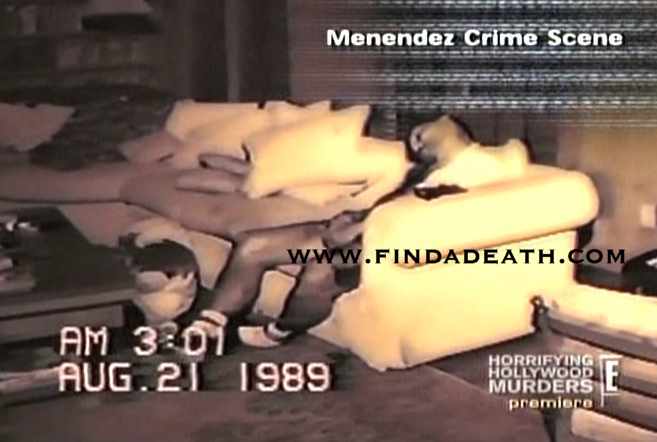 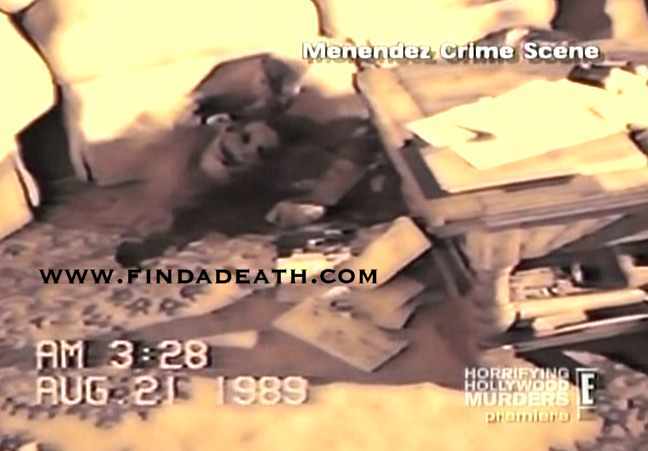 Fearing it was a mob hit, José’s employer, Carolco on Sunset at Holloway (they made the “Rambo” films), put the boys up at the Bel Air Hotel, in a $1300.00 a night suite. By the time of their parents funeral, they had rung up over $2000.00 in room service. In the weeks ahead, those poor grieving boys bought a restaurant in New Jersey, a Porsche, and a Caribbean Holiday. 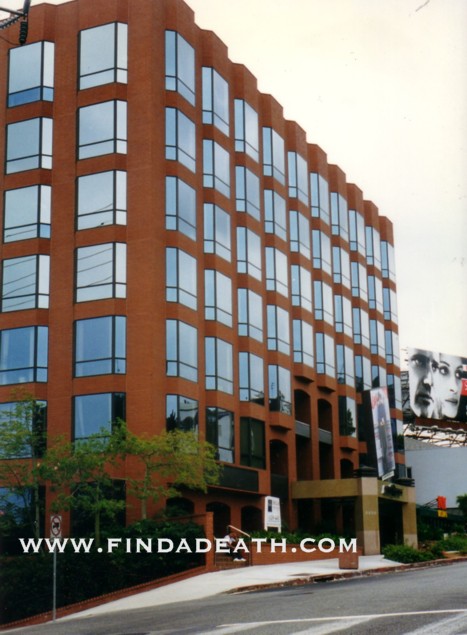 A memorial service was held at the Directors Guild, in Hollywood, on Friday, August 25th. Several Hollywood bigwigs attended, including Sylvester Stallone (whom José really hated). The service was scheduled for 11 a.m. The boys kept the 200 guests waiting for over an hour, so Lyle could get his toupee fixed. Now that IS funny. Lyle then gave an hour-long eulogy. Ugh.

The bodies were flown back to New Jersey, where the family lived before gracing 90210 with their illustrious presence. The funeral was held at the (appropriately decorated) Princeton University Chapel (Thank you Nancy), officiated by Father Brendan Scott. Jose and Kitty are buried in Princeton, New Jersey, in the Princeton Cemetery. 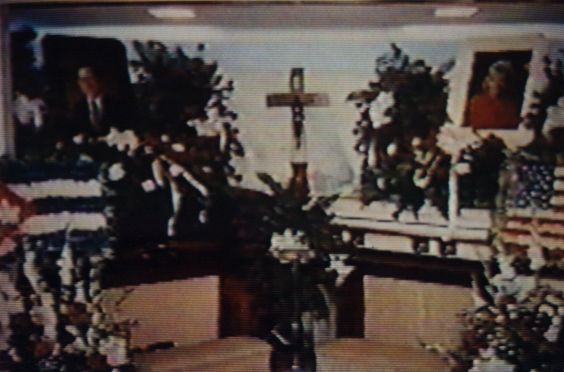 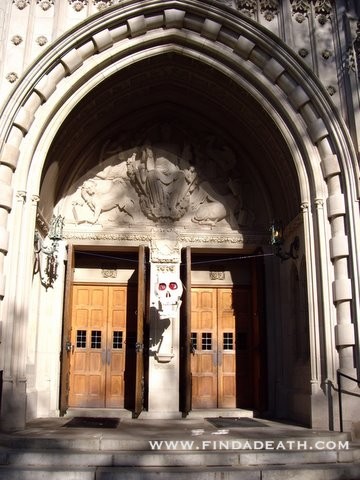 Now, this is where you think, how stupid can you be? Eric confessed to a friend that they had committed the murders. The entire story. Duh. Then he told his therapist, Dr. Jerome Oziel, who secretly taped their conversations, for his own protection. The jerk then bragged to his mistress about it. So much for ethics. They had a fight, and she stole the tapes and went to the cops.

Lyle was arrested as he pulled out of the driveway on Elm. 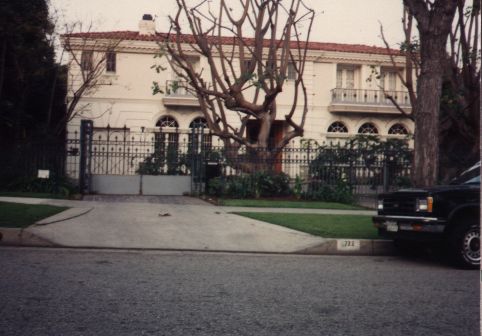 Eric turned himself in shortly thereafter. In 1993, their trial began.  Potential Jurors were to fill this out. 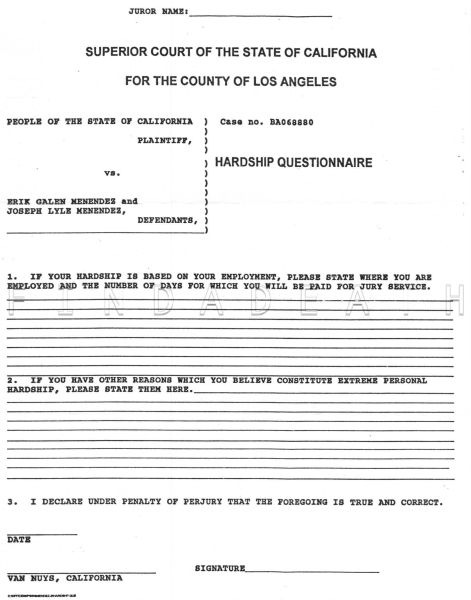 Thank you to the kind soul who donated this juror form.  It’s in one of literally thousands of files on my computer that have no notation of it’s point of origin.
I apologize.

The boys decided they were molested, claiming the “abuse excuse”.  Their parent’s were dragged through the mud, turning them from victims, to villains.  Lyle claimed his father made fun of him from wearing a wig and raped him with a toothbrush.  Kitty was an abusive drunk.  Lyle also said that his father made him perform oral sex on him and that he would put cinnamon in his father’s coffee to make it (you know.  IT.) taste better.  I heard that you couldn’t find cinnamon on any shelf in LA grocery store for quite some time. 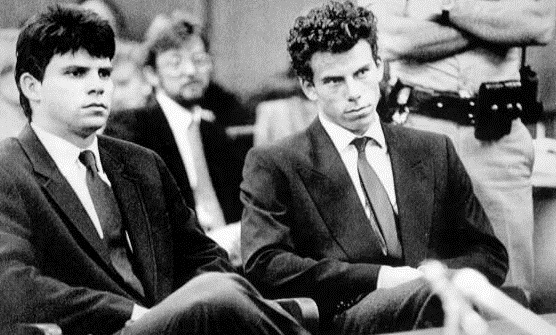 The verdict? Hung Jury. Heh.  Eric wishes.  They were given a new trial in 1995, and on March 20, 1996, they were found guilty. Life. Both of ’em. No hope of parole. HA ha. When they were trying to raise money for Eric’s defense, I wrote them.  I said I’d give ’em fifty bucks for their autographs.  Here is the response. 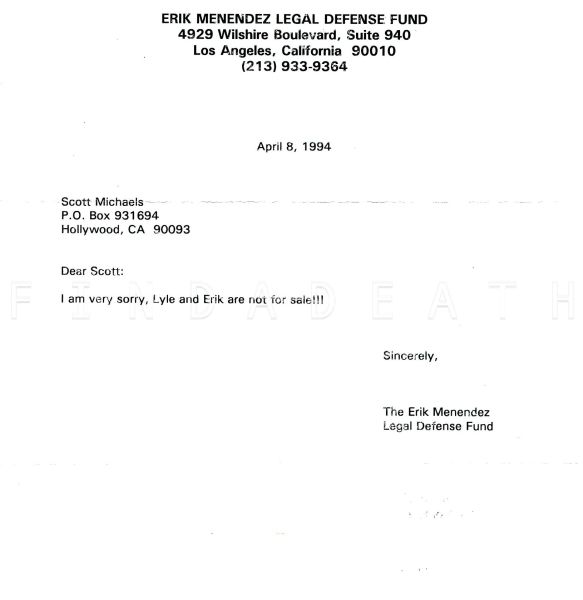 Trivia: The sheet music for “American Pie” was on the music stand in the living room. Bye bye.

At some point some papers were found in Lyle’s cell detailing an “escape” plan.  In the documents – hand written documents – in his JAIL cell – were the words:

Splurge on that sassy new hairpiece that rahawks.

ok, I made one of those up.

UPDATE DECEMBER 2002: Major construction being done at the Menendez house.  I’m surprised they don’t just tear down the sucker, but they’ve gutted the house, and leveled the grounds.  Here are some snaps.

October 2006 – check out the amazing Halloween decoration.  Not the first time the Grim Reaper came knocking on that door. 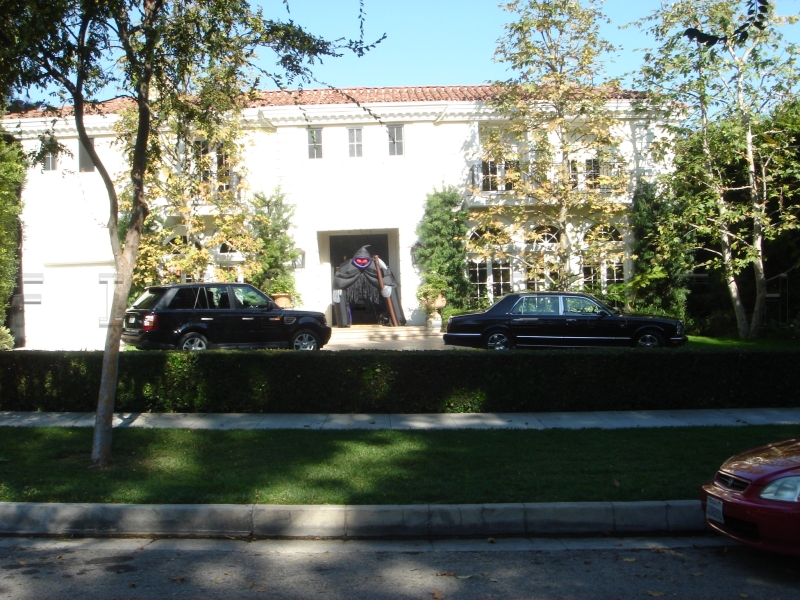 Here are recent shots of Erik and baldy Lyle.  They are both married.  Marriage is sacred. 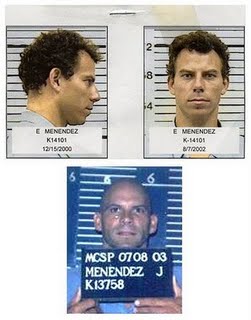 Interesting tidbit from Mark Langlois:  My gal pal went to Bev Hills High with Erik Menendez and all the girls would get wet over his sexy tennis player jock body and preppie good looks. He was a cut up —  but one English class he got up and did a whole memorized Macbeth monologue about wanting to kill King Duncan etc — and the class was mesmerized. They had no idea he was such a intense actor.

A former owner of the murder house was purportedly friends with OJ and Nicole Simpson.  Nicole’s first baby shower was held in the very room the murders took place in.  So, a double death whammy really.  Here’s a snap featuring OJ and José. 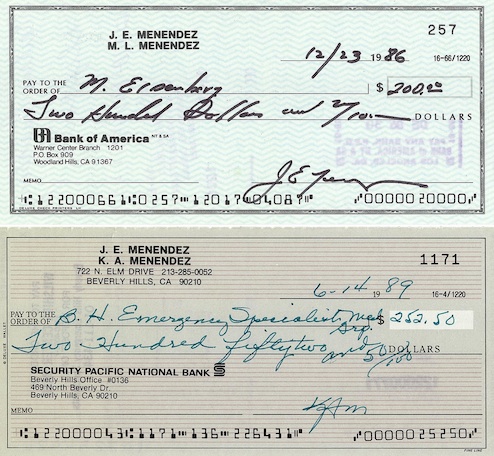 Photos of the house are courtesy of Terri Rios and Justin Mercer.

11 thoughts on “The Murders of Jose & Kitty Menendez”