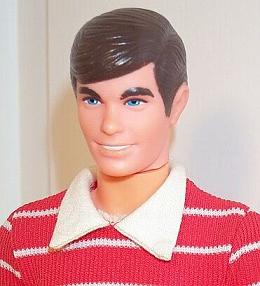 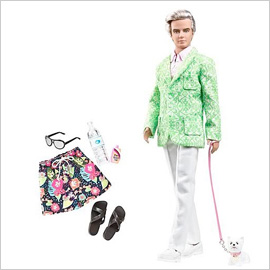 How many of you remember playing Barbie with those little Princess Phone key chains and using the upright empty Kleenex boxes as washing machines?  Oh, and adding a G.I. Joe doll in there to make it spicy! mm.

My father positively beamed with pride.

In recent years, Ken has had a resurgence in popularity with a co-starring role in the movie Toy Story 3.

In March 2011 Troy and I were in London.  Grabbing a taxi at  Paddington Station, well, look what pulled up.  Screw Buck House- we have arrived! 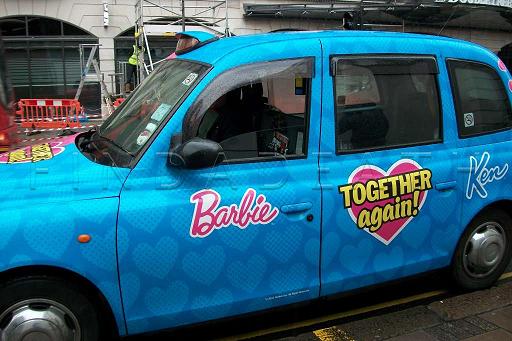 Returning to Los Angeles, we were greeted with these billboards. 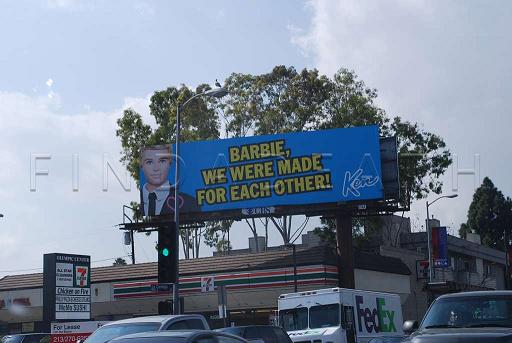 Turns out it was an ad campaign for a new reality series, Genuine Ken: The Search for the Great American Boyfriend.

Ruth Handler invented Barbie and Ken.  She and her husband Elliot formed Mattel in 1948.  Ruth objected to giving the Ken Doll a groin bulge, but was no-clam happy to have the Barbie doll go out with torpedo tits.  An extra measure of creepiness?  The Ken and Barbie Dolls are named after Ruth and Elliot’s own son and daughter, Kenneth and Barbara.

Barbie and Ken are really brother and sister.

Trivia creepiness for you.  Take.  Cher.

I was scanning in obituaries the other day (as I do), and ran across one by the name of Jack Ryan – who invented the Barbie Doll.  Wait, didn’t Ruth Handler invent it?  Confused, I did a little research, and found an amazingly nasty story, addressed in the book Toy Monster.  The writer says, “Don’t be fooled by those wonderful playthings. Behind the scenes the big business of toys is a highly competitive battleground, and is far from fun and games.”

Sounds like the former Mr. Zsa Zsa Gabor (she could sure pick ’em) Jack Ryan was a major perv.

As a result of being the doll’s namesakes,  Ken and Barbara Handler were gifted with a full magazine rack of issues.  The Barbie Doll was known as a “bimbo” with big tits – a physical role model that little girls couldn’t possibly live up to.  Some say that the Barbie Doll inspired many to become anorexic.

Ken… he was just useless eye candy.  With no dick.

Ken Doll’s Ken Handler was intelligent and talented.  He was an accomplished musician and “A real gentleman.  The kind of guy you found in the last century, not this one.”

Ken got married and in 1982, moved to Manhattan.  He and his wife had three children.

One online source states, “Ken Handler, a father of three who died in 1994, was a New York real estate investor and philanthropist. He told People magazine in 1989 that ‘Ken is Malibu. He goes to the beach and surfs. I was the kind of kid who played piano and went to movies with subtitles. All the girls thought I was a jerk.’
Even Ken Handler, son of the original inventors (and the Ken doll’s namesake), thought Barbie should care about more than going to the beach and having a good time. “She should care about poverty and suffering in the world,” he said knowledgeably.”

Ken wrote, directed and produced a movie called The Delivery Boys.  It is about a group of pizza delivery boys who like break dancing.  I sat through it and yes, it’s just that good.

Ken died.  I wanted to know how.  He died in New York.  No access to death certificates for us mere serfs.

In the book Toy Monster, the author states, “To all those who knew him Ken Handler was a wonderful father, a loving husband . . . But there was another side to Ken…”

Ken was a closet gay who died of The AIDS.

Ken died from a brain tumor

I don’t know how he died.  But I know he did.  I met the man that dug his grave.

Ken’s funeral was held in this chapel in Hillside Memorial Park, LA. 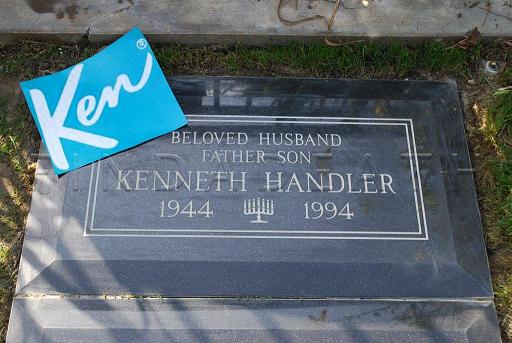 The  Del Rubio Triplets with their Barbies.  God love ’em. 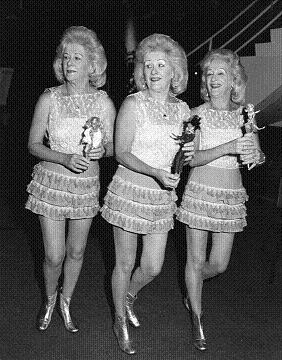