I hate the living

It’s odd to try and sum up one of your closest friends in a few sentences. Laer was a great guy. Laer was a jerk. He was funny as hell, opinionated as hell, we got along great, and we hated each other’s guts.

I first met him in 1994 through a mutual friend, Jody, here in LA. Because we were both “in” to death, Jody thought we would get along. We didn’t.  At. All.  The first time we went out, I was a bit crabby and moody (so what else?) and Laer dropped me off, hoping never to see me again I’m sure.  I know that’s how I felt.  So somehow we hung out more through Jody’s influence, and we became friends. 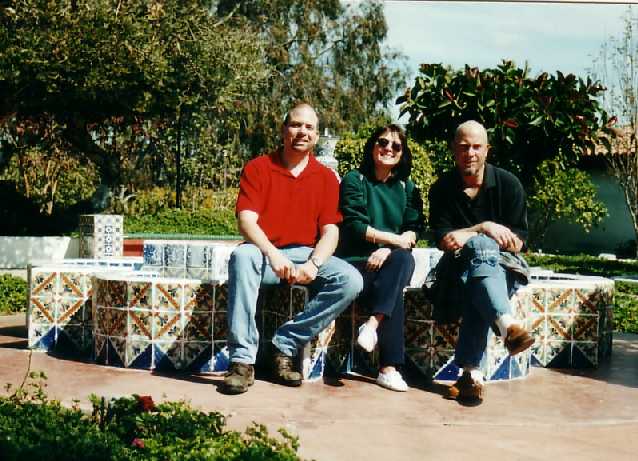 We had little in common. In fact, we often discussed our lack of anything in common, usually over cocktails, which is probably what we had in common. That and smoking.  Smoking and drinking with Larry was the best.

We were great drinkers. The Detour in LA was a favorite haunt, and we also liked exploring new drinking dumps. 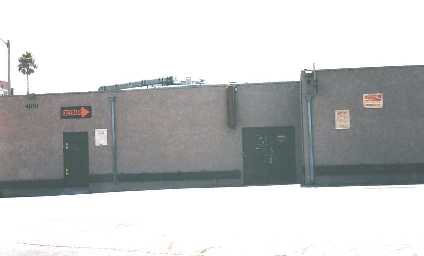 And holes they usually were, but that was half the fun of it. Laer also really enjoyed going with me on my Findadeath photo shoots. He was really pleased to have been the one to encourage me to go to the basement of the new cathedral downtown where we found Gregory Peck buried there.

See, he was into architecture, and I couldn’t care less.  He said, “Let’s go see the basement.” I rolled my eyes and thought, “Oh brother, let’s throw him a bone,” and went, realizing later how right he was. It’s just the way we were with each other.

Laer lived in an area called Koreatown.  It’s rot really known as a nice area, his building was some old Consulate. It was beautiful. 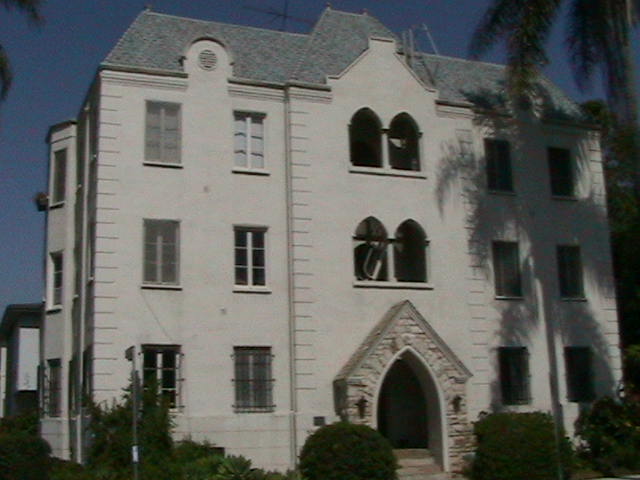 When people would ask where he lived, he would reply, “Hancock Park,” which is the pricey area nearby, meanwhile shooting me a dirty look to keep my mouth shut, because I would always roll my eyes and ask him when he moved to Hancock Park.

I moved to London in 1996 to pursue my own life and interests, and Laer stuck it out here. Apparently he was quite upset with me for leaving. I was upset too, but knew I had to get on with it. He did come to visit me while in London, and we had a great couple of weeks. 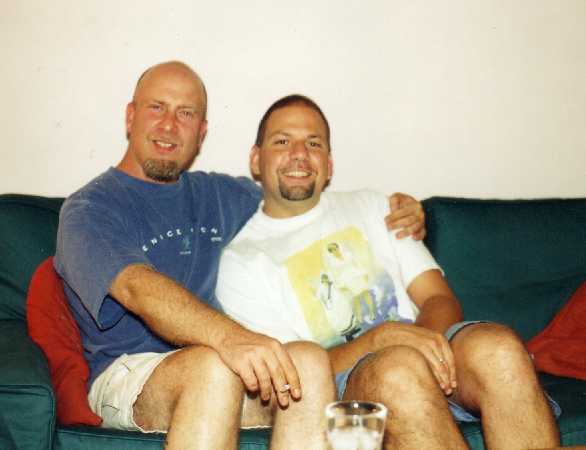 Another thing I should clarify is that while I was away London,  Larry for some reason was now referring to himself as “Laer.”  Not legally, that’s just how he introduced himself to people.  When I questioned it, he shot me the look again and responded, “It’s celtic.”  Eyeroll.

When I returned to Los Angeles in July of 2002, Laer and I continued hanging out, mostly in the bar at a restaurant called The Silver Spoon (RIP).

Laer was a serious drinker and although I would be considered one as well, for some reason watching my friend self-destruct was difficult for me.  I wanted my life to be more than that.  We had some sort of argument and I stopped speaking to Laer for a few months, just telling him that I wanted to get my own shit together.  I didn’t want it to be all about drinking.

Just after Thanksgiving 2003, a mutual friend named Penny called me to let me know that Laer was in Cedars Sinai with pneumonia. 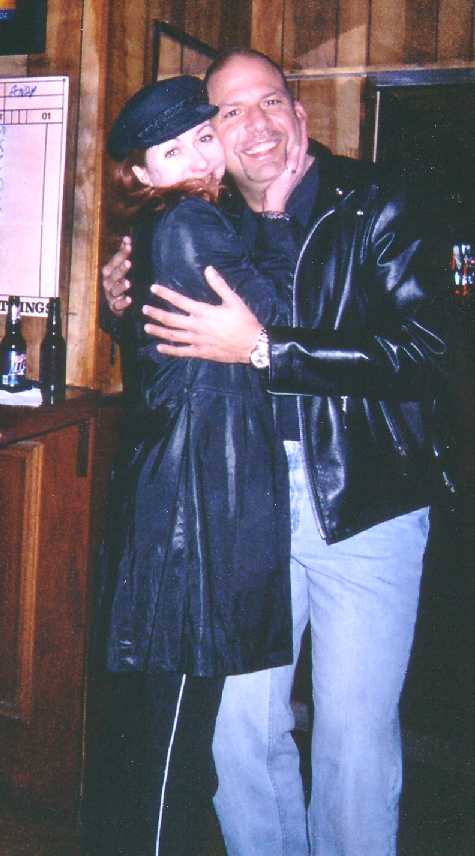 Penny Nickels (RIP) and I at The Silver Spoon.

Larry was in a coma. I went to visit but he had no idea I was there. My conscience played up and I visited more.  When Laer “recovered” and was finally released, we resumed our friendship.  I knew Laer was not quite himself any more, though for a while he seemed to be on the mend, but I could tell there was a lot on his mind.  Physically he was quite defeated, but every once in while there was a spark of the old Larry and all would be right in his world.

Some people who considered themselves friends with Larry, gave me some grief about resuming our “bar hopping ways” after Larry was discharged from the hospital.  Feh.  It’s not their issue.

Penny, took the last picture I have with Laer, while we were comparing tattoos.  I’ll treasure this. 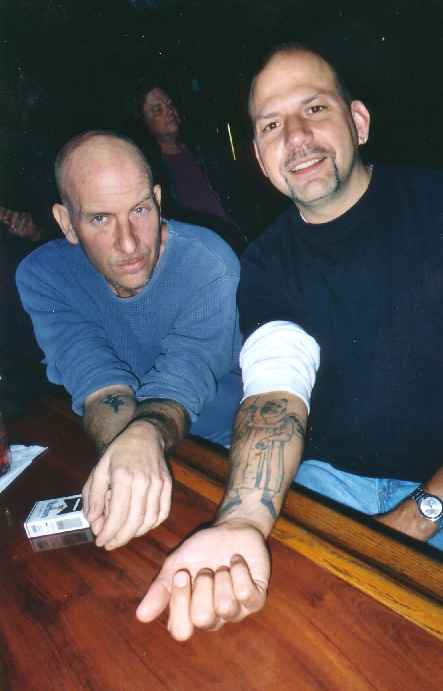 The last time I saw Laer was on Monday the 8th of March, 2004. I picked him up and we ran some errands. We didn’t speak much as he was pretty weak. I took him to lunch at Philippe’s downtown. He had a pork sandwich, pickled egg and macaroni salad. Philippe’s is good. 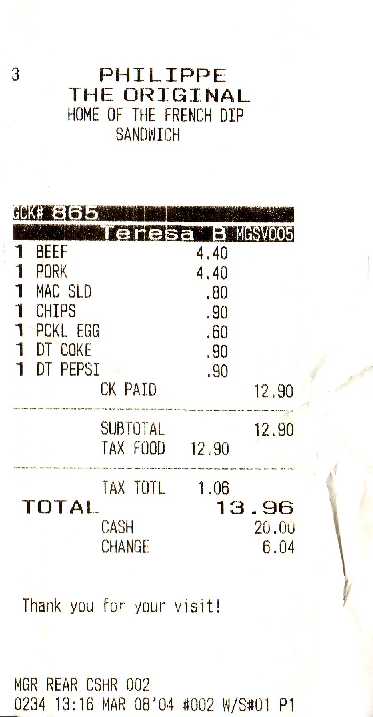 After that, I dropped him off at his apartment. 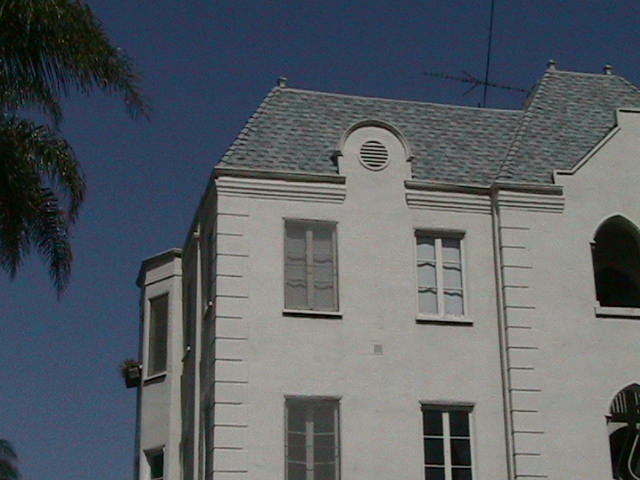 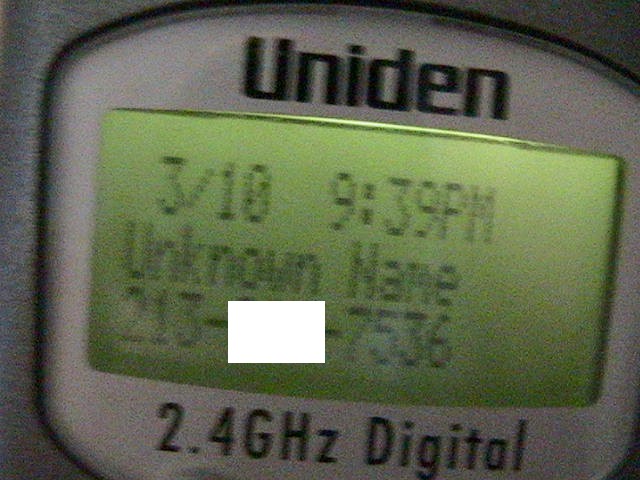 We only spoke for a minute – just the usual, “Hi, I’m not dead,” phone call that he did pretty often. I didn’t know it, but it was the last time I would ever speak to him.

I’m pretty sure that Larry was settling with the prospect of dying (as long as it wasn’t spontaneous human combustion.  That scared the shit out of him).  He was readmitted to Cedars (he phoned the ambulance himself) and upon being admitted, it was found that he was heading for complete organ failure.  He was in the respiratory intensive care unit at Cedars, in a coma and on life support. 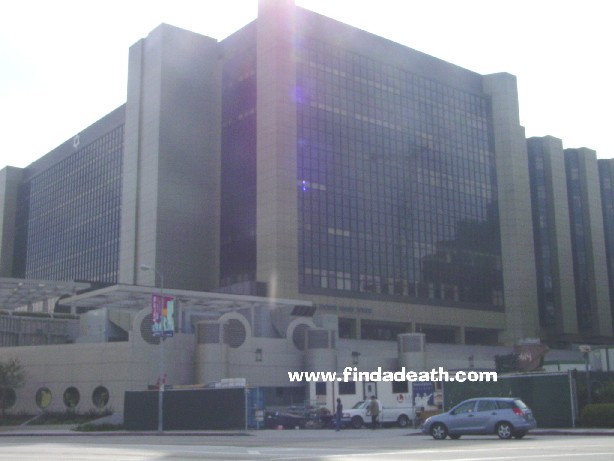 On the 15th of March I was told that Larry wasn’t doing well.

Larry’s good friend Theresa and I went to his room.  At 3 p.m. his life support was turned off.  It took a little more than two hours, but at 5:20 p.m. he died.  We were with him.  We each held one of his hands, and I encouraged him to go.  Please! haha.  I don’t know what I expected to happen, but he just… died.  No bells and whistles – he simply drew his last breath.

It’s so weird when someone close to you dies.  You look around at people passing by, traffic lights still working, cash registers still ringing… and you wonder, “How can you not know!” 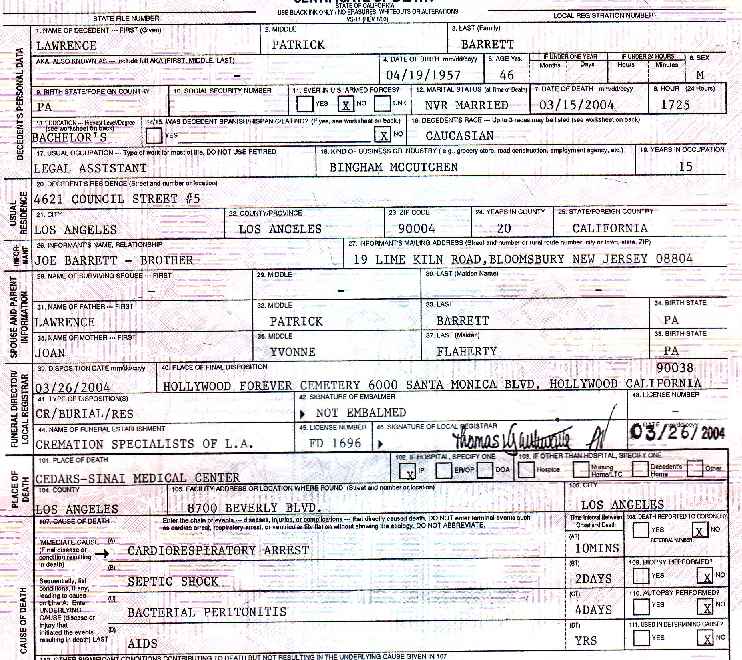 I paid 10 dollars to park and sit with my friend while he died.  I am honored to have done it. 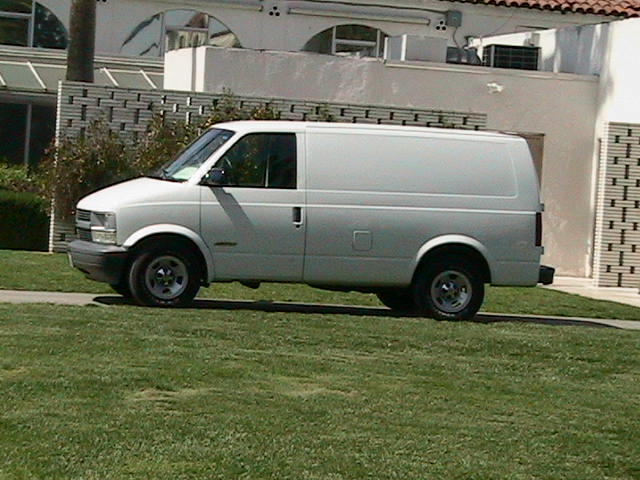 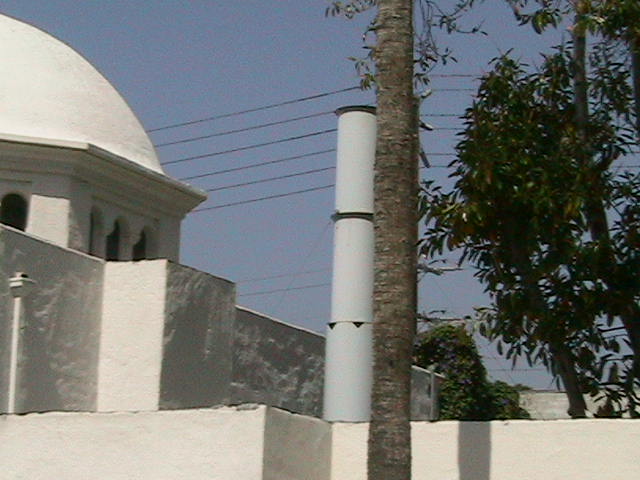 Larry and I would often talk about what we wanted done with our remains. We even spoke of getting a joint niche with Rockem Sockem Robots for urns because of our fun/shitty relatinoship. 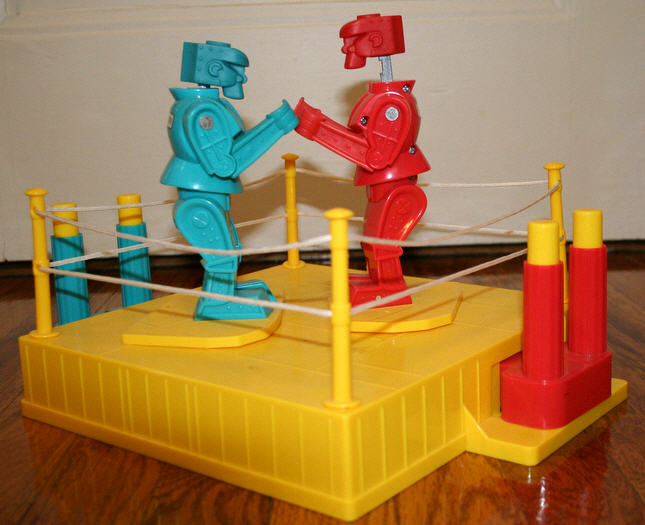 A bunch of friends ended up buying Larry a niche, 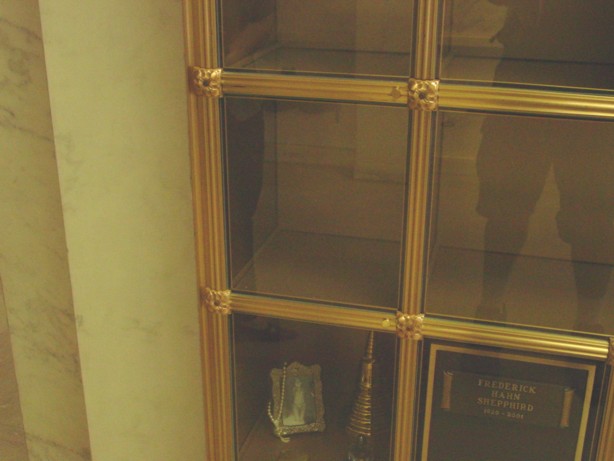 and I bought one for myself, appropriately at the opposite end of the same row. 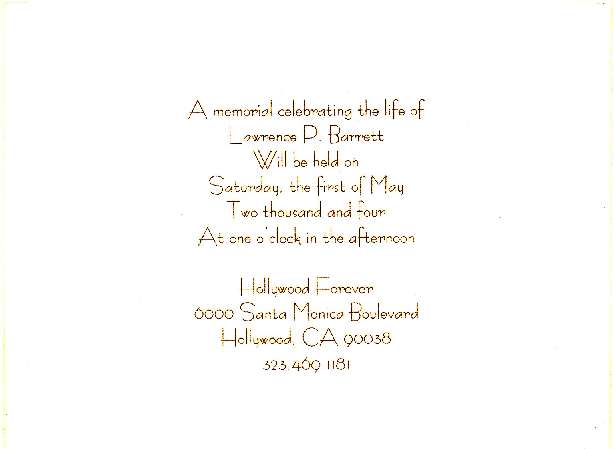 A memorial was held on May 1, 2004 at Hollywood Forever.  Several friends helped decorate his final home.  We laughed like hell, and posed for pictures. 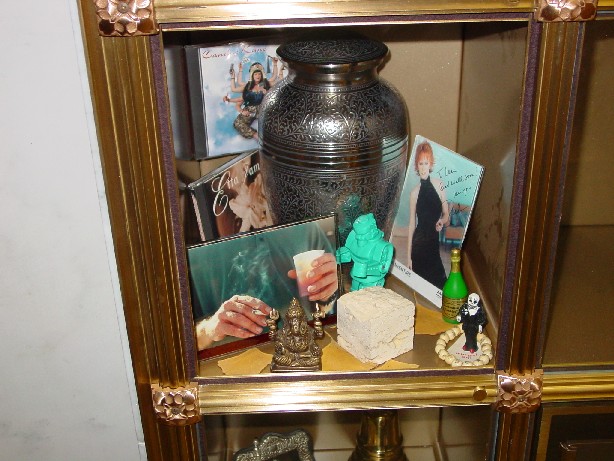 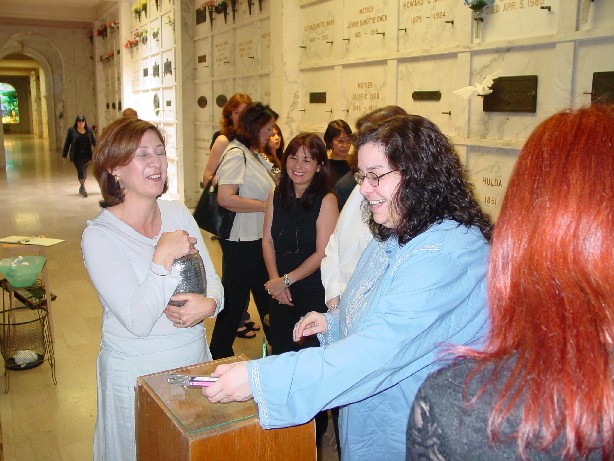 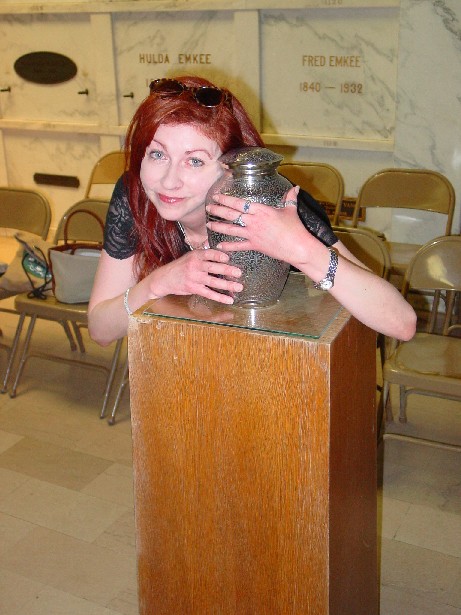 and they sealed him up. 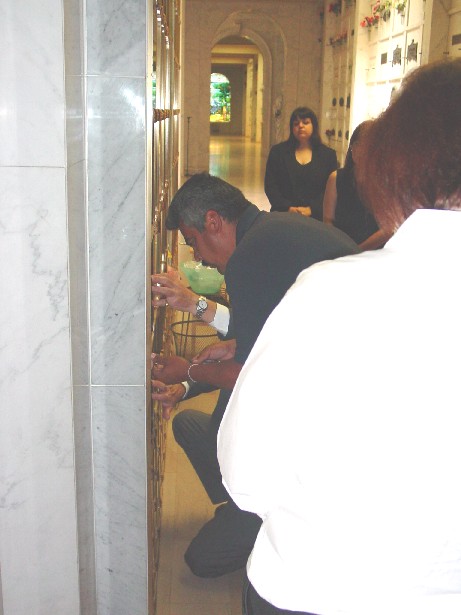 After making sure Larry could not ever get out of his grave, we gathered to eulogize. 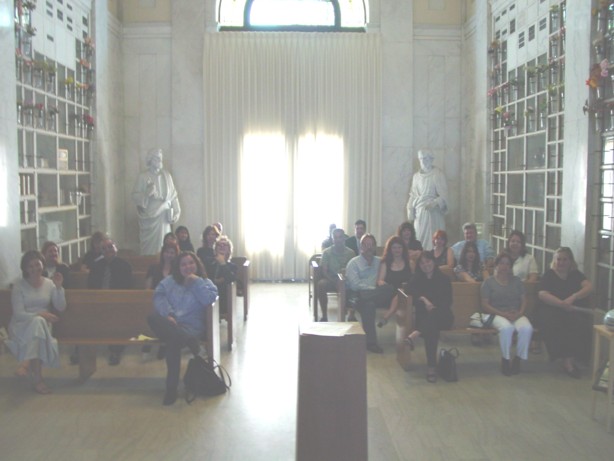 Larry’s friend Linda (RIP) stood outside the mausoleum to ensure our privacy.  She commented on how nice it was to hear so many people laughing.  We should all be so fortunate.  I learned a lot about my buddy that day.  Good things.  Afterwards, some went to the El Coyote and ate, others like myself went to the Silver Spoon and got totally trashed.

I have my own portion of Laer (or Shaer of Laer) in my home.  A Ganesh statue that belonged to him is the one thing I wanted, and it was hollow, so I put him in it, but first removing a tiny shaer for my key chain.  Since our mutual friend Penny died, I have even more Laer to spare, so he’s now with other friends in our shop. 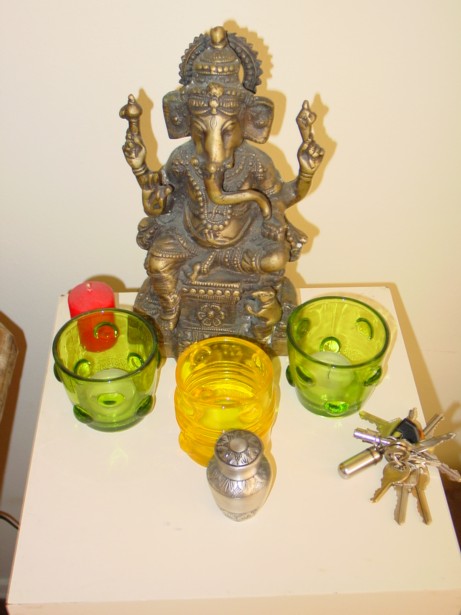 I know that Laer would be dead chuffed, to be part of this website.

Favorite memory:  Laer and I were driving in his little blue beater car that he called “the roach.”  We used to love to drive up and down the steep roads of Los Angeles, really fast.  On this day we were barreling down one particular hill, and his brakes gave out.  We were absolutely terrified, because the bottom of the hill was a cross street.  We made it thru the intersection unscathed, laughing hysterically the entire time.  That was the kind of relationship we had.

When I wrote this original article he’d been gone exactly 24 hours.  I still miss you,  buddy. 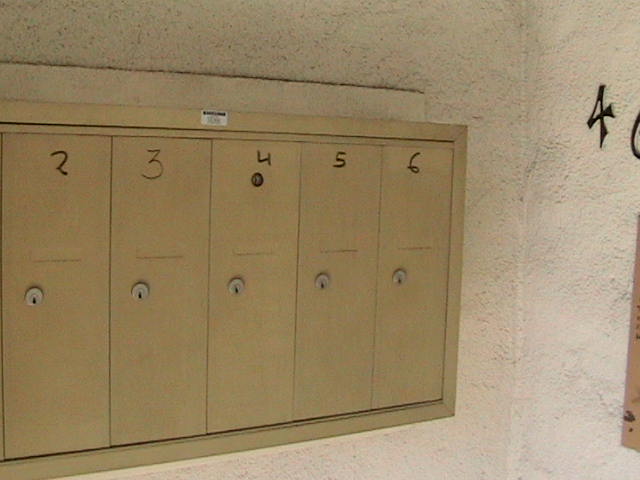 More:  Laer always ate lunch on the weekends at the El Coyote.

More:  Laer’s favorite song was Smiling Faces Sometimes by The Undisputed Truth.  I made sure to play it at his memorial.  You see, Larry… he never forgot anything.  He might black out, but if you wronged him, he never ever forgot.  I think some of the people who showed up to the memorial were a little uncomfortable with themselves while listening to the song.  Good.

I picked a rough month to quit smoking, but I did.  It’s been three weeks now, and I’m done.  Why Allan Carr doesn’t get more attention, I’ll never know.  No scare tactics, just common sense, and in a 3 hour online course.  Thing is, you have to want to.  I do.

March 2008:  This week is Laer’s 4th anniversary.  I still don’t smoke (though I’ve porked), and some Death Hags and I went to Phillippe’s last Sunday.  To acknowledge my dead buddy, I brought his cremains with me, and had a beer in his honor, and tasted a pickled egg.  vile.