Excuse me, ma’am, you can’t come in here.

Ok, so we know Phil has a room reserved for him at the Hoo Hoo Hotel. The guy has serious problems. I was dying to read Ronnie Spector’s (Phil’s ex wife, and former lead singer of the Ronettes) autobiography a couple of years ago, so I bought it when I was in London. Then I left it in a pub called Half Way to Heaven. Luckily, thanks to Findadeath friends, I have a new one, and can’t wait to dig in. But I still think Ronnie Spector is ultra cool. Murder and madness aside, I think Phil is too. I mean, he’s produced some amazing music in his life, the last being the End of the Century album by the Ramones (bow appropriately here), one of my all time favorite groups. He’s also done stuff with The Beatles, The Ronettes, the Crystals, The Righteous Brothers, etc.

How things came to happen on the night of Sunday February 2nd, 2003. One thing for sure, according to the experts, we found out that day that there are six weeks of winter left. Phil had dinner at a celeb hangout on Santa Monica Boulevard, called Dan Tana’s. 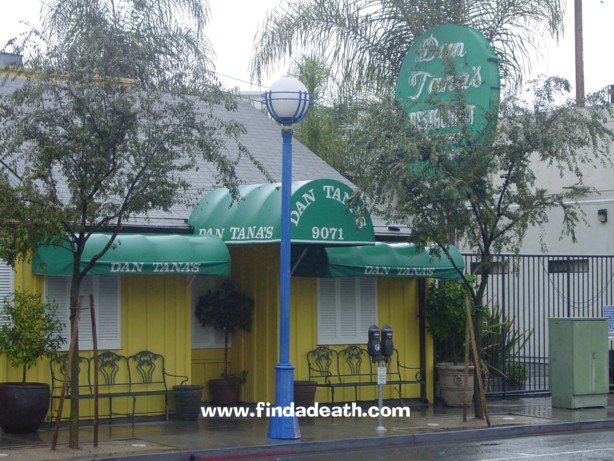 He got there at about 12:30 a.m. Apparently, Phil had a history of drink and drug problems, and was on the wagon for a while. That’s why it was unusual for him to be imbibing this night. The bartender noticed this fact, and questioned it, but all seemed fine. By the way, Phil was there with another blonde woman, not the victim. They left about 1:45a.m., leaving an enormous tip, and headed over to the House of Blues – just in time for last call. 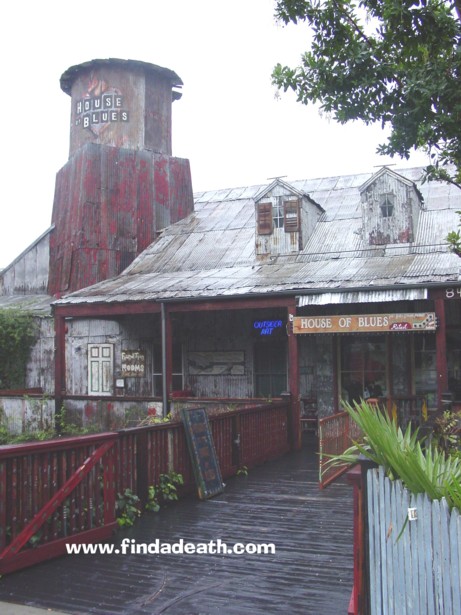 They arrived at the House of Blues after a 5 minute drive, and no doubt left his chauffeur driven Mercedes here, 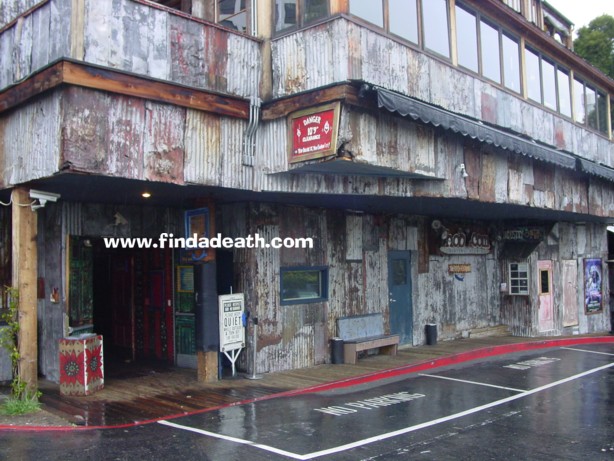 and headed up to the VIP area within, called the Foundation Room.

Lana Clarkson was a hostess there, and had only been working there a little less than a month, and she “escort”ed him to his table. Lana was a B movie actress. Big blonde hair, big tits – you know the routine. Apparently she was very well liked. Spector certainly did. She didn’t recognize him, and actually refused him entry thinking he was a woman. “Excuse me ma’am, you can’t come in here.”  Someone pulled her aside and explained who “she” was, and Spector was allowed in.  Phil’s friend left around 2, and he invited Lana over to where he was sitting. No doubt they talked a lot. I know if it were me, I would have been jabbering away out loud, not having any idea what I was saying, and thinking “Oh my God, I’m talking to Phil Spector.”

UPDATED SEPTEMBER 2003: Steve Goldstein of www.beneathlosangeles.com came up with a bit more research for us.  Turns out that Lana was living in this modest little home (with the rent hiked up to your eyelids) on the canal in Venice. 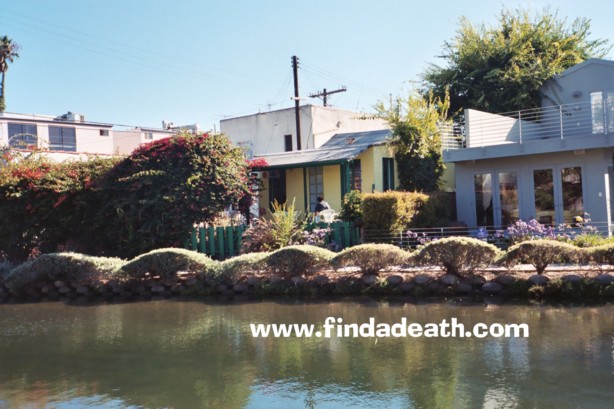 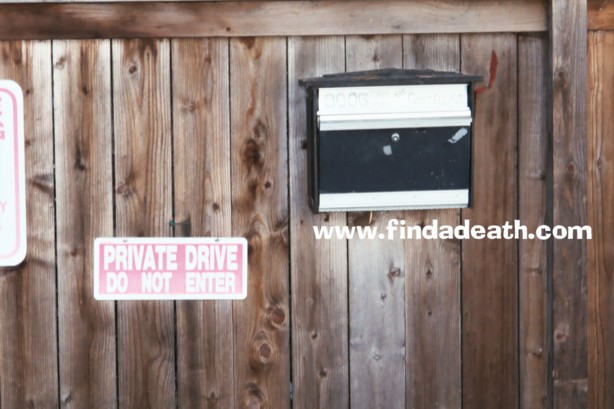 Lana operated her “business” out of this mailbox rental joint nearby.  #656 Thank you very much, Steve! 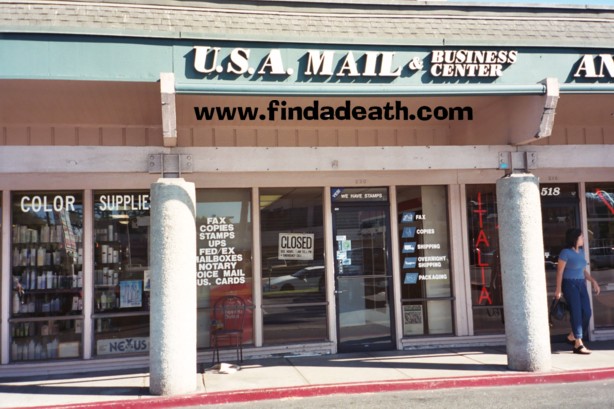 I hope someone investigates the House of Blues for serving booze after hours. I hate that. I was in there awhile back, bought 2 rounds of 3 drinks, vodka and rum – no name brands, the bill was 50 bucks. As soon as I ordered the second round, they started to scream at us to get the hell out. I hate that shit. They shove expensive ass drinks at you until the last minute, and then demand you leave immediately, unless you are in the private club. Go to Hell, House of Blues.

Anyway, they order an expensive ass bottle of champagne, and some bourbon, Lana finished work at 2:30 a.m., and they left together. They were dropped off at Phil’s house in Alhambra. 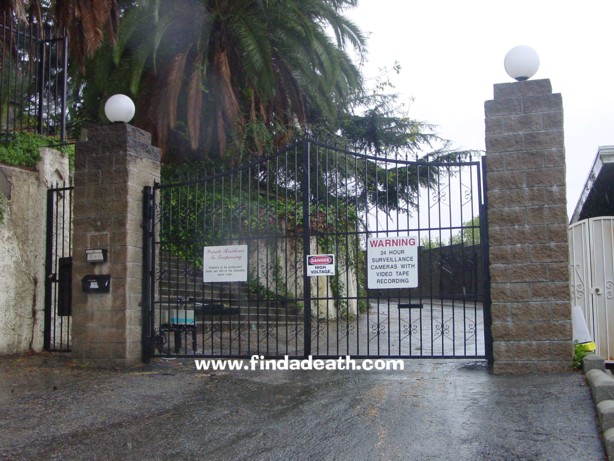 He bought the mansion in 1988, called Pyrenes Castle. 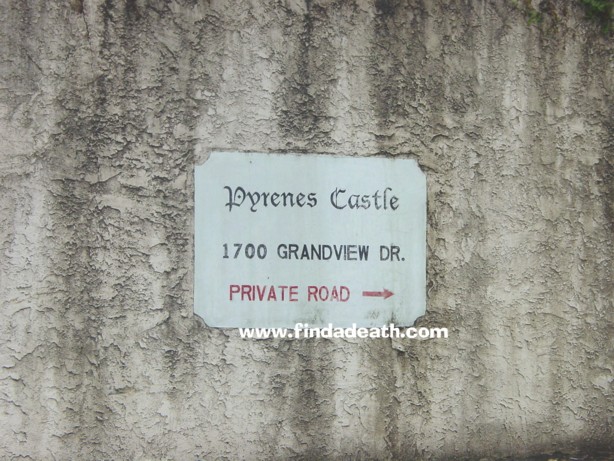 An enormous house located in an area of very average modest homes. 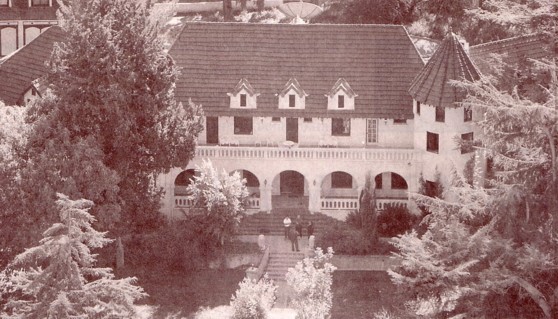 This is the only view from the road. 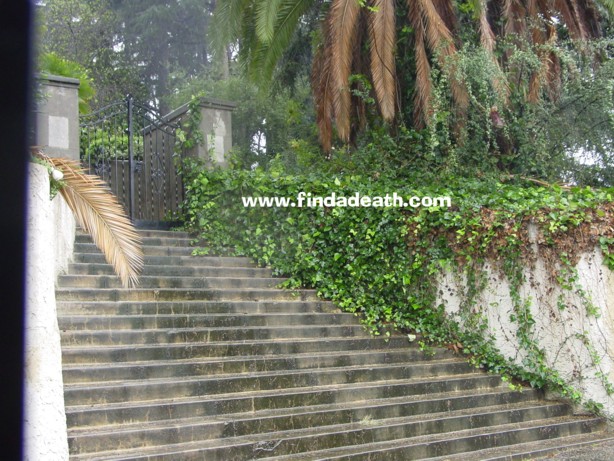 The information about what happened after that has not been available to the public. The chauffeur heard shots fired just after 5 a.m. A neighbor said they heard 3 or 4 shots. One thing for sure, Lana is dead. Phil was arrested and booked on suspicion of murder and freed on either $1 million or $1.7 million bail, depending on which nonsense you read. 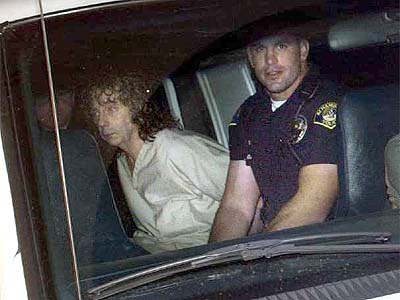 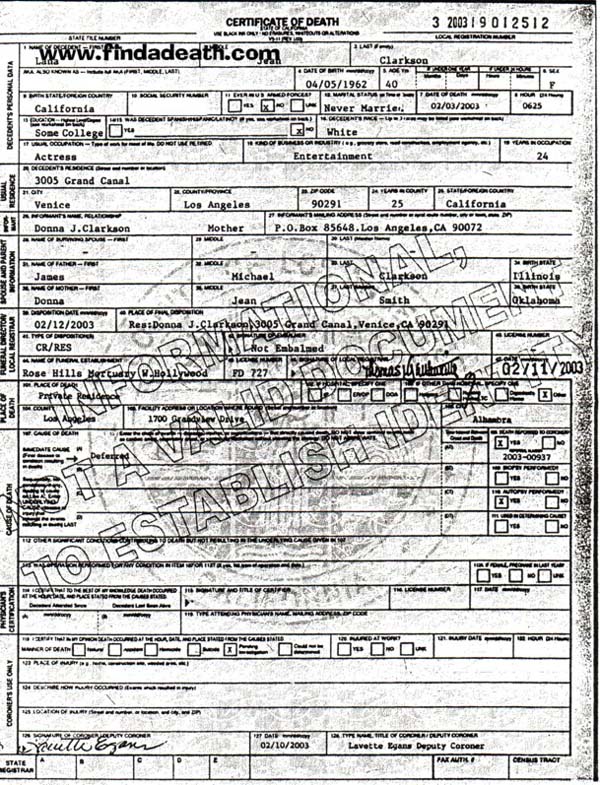 Thanks to Mike Steen for the death certificate.

There is plenty of insanity to read about Phil Spector and his behavior. Do a little search. Too much for me to deal with. This guy is crazier than a box of frogs. Robert Shapiro to represent. That’s all I need to know. Guilty.

Findadeath friend Jimmy sends this:  March 7, 2003 — Slain actress had a ‘thing’ for guns.
LAST month B-movie actress Lana Clarkson, blond, age 40, was killed. Shot in the face allegedly by music producer Phil Spector, 62, in his Hollywood mansion. It happened in the wee hours following what has been categorized as a boozy night. Spector, out on $1 million bail, was booked on suspicion of first-degree murder.

The man’s wild past includes alcoholism and psychiatric problems. And a penchant for guns. More than one gun was found at the scene. This has been reported.

Not reported until now is that Clarkson, who was then working as a hostess at the House of Blues night spot, also had an interesting history. She had a huge sci-fi fan base. And she well knew about guns. She’d handled them. She’d in fact actually had professional training in their usage.

Her onetime PR man Ed Lozzi has been in touch with the L.A. Homicide Division. He is on record as informing the chief investigator in the case, Lt. Dan Rosenberg of the Los Angeles County Sheriff’s office, that Lana Clarkson “was knowledgeable in the use of firearms and other weapons including crossbows and bow and arrow.”

Her expertise with firearms adds to the mystery of this sordid experience.

Thanks for the info, Jimmy!

Record producer Phil Spector emerged from his California mansion with a gun in his hand and said, “I think I just shot her,” his driver told police shortly after a B-movie actress was found dead in the foyer. Lana Clarkson was sprawled on a chair, her teeth and blood spattered about the room from a gunshot wound to her mouth when police arrived at about 5 a.m. on Feb. 3.

Lana was in a black nylon slip/dress, black nylons and black shoes.  She had a leopard print purse, with a black strap, and it was over her right shoulder.  Always a mistake.  Her broken teeth were scattered about the foyer and an adjacent stairway.”

Underneath Clarkson’s left leg was a blood spattered blue steel, .38-caliber Colt revolver with five live rounds and a spent cartridge under the hammer.

Investigators also found blood smears on the back door handle and on a wooden stairway railing near the death scene, he said. A blood-spattered man’s jacket was recovered from an upstairs dressing room, and a blood-soaked cloth was found on the floor of a bathroom next to the foyer.

In the adjacent living room, candles had been lit atop a fireplace mantel and a partially filled brandy glass and bottles of tequila and soda (trash.) stood on the coffee table between two sofas.  They spent about an hour and a half in the mansion before the shooting, having arrived there at 3.30 a.m.

March 04: My buddy Steve from www.beneathlosangeles.com went poking around Phil’s place the other day, and snapped this new picture of the sign in front of the place. 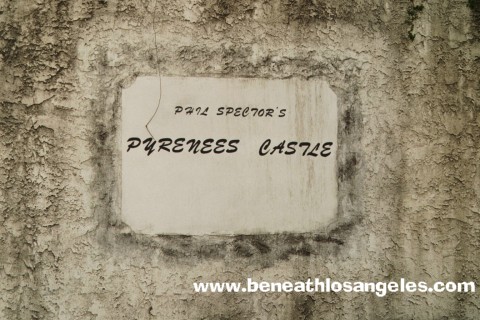 Apparently, for some reason, Phil has to piss a circle around his home now.  Great shot, thanks Steve!

June 07: Supposed factoid that emerged during the trial:  the judge in Spector’s murder trial rejected an attempt by the music producer’s lawyers to introduce Lana Clarkson’s writings about living in a home where an actress committed suicide in the 1930s.  They never mention a name, which is why I think its nonsense.  I may be wrong, but I wait to be proved wrong.

I’m honestly not following this trial as much as I thought I would.  I’m dipping in with the daily blog my friend Brian sent me from the LA Times.

Findadeath friend Jenny sends this:  He’d been drinking at Dan Tana’s and Trader Vic’s before going to the House of Blues.

Clarkson refused him admission to VIP area before being told by management to treat him “like gold.”

He got 50,000 volts from police Taser gun after failing to remove his hands
from his pockets.

Spector, “What’s wrong with you guys?  I didn’t mean to shoot her, it was an
accident.”

In an email to friends shortly after the shooting referred to it as accidental suicide and then told Esquire magazine, “She kissed the gun.”

The gun was not registered to Spector unlike many other weapons in the house.

He was on seven different prescription drugs.

Lana Clarkson was a children’s entertainer and in 1991 she fell over a rug at a children’s party and broke both hands and wrists (ouch!) (echoes of William Holden) causing depression but at time of death she had plans for a new career.

Wow Jenny, my kind of fact finding.  Thanks! 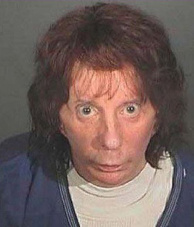 APRIL 13–Phil Spector, the fright-haired music producer, was convicted today of second-degree murder in the February 2003 death of Lana Clarkson, a struggling actress who died of a gunshot wound in Spector’s Los Angeles home. The 69-year-old Spector, who faces 15 years in prison, was immediately taken into custody after a Los Angeles Superior Court jury returned its guilty verdict. Spector is pictured below in a Los Angeles Sheriff’s Department mug shot taken today.

Feb 2015: Some nice soul furnished us with a Death Hag Sticker marking the MURDER location of Lana Clarkson, aka Phil Spector’s house. Thank you, nice soul. I’ve lost the paper trail to this one. 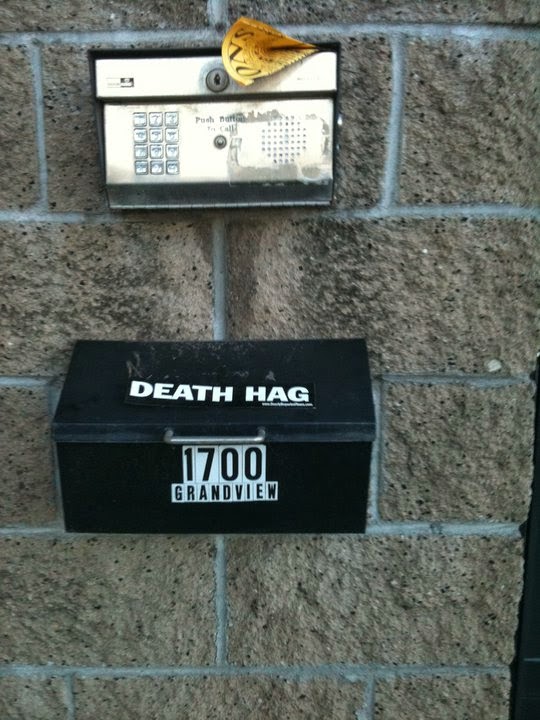