I knew there was an old axe down cellar…

Lizzie Borden, a handsome woman, was born July 19, 1860 in Fall River, Massachusetts. She was charged with murdering her stepmother and father- and her trial became a national sensation in the United States. Her father, a rich banker/real estate mogul and miser (who refused to add plumbing to their home.  “LIZZIE!  Your turn to rinse the honeypot!) was a widower and took a 2nd wife named Abby when Lizzie was three and her older sister Emma was 12.

Lizzie never dated, but was popular and active as a Sunday school teacher and in her women’s social clubs. As the sisters grew into spinsterhood, they found that their father was planning to reduce their inheritance and leave a real estate fortune to his wife. Lizzie and Emma were not happy. They stopped dining with their parents and began to refer to Abby only as “Mrs. Borden”.

A heat wave struck July 1892, and the sisters went separately to cooler resort towns. In August, Lizzie left her friends on Buzzards Bay and came back early to the family home in at 92 Second Street, Fall River, MA. 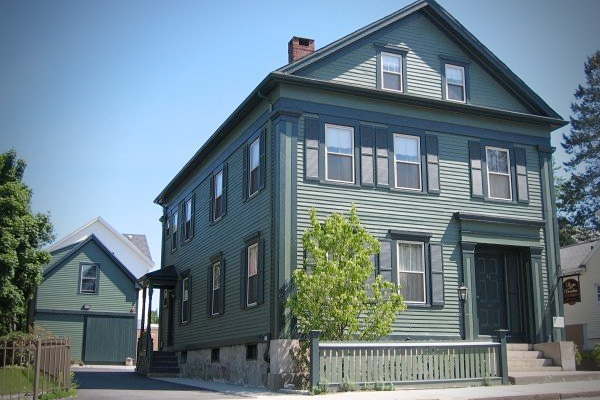 On the day before the murders, August 3, Lizzie tried to procure illegal cyanide. In the trial, the pharmacist’s testimony was excluded. On the same day, for the first time in 5 years, Lizzie had lunch with her parents (disgusting mutton leftovers). That evening she visited neighbor Alice Russell where she recounted stories about her father’s many enemies before returning home and going to bed.

Her Uncle John was visiting and helping her father with legal affairs. He was there to facilitate a transfer of the family’s summer home/farm to Abby. The next morning after breakfast (leftover mutton, flapjacks and fruit) the men left for work. Stepmother Abby was due at the bank later that day to sign papers as the new deed holder of her husband’s farm.

While Bridget the maid was reportedly washing windows (instructed by Lizzie) and Lizzie was reportedly sewing and ironing, her stepmother Abby was killed at 9am while making Uncle John’s guest room bed. Her head was almost chopped off.

Andrew came home at 10:30am for a mid-morning nap on the parlor sofa and was hacked in the face while Lizzie was reportedly in the barn eating pears – and Bridget was in her room resting. 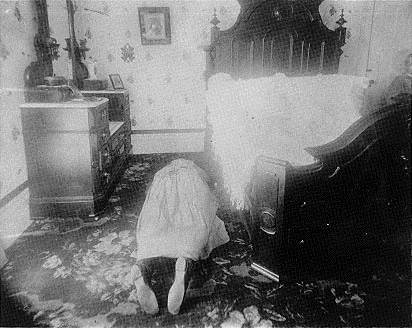 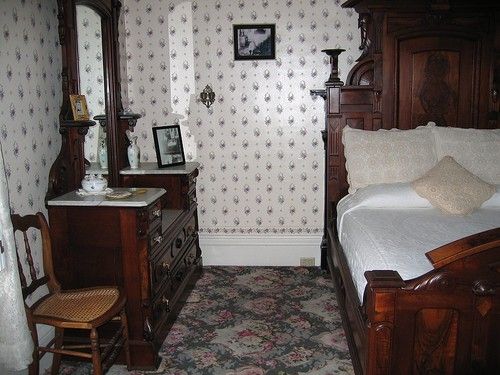 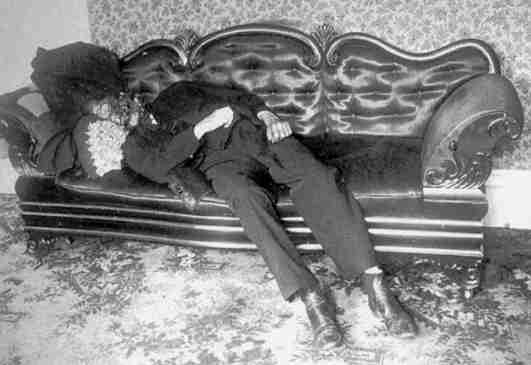 Lizzie screamed for Bridget at 11:15am upon discovering dead Daddy. Neighbors and doctors were summoned. Abby was discovered upstairs after Lizzie told neighbors she “felt” her stepmother had been killed too. (Yup, She was correct!)  Lizzie slept in the house that evening – while her father was autopsied on the dining room table.

Many became suspects in the press including Bridget the maid, Uncle John, Lizzie’s Sunday school student, and another convicted axe murderer who was around town. They were all dismissed.

An axe  was recovered in ashes in the family’s basement and 3 days after the murders, Lizzie Borden burned one of her light blue dresses, claiming she had spilled paint on it. But none of the witnesses from the day of the murders could agree which dress she had worn that day. Lizzie was arrested and tried for both murders in June 1893 but was acquitted, due to a lack of substantive evidence. Lizzie’s “dream team” included attorney George D. Robinson, a former Massachusetts Governor.  The jury was sequestered for 15-days and took just one hour to make a decision. Most refused to believe a wealthy, proper Sunday Schoolteacher would kill her parents. Major newspapers and feminist clubs were critical of her arrest.

Lizzie inherited half of her father’s estate, and bought a mansion for herself and Emma in Fall River’s best neighborhood- the Highlands- which she dubbed “Maplecroft”. 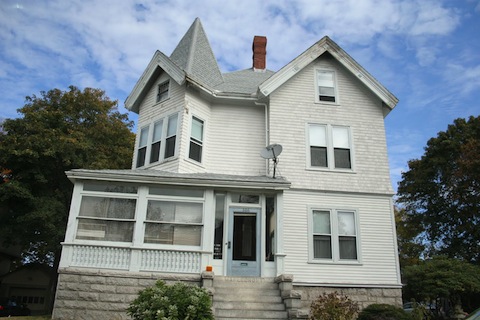 The mansion at 306 French Street  had 14 rooms including 6 Bedrooms, a library, billiard room, 3 full baths and 2 half  baths. Impressive woodwork, detailed mantles, mahogany cornice trim, beamed ceilings, wainscoting, 6 fireplaces, Italian arches, stained glass windows and an impressive rear shade porch overlooking the garden. There were bars on the cellar windows and a locked front gate. Lizzie owned both houses on each side of Maplecroft for her attending servants.

Lizzie was ostracized by her local church and ladies clubs and became reclusive. She changed her name to “Liz Beth”. The name Lizzie Borden was back in the press in 1897 when she was accused of shoplifting some art work – this was settled out of court.

She eventually found she enjoyed being surrounded by “show people”, bohemian theatre pals from Boston and New York, who she would entertain at Maplecroft into the wee hours. Lizzie also became very enamored with actress Nance O’Neil. Many assume that it was her sister’s company or lifestyle that drove disapproving sister Emma away. Emma abruptly moved from the mansion in 1905 and settled in  Newmarket, New Hampshire where she died (just 9 days after Lizzie).

After her sister’s departure, Lizzie lived with her canaries and Boston bull terriers and devoted housekeeper, Hannah Nelson who slept on the third floor, within easy call of Lizzie’s second floor bedroom.  Lizzie’s health declined after a gall bladder operation and she died at her home at age 66 from pneumonia on June, 1st 1927 (Marilyn Monroe’s 1st birthday). Lizzie passed away during the roaring 20s- when women were enjoying new freedoms of the Jazz Age. She had happily seen the world change in the decades since the oppressive Victorian era of her youth. 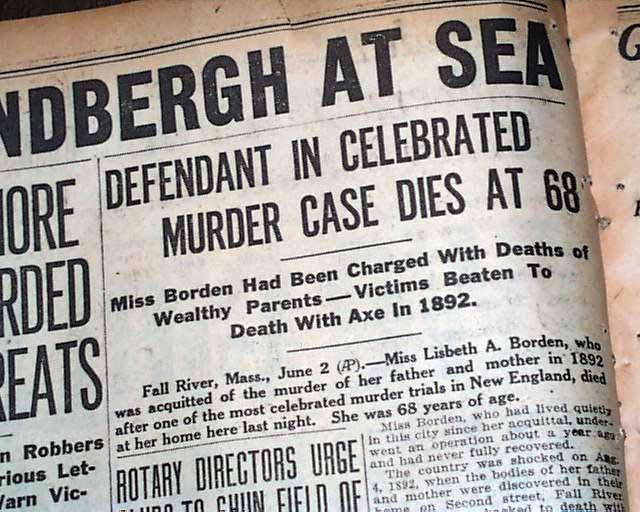 Lizzie left handwritten instructions on how her funeral was to go down:

My funeral to be strictly private with a short prayer at the grave.

At the house I wish read “The Crossing of the Bar”.

Also sung the first and fourth verses of “My Ain Countrie”.

I wish to be laid at my father’s feet.

A small head stone to match the others of my family.

Lizbeth to be cut on the stone.

The minister of the Church of the Ascension is to conduct the services.

Grave to be bricked.

Many theorize that Lizzie was buried at Oak Grove Cemetery with no guests in attendance, then had a few friends attend a memorial back at her home. 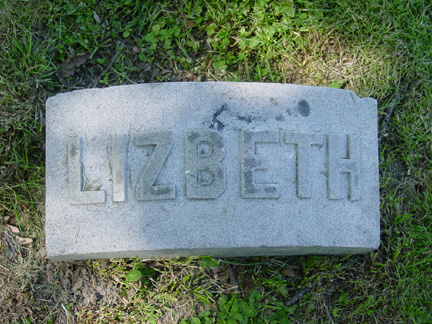 Mrs. Vida Pearson Turner, a popular Fall River church choir singer was interviewed in 1979 and said she had been asked (by the undertaker) to come to the house on French Street to sing In my Ain Countrie.   Mrs. Turner said: “I was summoned to sing. The undertaker unlocked the door, let me in, and locked the door immediately. I was ushered into a room, sang the song (by the fireplace in an empty room), and was then ushered out. The undertaker told me, ‘Go straight home and don’t tell anyone where you have been.’ And I kept that promise for many, many years.”

It was Lizzie’s favorite hymn, the title of which had been carved into the fireplace mantel of her bedroom following her acquittal in 1893.

I am far from my home, and I’m weary after while,

for the longing for home bringing and my Father’s welcome smile.

And I’ll never be full content, until my eyes do see,

the golden gates of heaven, and my ain countrie.

My sins have been many, and my sorrow has been sore,

but this day they’ll never vex me, nor be remembered more.

For His blood has made me white and His hand shall dry my eye,

When He brings me home at last to my ain countrie.

Lizzie left a few personal items to friends and the bulk of her estate to the Animal Rescue League.  You can read her will here.

The directions to the Borden family plot are marked with arrows for Fall River tourists.

Her father’s skull and court documents are on display at the Fall River Historical Society and her childhood home and site of the murders is now a thriving Bed and Breakfast.  The people there could not be nicer.  Tell ’em Scott sent you. 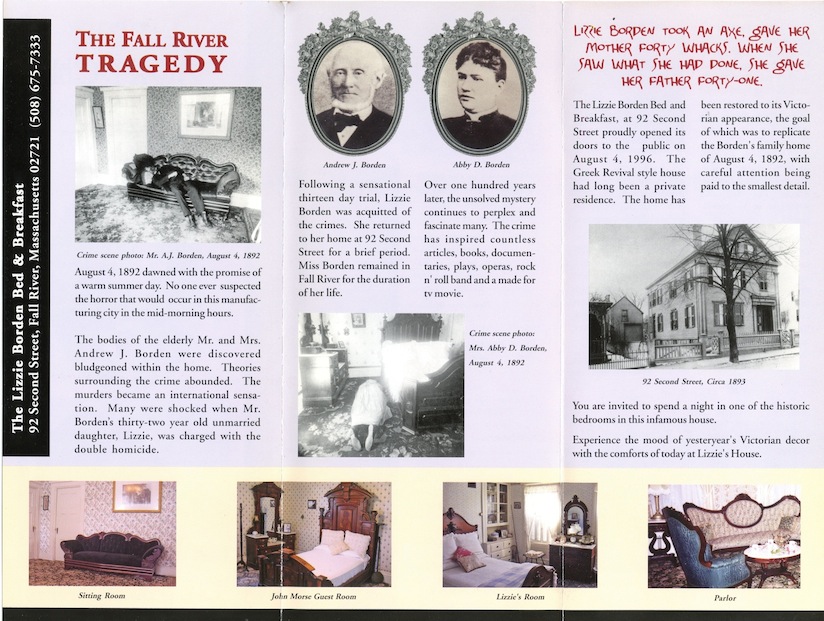 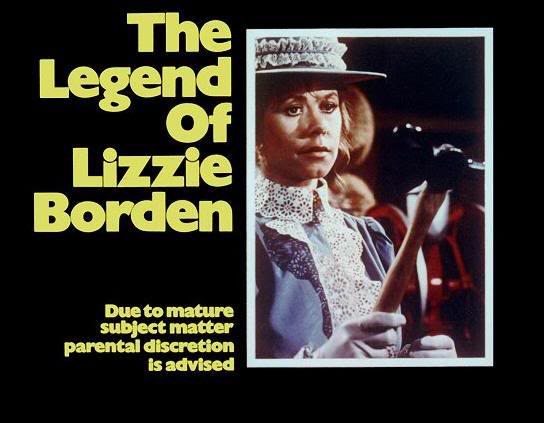 Here is Chloe posing on the Daddy exact replica death sofa at the real murder house. 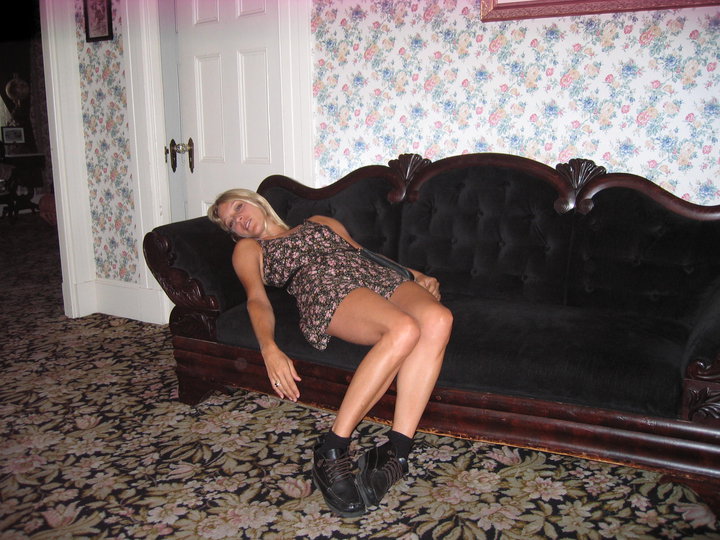 Here are 14 reasons that Lizzie was the one who gave her parents those fatal wacks. 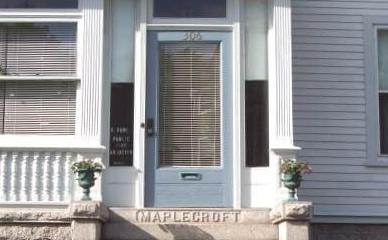