She wrote the book “Gone With the Wind” and that’s all you really need to know. Except for how vile her museum is.

She lived in Atlanta, and wrote the book while living in a basement flat of this house. 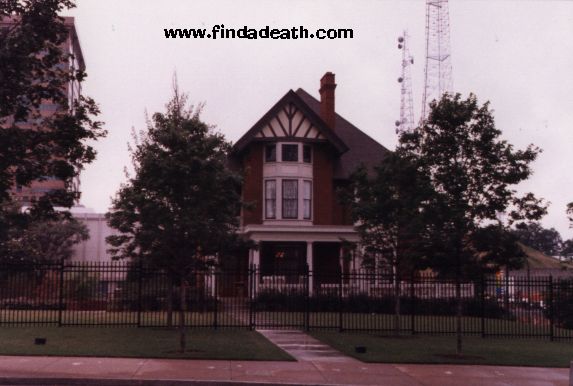 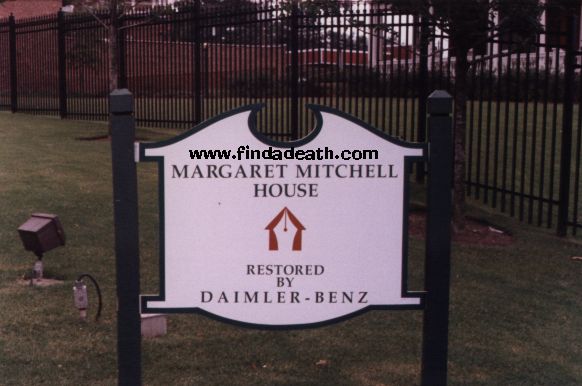 Seems that Daimler-Benz put a ton of money into it, and some vandals burned it down a couple of times. Wonder why. They finally were able to restore it again. Tourist trap much?

Now, can I just say, I’ve been there. This museum was probably the single dullest thing I have ever experienced. First they make you pay 7 bucks to get a ticket. 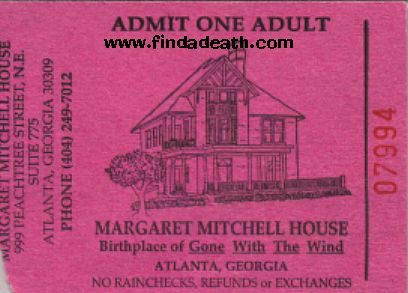 Then they give you about an hour to see the 4 or 5 photographs they have blown up to 10 feet by 10 feet, just to make them interesting. Then, and we weren’t prepared for this, it was story-telling day. Oh. My. God. We should bolted immediately, but we were (to use a Tenuta-ism) sucked into it’s gravitational pull. It was awful. We must have listened to this blind woman telling stories for 45 minutes. They were the longest, most boring stories you can imagine. I shudder when I think about if for too long. IT WAS AWFUL. I have no problem with disabled persons, but you would think that her inability to see would have made her more sensitive to where the people were in the room.  She proceeded to talk TO A WALL for most of the time. I cannot tell you a single story she told, they were that dull. And long. OhmyGod. Anyway, we were finally ushered into the building that Margaret Mitchell herself called, “the dump.” Need I say more? OF COURSE!

We were treated to a seven-dollar tour of “The Dump,” (I reiterate – their words, not mine) given by a woman who relished every nugget of dull information she had. Now, if you were going to take this tour, you WOULD want the guide to enjoy it too, right? That’s a given. It just wasn’t interesting enough. Dully dull dull. There was one horribly naughty bit (like when I was at band camp…) when we could peek around a corner of a door, and see a semi-nude picture of a woman. Mitchell reportedly put it there to shock people, so the museum staff put it back up for us. We were so desperate to see something interesting, that we looked. We blushed. Yawn. Anyway, this is where Maggie Mitchell wrote the damn book. 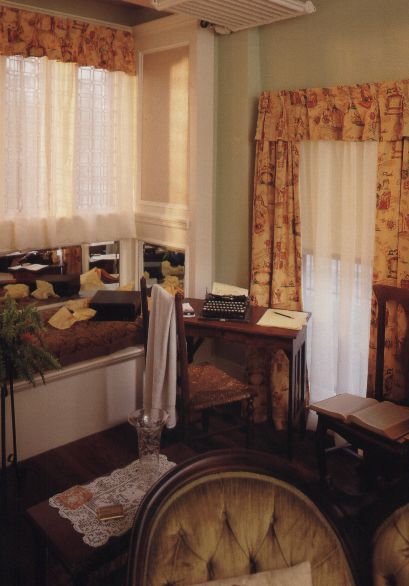 She finally saw the fricken light (and residuals, I’m sure), and moved into this apartment building on S. Prado. 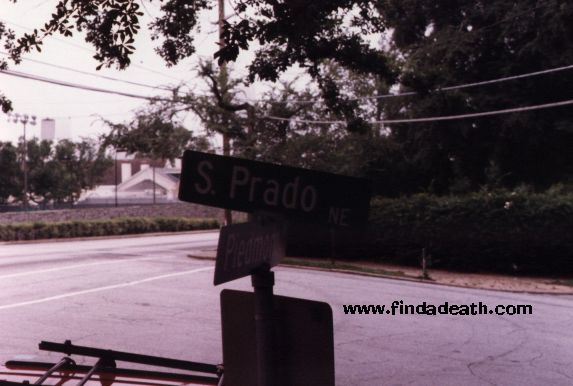 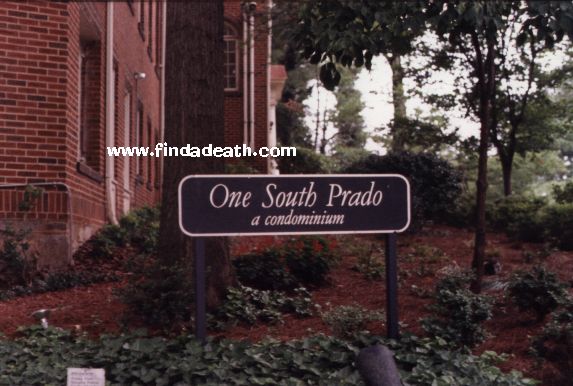 She lived in Apartment 4, which was just above the front door. 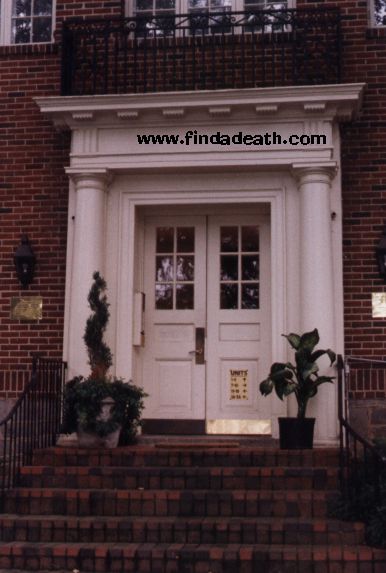 Here’s a shot of her windows. 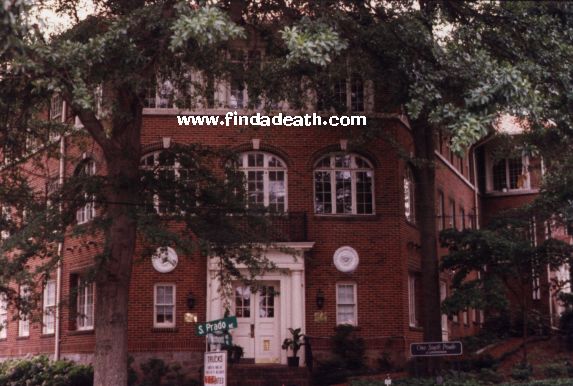 The Mag piece and her husband were going to catch a flick, but decided to stop for cocktails (atta girl!) at the Atlanta Women’s Club, on Peachtree Street. 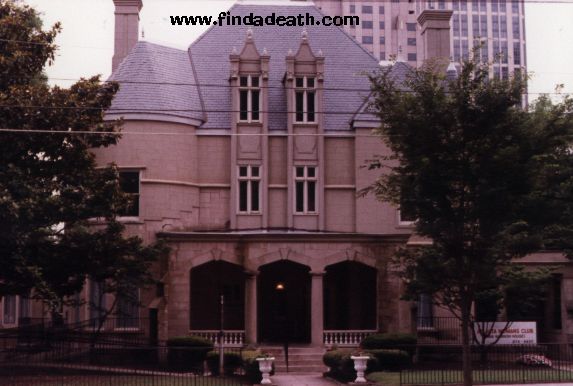 The cinema, which has been torn down now, stood here. 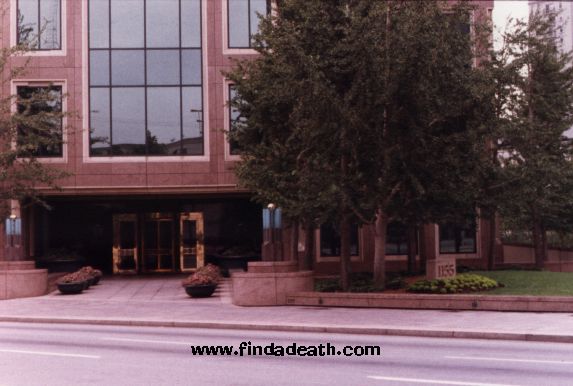 By the way, the film they were going to see was “The Canterbury Tales.” No snide remarks here, coz I ain’t seen it. They were crossing the road at 13th and Peachtree, when a taxi driven by Hugh Gravitt rounded the blind curve. 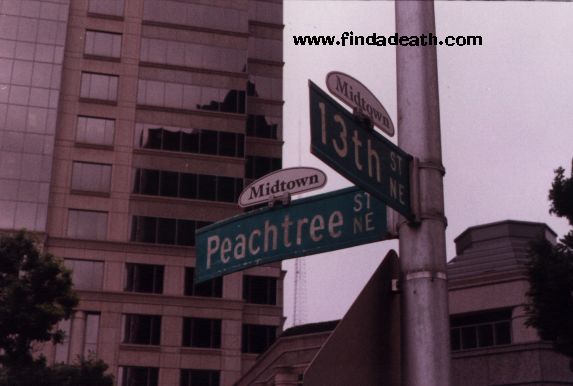 She freaked, panicked, and darted into the path of the car. Like a deer in headlights. Well, you know what happened next? Blammo. Right here. 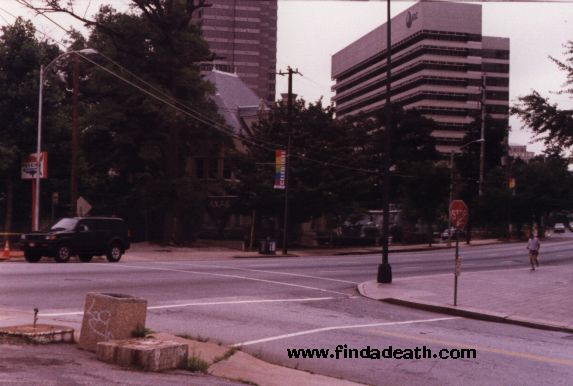 It was reported that the driver was going anywhere from 35 to 50 miles per hour, in a 25 mph zone. The skid marks were 67 feet long. Yow.

March 2002 Findadeath.com friend Cayley send us this: Margaret Mitchell died (now that I live in Atlanta, I have to find these things out) at Grady Memorial Hospital in downtown Atlanta which was the same hospital that “Supermodel” Nikki Taylor was in for all that time after her big car crash last year.

Margaret Mitchell died on the 16th of August, from brain damage. I don’t know what hospital she was in. Her body was taken to Spring Hill Funeral Home.

On August 17th, her funeral was held. 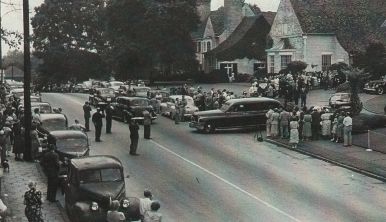 Only 300 invited guests were allowed to attend. After the service, fans converged, and tore apart the floral arrangements for souvenirs. I know I would have. Maggie was taken to Oakland Cemetery, for burial.

Now here’s the weird bit. In her will, Maggie wanted the original draft of “Gone blah blah blah” burned. Yes, burned. The day after she died, her secretary and the building custodian burned it in the boiler of One South Prado. Hello! Here is the plaque to commemorate this event. 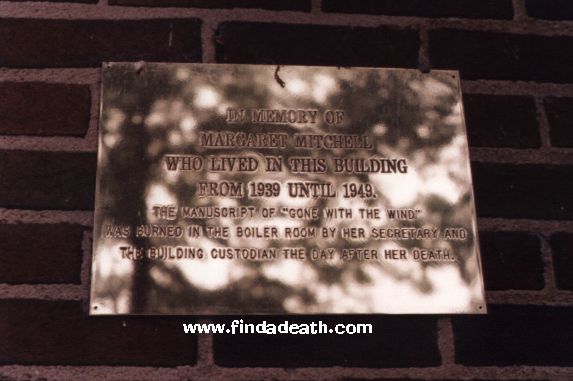 The tour guide at the dump told us that there are a few pages of it left in a safe deposit box, and if anyone were to dispute Mitchell’s authorship, it would be opened, proven, and then destroyed. Does this make sense to anyone else? I really think that something dodgy was up with Miss Maggie.

UPDATE: Hi – I read your story on Margaret Mitchell and here are a couple of facts that would actually spice up your prose.

The character of Rhett Butler in Gone with the Wind was based upon her first husband, Red. He was a drunkard and a wife beater and they divorced. In this particular time in polite society, being abused and divorced was considered shameful. Thus, she kept her first husband, with his drinking and beating ways, a secret.

So, the reason she had the manuscript destroyed was so this guy could never see the original manuscript with references to him and demand money or let her secret out. Of course, it didn’t really matter anyway, because he jumped out of a hotel window shortly after she died. He was drunk…

Hope that helps! Thanks for the interesting stories!  Laurie Tanner

ANOTHER UPDATE FEB 2001: Her husband had some kind of an affliction where he hiccuped CONSTANTLY. It got so bad that at times they feared for his health (I guess it weakened his heart). Can you imagine how annoying that must have been? He had a host of other health problems as well.

The night she was killed, when they were crossing that street, she LEFT HIM ALONE in the middle of said street and was running back to the curb when the car hit her. I think she was just trying to get rid of some dead weight and it backfired and she ended up French kissing the grill of that taxi.

Once again, I enjoy the hell out of your site and I’m almost looking forward to celebrities kicking off to see what you write about them.

Thank YOU, Kevin!  I love this shit.

I wrote to you several months ago about submitting a photo of Margaret Mitchell and I finally have found it!  Sorry I took so long, but I was in the process of moving.  This photograph was taken right after she was hit by a car, from which she sustained injuries and later died.

On a sane note, the taxi driver was convicted of involuntary manslaughter, and sentenced to 10 months and 20 days in prison. He died in 1994, at 74.

Think I should avoid cocktails before writing these things?

One thought on “Margaret Mitchell (author of Gone With The Wind)”