Thank you to James Hunter for this summary.

-Marilyn took the pills at around 8:00 P.M. Peter Lawford called her at approximately 8:25 P.M., at which point she was mumbling and incoherent and slipped into a barbiturate coma while she was on the phone. Lawford tried to rouse Marilyn by calling her name sharply a couple of times, at which point he hung up the phone and called Marilyn’s attorney Mickey Rudin and explained what had happened.

-Rudin then called the other line at Marilyn’s house, which was answered by Mrs. Murray. He asked very simply “is Marilyn alright?” without explaining ~why~ he was concerned. Mrs. Murray did a cursory check at Marilyn’s door…the phone cord for the other phone was under the door and she could hear Frank Sinatra records playing, so she assumed that everything was alright. She returned to the phone and told Rudin that all was well, and then went back to bed.

-Rudin called Lawford and told him what Mrs. Murray said, but Lawford remained concerned. He called Marilyn’s private line a few times, but all he got was a busy signal. Between calls to MM, he also called Bill Asher {who was then a partner in Lawford’s production company}. Bill was getting ready to go to MM’s with Peter at 1:30 A.M., but Lawford finally decided against the idea and the matter was dropped. Everyone went to bed.

{Lawford suffered tremendous guilt about not going to Marilyn’s house for the rest of his life, and a year after Marilyn died he experienced a similar situation while on the phone with Judy Garland. After racing over to Judy’s house and bursting through the door in a panic, he discovered that Judy had simply drifted to sleep, which her personal assistant explained to Peter happened quite often after Judy took her nightly Seconal.}

{The oft-quoted “Say goodbye to the President and say goodbye to yourself because your a nice guy” line that MM reportedly uttered to Peter was never mentioned anywhere until Peter Lawford was interviewed in a 1972 LAPD review of Marilyn’s death – at which point Lawford himself was a chronic alcoholic and cocaine abuser. It seems these “last words” were a Lawford fabrication.}

-Mrs. Murray woke up at 3:00 A.M. and discovered the phone cord still running under Marilyn’s door. The light in her room was also still on, which she could see under the door and through the keyhole {photos taken in Marilyn’s house for a 1963 documentary clearly proved this, despite Robert F. Slatzer’s bogus claims that the rug was too thick for light to shine through}. Mrs. Murray called Dr. Greenson {which was verified by his daughter, Joan, who remembers being woken up by the call}. Greenson told Mrs. Murray to go outside and see if she could look into MM’s room, which she did {the window facing the front of the house was open and Mrs. Murray parted the curtains with a fireplace poker}. Marilyn was lying on her stomach partially covered by bed sheets. Her legs were
splayed apart {~not~ in the “soldier’s position”, as Sgt. Jack Clemmons, a cohort of Slatzer’s, later claimed}, and her arm was out-stretched with the phone receiver resting near her hand. This was proven by photos taken of MM’s body in her bedroom by the police, which were finally found in 1995. Mrs. Murray then reported what she saw to Dr. Greenson, who immediately drove over from his house ten minutes away.

-Dr. Greenson arrived around 3:30 A.M., at which point he took the fireplace poker and broke the glass in one of the bedroom windows {not the window Mrs. Murray had looked through, which was covered on the outside by a
wrought iron grill, but the larger bedroom window on the side of Marilyn’s bedroom, which was not covered by a wrought iron grill}. After breaking the glass, Greenson reached in, unlocked and opened the window, and then climbed over the low sill to enter the room. 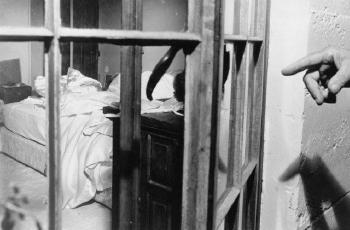 Before he took her pulse, he could already tell that Marilyn was dead. {This was all verified by Dr. Greenson’s personal correspondence to MM’s New York psychiatrist, Dr. Marianne Kris, and MM’s close friend, the poet and screenwriter Norman Rosten. Both letters were written by Greenson on August 17th, 1962.}

-After slipping into the barbiturate coma while on the phone with Lawford at 8:30, Marilyn lived for approximately two more hours, placing her time of death at approximately 10:00 or 10:30 Saturday night. This is supported by the advanced rigor mortis her body was in when the coroner moved her body at 5:30 the following morning, and also the fixed lividity on the front of her body {which was consistent with the position she’d been lying in for nine hours}. MM’s body also had faint secondary lividity on the back of her body, which has led to erroneous speculation that her body was moved while it was in her house {the implication being “foul play”}. In fact, faint secondary lividity often occurs on corpses after they’re placed on gurneys and removed from the place of death. Marilyn’s body was turned from lying on her front on her bed to lying on her back on a gurney at 5:30 A.M., a position in which her body remained for almost five hours until her autopsy was performed at 10:00 A.M. This was indeed sufficient time for lividity to form. {Interesting add-on: Nicole Brown Simpson, who’s body “bled out” at the scene of her murder and who had so little blood remaining that the coroner had to obtain a blood sample from her heart, also developed faint secondary lividity from lying on the coroner’s gurney after her body was removed from the crime scene.}