One of the most amazing actresses of the 20th Century, turned into one of the most curious recluses. Since 1978, she occupied a two room apartment overlooking a courtyard garden, at 12 Avenue Montaigne in Paris. 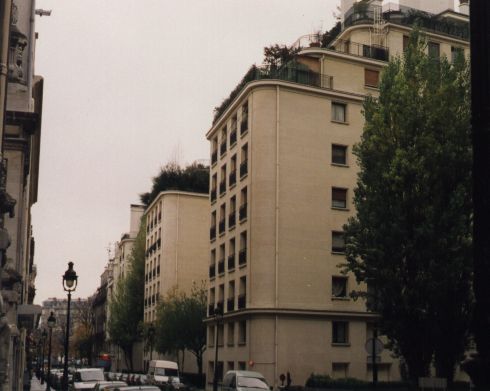 Being bedridden for her final five years, she would spend hours chatting with her friends across the world on two telephones (spending up to $7,500 a month). Only on extremely rare occasions would she be seen leaving the front door. 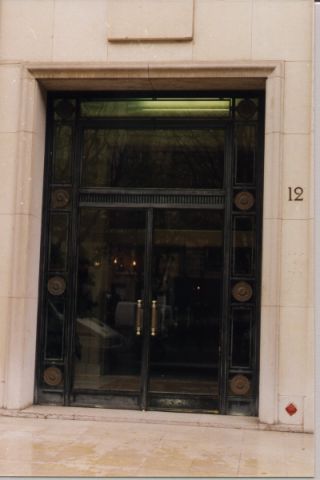 This from findadeath.com friend Mike Pare: She was not bedridden in the classic sense, she just chose not to get up and around. She had had a bad fall, and did have arthritis, but she was in otherwise excellent health, she just preferred to be a martyr. She was not hard up for money, she maintained her NYC apartment til she died tho she had not seen it in years, she was on occasion cash poor. One emerald piece she left her daughter was sold for over $900,000.

She had an aversion to being seen as she aged, tho one resourceful photographer did capture pix of her thru a window and on her balcony shortly before she died that were printed in European papers.  Wish I had it.

This just in from findadeath.com friend Jo: Here’s a copy of the last official photo of Marlene Dietrich, taken a few months before her death in her Paris apartment. 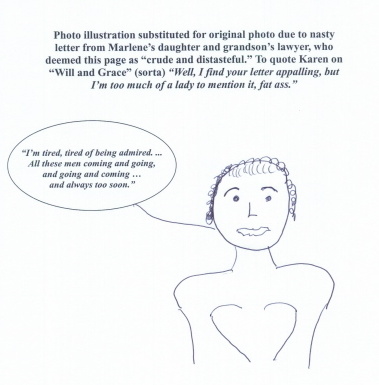 Image removed Feb 14, 2008 after threatening emails and phone calls from the Dietrich spawn.  First the lawyer gives me a month and calls me crude and distasteful, then changes the deadline to the next day.  Today the grandson calls and threatens me and my tour company with a two hour deadline, before he contacts lawyers?. Obviously he’s got an axe to grind (or a buyer for the photo).  It was sent to me in good faith by a death hag,  I didn’t know it was owned by family.  Whatever.

More than 1,500 people mourned at her funeral at the Madeleine Church in Paris. Her closed coffin, draped in the French flag and adorned with a simple bouquet of white wildflowers, rested beneath the altar. Three medals, including France’s Legion of Honor, were displayed at the foot of the coffin, military style, for a ceremony symbolizing the sense of duty Dietrich embodied in her career as an actress, and in her personal fight against Nazism. Her daughter placed a wooden crucifix, a St. Christopher’s medal and a locket enclosing photos of Dietrich’s grandsons in the coffin. On May 16th, Marlene was flown to Berlin, her birthplace, for burial near her mother Josefine von Losch. 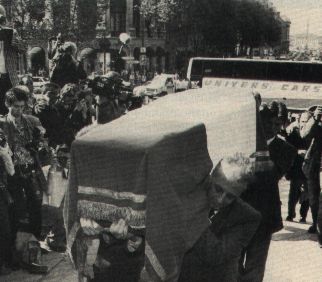 Dietrich is buried in the Friedenau Cemetery, in Berlin.

Findadeath.com friend Harald sends this:  As I have heard and read from many different sources, Dietrich (who had a hate-love relationship with Germany) wanted to have her last resting place in Berlin, because she wanted to be buried close to her mother, who is buried in a little Berlin cemetery, (Friedhof III, Berlin-Friedenau). It could be that Marlene finally made peace with Germany (she even came to Germany for a tour in the early 1960s). But maybe bringing her to Berlin could as well been a late revenge of her daughter, Maria Riva, who always said that Marlene was a dominant tyrant. And now Maria had the last word 😉

Trivia: Dietrich once proclaimed that the diaphragm to be “the greatest invention since Pan-Cake makeup.

Findadeath.com friend Andrew MW sends this in, December 15, 2001:  In 1981, I had lunch with an actor who had just worked with David Hemmings, who had directed Frau Dietrich in “Just A Gigolo” a few years before.

Apparently Marlene could not walk, and when she did the title song, was put on a platform and wheeled across to the piano!!….. it is a very difficult film to find, but I do recall that moment. A true story I believe. The actors name was John Hargreaves (directory).

So there you have it

July 2003 My pal Harry Martin sends us this:  We were on a cruise to the Mexican Riviera on the Princess Cruise Line ship the Sea Princess in February 2002. One of the features of the ship was a display of articles from the Marlene Dietrich estate that Princess purchased. I recall they had one gray dress (teeny waistline), some telegrams, a cigarette case and a makeup travel case. It was too cool. But sorry to say, though, most folks never stopped to see it because they were on the way to the theater or because on many days, you had to move the stupid art auction prints out of the way. But you know me, I just moved the dumb pictures so I could see the whole exhibit. So if any Find a Death fans are ever on the Sea Princess, be sure and look up the exhibit.

Trivia: Her make-up man said she kissed so hard that she needed a new coat of lipstick after every kiss.  Cool.