He was born Nicholas Adamchock, in Nanticoke, PA. He was in “Rebel Without a Cause,” and numerous other films, but he’s probably best known for his role in the television show, “The Rebel” 1959 – 1961. He had a troubled life, which included separating from his wife (but retaining custody of his 2 children), and a seriously stalled career by the time 1968 came around.

On the night of Feb 7, 1968, Nick was supposed to have dinner with Erwin Roeder, his lawyer and friend. Nick never showed up. Adams was known for his punctuality, so Roeder decided to check the actor’s home himself. He drove to El Roble Lane, 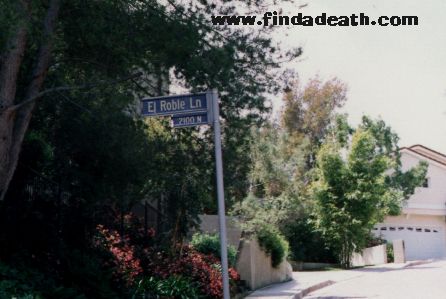 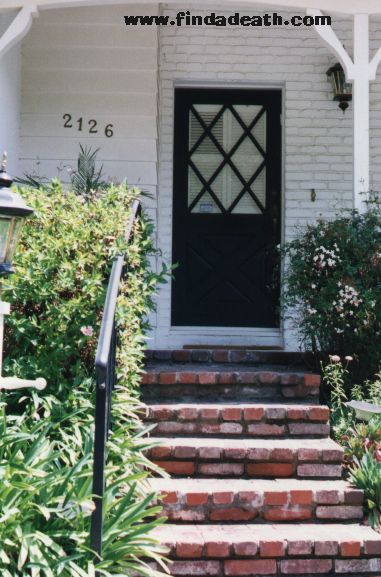 When he arrived at Nick’s house, he found  Nick’s car in the garage, but no sign of life in the house. Roeder broke a window and discovered Nick dead in his bedroom (one of these rooms, probably), 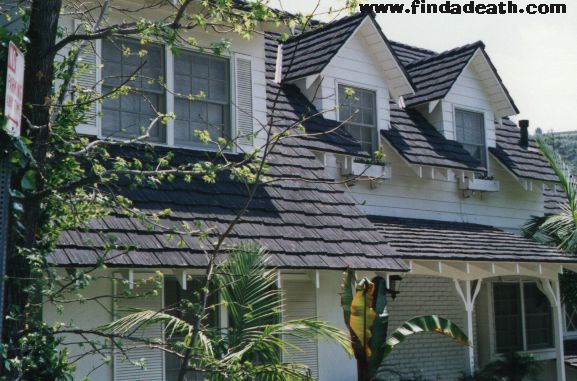 propped against a wall, his eyes open in a blank stare. He was wearing blue jeans, a shirt, and boots. A working telephone was less than two feet away.

Findadeath.com friend Lisa Burks sends us this picture of Nick being removed from his house.  Thank you, Lisa. 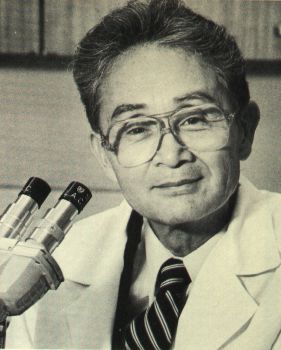 performed the autopsy and found paraldehyde “in the organs, mixed with sedatives and other drugs – enough to cause instant unconsciousness.” This is a drug to battle alcoholism, but Nick was not a known drinker. No prescription bottle was found, and no needle mark could be found on him. It’s still considered a mystery, and officially it was listed as “accidental suicide.”

Findadeath.com friend HBobbie sends us this: Hey Scott. Regarding the paraldehyde found in Nick Adams’ system: This is not the drug used to combat alcoholism, it’s a nervous system depressant similar to alcohol in it’s effects, and used as a sedative. A colorless flammable liquid with a disagreeable odor, paraldehyde produces sleep for up to 12 hrs. with little or no muscle, heart, or respiratory depression. It is often given to alcoholics having delirium tremens to induce sleep, and is also used to calm psychiatric patients. Paraldehyde is also used in the manufacturing of synthetic resins as a preservative, and in preparing leather. Yummy, huh? Most likely he took it for the high.

Nick Adams’ body was taken back to his birth state of Pennsylvania, and is buried in SS. Cyril and Methodius Cemetery, in the city of Berwick. Thanks, Lare. 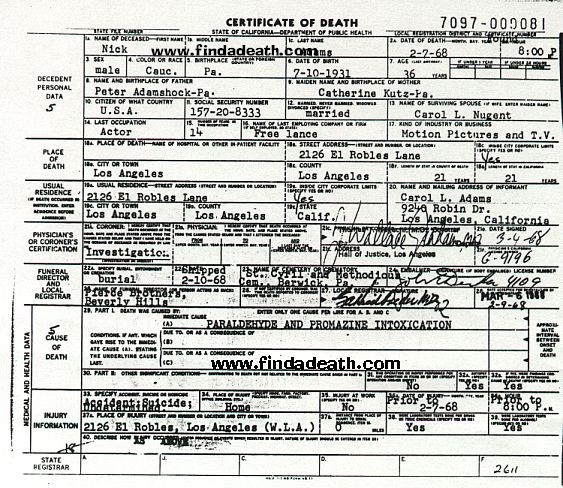 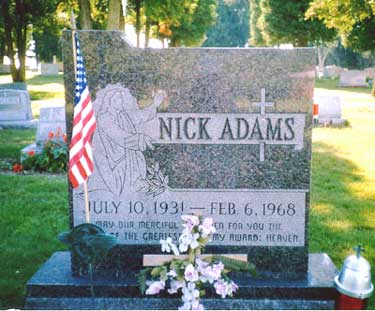 Trivia: Nick was good pals with James Dean, and once had an affair with Natalie Wood. This guy kept good company.

More: In 1963, he spent over $8000 dollars to advertise in hopes of winning an Academy Award nomination for his role in Twilight of Honor. He succeeded in receiving the nomination, but lost the Oscar to Melvyn Douglas.

Findadeath.com friend Patty sends this in: “Did you know that he dubbed the lines in Giant for James Dean?  Dean played the part in the hotel too drunk and they couldn’t use it, and since he was already dead, Nick Adams was used to dub in his lines.”  Thanks for the info Patty, and send my love to all the folks at work!

One thought on “Nick Adams”