I’m afraid this man will kill me some day.

NOBODY got what they deserved here.  Nobody.

On Sunday, June 12th, 1994, Nicole Simpson was at her and OJ’s daughter’s recital at Paul Revere Middle School in Brentwood. Allegedly OJ showed up unannounced and Nicole blew him off.  She made him stand there. He got angry. At 6:30 she dines with family (Not OJ, who was angry) at Mezzaluna restaurant. She had the rigatoni. 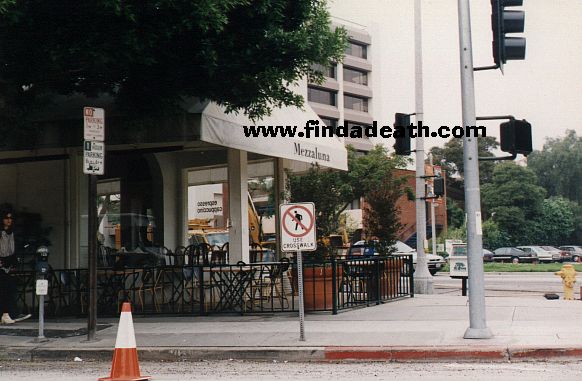 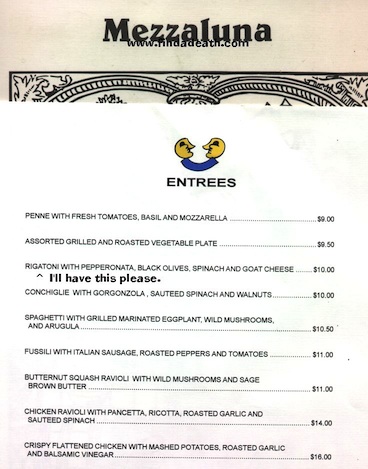 After that, she and her kids scampered across the road to Ben and Jerry’s and buy a dish of chocolate chip cookie dough ice cream. They head home.  NicHole’s mother gets home and realizes that she lost her prescription gold rimmed glasses. HRR. She phones the restaurant, they have a looksee and find them in the gutter outside (I could be really mean here.)  Mom calls NicHole, who calls the restaurant and asks Goldman to drop them by while she runs a hot bath, lights some candles, and puts on a skimpy dress. She had met Ron before, at their local gym. They became *ahem* friends, and he was seen at times driving her Ferrari and playing with her children. 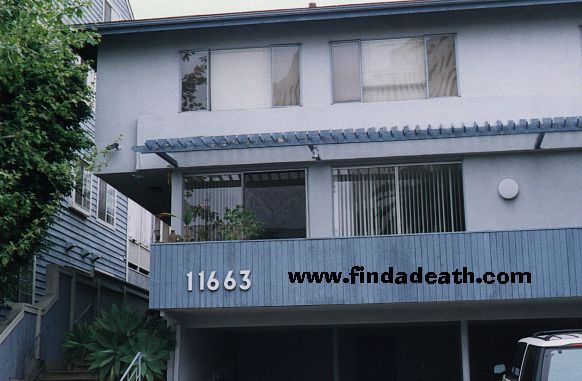 Prior to dropping off the glasses, Ron Goldman goes home to change and probably “freshen up”.  He leaves his home, glasses in hand, and begins the 5 minute walk to NicHole’s bunghole.  I heard a rumor that the waiters at Mezzaluna used to draw straws to see who would “return” whatever NicHole left behind on any given night. 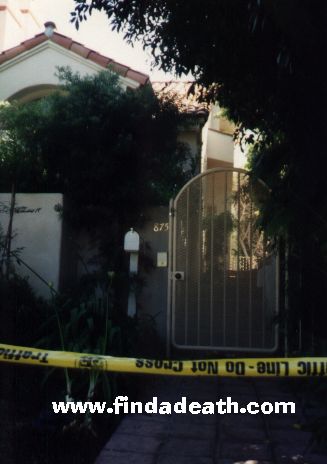 Meanwhile, OJ flies to Chicago for some goddamn reason. Makes no difference. There is a complete probability that he killed them AND made his flight in time.  He probably ditched the weapons in some airport garbage can.  It should also be mentioned that OJ’s girlfriend Paula Barbithingy dumped OJ, and boy was was angry.

Around midnight, a neighbor found NicHole’s dog Kato wandering around the neighborhood. When the neighbor returned the dog to NicHoles, he found a (WARNING dead pic) nasty little discovery waiting for him. He called the cops.

Here’s the skinny:  She weighed 129 pounds. Her hair was naturally brown, and she needed a touch up. She had a boob job, and she only had a lower tan line. Slapper. She also had post mortem bug bites.  Probably ants. A description of the neck injury goes as follows, “The incised wound of the neck is gaping and exposes the larynx and cervical vertebral column. It measures 5½ by 2½ inches in length and is found at the level of the superior border of the larynx.” That wound also cut into her spine. I’ll spare you the techie details, but this is the fatal wound. She would have lost consciousness 8 to 10 seconds later. It sounds short, but it must have been an eternity. She was also stabbed on the left side of her neck twice, and in the scalp 3 times. She had plenty of injuries on her hands as well, from trying to fend off the killer.

WARNING DEAD PIC. This is her.

Goldman’s throat was cut too.  The first wound was superficial, missing all the major veins. He fought the killer with a lot of strength and was cut in the throat again, this time severing the left internal jugular. It must have been agony.  The killer used this moment of weakness to finish the job. The fatal wound could be one of two that hit the left internal jugular vein, but that hardly describes what happened to him. He was so badly beaten, and filled with stabs and bruises. Five wounds on the face, five stabs to the neck, left flank, right chest, right hand, left thigh etc etc. Jesus. He slumped back into the shrubbery in the walkway, and died a few agonizing minutes later.

WARNING DEAD PIC. This is him.

He had his stepmother’s shopping list in his pocket and a beeper that was going off when they found him.
He also had the envelope with the glasses.  He managed to complete the errand. 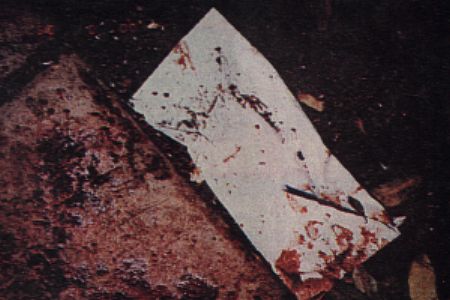 Under Nicole’s feet was a takeaway menu. We all get them.  BAD product placement. 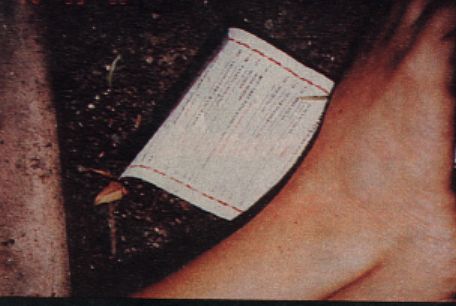 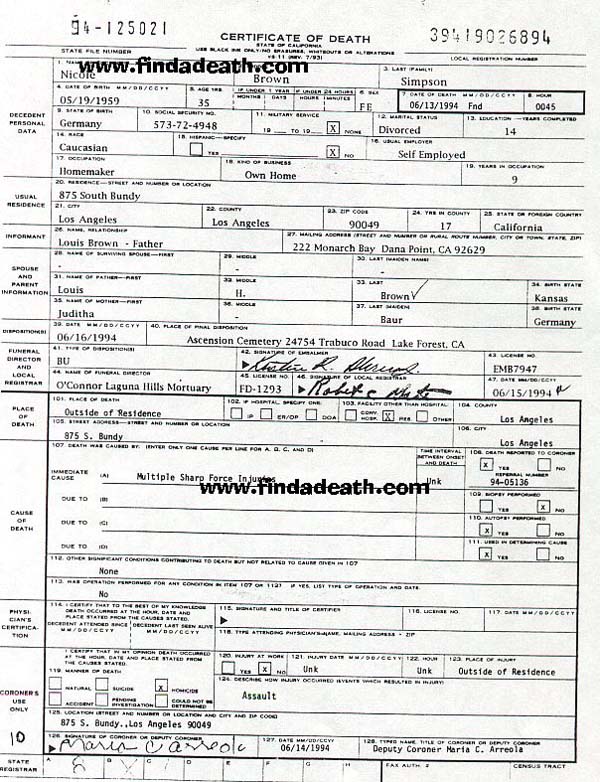 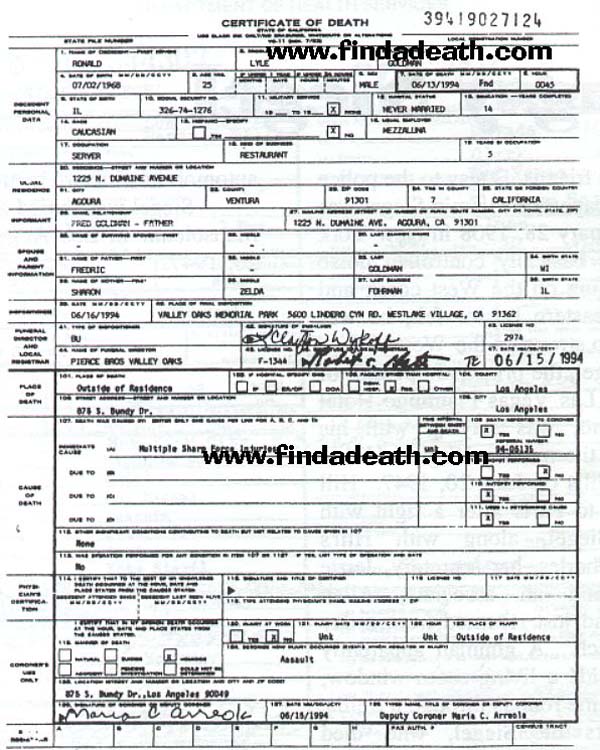 Bit of backstory:  A couple of weeks prior to the murders, OJ went to the Ross Cutlery Shop in downtown LA, and bought a knife. I went in and asked what kind of knife it was, and they told me it was a “Cold Steel Defender II Push Dagger,” like the one in the evidence photograph below.  Although the murder weapon was never recovered, the knife OJ bought was compatible with the wounds. 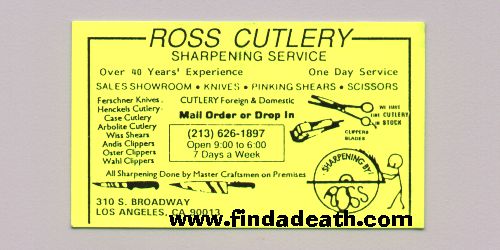 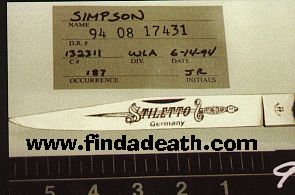 On the 16th, NicHole’s funeral was held at St. Martin of the Tours church in Brentwood (same as John Candy).  OJ and the kids attended. It probably looked like a fucking Robert Palmer video with all those bitches in little black dresses dragging their feet behind the casket. 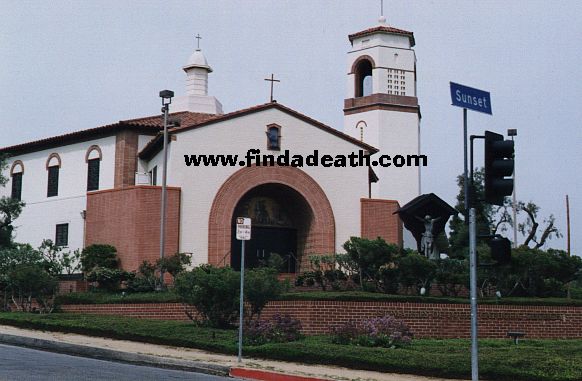 Nicole was buried in Ascension Cemetery, in Lake Forest. For publicity purposes both OJ and NicHole’s sister Denise Brown were paid (at different times) to pose for pictures at her grave. These people have no shame.  Yeah, I know.  But at least I’m honest with my emotions.

On the 17th, a warrant was issued for OJ’s arrest. The “low speed Bronco car chase” occured and circus began complete with all those twats holding up signs saying “Save the Juice!” or “We love OJ!” Go to hell.

In the meantime, OJ’s home on Rockingham and the bungalow on Bundy became tourist attractions. 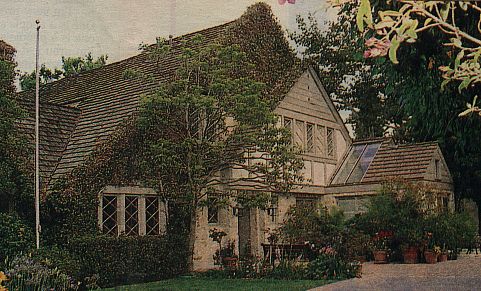 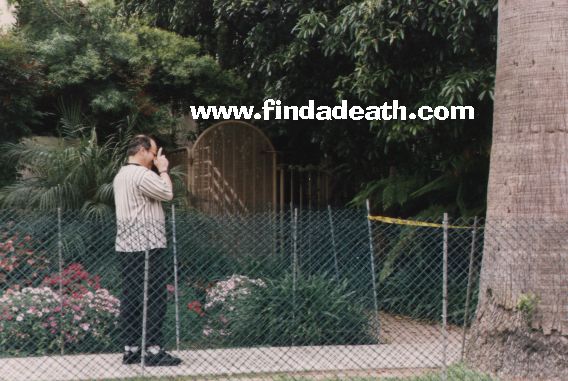 People were constantly around them, putting up note’s and signs, and posing for photographs. 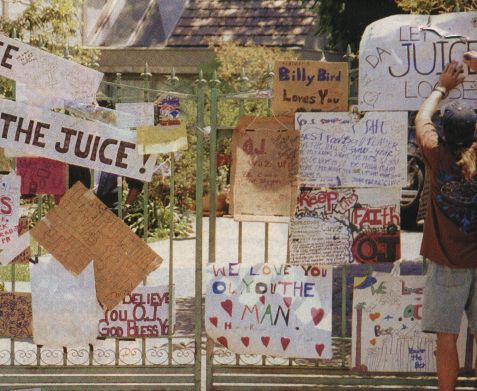 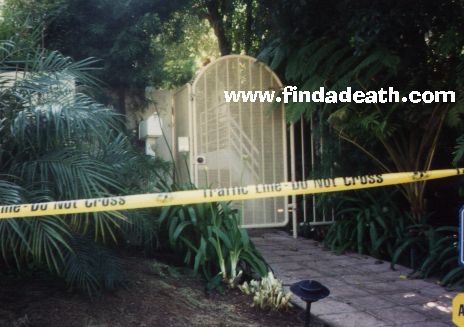 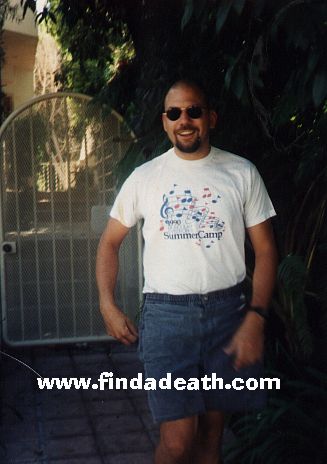 I even saved souvenirs from the scene.  If only these things could talk. 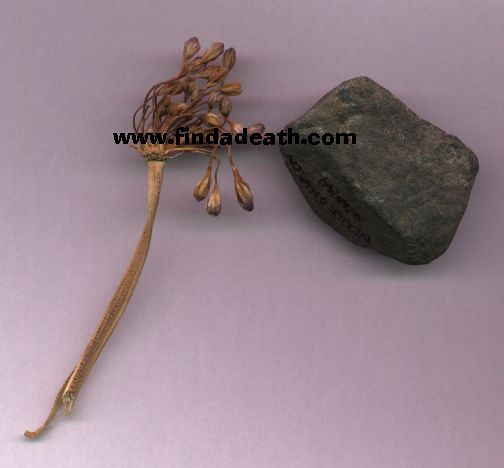 Eventually both places made attempts to camouflage.

The Condo’s address was changed from 876 to 879.  A wall has been installed in the front to prohibit any view of the homo. 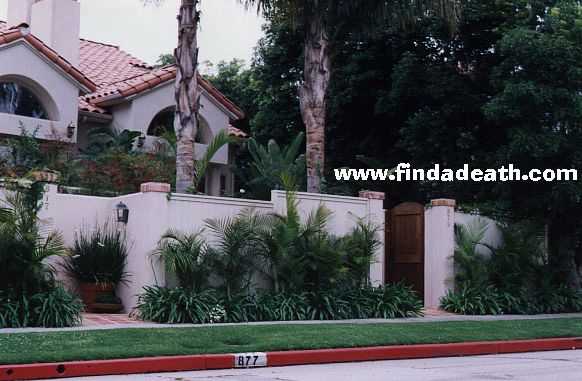 Here’s a weird story.  While the trial was going on, my sister was visiting me in LA.  I of course took her to see the murder scene.  Guess who else was lookeylooing?  Jerry Springer happily posed with us. 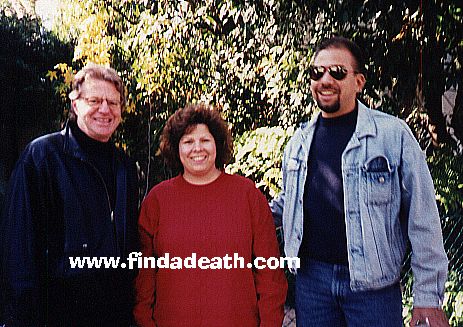 The trial.  AGONY.  Yet, we watched.  Every single detail poured over, time and time again and every whore, junkie, fleeing housekeeper or cop in blackface was marched out.

On October 3, 1995, the verdict was announced.  LA was freaked and ready for WW3.  OJ was found not guilty. I will never forget where I was (as much as I try). It was weird. I almost cried. LA was like a ghost town. Everyone was scared to death of another riot. For that reason alone, I was relieved. Champagne was flowing at OJ’s. The rest of the world was stunned.

Mezzaluna closed in July of 1997. They claim it was partly because of the Simpson frenzy, but I think they are just trying for moral high ground to save face. That restaurant should have closed earlier on, and Nicole Simpson breathed new life into that dump. After they shut it, they decided to auction off everything, including the menus.  They could have just taken one when it was open.  Idiots.

“Even if I did do this, it would have to have been because I loved her very much, right?”

“Listen, I would love to get my hands on whoever did this. Love to.”

On Wednesday, July 30th 1998, the Rockingham house of OJ was knocked down. NicHole’s sister Denise Brown was there with the rest of the gawkers. “I don’t think I’ve ever been this happy in a long time. Simpson is slowly but surely being demolished.” Never mind the fact that he didn’t live there anymore.  I hate her. Go and date Geraldo Rivera again. Or create a full time job for yourself by starting a charity with your murdered sister’s name. Or sell the childrens’ birthday party photographs to a tabloid … Oh wait, that was the other Brown sister.

The families won the civil lawsuit, awarding the Goldman and Brown families 33.5 million dollars in damages. Big respect goes to Ron Goldman’s father Fred.  He offered to reject all of OJ’s money, in exchange for a murder confession. OJ refused. Strangely (or not) mostly everything OJ owned was put in a trust for his children, the same day the court signed the damage judgment against Simpson. The rest of the stuff was auctioned off, and some guy from Denver bought $16,000 worth of OJ shit, and burned it, in front of the LA courthouse. They had a permit. I just think that’s a bit ridiculous. He could have given that money to some needy organization. Or me.

In April of 1998, OJ did an interview with a talk show host here in Britain named Ruby Wax.  As a joke, OJ shows up at her hotel room, and mimics the PSYCHO music and pretends to attack her with a knife.  Hilarity ensues. 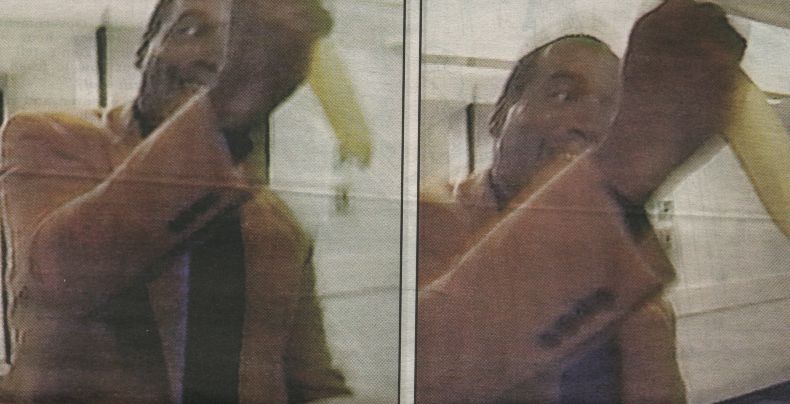 The Brown family sold Nicole’s diary to the National Enquirer for a hundred grand. They made an additional $162,000.00 for magazines and television programs, including the sale of Nicole’s wedding video. Nicole’s dad also worked for OJ.  Nicole lent her parents $50,000.00. After the civil suit, the Browns were in a dispute with the Goldman family about the money. Seriously, people are so gross.

You reap what you sow.

Some of the evidence was on display a couple of years ago.  This is the real deal. 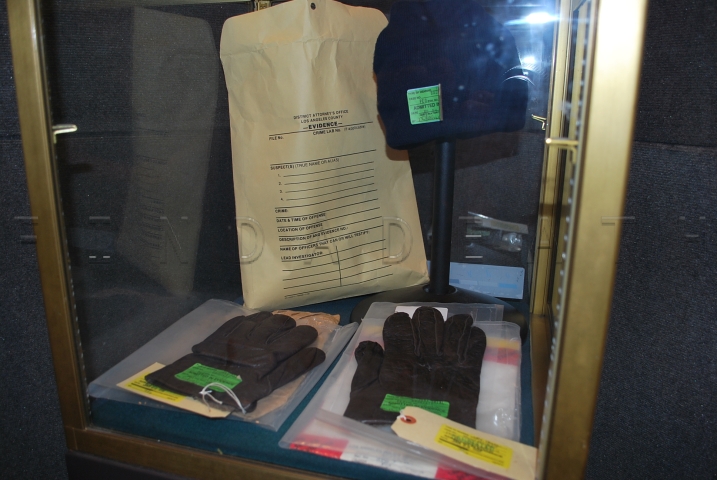 Open note to the defense: Everyone knows that an old, dried up, bloody glove will shrink. If it didn’t really fit,  you can suck my dick.  Hell, do it anyway.

Did anyone else think that the dancing Judge Ito’s from Jay Leno’s show were ridiculous and unfunny?  I hated being alive that year.

Trivia: At one point the jurors ate at a branch of California Pizza Kitchen, and were given T-shirts by the establishment. The next day in court, 12 of the 17 wore them. The back of the shirts said, “14 ethnically diverse cultures peacefully coexisting on a thin, delicious crust.”

More: Simpson played golf with Bill Clinton 3 weeks prior to the murders.

And a big Brentwood Hello to y’all.