The world was my oyster, but I used the wrong fork.

Before you get worried, I am and will remain as common as dirt. I know little about this man, except what I have been told. I haven’t even seen the movie. Very kind Findadeath.com friend Dominic Druce took the time to put together this account of the death of Oscar Wilde for us. Thank you Dominic.

Wilde was released from prison 19 May 1897, and wandered between a small band of friends in England, France and Italy for the next few years. Since the death of his wife in 1898 he had been denied access to his two sons and given 150 a year from her estate to live on. Given his extravagant tastes, this did not go far.

August 1899 he moved from the Hotel Marsollier to the Hotel d’Alsace on the Rue des Beaux-Arts (today this is just called L’Hotel), the owner Jean Dupoirier, having paid off Wilde’s debts at the former hotel. 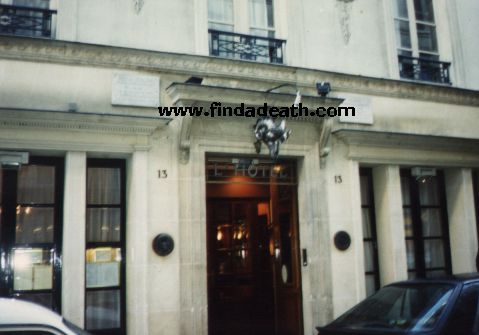 He spent the days wandering the streets of Paris, drinking with old friends and supporters who would bump into to him and, shocked by his appearance, feed him, or being blanked by former friends.

April 2, 1900, he went to Palermo and Rome with a friend who paid for him before returning to Paris. A typical day began with breakfast brought up to him at 11, 2pm – a cutlet and two hard boiled eggs, 5pm – he went to the Café de la Regence, then dined at the Café de Paris until 2 or 3 in the morning. The hotel also provided him with a ration of five bottles a week of Couvoisier. Oscar kept fat n sassy.

His former lover, Lord Alfred Douglas (Bosie), inherited 20,000 on the death of his father, the Marquess of Queensbury, the cause of Wilde’s downfall. (Very long but interesting story. That much I know.) During a meal at the Café de la Paix, Wilde asked Bosie if he could have an income from his money. Bosie had one of his idiosyncratic tantrums and announced, “I can’t afford to spend anything except on myself,” and accused Wilde of “wheedling like an old whore.” Wilde replied, “If you do not recognise my claim, there is nothing more to be said.

Oscar suffered an illness from late 1899 which he called, “Mussel poisoning,” which gave him red splotches on his arms, chest and back, when scratched. By September of 1900, he was bedridden. Doctor Maurice a’Court Tucker, from the Embassy, visited him often, but could only state that it was not syphilis, because syphilis did not itch. He also advised an operation on Wilde’s ear that had been painful since prison. It had been carried out in his room on October 10. Over the next weeks, he recuperated, enjoying visits from friends during which he made many of the famous last witticisms that are often reported as his last words, notably, “My wallpaper and I are fighting a duel to the death. One or other of us has got to go,” “I am dying beyond my means,” and, “I can’t even afford to die.”

October 29th, he got out of bed and had dinner in his room before going to a café with Robert Ross, one-time lover and devoted supporter. They drank absinthe. Warned that it was poison to him, he replied, “And what have I to live for?”

This in from Findadeath.com friend Scott Williams (as always, Thank You.) –

“Just yesterday in the news, a U.S. university unlocked the chemical secret of “Absinthe” which Oscar was imbibing prior to his decline and demise. Made from the root extract of “wormwood”, it has a property that aggravates and disrupts the chemical coordination of brain cell communication in a big way, like, total chaos. It was said to be all the rage among artists and such in Paris at the time even though the French Govt. had outlawed it in 1815. The euphoria was intense, but too often resulted in seizures and, delirium, as
noted in Oscars’ final days. Sounds like he should have stuck to the Couvoisier.”

Findadeath.com friend Steve McSomething sends us this:  It is a translucent turquoise liquor, which at its strongest can be 160 proof.  It is banned in all but three countries (the Czech Republic being one of those where it is available).  During World War II, every Czech adult was rationed a half-liter of it per month.  I had a few shots in Prague a couple of years ago.  No seizures or delirium; it tasted like cough medicine.

The next morning he had a cold and earache. Dr. Tucker diagnosed an abscess in his ear.

Through November he felt worse. Morphine was no longer working as a painkiller, so he switched to opium, chloral and champagne.

From November 27th, he began having periods of delirium, but otherwise still discussed news and literature. November 29th he was described as, “thin, his flesh livid, his breathing heavy,” and with a fortnights beard.

In the evening, Ross brought Father Cuthbert Dunne and Wilde was asked if he wanted to see him. Wilde made a sign with his hands and Dunne gave him absolution.

At 5:30 am on November 30th, a loud death rattle began “like the turning of a crank.” Foam and blood came from his mouth. He died at 1:50 pm. He had barely breathed his last breath, when his body exploded with fluids from the ear, nose, mouth and other orifices. Kablooie.

He was cleaned up and dressed in a white night shirt, and covered in a white sheet and palm branches. Maurice Gilbert took this photograph. 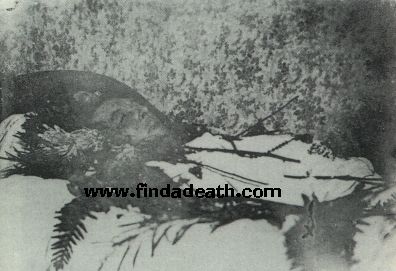 Bosie arrived on December 2nd for the funeral on the 3rd, which was described as “cheap,” at which he was chief-mourner. Father Cuthbert Dunne said requiem mass at St. Germain-des-Pres before the hearse (bearing the number 13) made its way to Bagneux Cemetery, followed by four carriages, Ross and Bosie in the first. As the fourteen mourners pushed for a better view, Bosie almost fell into the grave. Serves the bitch right.

The grave was marked, “Oscar Wilde RIP Oct 16th 1854 – Nov 30th 1900.” There was a Latin quotation from Job which translates as, “To my words they durst add nothing, and my speech dropped upon them.”

In 1909 his remains were moved to Pere Lachaise under Jacob Epsteins monument (with the broken off pee pee), paid for by a Mrs. Carew. Robert Ross’s ashes were placed in the tomb in 1918.

Trivia: the wallpaper is supposed to have been recreated at L’Hotel, and there is now a plaque to Oscar, just above the front door. 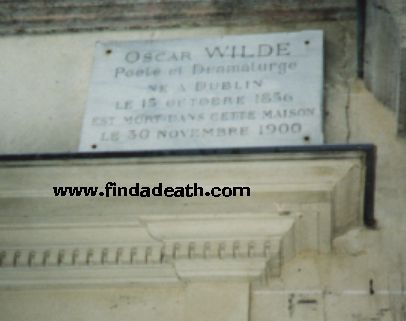