August 5th (2002) marked the 40th anniversary of Marilyn Monroe’s death.  Every year they have some sort of tribute to her, at Westwood Memorial Park, where she is buried.  This year was particularly poignant because of the anniversary.  It was interesting because I finally was able to get into the chapel.  The chapel was not even completed in 1962, when Marilyn died.  The set decorators at FOX prettied it up in time for Marilyn’s funeral. 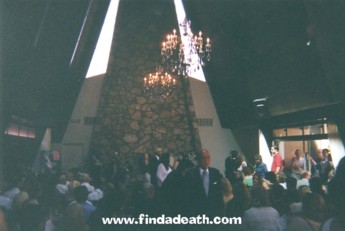 The usual suspects were there to talk about Marilyn.  Meaning really, anyone who ever farted within 5 feet of her when she was living.  One woman that was there, grew up with Marilyn (then Norma Jean) in a foster home, and her recollection was really moving.  The rest of em either had something to sell, or wanted to get on the news cameras.  There were a few impersonators there, which I found fantastically tacky.  These two on the lawn, I wish I had a zoom at this point, if their heads met, could you imagine the explosion of makeup?   I was assured that one of them, on the right, is a genuine and decent person.  The rest of em were running up to Marilyn’s grave, and getting their pictures taken for the papers.  Vile. 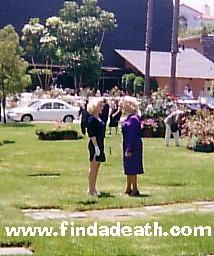 This one impersonator in particular, was BI ZARRE.  I had to go and speak with him.  Apparently Marilyn chooses to speak to this guy all the time, and has helped him through his various addictions etcetera.  He told me that, “every once in a while, Marilyn will tell me to get in my car.   Then she tells me to turn left there, turn right there, stop here.  And when I stop, there is always a Marilyn Monroe dress right there, in my size.”  Yeah, you get the picture. 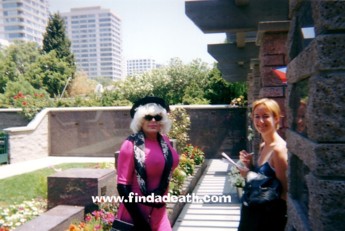 I did enjoy the day, and I had the opportunity to hook up with some friends I hadn’t seen in years.  When it was all over, I took one last walk past the woman’s grave.  The reason why we were there in the first place.  I hope she wasn’t too disgusted. 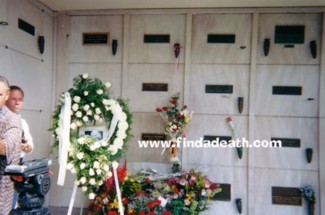