In the last thirty years there have been many speculations as to why the seemingly happy Peter Duel, co-star of the successful weekly series Alias Smith and Jones, would have taken his own life in the early morning of December 31, 1971.

Quoted just a month and a half before his death, Mr. Duel admitted he sometimes envied the character he portrayed on television. “He is hunted by every posse,” said Duel, “yet he is still able to laugh. It’s something I love him for. I try to be like that, but with so many problems besetting the world, from war to pollution and injustice, I find it difficult to keep smiling.”

The one thing that does stand out, though, is that even after thirty years, no one seems to have anything bad to say about this man who fought for the environment, campaigned for Eugene McCarthy for president in 1968 and took in stray dogs. After working in Hollywood, where rejection and criticism are the norm, this alone says a lot about the man.

Success started to come to him almost as soon as he arrived in California. He stared with Judy Carne in the 1966 sitcom, Love on the Rooftop 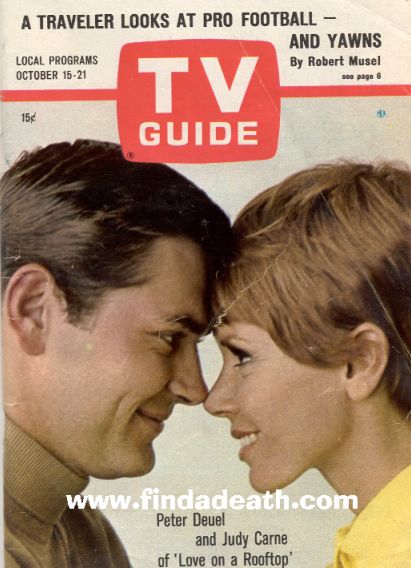 as well as played Gidget‘s brother-in-law in Sally Field’s hit series of the same name. He turned down two more series before taking the part of “Hannibal Heyes/Joshua Smith” in Alias Smith and Jones. 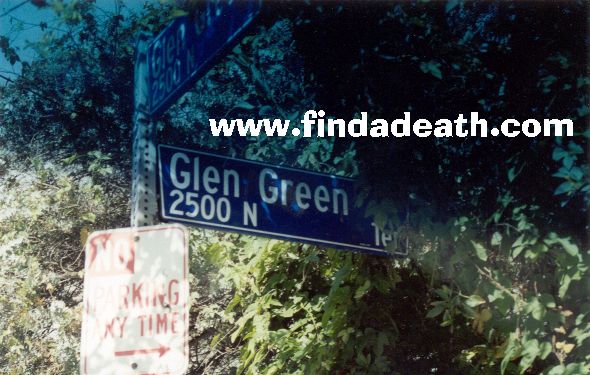 a narrow road in the hills of Hollywood. 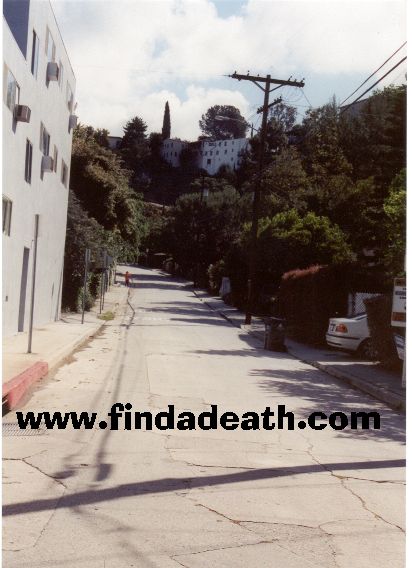 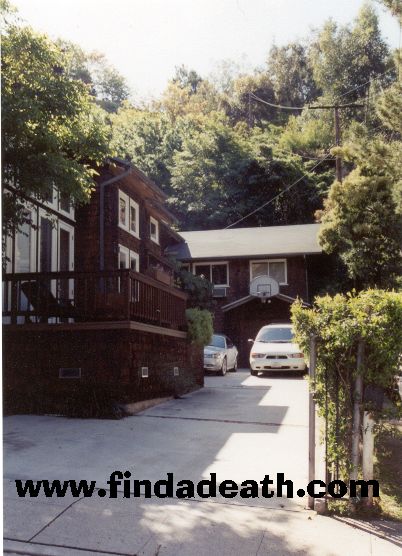 Here is another angle. 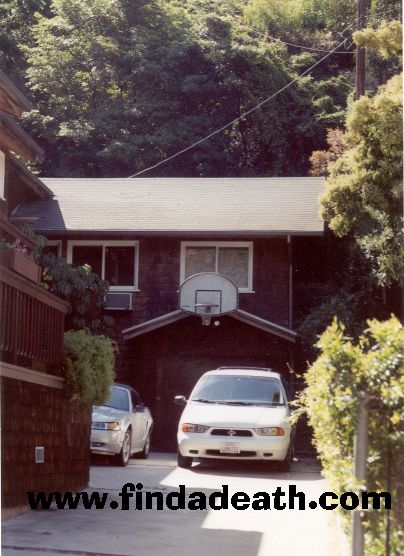 On the evening of his death, Mr. Duel had been doing the one thing he had been trying to quit … drinking. In the past several years he’d had several run-ins with the law over this problem, even having his licensed revoked. He had made a sincere effort to give it up completely by joining AA and seeking professional help.

On the Thursday night he died, he and his girlfriend, Diane Rey had watched his weekly show. Ms. Rey went off to bed in the house they shared while Mr. Duel stayed up to watch the LA Lakers battle the Seattle Supersonics in basketball. Sometime after midnight, he came into the bedroom, picked up his .38 revolver and told Ms. Rey he “would see her later.” Then he walked back into the living room. Minutes later, Rey heard a shot and found Duel dead in the living room.

The LAPD were called and took Ms. Rey downtown for questioning. From the position of the body, as well as the angle of the wound, the authorities ruled it a suicide. 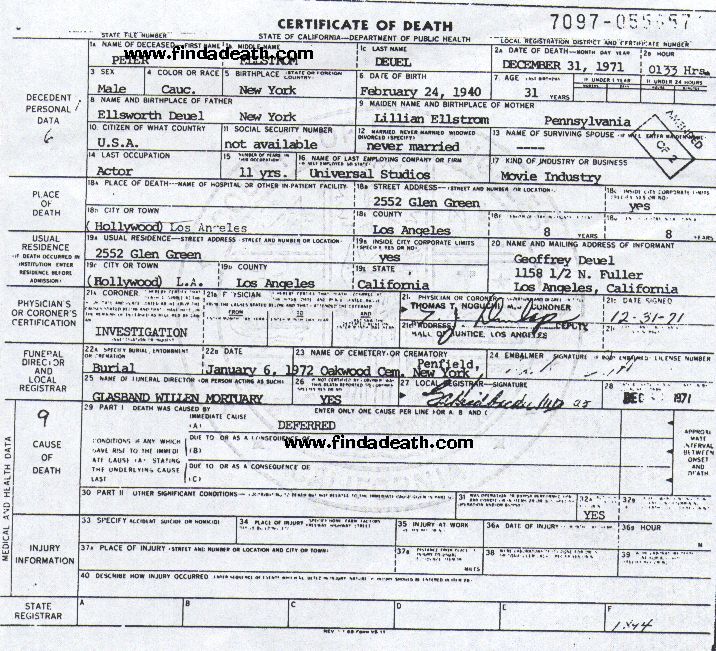 No note was found and Mr. Duel had called his answering service that very evening to schedule a wakeup call at 6:30 A.M. for an 8 o’clock studio call. Though the coroner officially ruled that he had taken his own life, it was unlikely premeditated. Mr. Duel had a .31 blood alcohol level. Said his baby-sister, Pamela Duel-Hart, in a 1999 E-Entertainment “Mystery & Scandals” show, “I know he wouldn’t have done it if he hadn’t been drinking that night.”

Universal was notified immediately and they gave the cast and crew half a day off while they contacted Duel’s replacement. Said the new “Hannibal Heyes” Roger Davies, “I was skiing in Denver when I got a phone call asking me to replace Duel. “When is he coming back?” Davis asked. “He’s not,” he was told. “He shot himself and he’s dead.”

Years later, Mr. Duel’s Smith and Jones co-star, Ben Murphy, said of the incident “I was shocked and devastated. But I wouldn’t say I was all that surprised.”

Two memorial services were held. One was held in Los Angeles, which was attended by over a thousand fans and celebrities. It was held at the Self-Realization Fellowship Temple. The second, a few days later, was held in Mr. Duel’s beloved hometown of Penfield, New York, where his sister sang and one of Mr. Duel’s early poems, Life, was read. Over two thousand people attended this one as well.

Mr. Duel was buried under his family name, Deuel, in Oakwood Cemetery in Penfield. He had shortened his name in Hollywood in the late sixties for simplicity reasons. 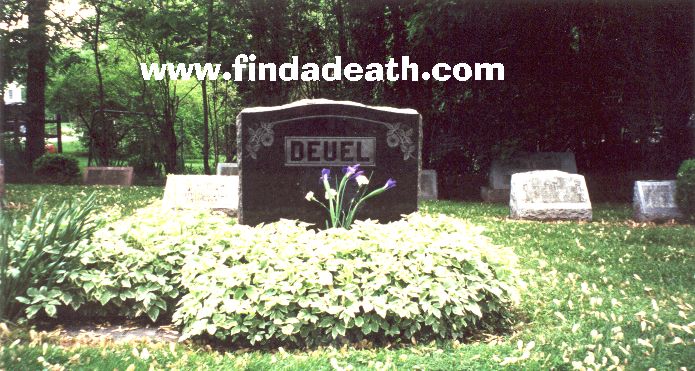 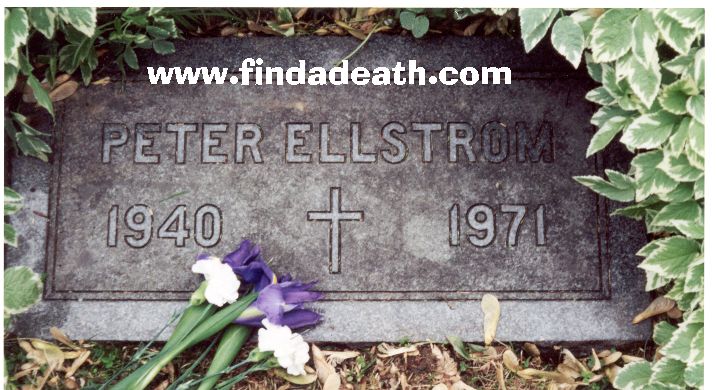 July 2003 Trivia from Findadeath.com friend Joe Walker:  Pete had a very high self-image and ate up all the huge attention that the teen magazines of the day gave him.  He desperately want to move on to more juicy roles, and to promote himself, he had filed to run for a seat on the Board of Directors for the Screen Actors Guild.  He got a telegram from them telling them he lost.  He pinned the message to the wall, pulled out his .38 revolver, and shot it.  A week later, he killed himself with the same gun.

When I see those pine trees oh so high

Stretching up to reach the sky,

I no longer wonder at the mystery–

God’s creation of you and me.

Life, and death so often feared

Is by nature so beautifully cleared;

When one observes the leaves in fall

There is no solemn deathly pall

But a brightness and color that means but one thing

That life is restored, the following spring.

Death is not the end of all

Yet just the close of a glorious fall

By that eternal spring which for us God has wrought.

One thought on “Peter Duel”