Gentlemen, you can’t fight in here…This is the War Room!

Peter Sellers was born Richard Henry Sellers, in the English town of Southsea on the 8th September, 1925. Born to a rich acting family, Peter was a spoilt child as his parents first child died at birth. Regarded by many to be the best comic actor of any age, he started out as a review artist in London. He later worked with former forces pals Spike Milligan, Harry Secombe and Michael Bentine in the influential The Goon Show. He moved in to films starring in greats such as The Ladykillers and Dr Strangelove. It was of course the Pink Panther films which propelled him to world stardom as the bumbling “Inspector Clouseau”, arguably his most well-known role.

His heart was his major worry. In 1964 he suffered a near fatal heart attack, in which his heart completely stopped. He was rushed to the Cedars Hospital where he was revived. (That’s one that got away) Over the next few hours his heart stopped an amazing seven more times. After this attack, Sellers claimed to have had a near death experience in which he saw Heaven. For the rest of his life he firmly believed in the power of the clairvoyant. He often enlisted the help and guidance of the popular British clairvoyant Maurice Woodruff, before making any major decisions in his personal life or career.

Towards the late 1970’s, his health was in rapid decline. In July 1980, he decided to have a heart operation in L.A. Before flying out for the op, he went to London for a dinner with his ex-Goon Show pals, Spike Milligan and Harry Secombe. Sadly the meeting would never take place. He was staying at his favourite suite in London’s famous Dorchester Hotel 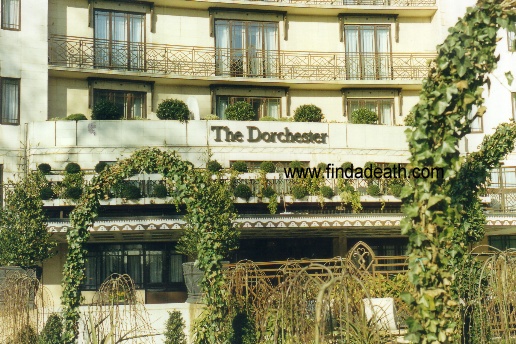 in the Oliver Messel Suite  where he suddenly collapsed with another major heart attack. He died 36 hours later in hospital on 24th July 1980 at just 54 years of age. He had been in a coma since the attack and died at 12:26 a.m. with his wife and son at his side. 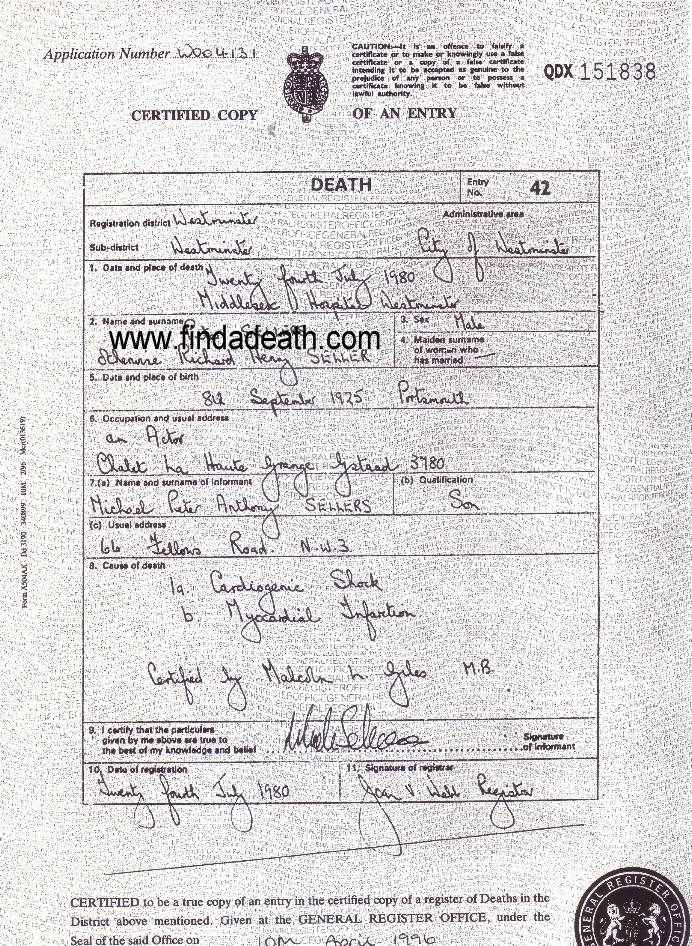 His funeral was held at London’s famous Golders Green crematorium on the 26th July. It was attended by family and entertainment friends, including Milligan and Secombe. He saved his last joke for the end of the service. Just as his coffin was to pass to its final destination, Glenn Miller’s tune “In The Mood” began to ring through the chapel. Peter Sellers had wanted a classic full band playing but all he got was a tape over the old speaker system and his Goon Show buddies started off the ensuing laughter. His ashes are buried beneath a rose bush in the cloister garden, plot E37893, with his parents. 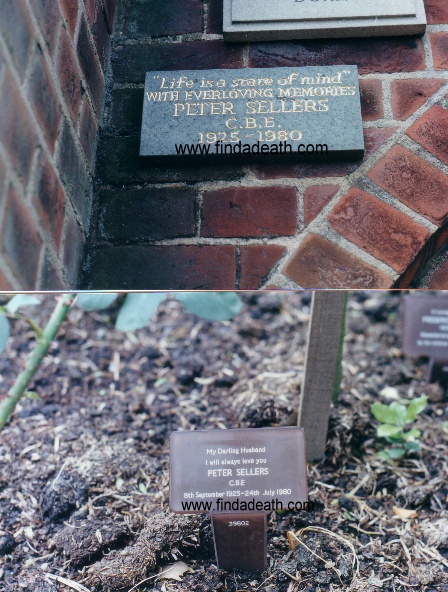 Some trivia and other bits:

He left the bulk of his £4.5 million estate to Lynne Frederick. She was known to be the girlfriend of reporter David Frost and Sellers was looking to remove her from the will just prior to his death. An alcoholic and drug addict, she died at the age of 39. Remaining royalties from Sellers’ estate were inherited by her daughter with third husband Barry Unger. Her ashes were scattered around Sellers’s rose bush at Golders Green.

In 1964 Peter was asked to immortalize himself in the forecourt of Grauman’s Chinese Theater. 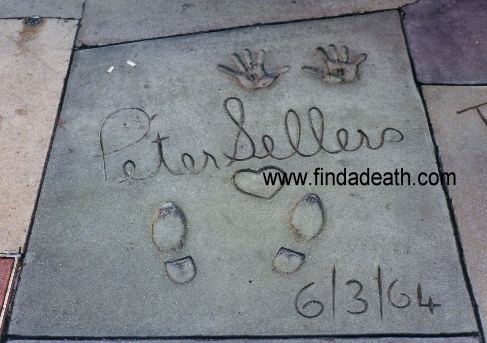 Findadeath friend Mike Smith sent this:  Stan Laurel once spoke of a fan that came to visit him in his later years, and for the entire time the fan was there, he imitated Stan.  “It was so goddamned embarrassin’ I didn’t know where to look.”

I read a long time ago that Peter Sellers was a HUGE fan of Stan Laurel and his performance in the film Being There was sort of his tribute to him. I also read that Peter visited Stan not long before he passed. Now that part about the imitation is what caught my eye because Sellers was a serial impersonator who was said to have no real identity of his own. I’m wondering if that quote is a reference to him. That would be too cool, wouldn’t it?  Great observation, thanks Mike.

This story was put together by long time Findadeath pal, Kieran Smith.  Thank you, Kieran.

One thought on “Peter Sellers”