They say it is better to be poor and happy than rich and miserable, but how about a compromise like moderately rich and just moody?

Ok, we’ve been over it a thousand times. Details of what happened are readily available, here is my own condensed version, highlighting the facts that are interesting to ME.

On Saturday, August 30th 1997, at 10:08pm, Diana and Dodi Fayed had dinner at the Paris Ritz, owned by Dodi’s father. (Di ate scrambled eggs with wild mushrooms, followed by sole, thanks for asking.) They left the back door (thank you Mark Langlois) of the Paris Ritz in a Mercedes S280 ( licence plate 688 LTV 75) driven by drunken Ritz employee Henri “Pastis and Prozac” Paul at 12:20am. 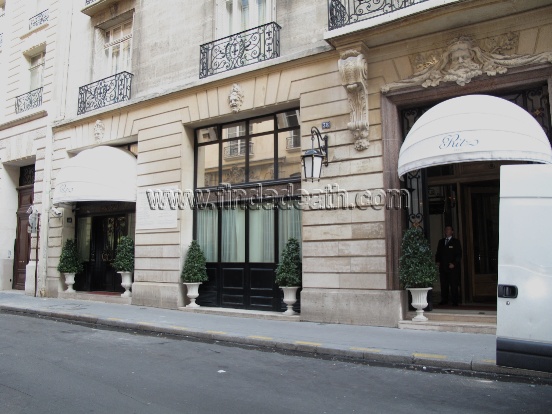 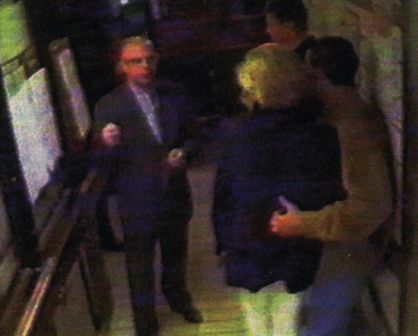 The interior of the Mercedes looked exactly like this:

The offers this unique perspective – of the Princess’ last moments.  Our good pal Jamie the Mortician has access to a Mercedes Benz – of the exact year and specifications as the dead woman’s last ride.  He generously snapped these pics, exclusively for us.  Thanks Jamie!

This is where she sat. 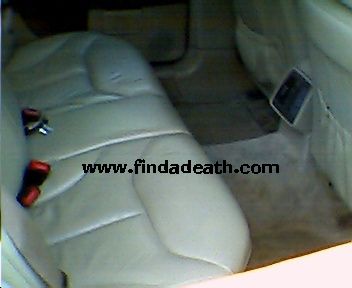 A view from the other seat. I’ll rest my tiara here. 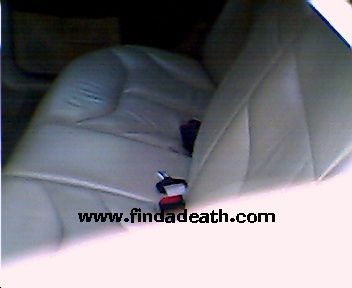 This is blocking my view of the road!  Dodi! Do something! 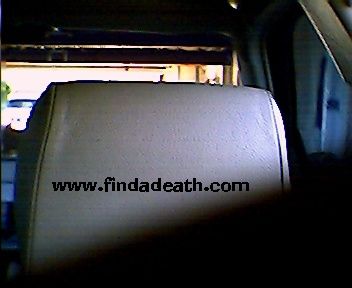 He seems to be going awfully fast. 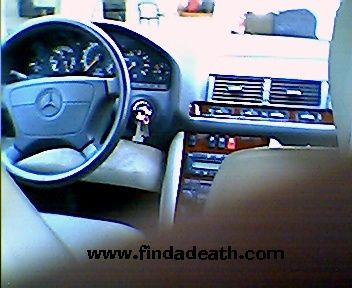 Then this impaled him. 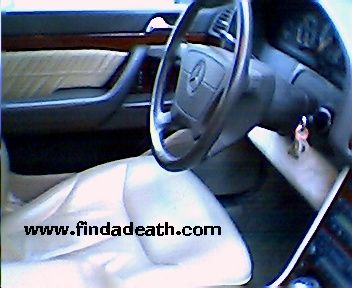 For WHATEVER REASON, they were going really fast when they passed the sign for the Pont de l’Alma tunnel, and entered it. 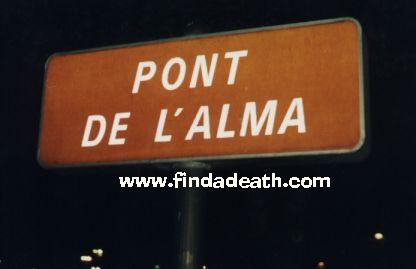 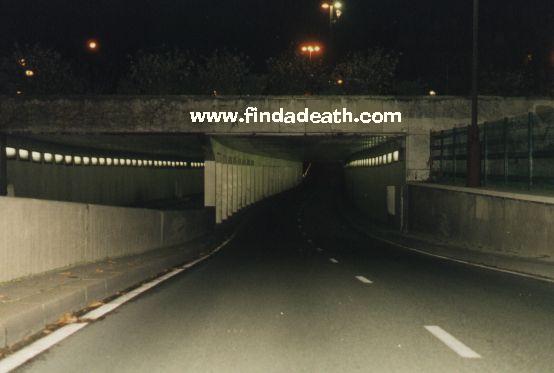 Mr. Paul lost control of the car at 12:24am, and slammed into the 13th pillar inside the tunnel . The car smashed into the concrete support pillar, and rolled over several times, crumpling the roof to door high level, before hitting the right wall  and ending up a heap of mangled metal and broken glass. It wasn’t pretty.  It took between 60 and 90 minutes to free her from the wreckage. She was still alive, as was Dodi’s bodyguard Trevor Reese Jones. Dodi and Henri Paul were killed insantly. The princess was taken the long route to the Pitie Salpetriere Hospital. Doctors worked furiously to save her, but at 4am, Father Yves Colchard-Bosseut read Diana her last rites. She was already dead. Trevor Reese Jones survived, quit the Ritz, and is suing Dodi’s dad for negligence. Hey ho. 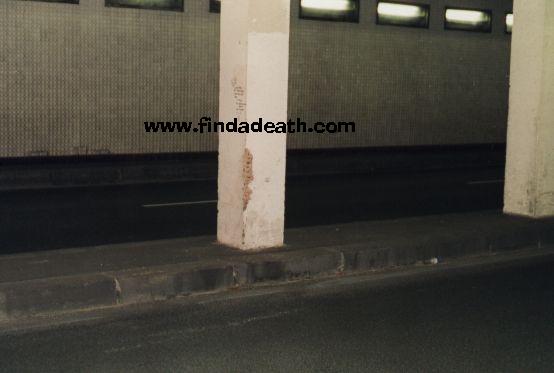 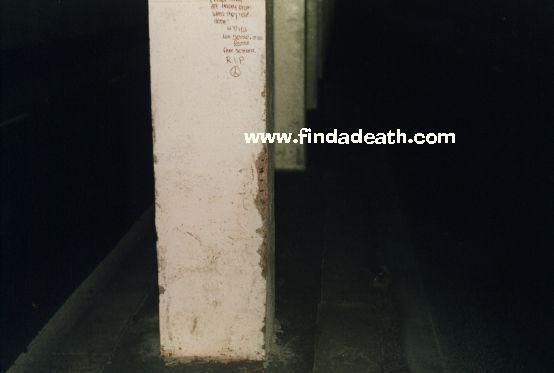 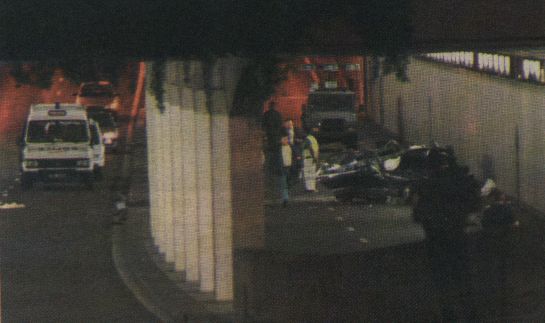 Findadeath.com friend Frankie sent us these photographs of Diana, just after the crash in Paris.  They originally were shown on CBS.  Keep in mind, these are only photocopies of actual photographs.  According to the program, Diana had no injuries to the head, therefore looked fine.  Her injuries were internal.  Here is the scene just after the accident, a doctor tending to Diana, and Diana up close.  Also one more.  Thanks Frankie. 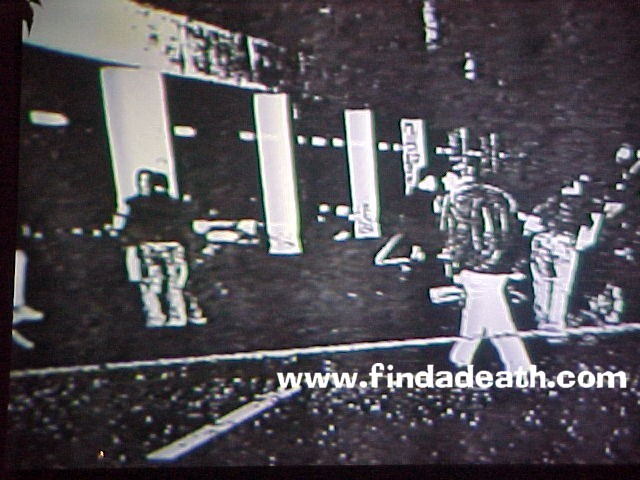 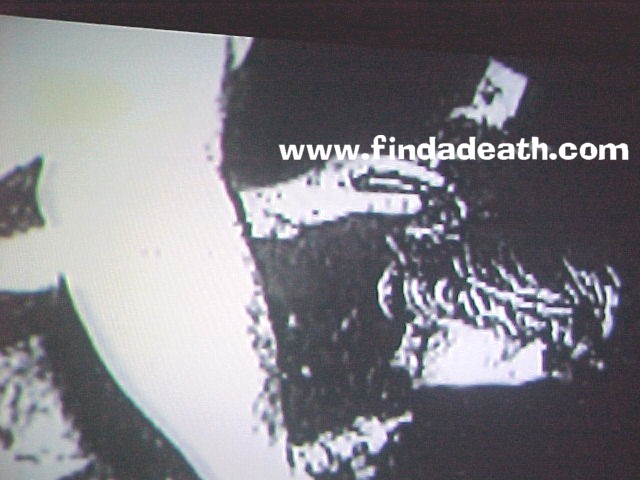 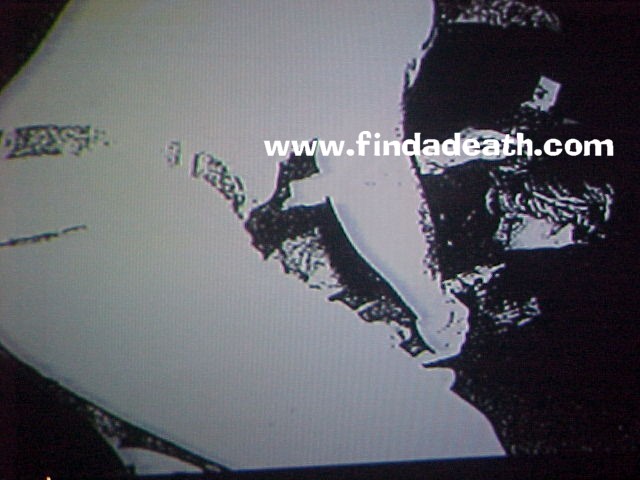 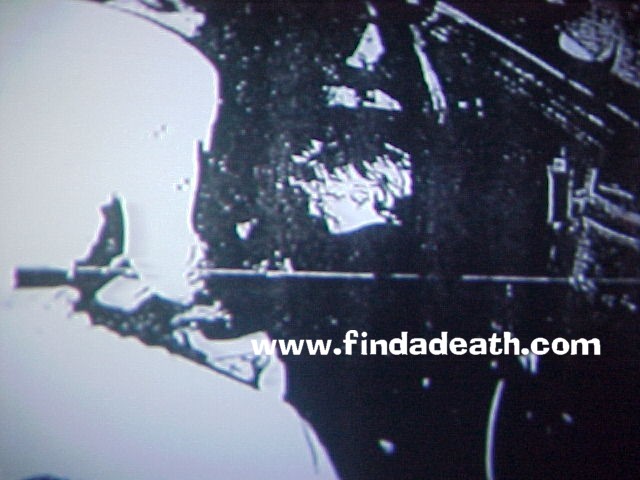 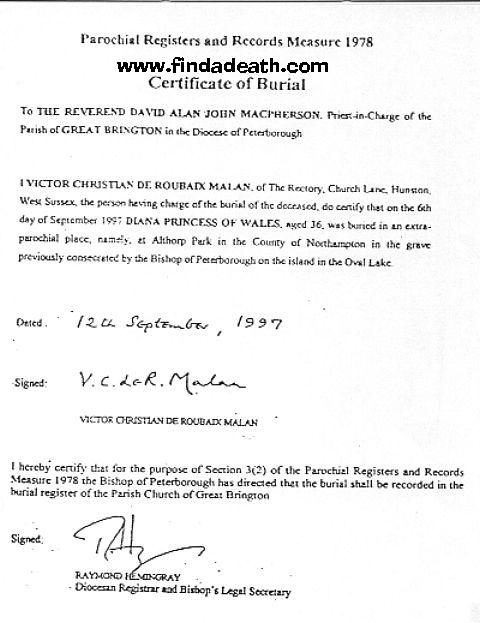 Diana’s body was claimed by her ex, and flown back to London, where she spent the week holed up in St. James’s Palace while London prepared for her funeral. 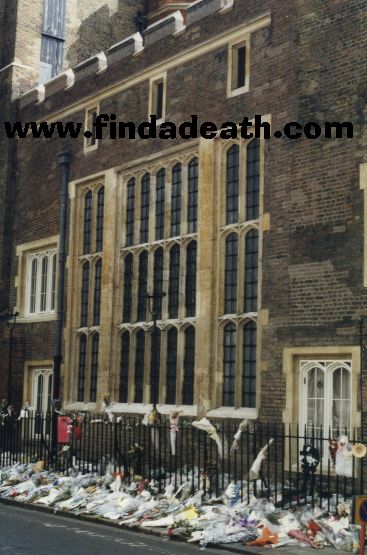 Friday night, she was taken to her home, Kensington Palace, to prepare for the next morning’s event.

A special exception was granted to have Diana buried on “The Oval”, a small island on her childhood home “Althorpe”, in Northampton. She is buried in a teak coffin wearing a black Catherine Walker dress, and in her hands, a rosary given to her by Mother Theresa, who was to die the night before Diana’s funeral. ( talk about your bad timing). The world stopped for her funeral on September 6th, 1997. 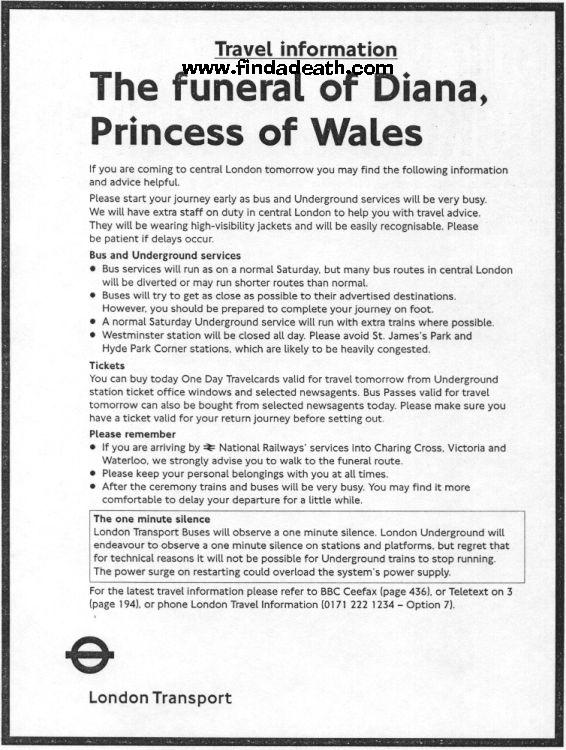 Thousands lined the streets to see her casket pass by. 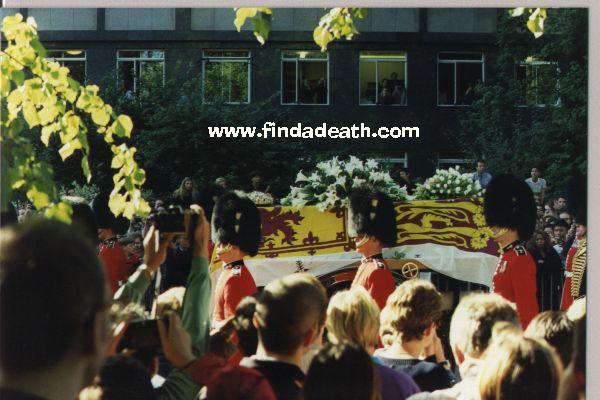 Findadeath.com friend Julie send us this:  I did not know if you had ever got to see the “tour” of Princess Diana’s dresses.  They were here in Houston and me being me I had to go and see them.  What an awesome sight!  I know that you love her as much as I do so  I sent you a picture.

Findadeath.com friend Ray Wright went above and beyonce, and snapped some terrific pictures of Parisian locations relevant to the story.  Ray writes in that these are two shots taken from behind the RITZ hotel, and in this is the security camera 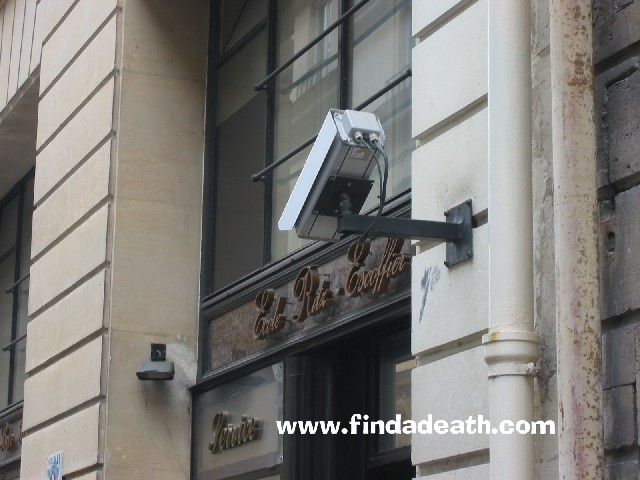 that took that infamous pictures of Dodi and Diana leaving the hotel, i.e.: the last LEGAL picture we have of them alive.  The cameras are above the service entrance.  This shot 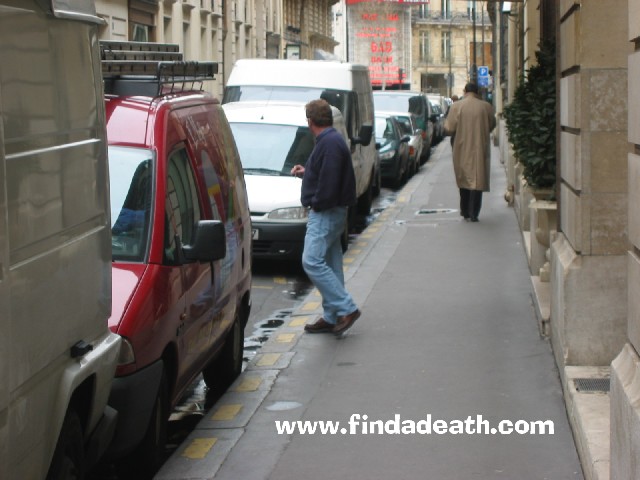 shows where their car was parked as they drove away down the rue Cambon, 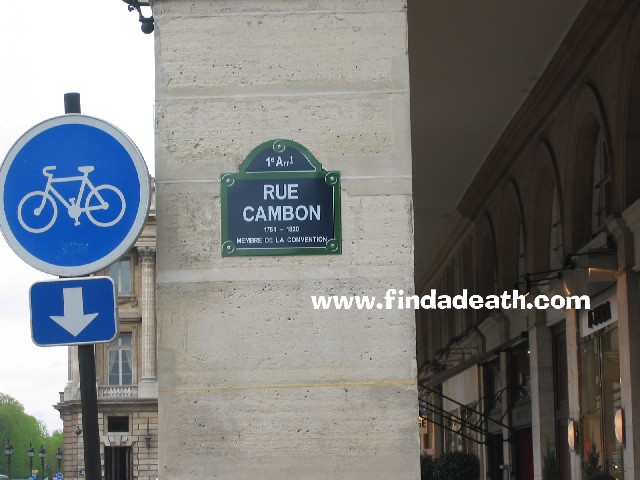 through the Concorde to the Alma Tunnel.

The next photographs are of the hospital where Diana was taken, 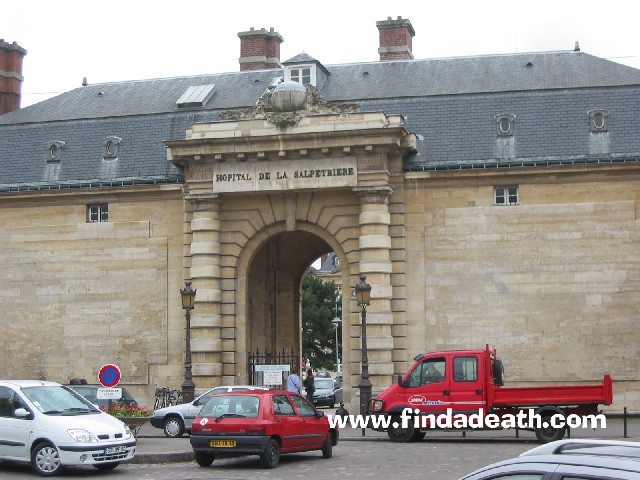 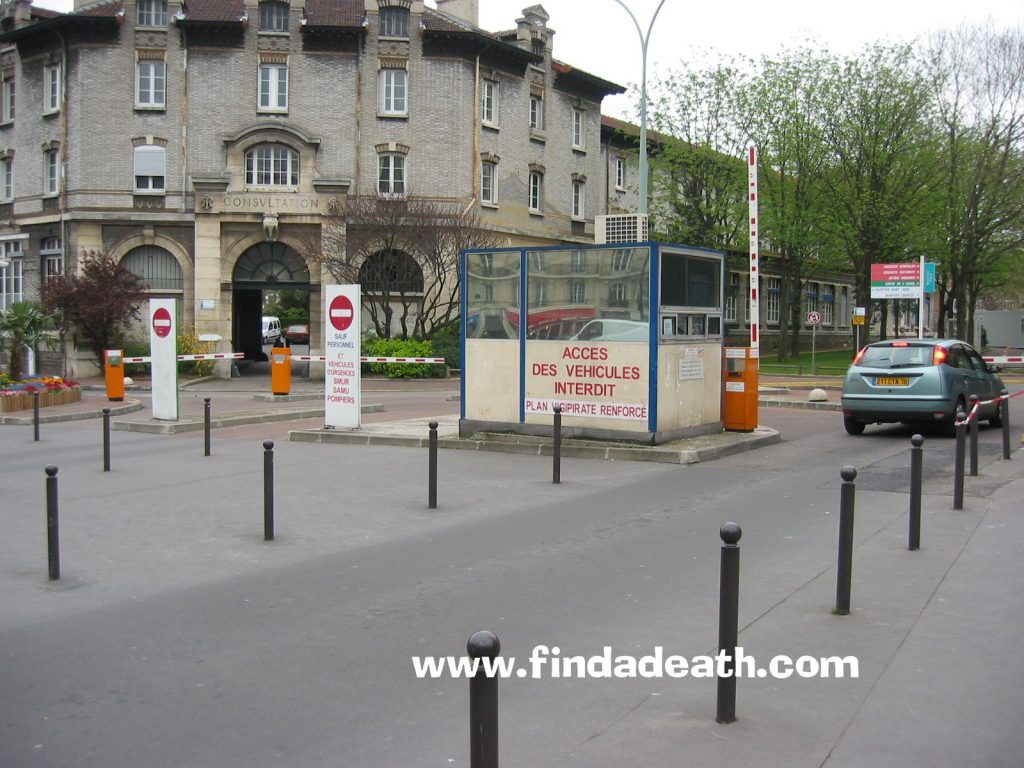 and the entrance Diana was probably taken thru. 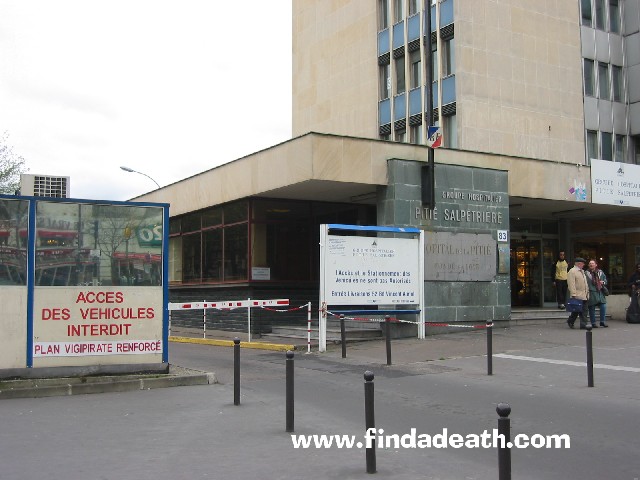 Diana lived in a whirlpool of crazy – you couldn’t avoid getting caught up in it.  Sure, she was hounded by the paparazzi – but she also used the paparazzi as a tool.  Live by the sword?  I don’t think anyone deserves what happened to these people, but in retrospect you can see what led up to it.

By the way, if you want to read a real piece of dish, get the butler’s book.  Its fab, and talks a lot of talk about Diana’s death/funeral/family notification.  Fantastic reading, and as far as I know, factual. The libel laws are very strict in Britain, and there is no way it would have been published if it weren’t.  GET the book.  Oh, and THANK YOU Ray Wright!  Great photographs.