I’ll polish it off myself.

I stole the sign above (it is massive) from a club last Sunday night.  Yeah, I was a bit drunk, and thought I could get away with it.   In retrospect, I am embarrassed, but I got the sign, and that’s what really matters.  That same night, (I must have overdosed on klepto pills) I stole this sign from McDonalds. 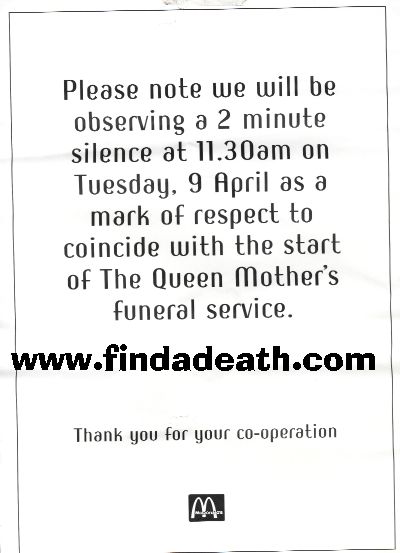 To the Queen, who was having a glass of wine with lunch, “Is that wise?  You know you have to reign this afternoon.”

Well, the old bird finally bit it.  She was a mother, in every sense of the word.  She died at 3:15 Saturday afternoon, at The Royal Lodge, Windsor. 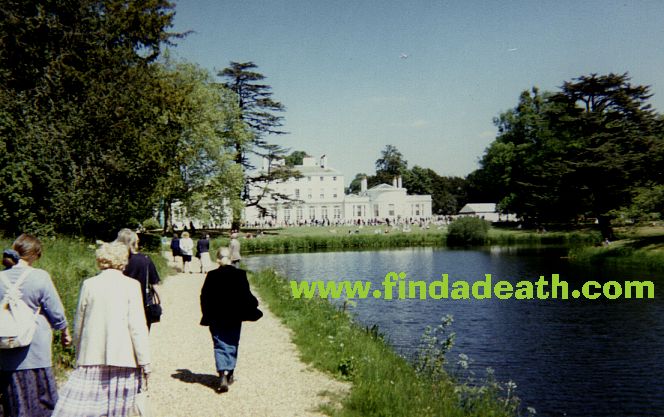 Dead pools across the world are racking up some serious points this week.

The Queen was supposedly at her mother’s bedside when it happened.  A little while before, the Queen Mother asked her daughter to leave her alone for a bit.  When the Queen returned, QM was festooned with pearls and earrings.  She died shortly thereafter.

As I write this, the QM’s casket was taken to the Royal Chapel of All Saints, in Great Windsor Park. 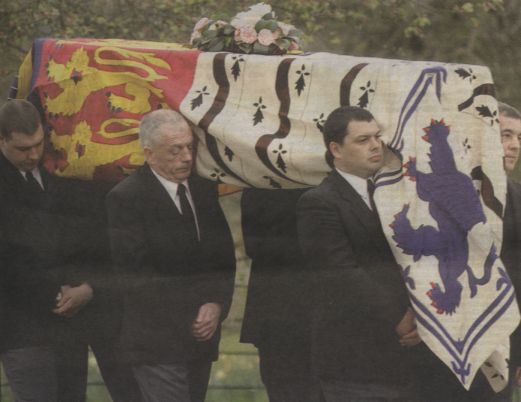 The funeral itself will take place, next Tuesday, April 9.  It’s gonna be a biggie.  I’ll be there, and get you the scoop.  Stay tuned.

Well today was the funeral.  The Queen Mother’s coffin has been on display since last Friday, in Westminster Hall.  The line up was hours long, and there was no way I was going to stand around just to see a box with a flag on top of it.  Same with Nixon.  When he died I went all the way to Yorba Linda, and then they wanted us to wait for hours.  Not even an open casket.  No thanks.

Today’s festivities were good.  I stood in The Mall from about 11:00 a.m., where I could see this view of Westminster Abbey. 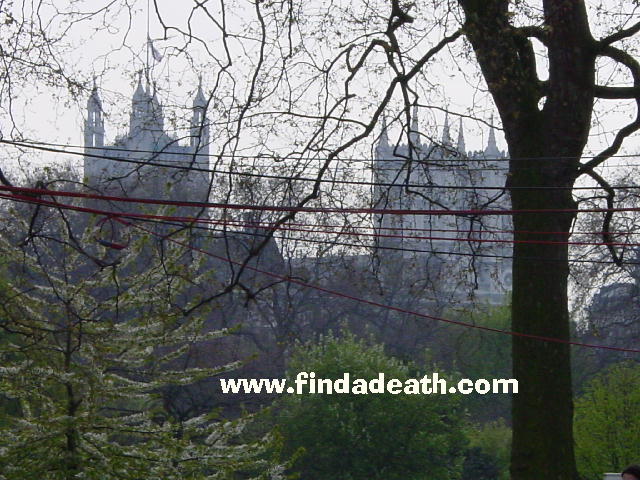 The hearse wasn’t due until 12:45.  I got there early enough to see Charles leave for the Abbey from these gates. 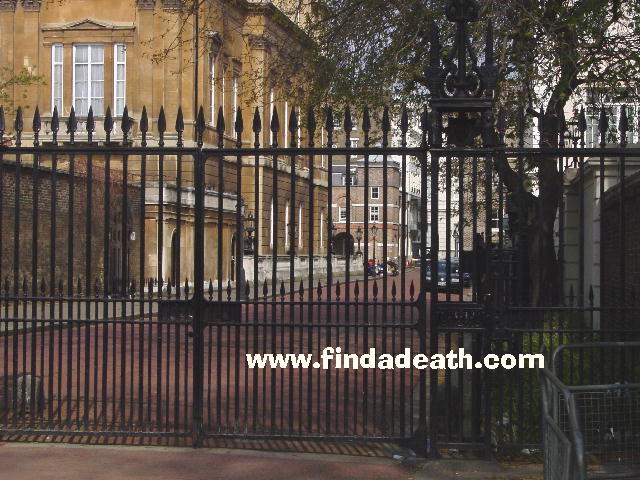 I had a walk around, and saw a lot of the tributes people left in memory of the Queen Mother. 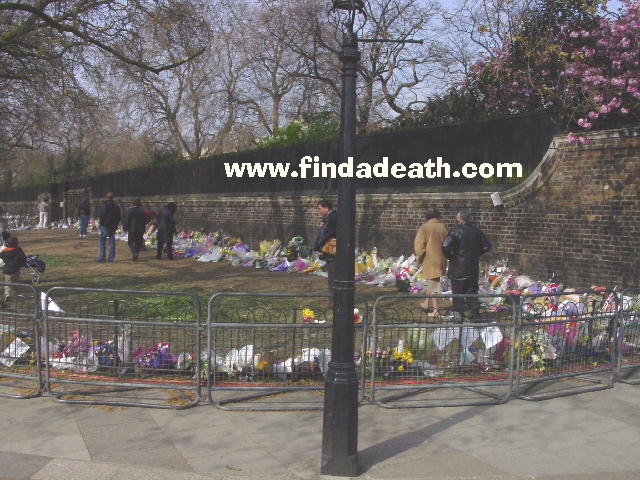 I also saw the stretchers that the ambulance people had prepared just in case. 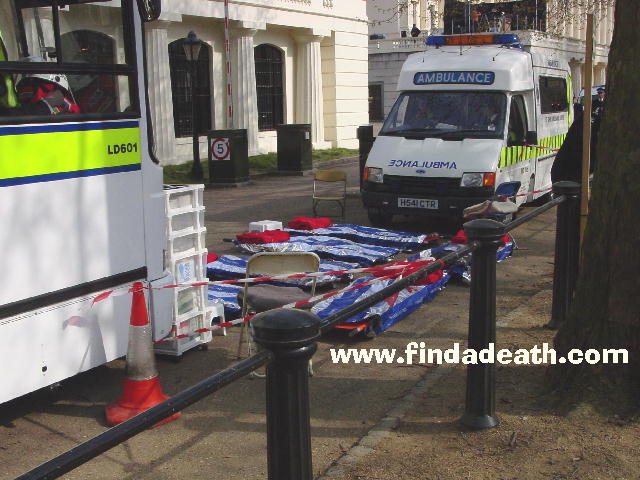 Then I walked over to St. James’s Palace, to check out that window with the ghostly apparition, from the Princess Margaret story I wrote earlier.  Here’s a close up of the window.  Not as spooky, close up. 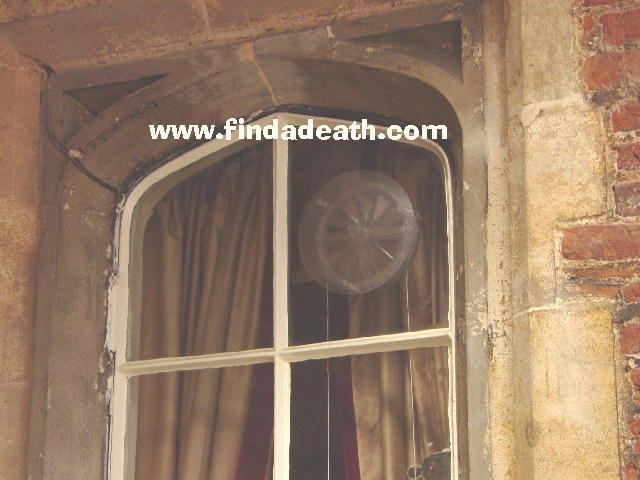 As I stood in The Mall, waiting for the hearse to pass me by, we were fortunate to have loudspeakers up, to listen to the service. 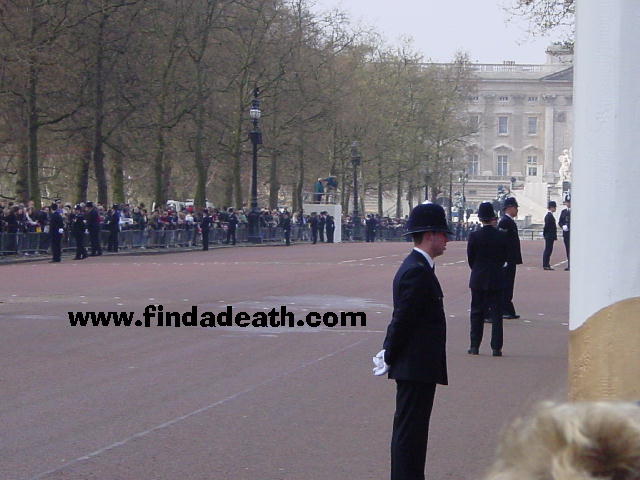 It was a nice touch.  We would have been bored to tears otherwise.

At 12:45, just as we were expecting the cortege, there were military planes that did a memorial fly over. 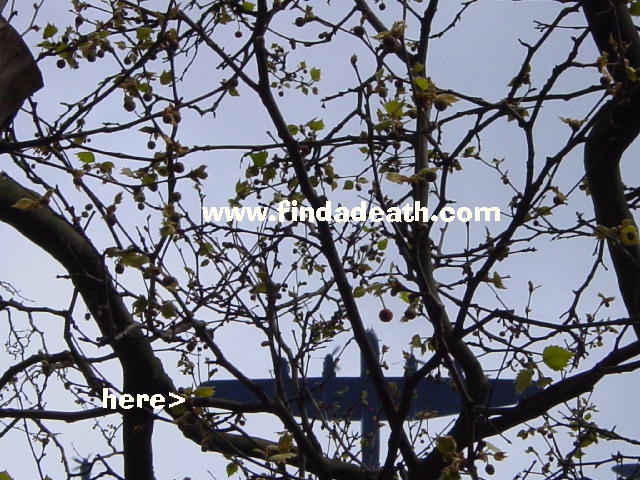 It really was stunning.  I took an mpeg of them, and thanks to Julie you can download it now. Shortly after that, the cortege appeared. 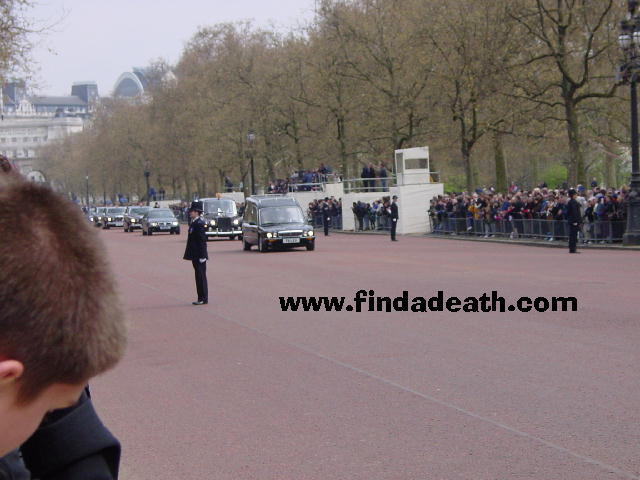 First it was the hearse, with the Queen Mother’s coffin, covered in her Royal Standard. 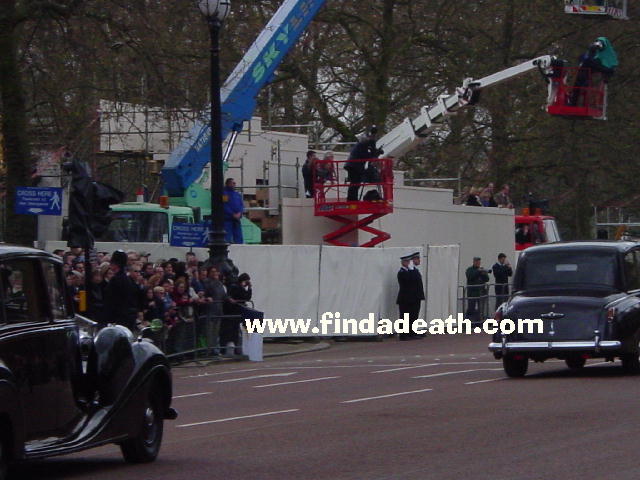 Followed closely by Charles in his car. 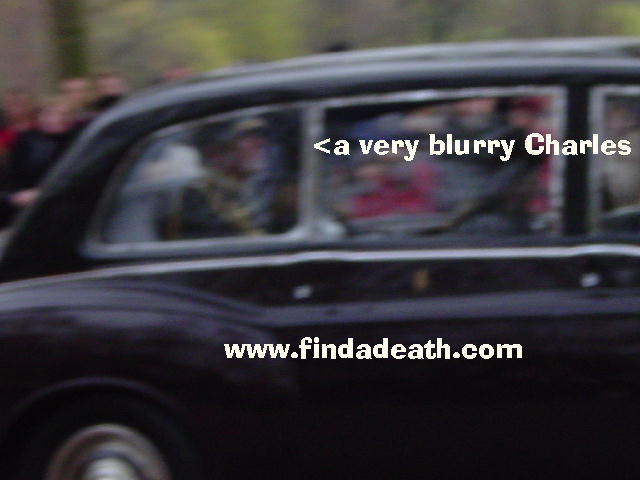 Some of these pictures came out horrible, for which I apologize.  I should have brought my faithful 35mm, and not the stupid digital one.

The next batch of cars were the A list Royals.  The Queen and Prince Phillip. 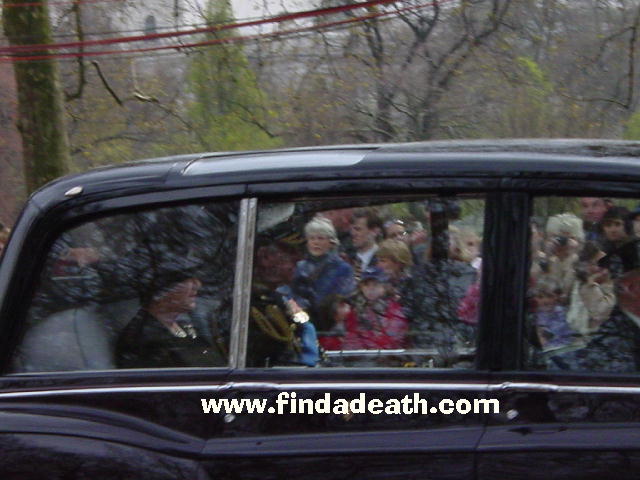 Princes Harry and William, who were very enthusiastic to see the planes overhead. 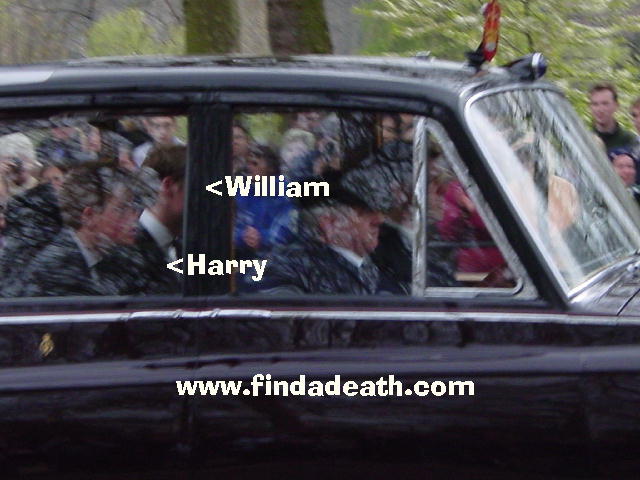 I saw Edward and Sophie, Princess Anne and her brood.  After they passed, that was it. I went home.

Ever the shoplifter (or shirt lifter, depending), I took this sign from the Tube station closest to my house. 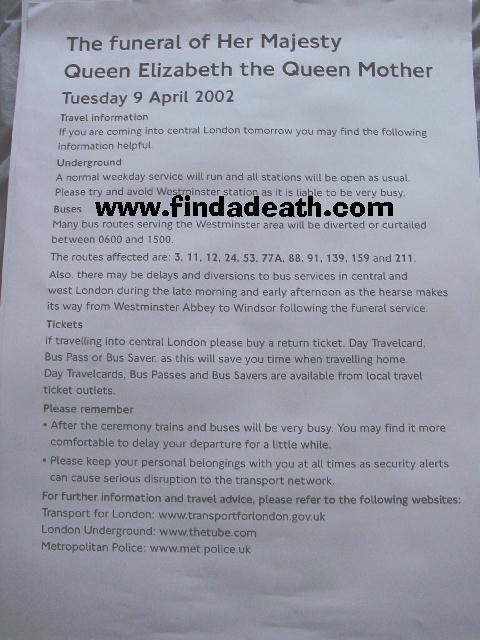 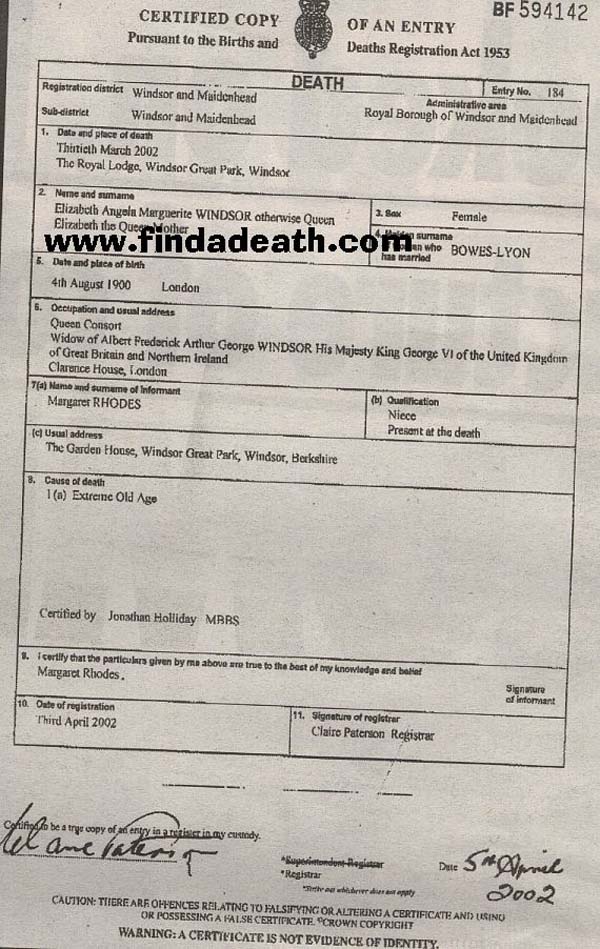 She is buried in St. Georges Chapel, Windsor. 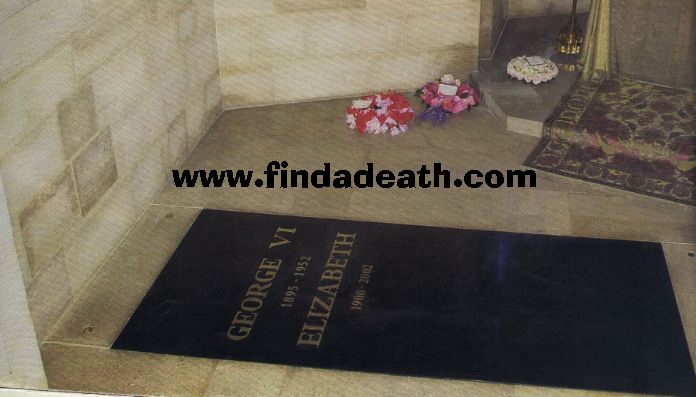 Before her death, there was a exe program going around, to try and keep her alive.  You can get it here.  Its a hoot, I promise.

Findadeath.com friend David Wood also sends us these extracts from a “guest book.”  They’ve really made the rounds, and are hysterical.  Thanks David!

“I think that the Queen Mum and Princess Diana are our very own Twin Trade
Towers.