So the Scarecrow was the last to go, he saw the others go before him. Well, apart from the Munchkins anyway. Sorry if I gave away the fact I’m a mo.  I loved The Wizard of Oz, but generally deny it.  I despise stereotypes, but for you my friends, I will come clean.  Heh heh.

Thank you Bob Siler, big time friend of Findadeath.com, for supplying the information for this story.

As I said, Bolger was the last surviving lead from the 1939 flick. He lived relatively intact (hip replacement in 1984), until 1987. Remember him on The Love Boat? He played a guy that wanted to marry his wife on the ship.  They were both Titanic survivors, and everyone thought the cruise was going to be cursed. Classic television crap. I love it.

Ray was living with his wife of 58 years (no children. Hmm.) in this house on N. Beverly Drive, in Beverly Hills. 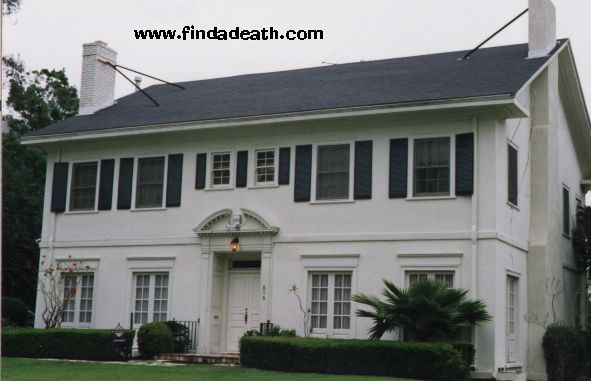 He lived right down the road from Jack Haley, the Tin Man. Honest. Don’t believe me? Here’s a copy of a note that belongs to my brother, Rick Michaels. Thanks Rick! 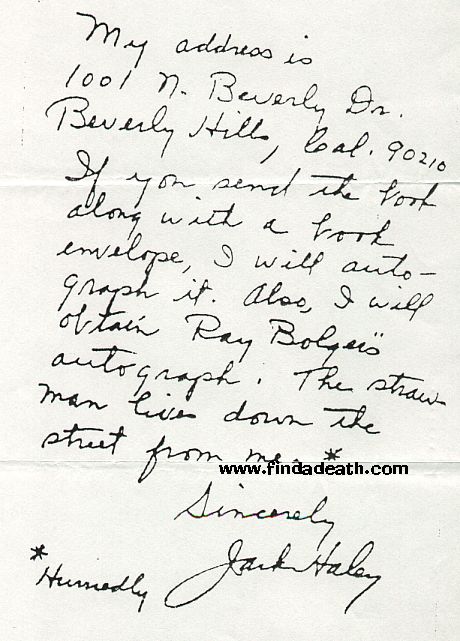 Ray had been diagnosed with bladder cancer, and in late 1986, it got to the point where he had to be put into a nursing home. He moved into the Nazareth House, on Manning Avenue, in LA. 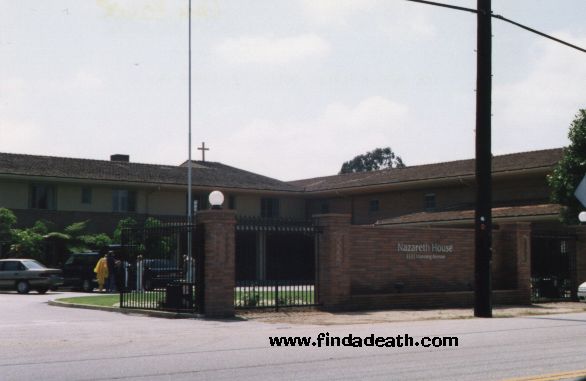 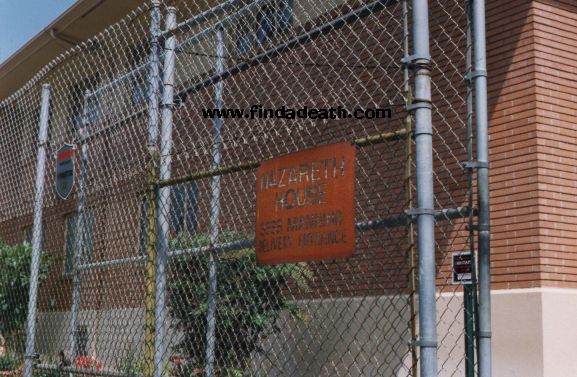 His wife would visit him daily at 2:15. He even celebrated his 83rd birthday (Ron and Nancy sent a card) the Saturday prior to his demise. Maybe that’s what did him in.

On Thursday, January 15th, 1987 – the Scarecrow went over the rainbow like so many others. During his wife’s regular visit, he passed away. He was 83 years old. 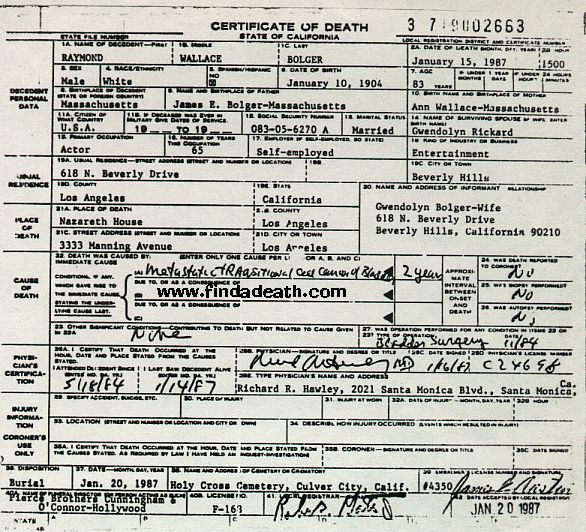 His funeral was held on Monday the 19th of January, at Good Shepherd Catholic Church, in Beverly Hills. 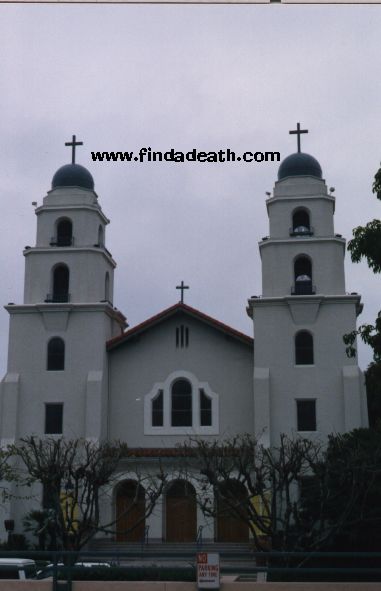 His body was taken to the chapel at Holy Cross Cemetery, and interred there.

Findadeath.com friend Carrie had this report:  “I attended Ray Bolger’s funeral, as he was my favorite thing on Earth.  My next door neighbor did the floral arrangements, as he usually did for anything a Good Shepherd.  I sat next to an ancient Zeigfeld girl at the service, and we chatted at length before the ceremony.

It was a virtual who’s-who of Hollywood royalty.  Danny Thomas, Bob Hope (I know he makes your butt itch, but he winked at me when I returned from communion, and that tickled pink (uh huh) a 16 year old classic movie whore like myself.  I spoke to James Stewart (prior to the opening procession that he was in).  I was so nervous that I spoke very quietly, and I’m sure that the (nearly deaf) actor didn’t hear a word I said, but he was very kind and gracious anyway, Anne Jeffries, Jack Haley, Jr.

Ms. O’Connor [?](Zeigfeld girl) told me that Fred Astaire was supposed to attend, but I never saw him.  He purportedly snuck in to the choir loft, but I am of the opinion that he was too ill to attend – he died a short time later.  Next time I’m in L.A., I will look for the funeral card for Ray Bolger at my parents’ place.  I hope I still have it somewhere!”

Findadeath.com friend Allen send us this:  Hey. I just wanted to let you know that his house was used in the film “Anywhere But Here” starring Natalie Portman and Susan Sarandon. This house is the house that Susan and Natalie visit for an open house, and Natalie makes an illegal phone call from.

Findadeath.com friend Steve Goldstein sent me this FAB piece of trivia, I’d forgotten about: You can add this bit of casting trivia to your Ray Bolger story: as I recall, he was the banjo playing grandfather on the Partridge Family.  Thanks as usual, Steve.