You do a show and go home and don’t realize the impact you’re having. Then one day you’re returning Christmas presents at a mall in New Jersey and you hear people behind you talking. You think, ‘Oh, yeah. I do that TV thing. Yeah.

I have to be honest, I only knew Robert Pastorelli from Murphy Brown. For those of you that never saw it, he played Eldin – the house painter/nanny/guru to Murphy. He was on the show from 1987 to 1994. Pastorelli would later say, “It stopped being fun, so I knew I had to move on. If I had stayed, it would have been only for the money, and that’s not what acting is all about.” So it wasn’t about the money, which is respectable to a degree. There is the other philosophy of “Don’t quit the hit,” which apparently didn’t matter to him. He also had a memorable role in the movie Dances with Wolves, with Kevin (If you build it, they will green light Tin Cup) Costner, and other roles you can check out here.

I was pleasantly surprised when I found out that Mr. Pastorelli was a New Jersey resident, as I am. He was born in New Brunswick, NJ, and raised in nearby Edison. He went to Edison High School, same as Susan Sarandon. 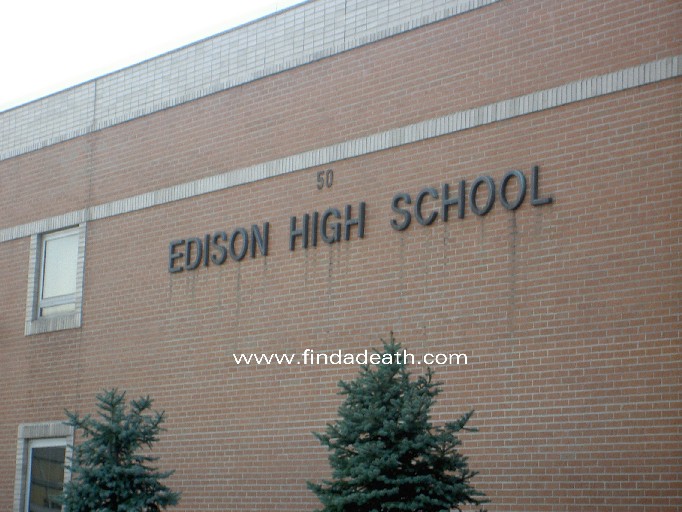 Therefore, I felt that it was my duty to get Mr. Pastorelli on Findadeath.com, so here we are.

At the time of his death, he was living in this very nice house, in Sea Girt, New Jersey. 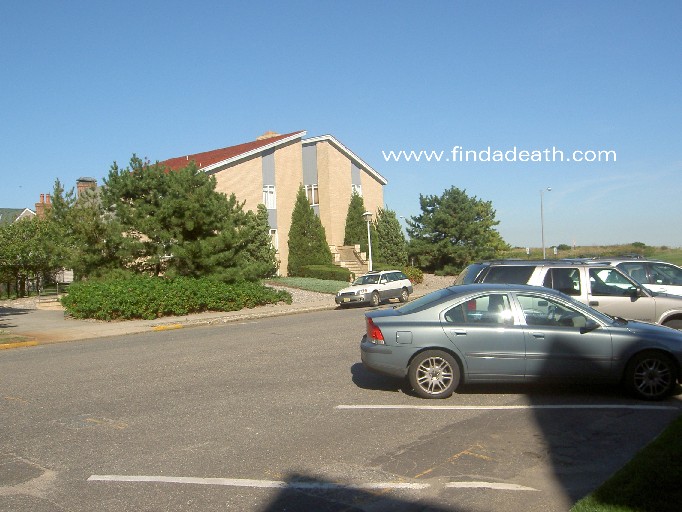 Here are the steps to his front door, 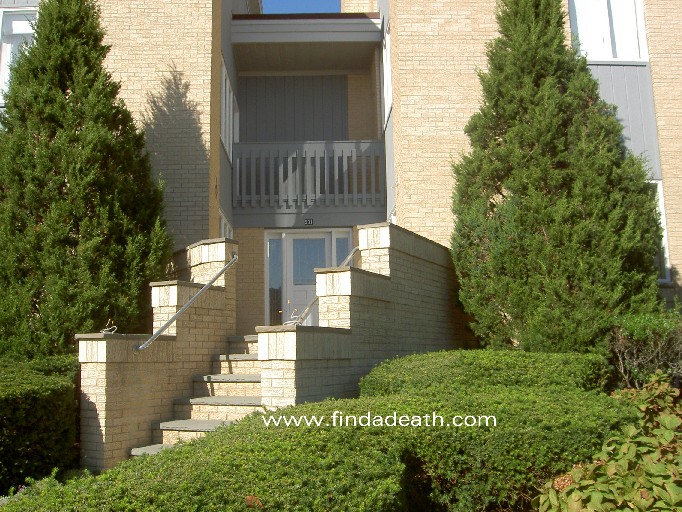 and this is another view from the street. 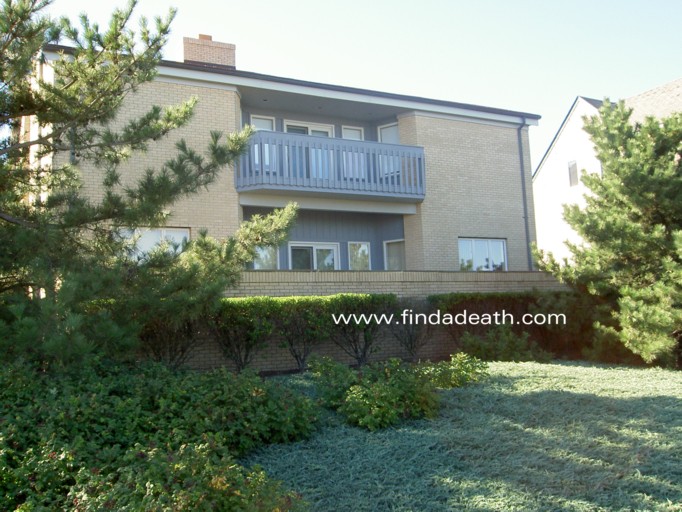 He also owned a house in Los Angeles, in the Hollywood Hills. 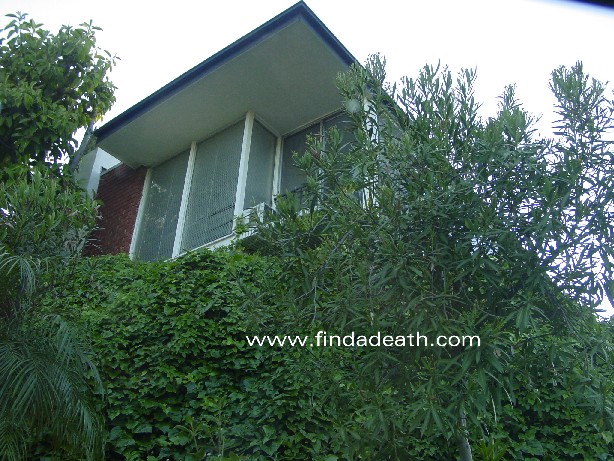 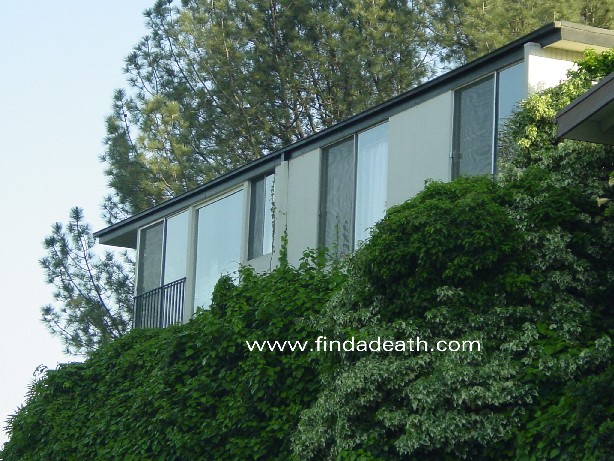 I believe he lived there with his assistant, Mirna Ortiz. I think he drove this vintage car, 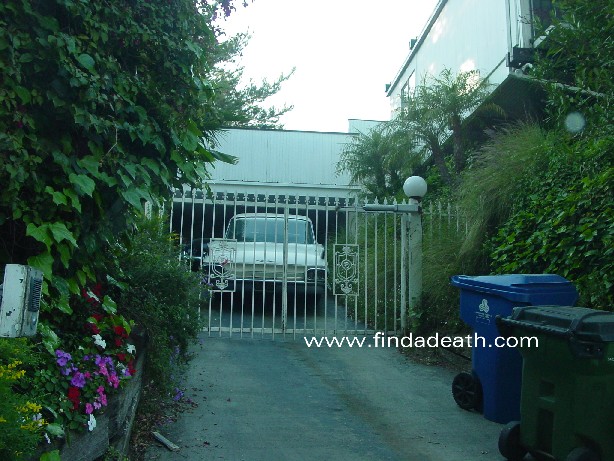 past this poor excuse for a mailbox, every day. 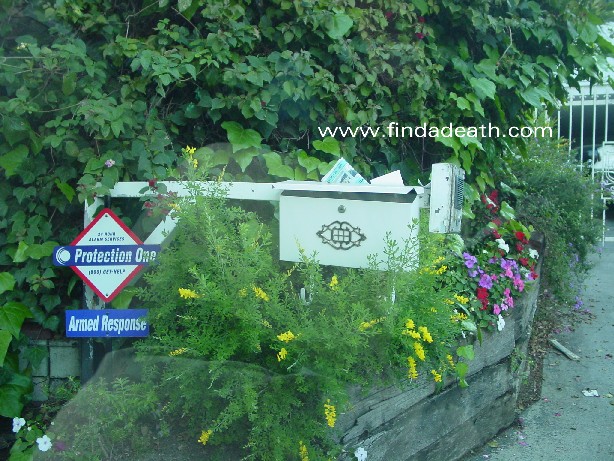 In 1999, his live in girlfriend, Charemon Jonovich, committed suicide. She was 25. Supposedly, during a heated argument, she held a gun against her head, and threatened to shoot herself. He says, “So shoot yourself.” The drama queen did. Right in front of Robert, while their daughter slept in the other room. According to some reports, the police ruled her death as an accident, but some questions still went unanswered regarding the circumstances.

On the morning of March 8th of this year (2004), Pastorelli dressed himself in brown shoes, black socks, black trousers with a black belt, black underwear and a wife beater. By 2:20 p.m., he was dead. According to his official autopsy report, courtesy of the Smoking Gun:

“The directory was found lying supine at the doorway to his bedroom and bathroom. His lower extremities were in the bathroom on the tiled floor and his torso was on the carpeted bedroom floor. His legs were extended straight with his feet approximately 1 feet apart. His left arm was extended and perpendicular to his body. His right arm was at his side. According to police at the scene, the decedent was originally found by his personal assistant, seated on the toilet (Pastorelli, not the assistant) slumped over. The 911 operator she was speaking to instructed her to move him to the floor and when she did, she found a syringe in his right arm. She removed it and placed it in the sink.” Ew. He had a bit of puke on his trousers, and – scandal –  he wore a toupee.

According to friends, he had been off drugs for fifteen years, but had recently started using heroin, probably fallout from the Charemon saga. Whatever the reason, Robert Joseph Pastorelli was dead at the age of 49, the cause of death acute cocaine-morphine (heroin) toxicity; an accidental overdose. 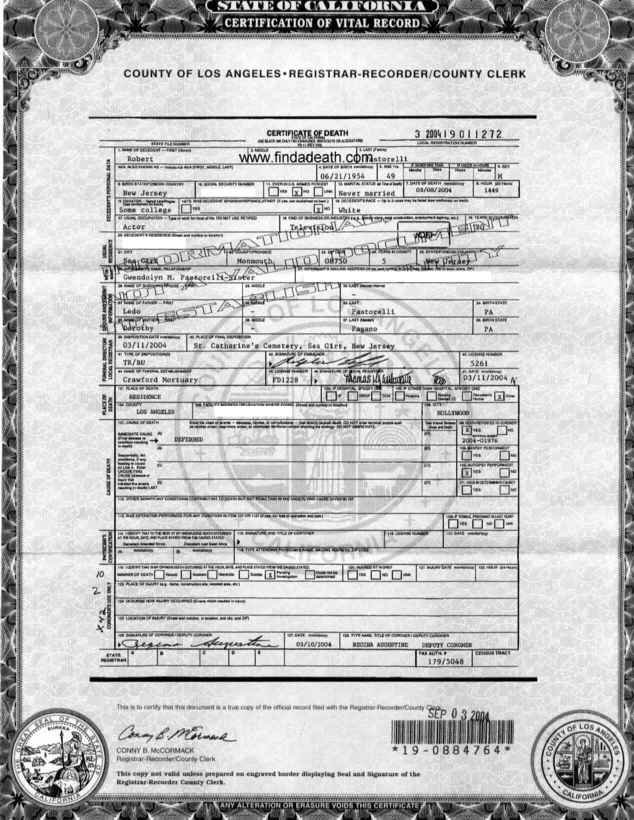 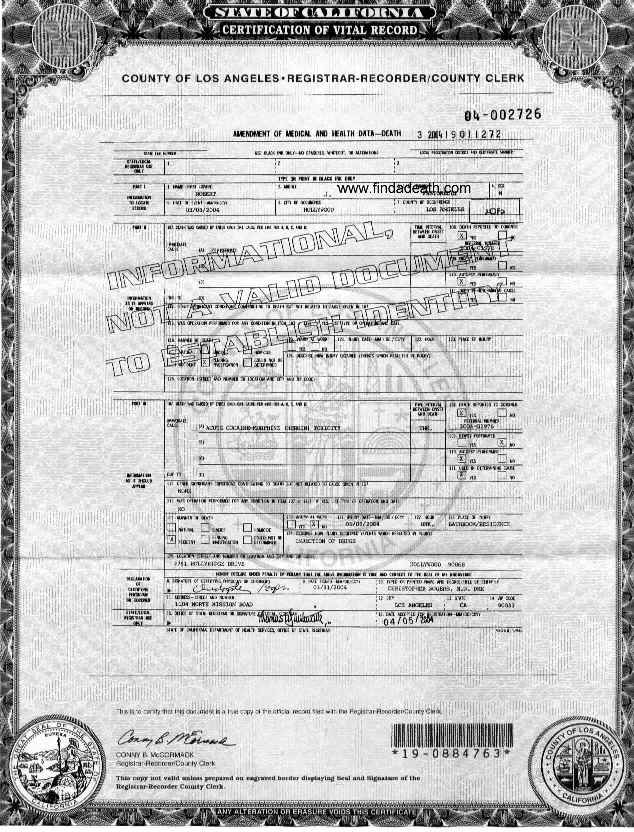 Upon hearing of his death, director F. Gary Gray stated, “Robert was a true professional and a total delight to work with. My heart goes out to his family, and he will be sorely missed.” Gray had directed Robert in the movie Be Cool, a prequel to Get Shorty. Pastorelli had completed his scenes in February, and by all accounts, was a pretty decent guy. They were filming Be Cool all around Hollywood earlier this year, and here is a horrible picture of John Travolta and Uma Thurman in a car that you cannot see, being towed down Hollywood Boulevard during filming. 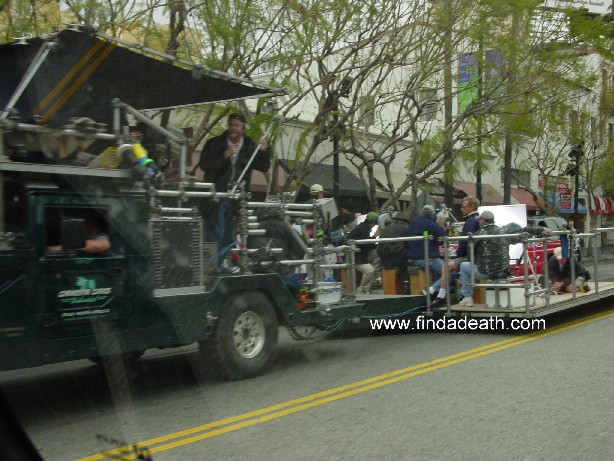 Pastorelli was interred at St. Catharine’s Cemetery, in Sea Girt, in this mausoleum. 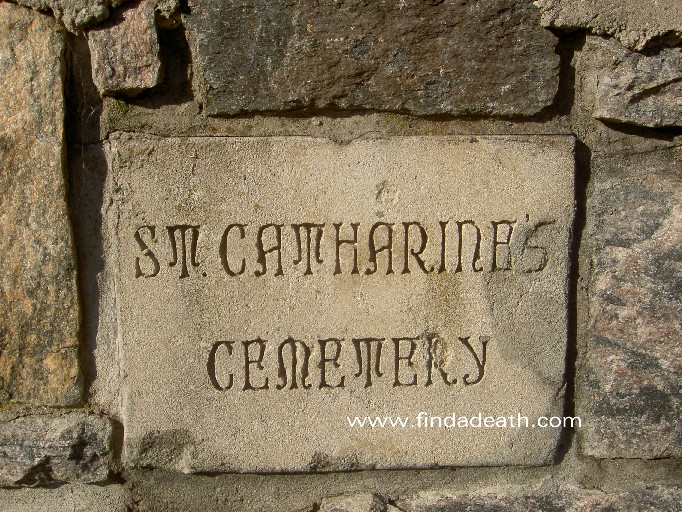 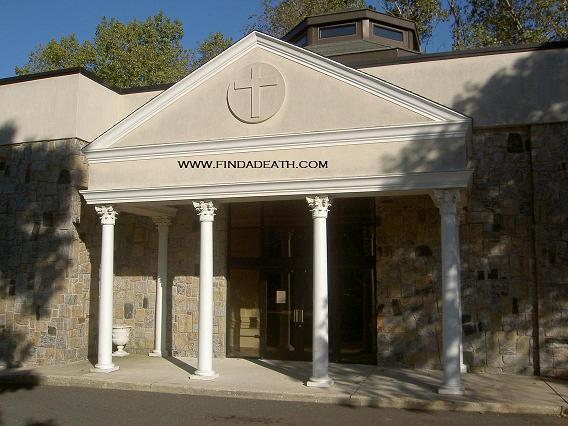 Look what someone left for him at his marker. 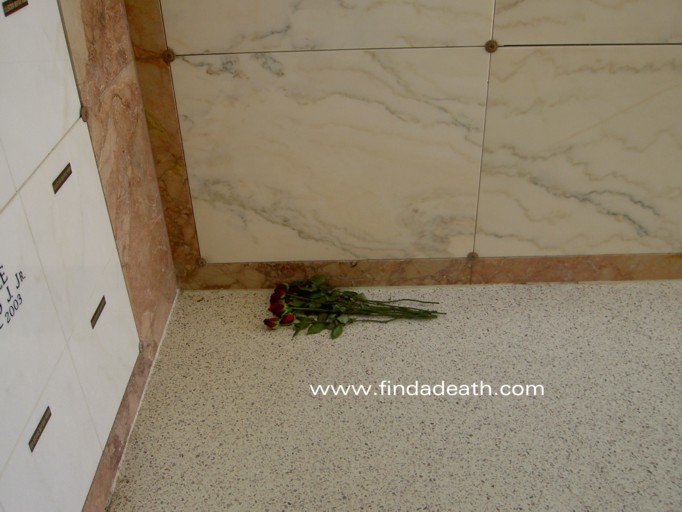 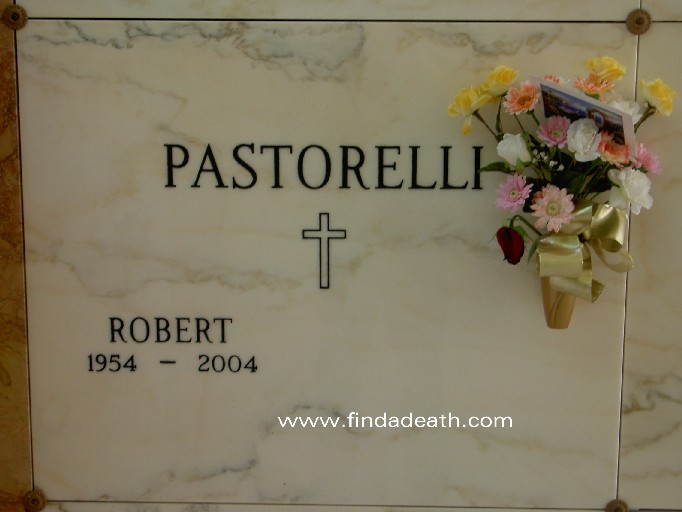 I don’t have any funeral details, but I do know that Glenn Close was there. They had done the TV movie The Ballad of Lucy Whipple together. There was also a memorial at the Continental Club.

Thanks to the kind folks at the cemetery, for letting me in to see his crypt after visiting hours. Thanks especially to the nice lady that gave me the right directions to the cemetery, which was in the middle of fucking nowhere.

To anyone that has never been to Sea Girt, take a trip. It really is a beautiful town, with a nice big beach. 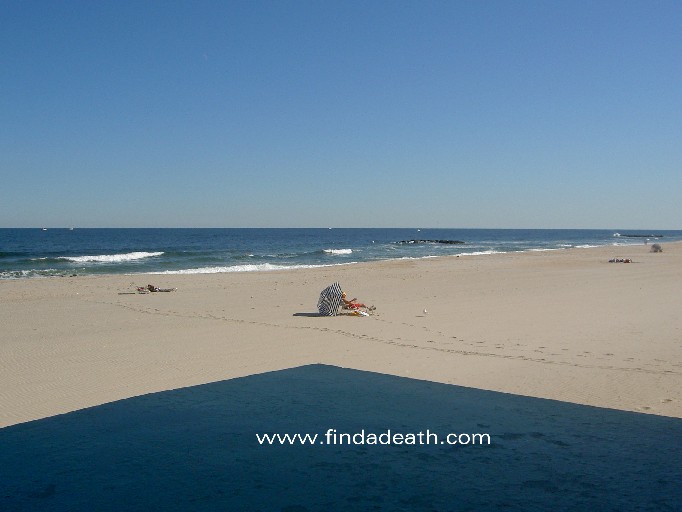 Rest in peace, Eldin. Poor guy. Worse is that his daughter is now an orphan.

BTW, for anyone interested in getting Pastorelli’s autopsy report, go to http://www.celebritycollectables.com.You’ll find it there, along with a lot of other cool stuff. Tell them FAD sent you.

To those of you out there that have sent emails telling me that the house in the pictures is not his, it is the house at the address listed on his death certificate. If you have different pictures, feel free to send them in. K.

Trivia:  He was once an amateur boxer, but his boxing career was cut short when he almost died in a car accident on his nineteenth birthday.

More: Findadeath.com friend Johnny sent in a link about a near death experience Pastorelli (and other celebs) have experienced.  Thanks Johnny.

This just in, September 23, from Findadeath.com friend Pat:  Hi Scott:  Love your site, and the article on Robert Pastorelli.  I am a NJ native also, so that is part of the reason I read the bio. I am writing because my HS boyfriend is also buried in that same cemetery. I go there every few years or so and I had to laugh because the mention in the middle of nowhere. When I tried to find it a couple of years ago it took me forever. Next time I go there I will look for Robert Pastorelli’s mausoleum.

BTW, Sea Girt is a real moneybags town, what’s his name from pro football lives there, oh gosh that’s going to drive me crazy. Anyway, keep up the good work and when I get some money I will send you some.  Pat from Forked River, NJ

Thanks for the email, Pat. Regarding Sea Girt, I believe NFL coach Bill Parcells lived there for a while. I don’t know if he still does. Glad you liked the story.

This just in, from Find a Death friend Bob:  Hey Scott – Great article on Robert Pastorelli. Such a shame – he was really cool in everything he did. I went to Edison High School as well – Class of 96, and my Dad went there with Robert. They used to get suspended together for smoking in the bathrooms. Took a drive this past Sat. Nice quiet spot, but a real hard time finding the cemetery – it really is in the middle of nowhere.  Bob

Thanks for the info, Bob!

This just in, December 2004, from Find a Death friend Rob:  Hey, I love your site and have been a fan for about a year or so. I saw your bio on Robert Pastorelli and just wanted to add a few things. First, everyone is right, it is Bill Parcells in Sea Girt and yes, Sea Girt is a very upscale community. Sea Girt is also about 6 miles south of Asbury Park, and this death hit the local music and entertainment community hard. There was a memorial/fundraiser show for him (I think a college collection or something) at the Stone Pony shortly after his death. I never met the man, but the folks in town who knew him said he was a righteous guy and a true friend to the arts community.