I couldn’t have put it better myself, Jan. But I’ll try anyway.

His birth name was John Robert Rietz, and he played the father of the clan for the entire run of The Brady Bunch, and every other incarnation it had. Remember “The Bradys?” I think they dubbed it, “Brady something.” It was awful. Thing was, it could have been good, but everything that happened to them was catastrophic, and summed up in one episode. I recall one episode where they had to move the house because of some development being built. Within the hour, the house was sawed in half and relocated. Here’s what the real house looks like today. 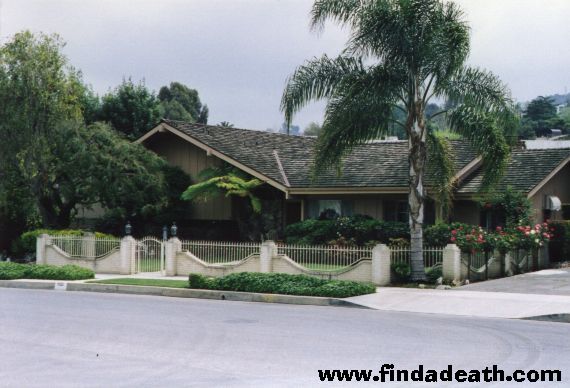 It’s on Klump and Dilling, in the valley. Really close to where Robert Blake’s wife was killed.

Reed found The Brady Bunch mildly offensive to a serious actor such as himself. He had many arguments with the show’s creator, Sherwood Schwartz, regarding the “lame” scripts. Often he would leave the set in a huff and end up in a bar near the Paramount lot, downing Scotch.

He opted to live in Pasadena, rather than the more posh Beverly Hills, or Bel Air, and this is his house. 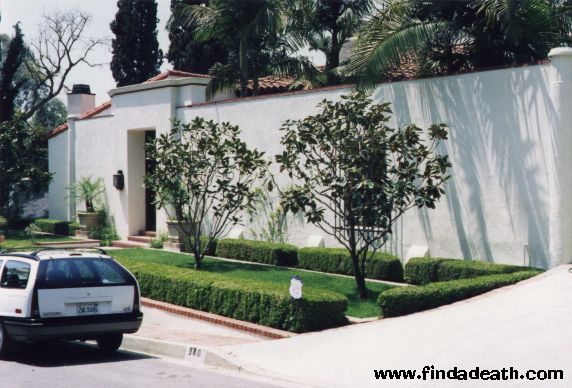 Here are better views of the steps, and the front door. 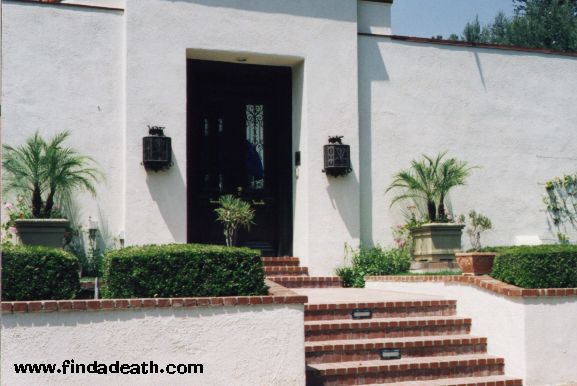 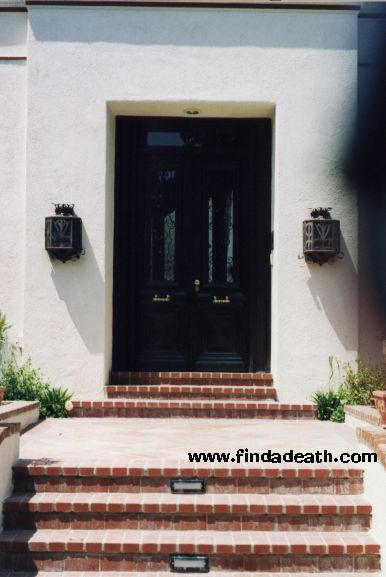 Reed had colon cancer for six months. He eventually checked in to the Huntington Memorial Hospital, in Pasadena. 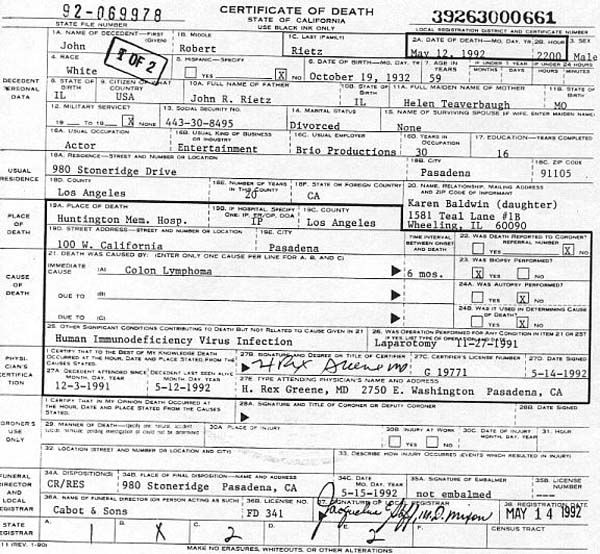 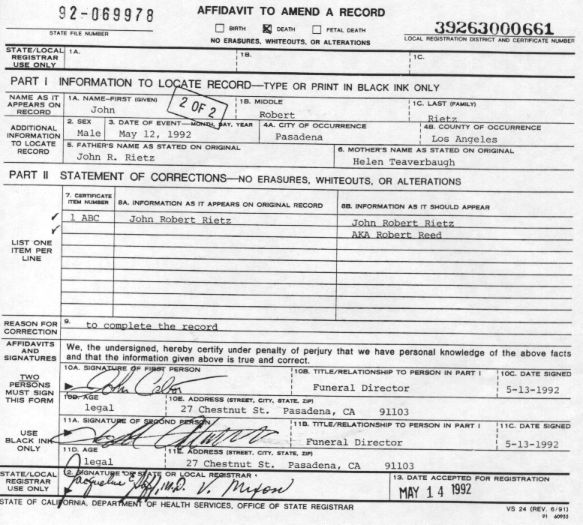 Enter Geraldo Rivera. On this media genius’s talk show, Now It Can Be Told, he revealed that Reed’s death certificate stated that he was infected by the HIV virus. The former Jerry Rivers managed to drag out a “confidante,” a bartender in Reed’s local gay bar, and another “close friend,” to dish the dirt on the poor guy.

According to his death certificate, he died of cancer. He had the HIV infection, but it did NOT contribute to his death. 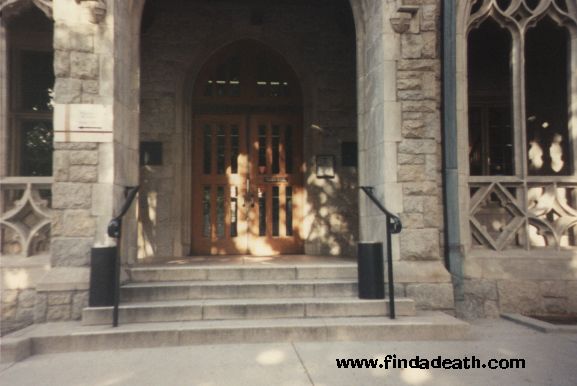 He was cremated, and taken back to Chicago by his daughter (yes, he was married once in the 50’s), and buried in Memorial Park Cemetery in Skokie, Illinois.

Trivia: Sherwood Schwartz, the creator of this show, and of Gilligan’s Island, originally wanted to cast Gene Hackman as Mike Brady. Ewww.

More: Reed got an Emmy nomination in 1975, for playing a transsexual on the show, Medical Center.  He was also in that FANTASTIC television film, Boy In The Plastic Bubble. And who could forget Nurse, with Michael Learned?  I met Michael, and showed her a still of herself and Robert, on the set of Nurse.  She just said, “Aw, Robert,” and stroked his face.  I thought that was really touching.

Even More: Eve Plumb, who played disturbed sister Jan, was once asked which episode of the show was her favorite. Her reply? “The last one.” I thought that was pretty funny.

Here’s a photo of a few of the Bradys and me, when I met them in Chicago a couple of years back. 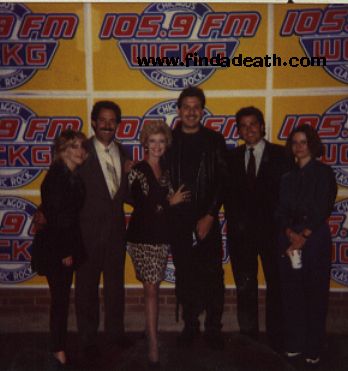 They charged me 5 bucks to stand there for it.  There’s Flo, Chris Knight, Barry Williams, Eve Plumb (with a drink) and Susan Olsen. I’m not telling you why Ms. Henderson jammed her way in on that side of me. I will say that a life long ambition was about to come to pass. It didn’t. Bitch.

Findadeath.com friend Clint Ford sends in:  About Robert Reed, I watched a Biography on his life, and Sherwood Schwartz was telling a story about Bob from when he was on the original Brady set (and I’m paraphrasing Mr. Schwartz’s story, here):

There was one episode where Alice and Carol were making some strawberry desserts in the kitchen. The script called for Mike to walk in and say, “Wow, it smells like strawberry heaven in here!” Bob Reed looked over the script on the set, and upon reading the line — he quietly closed his script book, went to his trailer, and locked the door.

I knocked for ten minutes before he opened up. Finally, when he did, I asked him what the problem was. Bob said, “What’s the problem??” I’m supposed to say “Wow, it smells like strawberry heaven in here!!” I quipped back, “Yeah, so?” Bob became furious. “SO?? Sherwood, are you ignorant, or do you honestly not know that strawberries, when cooked, have NO aroma??”

I told him that I, in fact, had not known this– and I begged him to shelve his pride about is, and just do the damned scene. Finally, after hours, he agreed to do the scene. But Bob had the last laugh. When we were finally rolling, and he entered the kitchen as Mike Brady– he changed the line, saying, “Wow, I feel like I’ve died and gone to strawberry heaven!” –and that’s what we kept.”

I didn’t know that Reed was a kitchen queen.  Thanks for sharing, Clint!

More from Findadeath.com friend Kevin Hassell:  Here is some more info about Robert Reed, taken from the book, “BRADYMANIA!” by Elizabeth Moran:

Florence Henderson recalled the time they were shooting a scene where Reed was supposed to be getting stuff out of the refrigerator. The script called for him to drop an egg and slip on it. Reed said that it was total nonsense, and it would never work. Florence told him, “Before you shoot something down, try it”. So when Reed finally went through with the scene, he actually dropped an egg and took a fall.

Ann B. Davis said of the incident: “I can add to that story, because Bob was making rather a fuss! I swear, he hit the ground before the egg did! And, once I found out if he was all right, that he didn’t hurt himself, I said, “Do you think you can play it now?” And he looked up and said, “You know, all the way down I was thinking I deserved this!”

May 2002: An interesting personal note, from a friend of Robert Reed’s:

There’s a massive amount of misunderstanding concerning the actual cause of Robert’s death. Even the IMDB website lists Robert’s death as “AIDS related complications.” He was HIV positive, but the chemo treatments he took at Huntington Hospital would have seriously damaged his immune system also.

Robert’s parents, Johnny and Helen Rietz, owned a small farm just outside of Muskogee, and Robert grew up here. He was frequently back here, seeing about his parents and helping out around the farm. In about 1970, Mr. Rietz developed a serious asthma-like lung disorder. At that time Robert sold the farm, and his parents moved into his house in Pasadena.

From the mid-sixties to the mid-eighties, Robert lived in a very large three story brick house, located at 1210 South Arroya Blvd. in Pasadena. Yes, it was a mansion!

Mr. Rietz passed away 2 February, 1975. Mrs. Rietz returned to Oklahoma to live during the early eighties.

In the mid-eighties, Robert sold the house on South Arroya, and bought the Spanish style house on Stoneridge. That’s the house featured on the website.

Please don’t think I intend the following as any observation or criticism of any person. I do not. I’m telling you Robert’s own personal attitude and thoughts; his own views on his own life.

Robert Reed totally despised and hated being a homosexual man. He considered his homosexuality as an “illness” or a “condition” which he wanted to suppress, and even hoped to find a “cure” which would rid him of this “disorder.” Again, I am not expressing a criticism of anyone. These were Robert’s feelings as expressed in confidence.

The fact that he could not accept his own sexual orientation led to a great deal of angst, emotional conflict and sadness in his life. It prevented his ever being a truly happy person. We can only hope that in death he has found the peace of mind which eluded him in life.

Well, this has gone one quite enough! Hope I’ve clarified a couple of things for you and not caused any misunderstandings.

Thank you, Rita.  I do appreciate your frankness.

This in from Findadeath friend Jeff:  The Brady Bunch show that was filmed in Hawaii, I think it was 1972.  Recently, the scenic lookout where Bobby squirted Peter with a water gun, was close to an area that kept lifeguards very busy recently during some winter swells (big waves).  The location is the Halona Blow Hole.

ALSO, the hotel that the Brady’s stayed in was the Sheraton Waikiki Hotel. This is the same hotel where auditions were held during the recent US Search for season 3 of American Idol.

Findadeath.com friend Michael Hansen sends us this:  Robert Reed was once married to a woman named Marilyn Rosenberg for two years, in 1957. They had a daughter who appeared in the Marcia Slumberparty episode of “The Brady Bunch.”

Susan Olson (“Cindy”) said she knew Robert Reed was gay when she was 5 years old.

And Findadeath.com friend Opus sends us this:

I read when Robert Reed died, that he died of complications from AIDS.  Maybe it was a Geraldo thing, but please know that Geraldo never went by the name of “Jerry Rivers” (check out your precious www.snopes.com to verify).

Jerry Rivers is another HUGE urban legend thing that just annoys the shit out of me, as everyone I’ve ever met who used to live in NY also “met Geraldo” and “called Geraldo on the Jerry Rivers name thing.”  I don’t even know who to believe any more.