I learned early on, having known the most handsome, successful, Gary Cooper, Clark Gable, Robert Taylor, don’t ever spend too much time looking in the mirror.

You can find all about Robert Stack’s career on his page on the IMDB here.

At the end, Stack was found Wednesday, May 14th, 2003, by his wife, Rosemarie, slumped over in a chair in his Bel Air home. 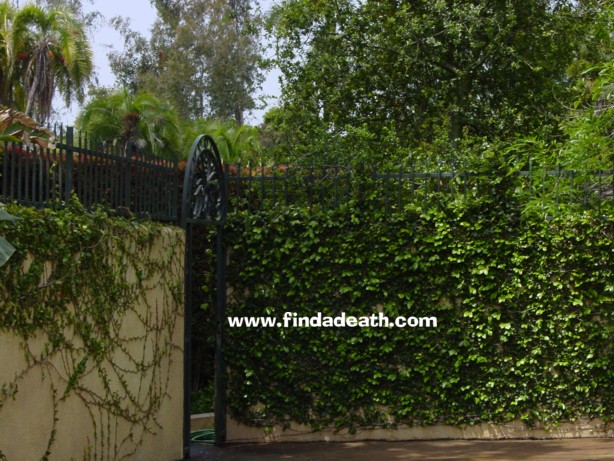 The home, completely invisible from the road, is located behind this parked car. 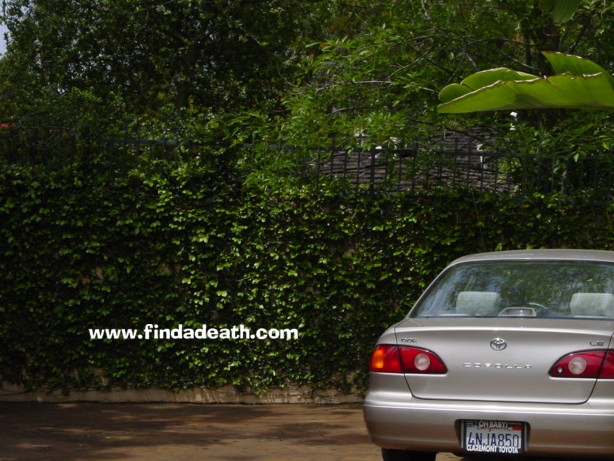 You can’t see much of it, just over the hedges, but here’s his mailbox. 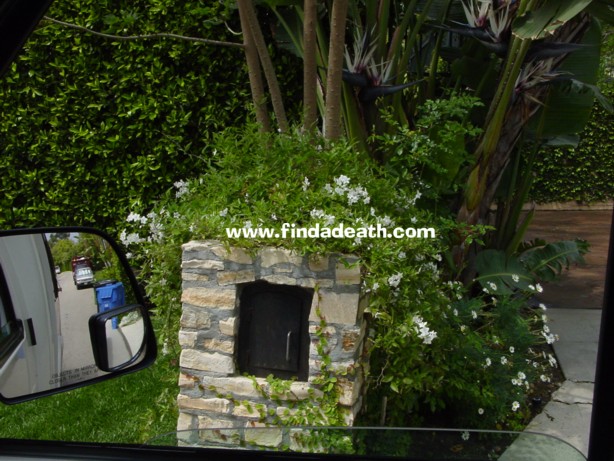 There is another driveway to the house, and this is all you can see in it. 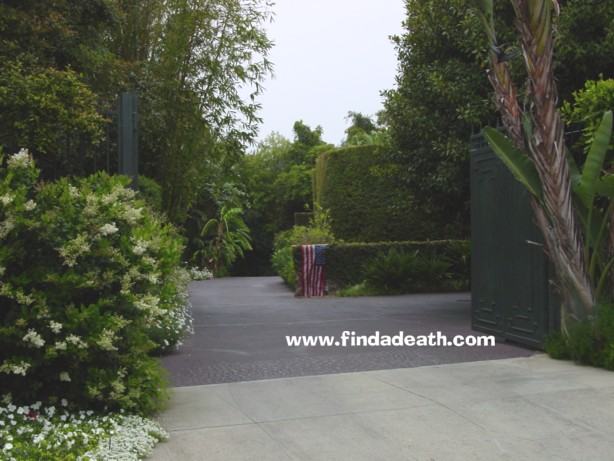 Johnny Grant and the Hollywood Chamber of Commerce sent an arrangement to his star on the Walk of Fame. 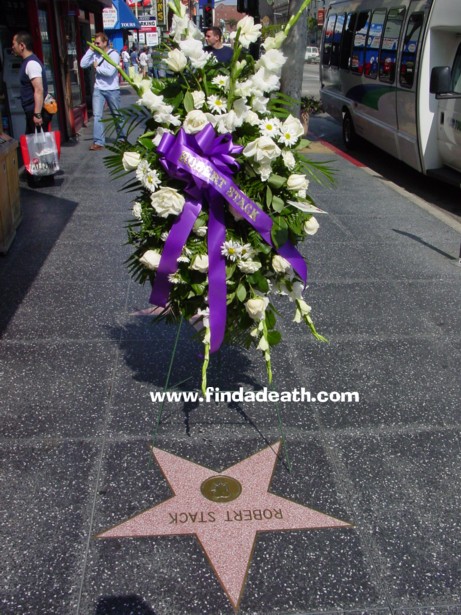 Heart failure. He was 84 years old. He was suffering from prostate cancer, and had a tumor in his heart. Eventually that’s what did him in. 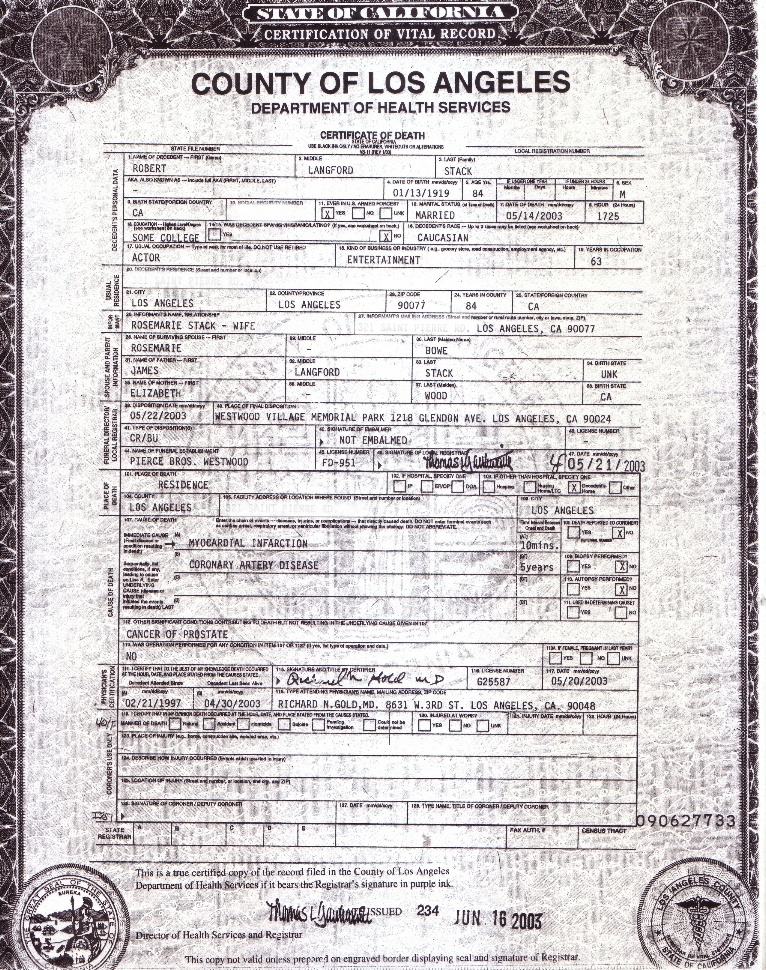 Robert loved his fans, and couldn’t believe it when people wouldn’t take the time to sign autographs for a fan. Not like Joan Van Ark, or that buttface David Spade.

There was a private service at Westwood Memorial Park, where Robert is inurned in the private Room of Prayer. 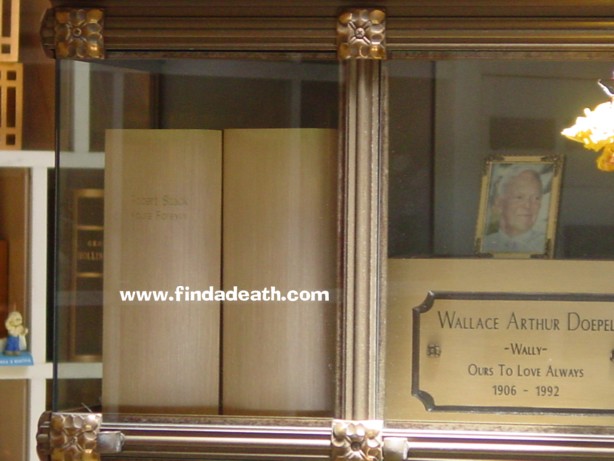 Rest in Peace, Robert.  I thought you were a blast in Airplane. 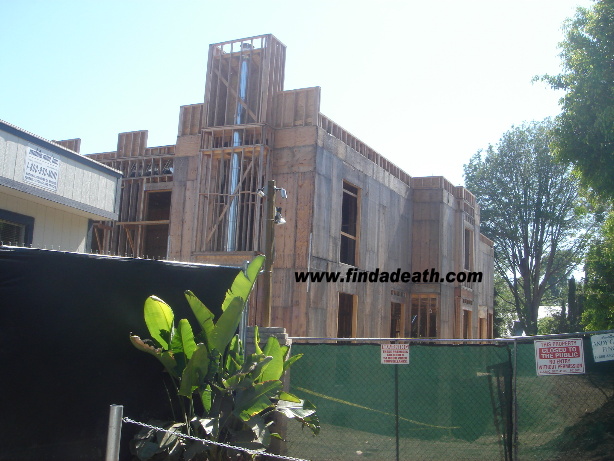 Findadeath.com friend, Shannon from Chicago, sends us this:

Hi Scott, I just had something you might find interesting on Robert Stack, showing what a nice guy he really was. I sent him a letter in February of 2003, asking if I could have an autograph. I promptly received one a week later that said, “To Shannon, all the best, Robert Stack.” Well, of course it had gotten destroyed in the mail, so I wrote him again at the end of April 2003, asking if I could possibly get another because of my situation. I also enclosed a letter with questions on it, that I was hoping he’d answer. On May 14th, I had heard that he had died of heart failure on the radio. The next day, I went to the mailbox and there was my SASE from Mr. Stack. I opened it carefully (I also noted that it was postmarked May 13, 2003) and saw another autographed picture, signed the same way. Furthermore, he had enclosed my letter with the questions on it. Here were the answers:

Would you ever like to do anymore movies? -I’m doing a Broadway play plus Unsolved Mysteries.

How ironic is that last question??? Thanks!