You’re only given a little spark of madness.  You mustn’t lose it.

In my career I’ve learned a lot about people and how they deal with grief.  There’s no judging it.  Grief, like depression, is a personal thing.

Sometimes a celebrity’s death affects people deeply.  Williams is one of those people.

I think a lot of it has to do with a certain age group – a new generation, dealing with this sort of thing for the first time.

People had their JFK, their Diana, their Brad Renfro and their Jonathan Brandis.  There’s no rhyme or reason, it just is.

When he was sinister, he sold it well.  Very well.

As a human being, he was very generous.  He supported the St. Jude organization, and he co-founded the Comic Relief charity.  When his good friend Christopher Reeve had his tragic riding accident and became a quadriplegic, Williams took over his medical expenses when Reeve’s insurance ran out.  He also provided financial support to Reeve’s widow and son.

Williams had his fair share of personal demons.  Alcohol, cocaine, depression.  Money doesn’t buy mental health.  It can help, but sometimes all the rehabs in the world can’t do shit.

According to Williams’ wife, Robin had recently been diagnosed with Parkinsons.

I saw Williams once on Rodeo Drive in Beverly Hills.  He was with his second wife, the babysitter he left his first wife for.  Second wife was walking around with a pissed off look shooting the stink eye at everyone around them.  If you’ve ever been in a relationship with a famous person you might know that look.

I know people that had personal experiences with Williams.  That manic behavior?  By most accounts, he never turned it off.  At least not in front of others.  I don’t know what he was like in an intimate setting.  Talented? Absolutely yes.  Exhausting?  deffo. 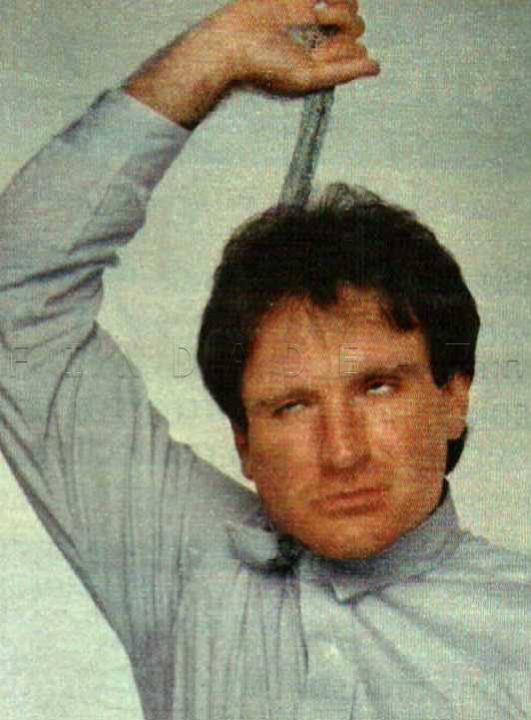 Here’s a paragraph I found about Robin and Carrie Fisher.  She’s very good about mental illness.

Carrie Fisher says Robin Williams opened up to her about bipolar disorder.

The “Star Wars” actress said Williams surprised her one night after a performance of her one-woman show, “Wishful Drinking.”

She said he looked lost and said that he didn’t think he was bipolar. He took the test that she gave the audience and got all the answers right, but didn’t think being bipolar was something that had anything to do with him.

Fisher had known Williams for years and said she was blown away by his charisma. She said he was the opposite of selfish, and anything would hurt him or impact him somehow.

This Google Earth image shows the home that Robin shared with his third wife, Susan Schneider. 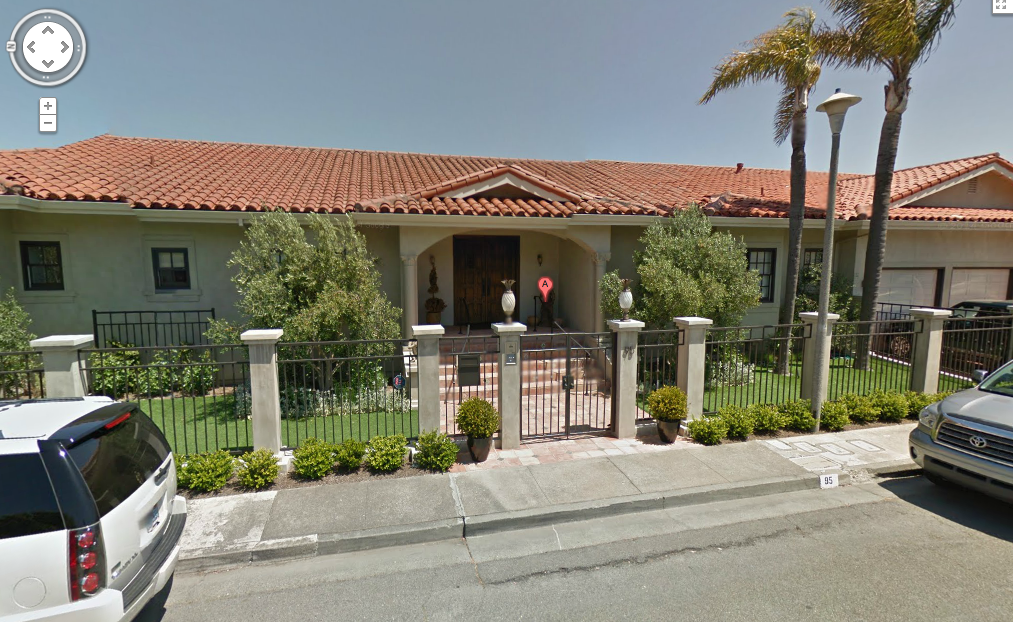 It was in this house that Robin was last seen alive at 10pm on Sunday August 10th.  Sometime during that evening/morning, Robin fastened a belt around his neck and hanged himself.  His assistant discovered his body just before noon on the 11th.

This statement was released. 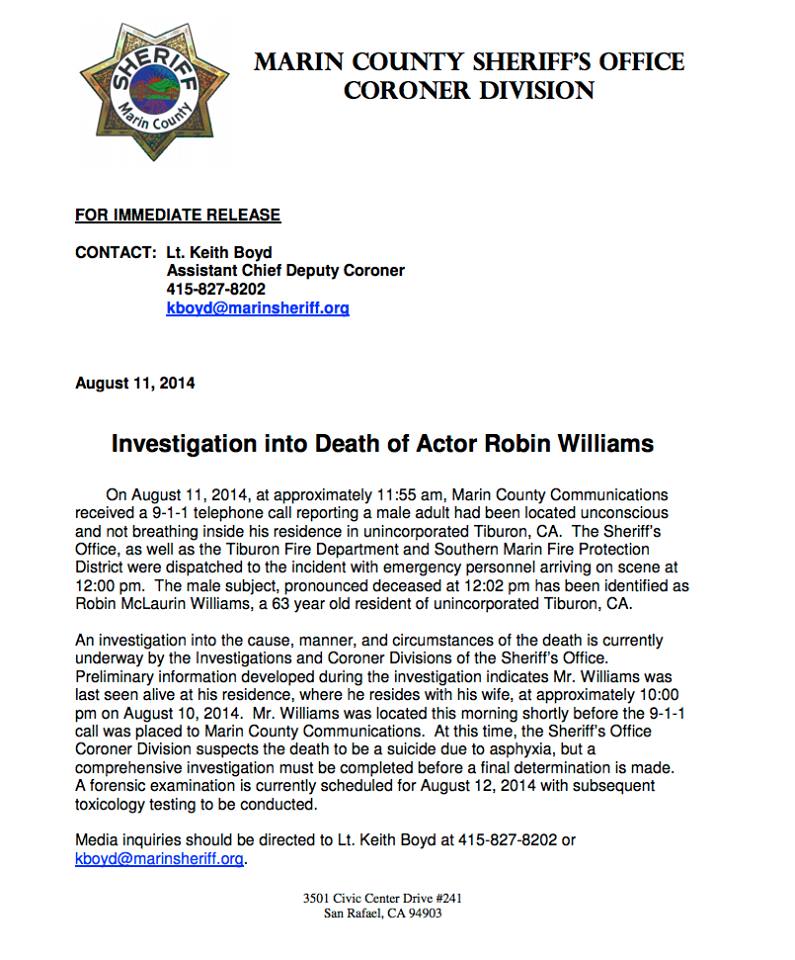 According to one published report:

“Mr. Williams’ personal assistant became concerned at approximately 11:45 am when he failed to respond to knocks on his bedroom door,” said Boyd. “His right shoulder area was touching the door with his body perpendicular to the door and slightly suspended. Mr. Williams at that time was cool to the touch with rigor mortis present in his body,” Boyd added.

Officials also found a pocket knife near Williams and cuts with dried blood on his wrist that matched the knife blade.

Williams had been seeking treatment for depression, Boyd said. He would not discuss if had left a suicide note.

I read an account that Williams was seated when he offed himself.  I asked an expert, the Chief Investigator for the Los Angeles County Coroner, about this particular technique and how it is accomplished.

“When you use a ligature to asphyxiate yourself, you don’t really need to hang suspended as much as you are restricting the flow of oxygenated blood to the brain. We often think of hanging as breaking the neck…that was the intent in days past when someone was suspended from a gallows or infamous hangman’s tree. The mark of a good executioner was the person that could guarantee the neck breaking when the body dropped. Having a person squirm and wiggle as they asphyxiated was bad for business. All you really need to do is fashion a ligature and apply slight tension and you will eventually pass out/die. People tie off on door knobs and just sit down and are successful.” 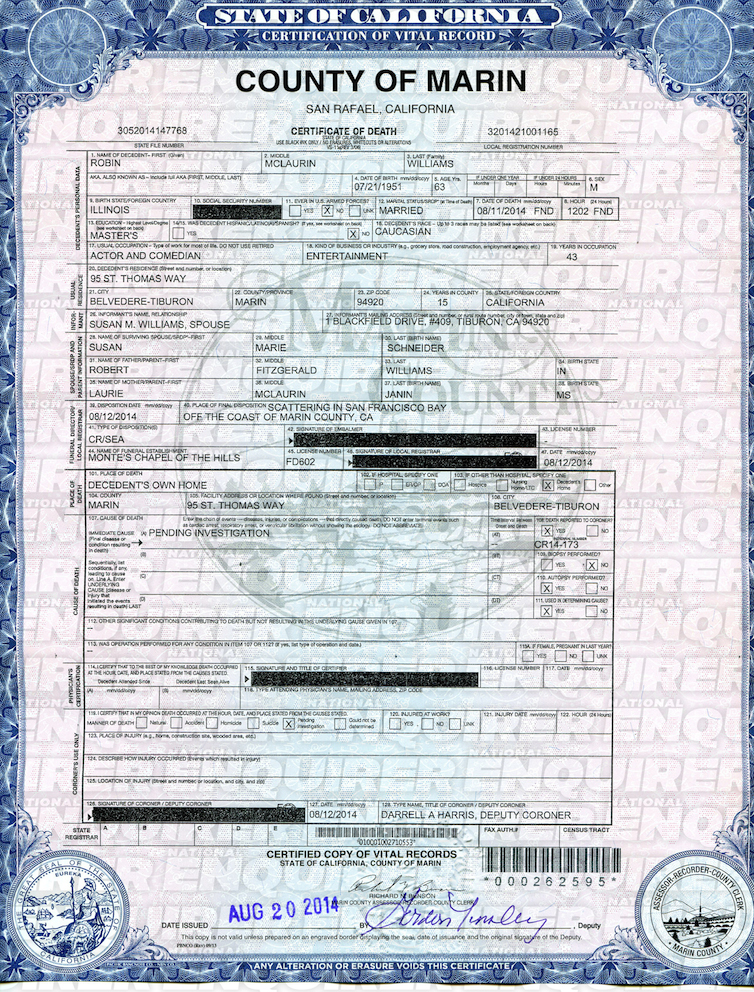 There was a phony Robin Williams morgue shot making the rounds.   It was a convincing hoax.  A real photograph, but not Williams,

Williams body was taken to Napa for autopsy and released the same day.

Autopsy results are pending the results of toxicology.  They keep samples and releas the big stuff for cremation.

His cremains were scattered over the San Francisco Bay. 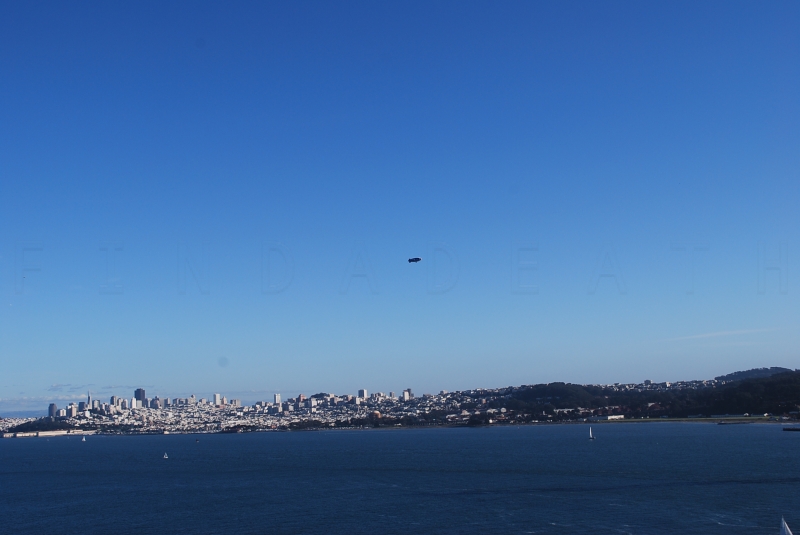 Our friend Brian Donnelly took this photograph of Robin’s star on the Hollywood Walk of Fame. 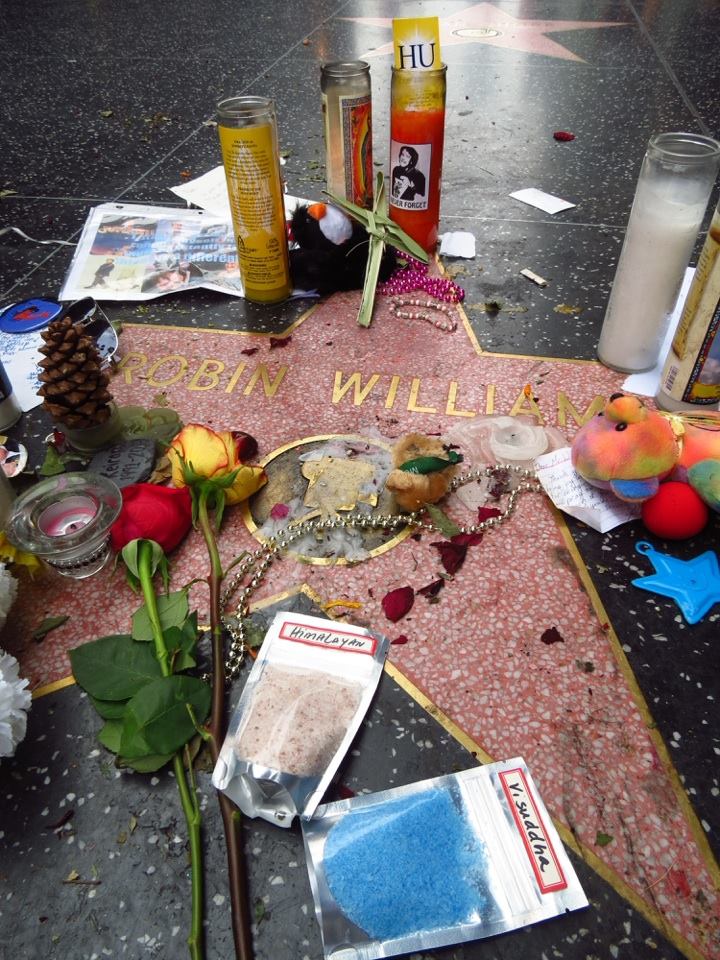 The Mrs. Doubtfire house in San Francisco became a shrine. 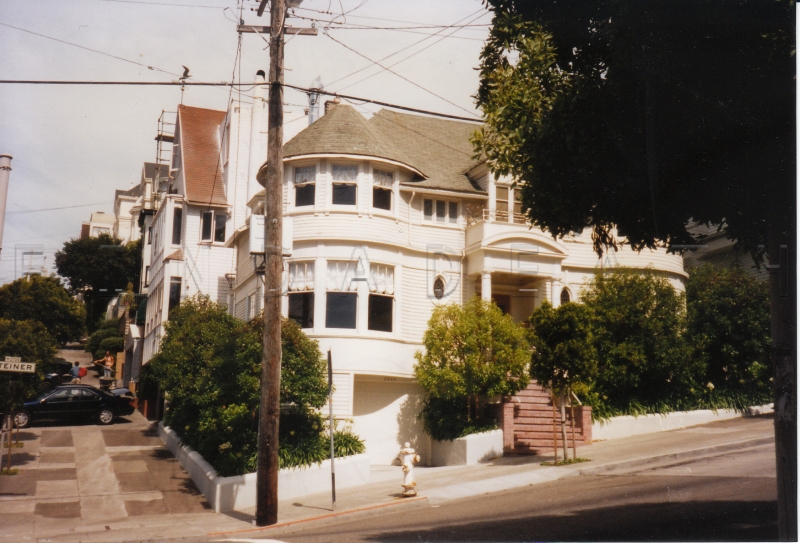 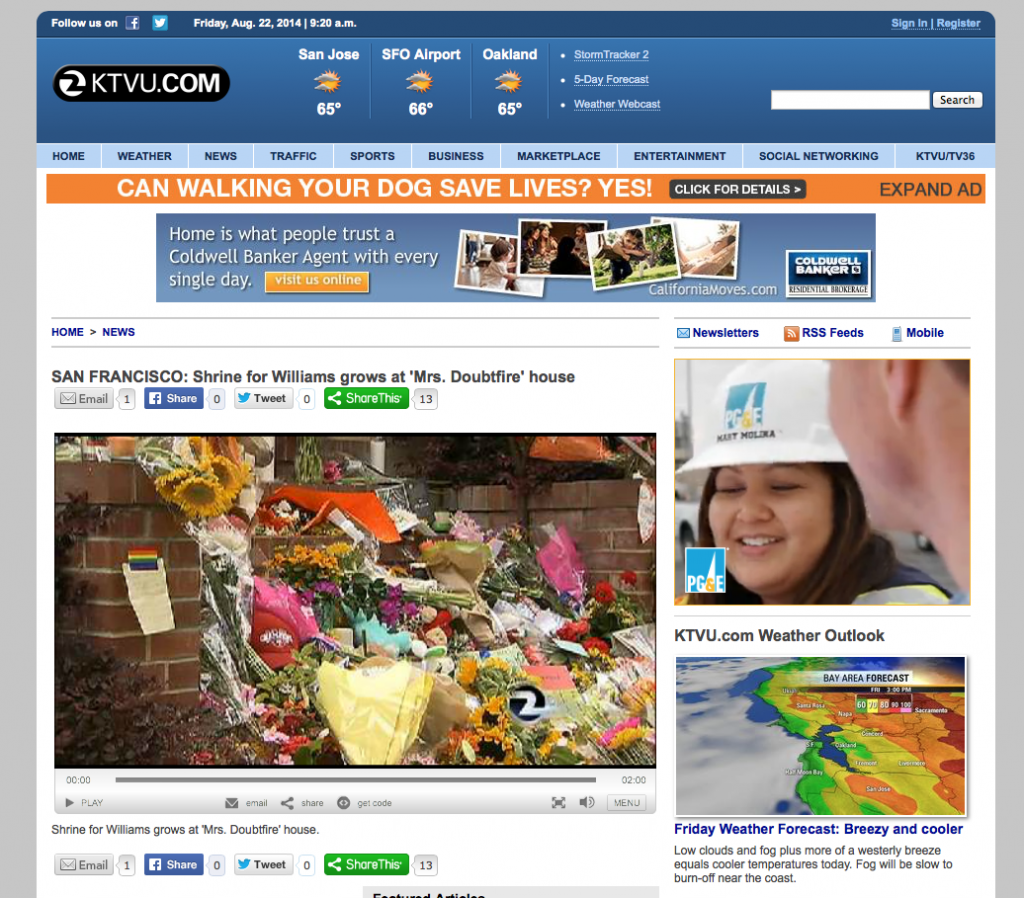 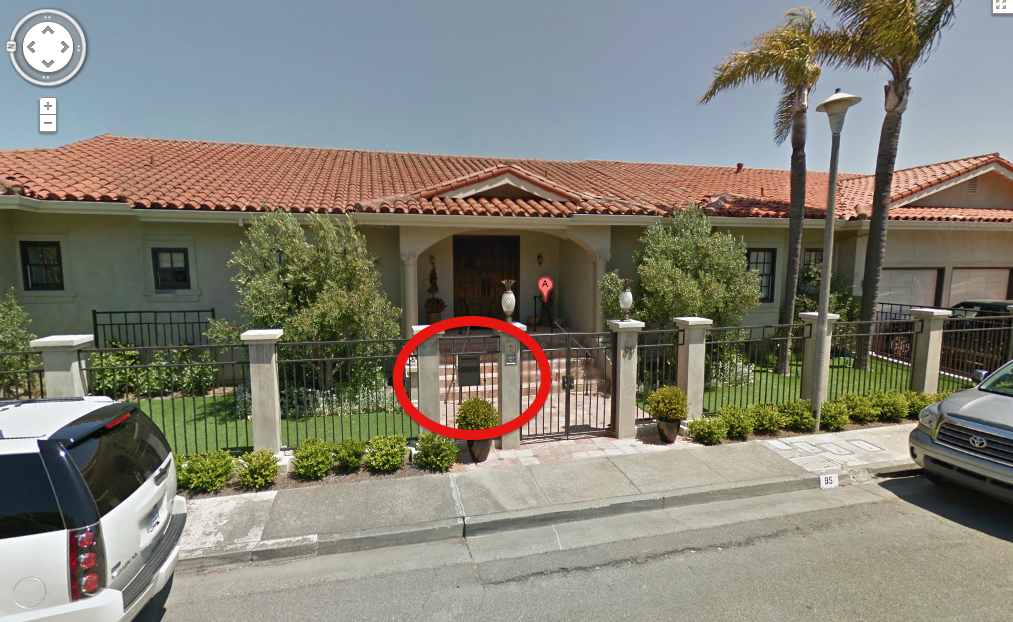