I am Peter Vincent, vampire killer!

Roderick Andrew McDowall knew everybody. His dinner parties were legendary. Someone said that at Roddy’s, you could see PeeWee Herman sitting next to Dorothy LaMour, at other parties you would find Dominick Dunne, Louise Brooks, Robert Wagner, or Lauren Bacall. No doubt Liz managed to worm her way into more than one of those little get-togethers. Liz hates to be called Liz. Roddy couldn’t get rid of her if he tried.

He’s been in a billion different things, but my personal favorites were The Poseidon Adventure and The Night Gallery (the one with the creepy cemetery painting), and Arnold – that great movie with Stella Stevens, when she married the dead guy, and Roddy’s suit shrunk, and crushed him. 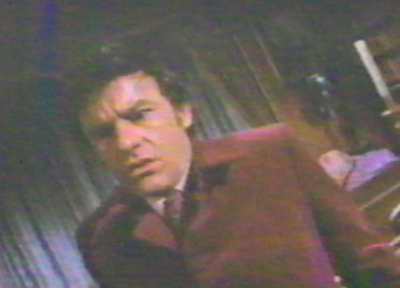 In 1988 he had a successful prostate cancer operation.

He lived in Studio City, on Brookdale Road. 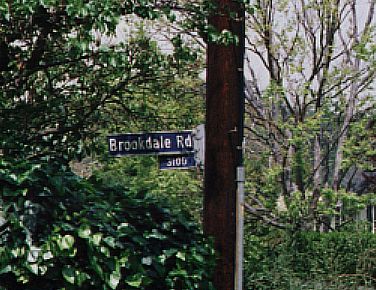 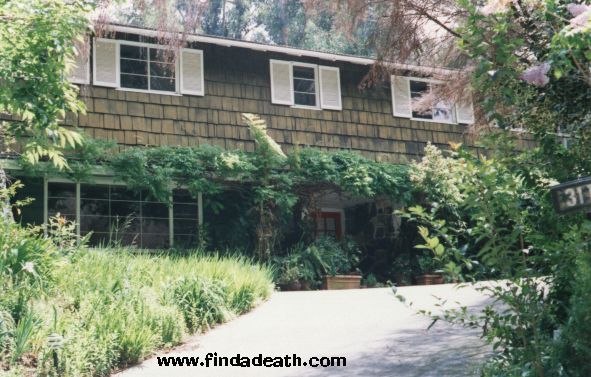 Not very exciting is it? Pretty plain. It’s supposed to have a fantastic garden.

Here’s his mailbox, where no doubt hundreds of thank you notes were delivered. 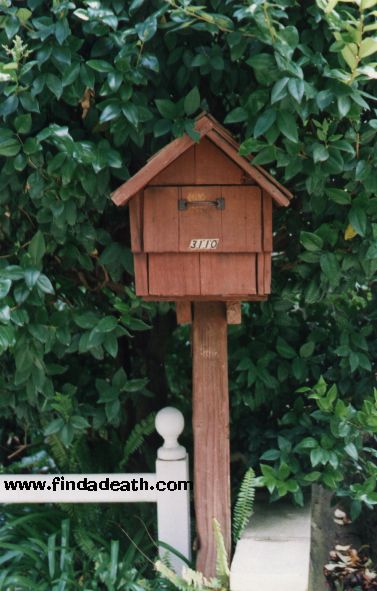 Here are his garbage cans. 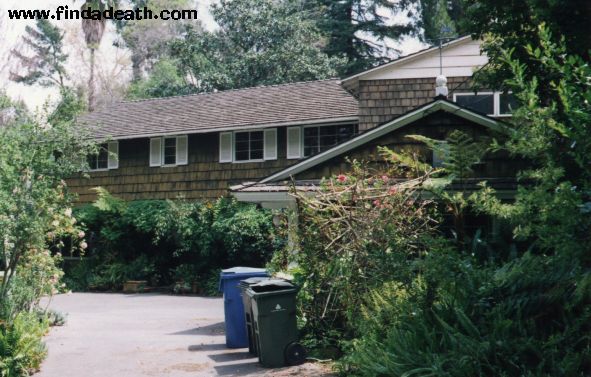 Can you imagine how many 1/2 eaten meals were dumped in these? Many of Liz Taylor’s leftovers entered immortality in those very dumpsters.

A few months before his death, he was having back pains. While admitted into St. Joseph’s Hospital, in Burbank, he was told that he had terminal cancer. 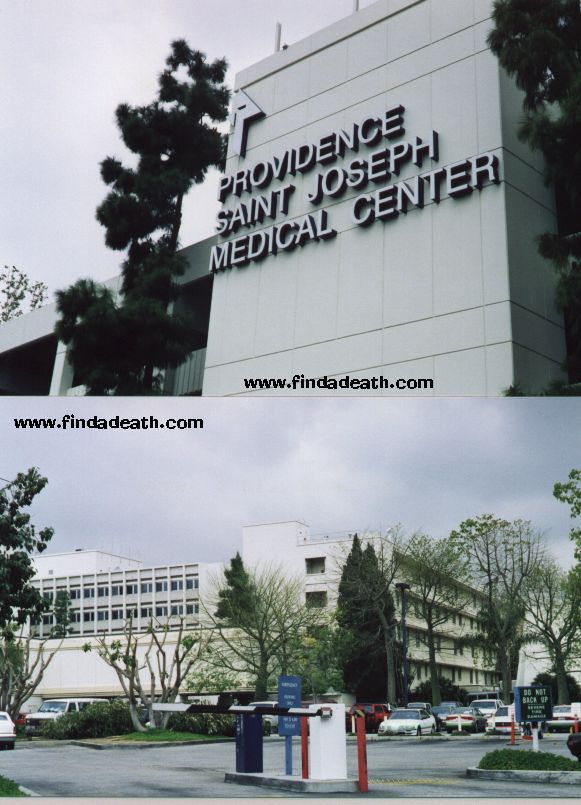 He left the hospital and went home to die. Army Archerd of the Hollywood Reporter broke news of Roddy’s illness on September 21, 1998. McDowell spent his final weeks meeting with old friends one last time, and giving them each a memento. Liz was over all the time, never giving him a moment’s rest.

At the end, he was kept company by Liz and Sybil Burton Christopher, ex wife of Richard Burton, who LIZ stole Burton from. They hadn’t spoken since 1962, but Roddy’s death brought them both together. Personally, I would have told Liz to drop dead, brought in Debbie Reynolds and had a lynching. Roddy was such a nice guy; he didn’t have the nerve to tell them to piss off. On October 1st, 1998, he could stand it no longer. He went into a coma, and on the 3rd, he finally succumbed to the cancer. Liz, mercifully, was not there. Drama queen.

Roddy was 70 years old, and supposedly had cancer in every organ of his body, including his brain. Poor guy. Rest in peace. 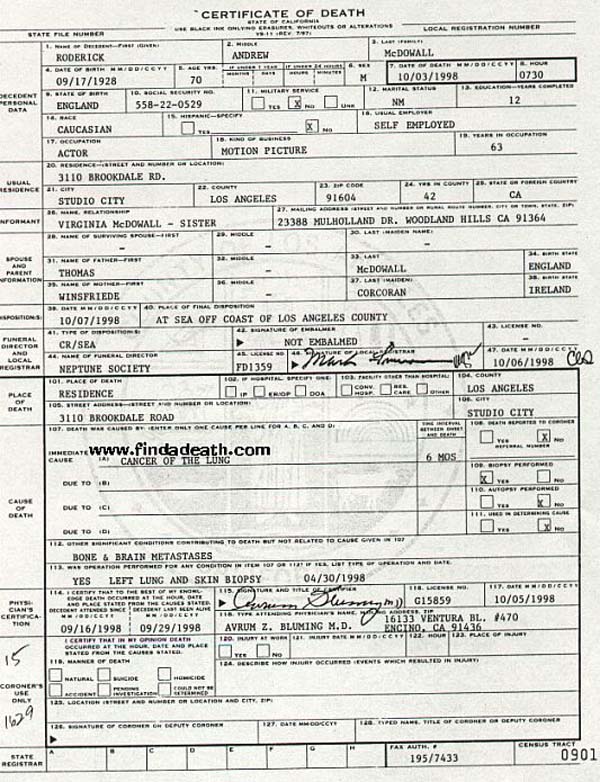 Upon the news of his death, the Hollywood Chamber of Commerce put flowers on Roddy’s star.

From what I can gather, Roddy left strict instructions that his body be cremated immediately, and scattered at sea. By noon that day, the deed was done. “No funeral or memorial service,” were Roddy’s express wishes. Liz, who care’s so much for her dead friends, threw one herself at her house in Bel Air. 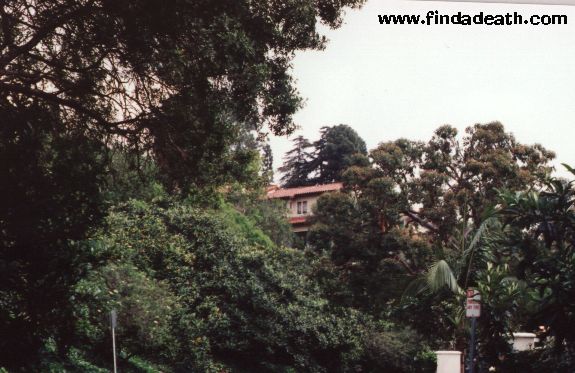 Legend has it that Roddy kept a very dishy diary, and left instructions in his will that it be kept sealed until 2100 AD. Now I don’t know about you, but I think that stinks. What a gyp. I hate that. Why tell us at all? They said the same thing about Jackie O. We should be able to sue, to see it.

Trivia: There’s probably a ton of trivia about Mr. Roddy, but my favorite bit is this nude picture.  It’s   A NAKED MAN!  BE WARNED!  Do not get offended, if you click here.

More:  I just read Eddie Fisher’s book.  Whatever you think about the guy, he didn’t hold back on his opinions, which I respect.  About Roddy, he says, “Roddy McDowall, there was another phony.  HE worshiped Elizabeth (Taylor); when he lived in Bel Air he would come and literally sit at her feet.  I asked him where she was, and he must have been very brave because he told me that everybody was furious because I’d gone to see Sybil (Richard Burton’s wife.  Liz and Dick were just starting to see each other, and she was still married to Eddie.)  “You didn’t act like a man,” he said.  I didn’t act like a man?  I had to hear that from this marshmallow?  From this hanger-on?  I hung up on him.