Nancy
You were my little baby girl,
And I knew all your fears.
Such joy to hold you in my arms
And kiss away your tears.
But now you are gone, there’s only pain
And nothing I can do
And I don’t want to live this life
If I can’t live for you.

Sid Vicious was born Simon John Richie on May 10th 1957 in London. His childhood included his unstable mother, Anne, dragging him off to the Spanish island of Ibiza at the age of three, and trying to survive there doing menial jobs.  Oh, and on the profits she made selling grass she had scored in Morocco. Sid’s dad, John, was supposed to join them on the island, but never did and the marriage broke up.  Simon and his mum returned to the UK where in 1964, Jeanette met and then married an Oxford student named Chris Beverley. Husband number 2 checked out soon of liver failure. Mother and son drifted around a bit, finally ending up back in London.

In Boy George’s book, Take It Like a Man:  “Saturdays, we’d parade the King’s Road in the same clothes we wore to the clubs, full of our own superiority.  We’d walk slowly from Sloane Square to World’s End and hang around outside Malcolm McLaren (producer of the Sex Pistols) and Vivienne Westwood’s shop Sex, daring each other to step inside. 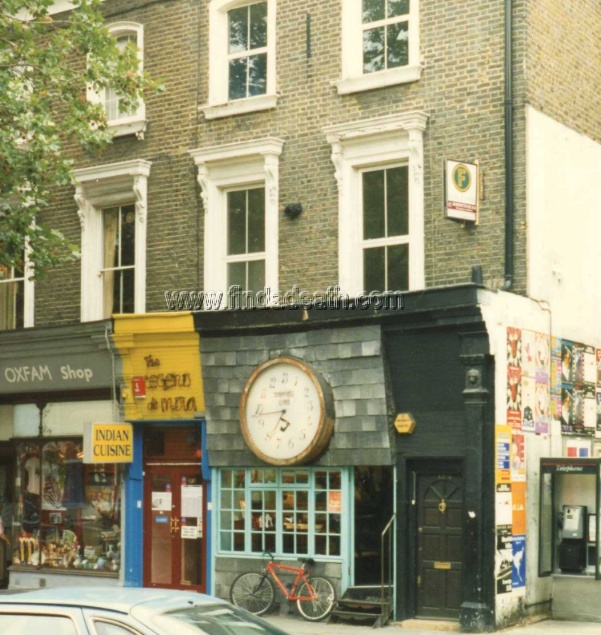 Sid Vicious worked there before he was a Sex Pistol.  He was a sweet boy in those days, goofy in Hawaiian shirts and fifties pegs.”

Boy George also talks of stealing clothes after hours, with a wire hanger through the letterbox.  Heh.

It was in London, whilst studying art at Hackney College of Further Education, that Simon befriended future Judge Judy star John Lydon. It was Lydon (who became infamous under the name Johnny Rotten) that named Simon “Sid Vicious”. In the words of Mr. Lydon himself “I called him Sid after my pet, the softest furriest, weediest thing on earth, this soppy white hamster.”

Sid wasn’t in the original Sex Pistols line up and apparently was as jealous of those that were. He attended all their gigs and it was at one of these that Sid supposedly “invented” that now standard dance of Punk: The Pogo. On the firing of Glen Matlock in 1977, Sid became the Pistols’ bass player and threw himself into the role with abandon.

Nancy Spungen was born In Philadelphia in 1958. A disturbed child, in later years was described as, “unbelievably thick-skinned” and one person recalled, “one of the most unlikable people I’ve met.  Everybody could see through her – except Sid.”   She was already a junkie and working as a prostitute in London when she and Sid met at a party in 1977. According to some, it was Nancy that got him hooked on hard drugs. Sid and Nancy became inseparable, but a burden to the rest of the band. Think John Lennon and Yoko Ono.

One report from Monica Porter of The Daily Mail:

As cans, fireworks and animals’ entrails rained down at Randy’s Rodeo in San Antonio, Texas, sheriff’s deputies armed with revolvers and tear gas rushed to get between the group and the enraged crowd.

The riot was sparked when Vicious brought his bass guitar down on the head of Brian Falpin.  The 19-year-old had tried to mount the stage and attack Vicious for spitting at him throughout the performance.

Falpin fell, clutching his head with a scream that pierced thought the groups deafening music, and police carried him outside.

Johnny Rotten gave up halfway through the tour, and returned to the UK.  Nancy came to the USA, to be at Sid’s side.

Sid and Nancy remained in The States.  They had a colorful visit with Nancy’s parents for a few days.  Before they moved on, Nancy announced to her mother “I’m going to die very soon. Before my 21st birthday. I won’t live to be 21. I’m never going to be old. I don’t ever want to be ugly and old. I’m an old lady now anyhow. I’m 80. There’s nothing left. I’ve already lived a whole lifetime. I’m going out. In a blaze of glory.”

The night of August 27th 1978, Sid and Nancy checked into The Chelsea Hotel New York. 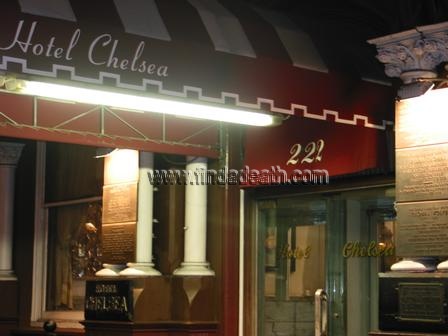 Their room number was 100.  The hotel has since been remodeled, and the room incorporated into the lobby. 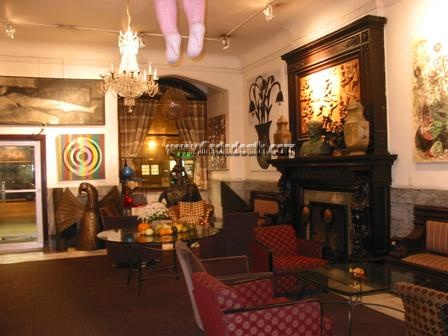 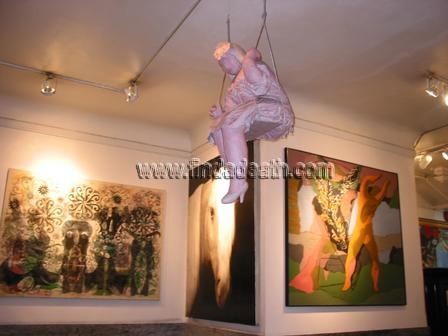 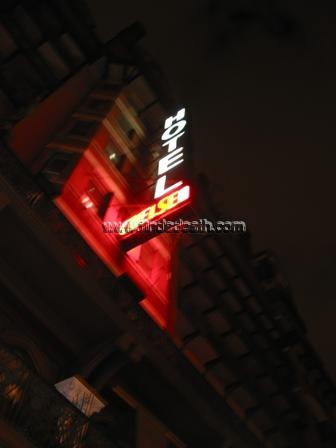 On October 12th 1978, between the hours of 4am and 9am, Nancy Spungen was killed in the bathroom of room 100 by a single stab wound to the stomach (just below the navel).

According to the crime report – Sid stated that around 1am they had an argument, Nancy was sitting on the edge of the bed, flicking the knife and he went to sleep.  He woke up in the morning and the bed was wet with blood.  He thought he had pissed himself.  He found Nancy on the bathroom floor – still breathing.  He left, for the methadone clinic.  Returning, he washed off the knife, and attempted to wash her off as well.  A tidy home is a happy home.  When he couldn’t get her clean, he called for help.

He said he had no recollection of what happened to her.

Later he said she hit him and he hit her on the top of the head and knocked her onto the bed.  “I stabbed her but I didn’t mean to kill her.  I loved her, but she treated me like shit.” 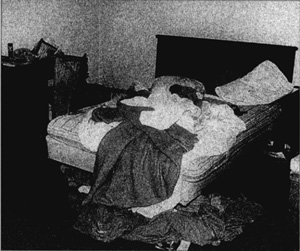 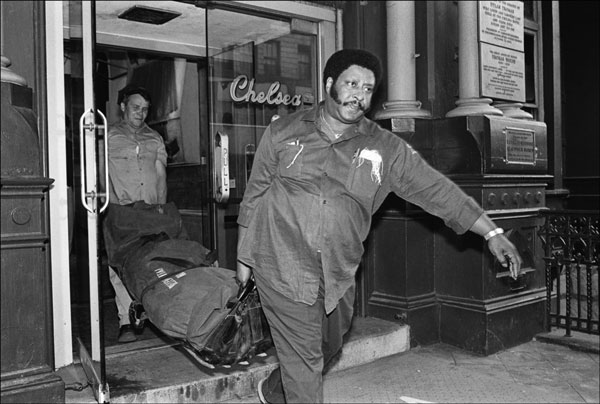 Item of interest: the death room may have been the first floor window facing the street.  These windows do not show up in the lobby. 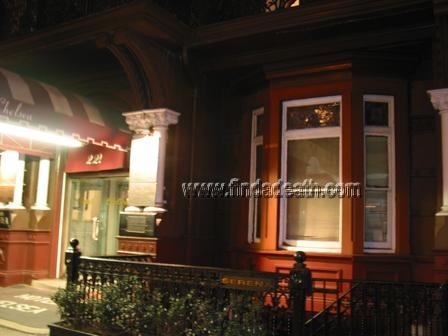 UPDATE: Find a Death friend Fionna Wilson has cracked the Chelsea, and sent this image of the door from Nancy’s death room.  Fionna says:  “Here it is…It’s marked 101 (not 100, as it was then). The cleaner kept staring at me as I hung around taking pictures. Confirmed what I suspected. Sid and Nancy’s place.” 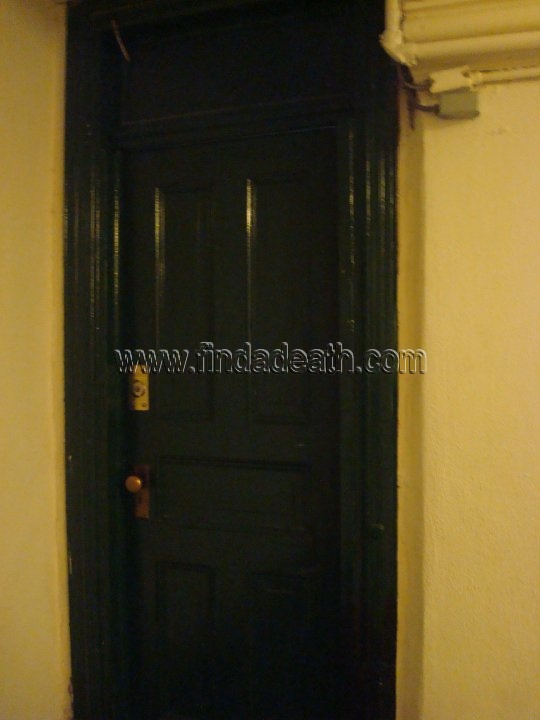 Sid was charged with second degree murder the same day and was taken to Rikers Island. He was back on the streets a week later when some mega-lenient judge saw it fit to grant him $50,000 bail. On his release, Sid and his mother checked into the Seville Hotel and it was here on October 22nd 1978, Sid made his first suicide attempt.

He was rushed to the psychiatric ward of the Bellevue hospital, detoxed and again released by the judge, pending an evaluation.  There was also the condition that he report to the police everyday and attend the methadone clinic.

Back in London – Malcolm McClaren printed up shirts with Sid’s image holding a knife, and the slogan, “She’s Dead, I’m Yours.”

After being released from Rikers a second time (awesome!) where he had been put for fighting with Patti Smith’s brother, Todd, at Hurrah music club (on 62nd and Broadway), he hooked up with an unemployed actress named Michelle Robinson.  She was hot to land that catch.  Oh, Sid’s mom came to New York as well, to help out with Sid’s legal issues… and wreak havoc.

Celebrating Sid’s release, they held a party in Michelle’s flat.  Sid wore an I Love New York t-shirt and jeans.  He ate spaghetti Bolognese.  Around midnight he shot up heroin.  He had been clean for a week, and it hit him hard.  He collapsed and his lips and face were blue.  They wrapped a blanket around him, and he came around.  Mum said, “you gave us a fright!”  Sid got up to puke, but ended up not being able to.

Having recovered, he conversed with Michelle and his Mum for roughly two hours, and retired to bed.  Mum slept on the sofa.  Michelle and the love of her life, were in bed.  He had no more drugs, and no alcohol.

Mum woke around 8 a.m. to make herself a cuppa.  She peeked in and saw Sid and Michelle sleeping, and heard Sid cough, and went back to snoozing.  She woke again at noon and entered the bedroom to kiss Sid on the forehead.  He was dead.  In his sleep, nude, face up, in apartment 1A or 1B of this building. 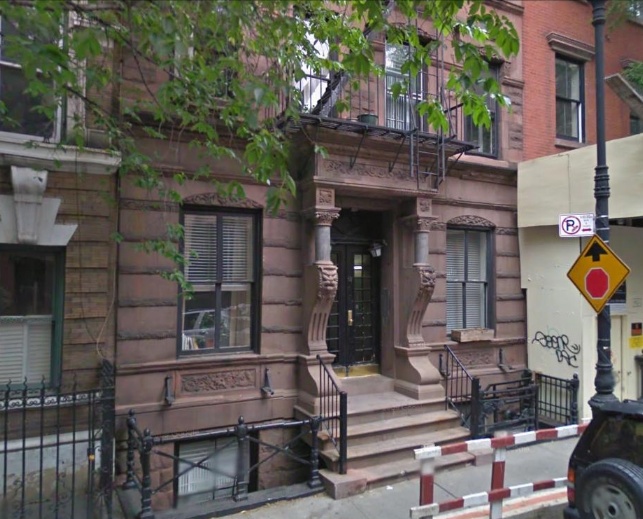 There is a common report that Sid’s mum “ordered in” the heroin herself, like a good mum would, to save Sid from having to score it on his own.  However, according to the police report, the heroin was obtained by “a friend.”

There is another report that Sid asked Michelle to shoot him up with heroin, as he had the shakes.  She left the room, told Mrs. Vicious – who then entered the room and shot him up.  Thanks MUM!

In her own words:
Simon had a rose pink aura around his whole body. I said , ‘Jesus, son that must have been a good hit.’ He was elated, quietly so. Elated on the inside, coming out, creating the aura.” 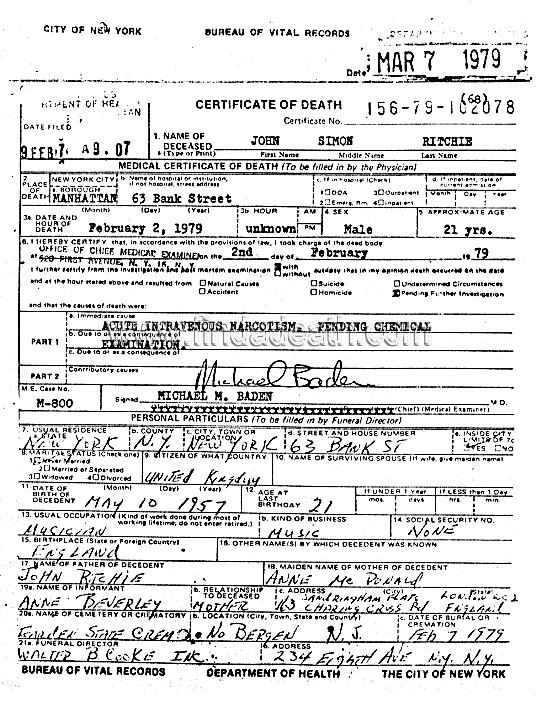 Sid had a suicide note his pocket. 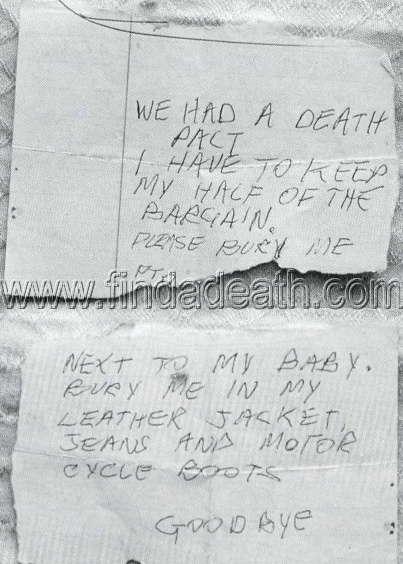 Mum wasn’t able to comply 100% with Sid’s wishes, his having been already incinerated. The Spungen family said HELL to the NO, and refused to tell her where Nancy was buried.  According to legend, she found out anyway.  She waited till dark, then scrambled over the wall of the cemetery and dumped Sid on top of Nancy’s grave.

Trivia:  Sid liked Chinese food because it made a pretty pattern when he was sick.

It’s nice to see that the Chelsea Hotel doesn’t shy away from the fact that Nancy died there.  Unfortunately, they do state that writer Dylan Thomas died there as well.  Not true.  He died in St.Vincent’s Hospital – November 9, 1953.

Don’t know if this is true, but here’s a great story:  On 2 February 1980, in honor of the first anniversary of Sid’s death, one thousand punks marched from London’s Sloane Square in Chelsea to Hyde Park. His mother was supposed to have taken part in the proceedings, but she was in the hospital due to a drug overdose.

Thank you to Findadeath friend “David”, Amy Watkins, Natalie for the autopsy, gratitude to “Jody” for NYC Photographs, Jayne and Janet.

I do not condone murder, however, if Nancy Spungen was half as annoying as Chloe Webb portrayed her to be in the movie  Sid and Nancy…