I live for myself and I answer to nobody.

McQueen was one of the original “action” stars – some people even think he defined the word “cool.” (the McQueen of Cool?) Movies like Bullitt and The Great Escape cemented his status in Hollywood in the Fifties and Sixties, and would continue into the Seventies with films such as The Towering Inferno (with O.J.), and Hunter, his final film. As always, there is plenty of information on Steverino elsewhere.

In 1979, he had been diagnosed with mesothelioma, which is an asbestos-related cancer. A lot of people think he got it due to his driving race cars, others think he got it in the Marines. It apparently spreads quickly.  Steve was living in this house, in Brentwood. 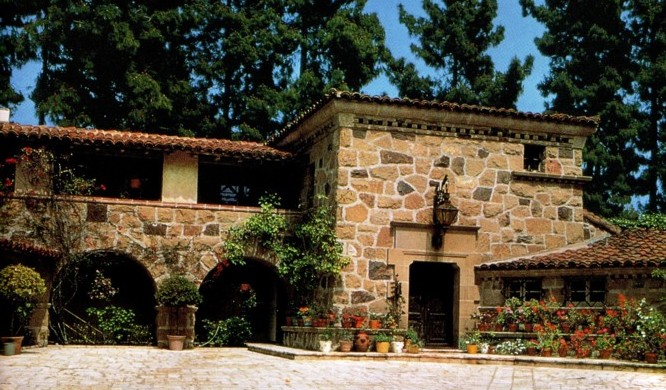 Sometime in 1980, he went to Juarez, Mexico, to undergo an apricot treatment, which was banned in the U.S. In November of 1980, he underwent surgery to remove cancerous tumors in his stomach. Twenty-four hours after, at 3:45 A.M. on November 7, he died of two heart attacks. He was fifty years old. 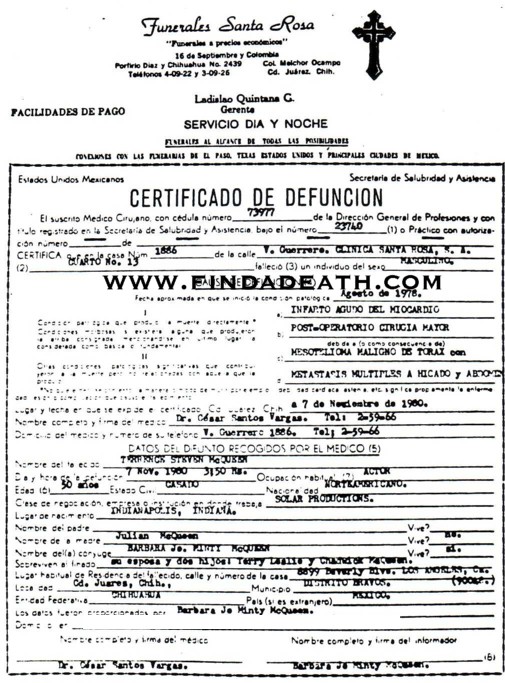 I don’t have any funeral info, but he was cremated, and scattered in the Pacific Ocean.

Find a Death friends John and Andrea (who were just engaged! Congrats you two!) actually went to Mexico and did the legwork for this bit, and we’re eternally grateful:

It was a our pleasure—on a funny note, Andrea and I were in Los Angeles about 2 or so weeks ago getting engaged, you can thank yourself, Steve McQueen and Find a Death for bringing us closer (lol).  Thanks so much for posting the article.  We send all our best to you and your loved ones this holiday season…

Andrea and I made the trek out to Juarez Mexico and found the hospital pretty much the way it was when Steve was there.

The neighborhood looked rather shady, I may be out of line of calling it a war zone but I can tell you that it was bordering on Third World quality. 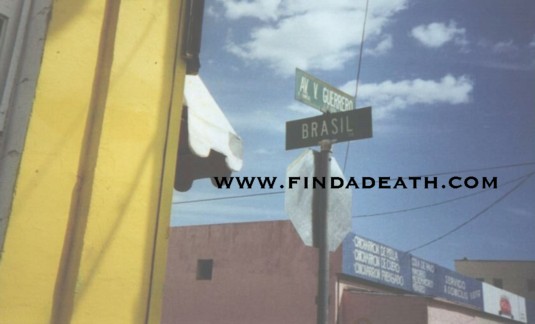 The head nurse was rather hospitable (HRR) though adamant about us not taking pictures of Steve’s wing, since it really looked run down and did not reflect on how nice the remodeled hospital was.

Never the less, she gave us the grand tour.

We deliberately posed as college students writing a paper on the actor…not too much of a fib but HEY!  I really wanted the pictures! I scanned the room for a rumored Steve McQueen memorial but none was to be found. An orderly said that if they did have a memorial set up, it was most likely taken down due to the recent renovation.  The hospital has been mostly remodeled since 1980, BUT… the wing where Steve was is still as it was back then, though now it is water damaged (big puddles), abandoned rundown wing used for outdated medical junk and storage. 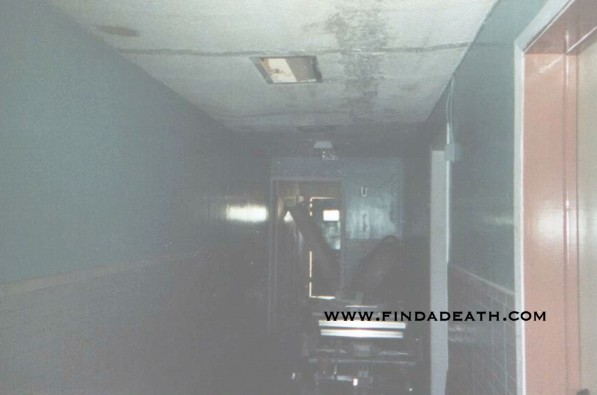 The hospital wing in question, which was located on Southside of the building, looked like it has not been used in well over 10-15 years. There was a musky old adobe type smell that lingered throughout the still air. There was no power, to say nothing about artificial light. The only light source in the place was the small amount of sunlight that would trickle through holes in the roof or through the windows that were caked with dirt. There was an open door in the distance which led to what I believe was a small paved yard. The hallway had sheer darkness in every corner and gave off an “old abandoned mental ward” style vibe. 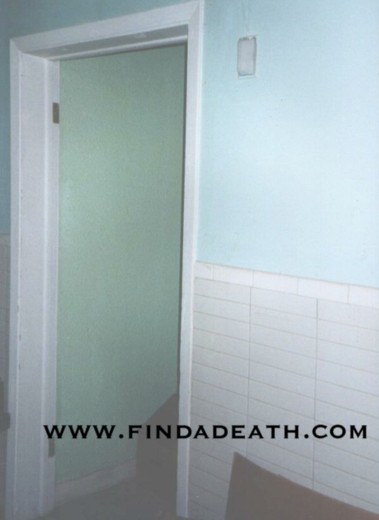 The dominating resident in these parts is DUST. The dust was so thick it would rise from the bottom of our shoes with every step. Steve’s room is really a suite of sorts, it had a little receiving area adjacent to the actual bedroom which had a nice little view of an outside atrium/garden.

The walls were painted with a heavy 70’s style aqua paint….you could almost taste the lead. As mentioned, this particular room housed lots of old hospital junk, including an “old-school” baby incubator. 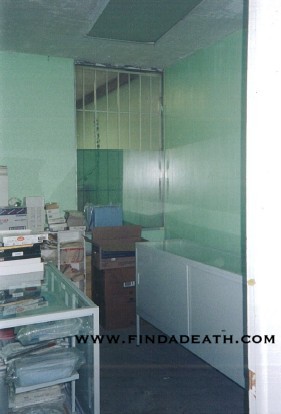 Steve’ bathroom/shower was stuffed with an array of files and light fixtures so I really could not take a photo of it. The room as a whole did give off a somewhat serene vibe…quiet and free from distraction. One can tell that privacy was important since the only window in the place overlooked an enclosed atrium style garden.  Dr. Santos, (the surgeon attending to Steve) sadly was not available on this trip, though his nurse says he reminisces about Steve frequently to his staff and patients. 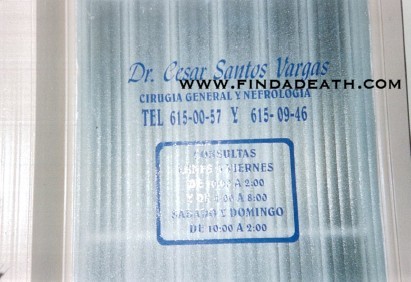 The nurse mentioned small tidbits about Steve throughout my visit. My Spanish is not up to snuff so I struggled a bit with her answers. The Mexican professional community frowns upon Spanglish just as they do in El Paso. I am not sure how true the following information is but you have to admit it is quite interesting.

1. Steve was given about 1 month to live, yet survived upwards of 5-6 months due to the controversial Laetrile treatment he was undergoing. Some say that his health was deteriorating more rapidly due to the treatment so this information is conflicting.

2. Dr. Santos who attended Steve was supposedly flown to the White House to visit with President Reagan, not sure if it was for a medical reason.  Rumor has it; Steve was very close to the Reagan’s and had connections with Billy Graham due to him becoming a born-again Christian shortly before his death.

3. According to the nurse, Steve was a model patient who had high hopes of recovery, yet was poised to face the inevitable. His newfound faith “rubbed off” on everyone around.

4. The nurse also mentioned that they did remove a 5-pound tumor from his torso and/or abdomen shortly before his death. Yum.

5. There are conflicting reports that he might have passed alone and in his sleep since, from what the nurse gathered, he would spend most of the day fast asleep–towards the end.

6. Since he was a big star, the staff did more than their part to make sure he was not mistreated or hassled by any press or fans, often closing that wing of the hospital to the general public.

7. The Santa Rosas hospital, somewhat popular and well known, is really more of a clinic. It has been around since the 1930’s and only recently renovated. It has a reputation of being a good hospital mostly in part due to the wonder of it’s resident physician: Dr. Santos.

In the end, I can honestly say that Steve’s memory is alive and well in this community. Most speak of him with high regards and a certain amount of reverence. The Santa Rosa’s clinic on a whole is a very well maintained institution, fully capable and very clean. Steve’s part of the hospital in no way reflects the functioning part of the hospital. The staff was very accommodating and did not accept one ounce of compensation for their trouble aside from our thanks. Dr. Santos is regarded as a treasure amongst the surrounding community and his peers. It is because of him, that I feel Steve lasted longer than expected. I remember asking myself: Why would a world-famous actor go through such a controversial treatment? The answer I feel was in one of Steve’s quotes: “When I believe in something, I fight like hell for it.”

Find a Death friend cyberbeg sends us this:   I was looking up Steve McQueen and I found this information about his doctor William D. Kelley which states:

Kelley’s most highly publicized encounter with the medical establishment began in 1980, when he agreed to treat actor Steve McQueen, suffering from advanced mesothelioma, a rare, nearly always fatal form of lung cancer. McQueen’s malignancy was too extensive for surgery, and his terminal condition was completely hopeless. Nevertheless, on Kelley’s advice, McQueen entered a small Mexican hospital where doctors claimed to use the Kelley program. McQueen never followed the full Kelley protocol; he smoked and smuggled junk food into his room. Even so, after eight weeks on a partial Kelley regimen, his tumor had stopped growing, he no longer felt a need for painkillers, and he had put on weight. His doctors expressed some cause for optimism. However, McQueen eventually discontinued the program. He died in November 1980, just hours after undergoing surgery to remove an apparently dead tumor mass in his abdomen.

The ensuing publicity triggered a media assault on Kelley organized by the American medical community. Spokesmen for the ACS, NCI, and leading medical schools condemned Kelley and his methods vociferously, without ever bothering to examine the details of McQueen’s treatment.

Steve was friends with Sharon Tate and Roman Polanski, and – fearing for his own life – blew off Sharon’s funeral. Roman never forgave him for that.

McQueen held the patent for a bucket seat 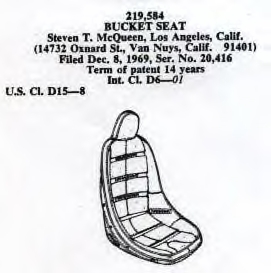 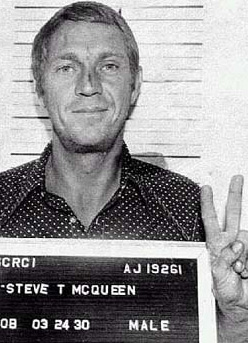 His footprints are upside down at the Chinese theater, just a few paces from the only other upside down footprints, that skank Ali McGraw the real king of cool (and letch) Robert Evans. 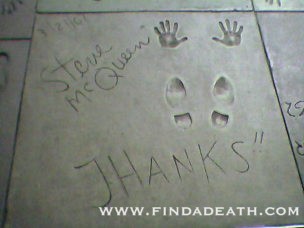 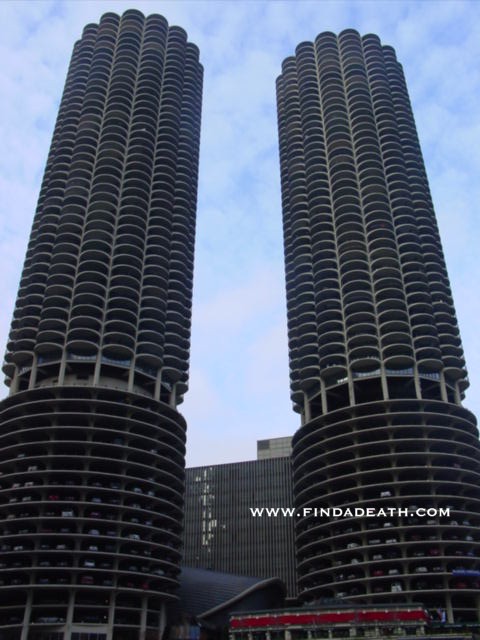 along the Chicago River (that they have to dye orange for it to turn green on St. Patricks Day. ew.) 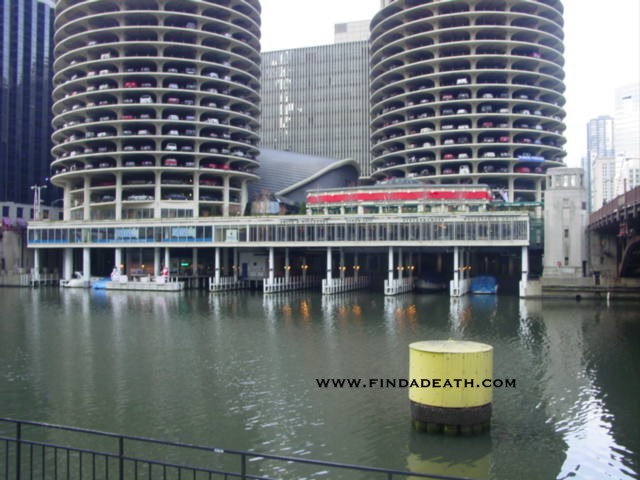 Trivia: He was good friends with Bruce Lee, and served as a pallbearer at his funeral.

Here is one of his car thingys at the Peterson Museum. 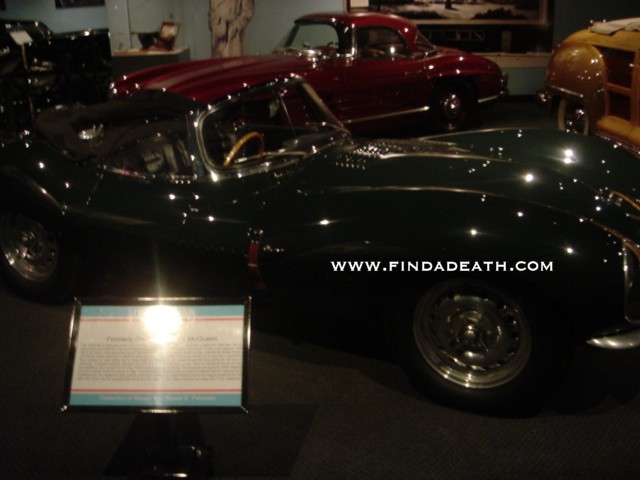 This is the legendary car chase scene from Bullitt.

More:  (WARNING!) Don’t follow this link if you don’t wanna see his willy.

Thanks as per, Kevin Hassell and my (very patient) pals, John and Andrea, and Harry.  You guys are tops. x