I know you’ve must’ve had someone in your life that made you feel REAL.

Filmmaker and author John Waters recalled androgynous, falsetto-voiced disco legend SYLVESTER as “a gay, black diva who never really fit into any minority but managed to achieve his dreams of stardom. Now that’s what I call a man.”

Sylvester James began his fabulous journey as an artist singing in the Pentecostal Church of his youth in Los Angeles. Born in 1947, young Sylvester was an effeminate kid with a strong voice who sang in church choir and at regional gospel conventions. During these years from age 7 to 10, he was also having sex with an adult male evangelist. When the secret was revealed, Sylvester was ostracized along with the sexual predator. As an adult, Sylvester didn’t discuss the emotional pain of his community’s ridicule, but made a point to describe the sex as consensual, saying “I was a queen even back then, so it didn’t bother me. I rather liked it.”

By age 15, Sylvester had left the church and was running around the Sunset Strip with a pack of teenage gay boys that shared his love for glamour, make-up and being fashion flexible. They called their group: The Disquotays and got into 1960s mischief in the era when dressing in public drag was a criminal offense. Luckily young Sylvester avoided the police – except for the time he was caught shoplifting a bra and girdle. His home life with his mother and new stepfather became strained and he spent years living with his grandmother Julia Morgan. Sylvester idolized her (she had been a 1930s blues singer) and she accepted her grandson’s homosexuality.

In 1969, the frequently truant Sylvester graduated from Jordan Highschool at age 21. San Francisco was calling and it became his home for the rest of his life. There he reportedly worked as a hairstylist and window dresser, took psychedelic drugs, and became the house chanteuse at Chinatown’s Rickshaw Lounge. He dressed in drag and sang blues & jazz tunes under the name Ruby Blue and became the talk of the town.

“My life started when I moved to San Francisco.”

In 1970, the LSD-soaked gender-bender cabaret troupe the Cockettes asked Sylvester to join them. Sylvester performed in their revue “Hollywood Babylon” and gave himself the star spot singing “Big City Blues.” While the Cockettes act was campy free-form staged chaos, Sylvester’s approach was authentic “Harlem Theater” blues mama in the tradition of Billie Holiday, Josephine Baker and his grandmother. He became their star attraction and they were invited to perform off-Broadway at the Anderson Theater in the East Village in November 1971. NY critics and audiences were not impressed with the Cockettes’ unrehearsed buffoonery but did recognize Sylvester’s talent. Sylvester soon left the back-end of the act behind to go solo – and the Cockettes disbanded.

In February 1976, after his first two LPs brought little buzz, Sylvester hired two plus-sized backup vocalists named Martha Wash and Izadora Rhodes. The ladies went by the name ” Two Tons of Fun” (and would later have their own smash hit: It’s Raining Men as The Weather Girls). Sylvester & the ladies had their first taste of success with the song “Over and Over” which became a big hit in England. They honed their sound at Bay-area dance clubs where Sylvester met lighting technician and synthesizer expert Patrick Cowley. Cowley added synth overlays to two of Sylvester’s next album cuts which became massive hits. “You Make Me Feel (Mighty Real)” and “Dance (Disco Heat)” went Gold and made Sylvester a star. He appeared on American Bandstand, The Merv Griffin Show and in GQ magazine, toured the world – and got a small part as a Diana Ross female impersonator in the film The Rose starring Bette Midler.

Sylvester had a weakness for jewelry and white men. When the disco hits turned into cash – Sylvester improved his looks with cosmetic surgery and dental work. His travels always led him home to San Francisco where he was adored. Sylvester appeared alongside Harvey Milk at the Castro Street Fair and was a huge part of the early Gay Liberation (out & proud) movement.

In 1979, Sylvester was given the key to the city by SF Mayor Dianne Feinstein. He performed on March 11th (“Sylvester Day”) for a packed house at San Francisco’s War Memorial Opera House backed by the ‘Tons’, his band and 20 symphony orchestra musicians. The stage was filled with gladiolas and backed by a sign reading “Flowers While You Live.” Before he took the stage Sylvester celebrated his live recording by downing a hit of Acid with champagne with a Quaalude chaser to take the edge off. The Live Concert LP was called “Living Proof” and it showed that he could sing not only his Gospel-infused dance hits but the bluesy ballads that he loved as well. That year Sylvester also performed on the mainstage of SF’s Gay Freedom Day parade and had another dance hit with “Can’t Stop Dancing”.

By 1982, Sylvester was signed to the record label created by his friend and collaborator Patrick Cowley. He wrote Sylvester’s next big club hit: “Do Ya Wanna Funk”. The writer-producer returned early from Sylvester’s world tour because he wasn’t feeling well. Doctors guessed at food poisoning – but his condition worsened. Nobody knew that the 32-year-old Cowley was dying from AIDS – a disease that was still unnamed but would come to decimate an entire generation of gay men. Sylvester became an active volunteer at the local AIDS hospital ward and performed at the earliest benefits.

Though the disco-era had faded fast, Sylvester continued to tour. His later dance chart hits included “All I Need”, “Band of Gold”, “Too Late” , “Take Me to Heaven”, “Living for the City” and “Someone Like You”. He also got to live out a teenage dream by singing background vocals on Aretha Franklin’s record “Freeway of Love”.

In December 1986, Sylvester appeared on The Late Show Starring Joan Rivers. Comfortable in his own skin, he laughed and sang and matter-of-factly discussed his marriage to partner Rick and showed off a wedding ring in front of America. He corrected Rivers when she described him as a “drag queen” – he said, “I’m not a drag queen – I’m Sylvester.”

Sylvester’s final partner of 3 years was the 6-foot-two blonde-haired / blue-eyed architect Rick Cranmer whom he had met at a gig in 1984. The pair made their home in the SF hills. Rick was diagnosed with AIDS in 1987.

A message board poster named Jonathan Levy shared a memory on discomusic.com about Sylvester. He wrote: My most special memory of him was when he was at SF General visiting his lover who was dying at the time and he stopped in to chat with MY lover who was also there dying at the time. He was so charming to my lover who he had never met, in spite of his own personal pain.

The night after his lover’s death, Sylvester performed at the Gay Softball World Series Party and dedicated a song to Rick called “You Are My Friend”.

Sylvester learned that he too had the disease and tried the anti-viral drug AZT but the side effects made him sick and he stopped taking it. At the time nobody could imagine that just 8 years later, more effective combination drug “cocktails” would be introduced (containing less dosage of AZT or removing it completely) and be able to suppress the HIV virus and keep people alive for decades. Sylvester went public about his condition, attending SF Gay Pride events in a wheelchair and speaking with the media.

Three months before his death, Sylvester told the LA Times, “Down the line, I hope I won’t be in a lot more pain. But I don’t dwell on that. I’ll be fine, because my spirit is fine.” He added, “I’d like to think that by going public myself with this, I can give other people courage to face it.”

During the Castro Street Fair of October 1988, the crowd was told to chant Sylvester’s name so he could hear their tribute while he lay in bed 2 blocks away at his Collingwood Street apartment. His weight dropped from 200 to 140 pounds and a minor stroke left him with some loss of speech.

For Thanksgiving 1988, his family gathered by his bed-side where he was on morphine and planning his own funeral – where he asked to be buried in a red kimono.

Sylvester died at age 41 of complications from AIDS on Friday, December 16, 1988 in Oakland CA. His memorial was held at the Love Center Church in East Oakland and he was buried in his family’s plot in Inglewood Park Cemetery, Los Angeles. 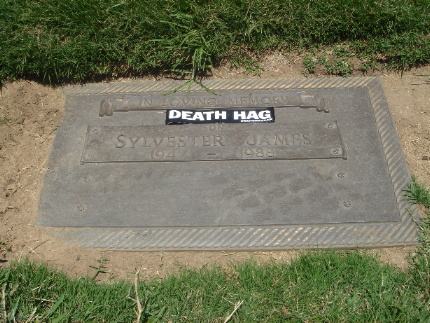 Sylvester was survived by his mother and stepfather Letha and Robert Hurd; sisters Bernadette and Bernadine; and 3 brothers, John, Larry and Alonzo.

Sylvester was remembered with a panel on the AIDS quilt (block 1172) and received an engraved memorial boulder in the National AIDS Memorial Grove in San Francisco’s Golden Gate Park.

As of this writing, 25 years since Sylvester’s death, his music is now profiting two local SF agencies that serve people living with HIV and AIDS. For years the charities named in his will never received any payments as Sylvester had borrowed $350,000 against his future royalties. In recent years with his classic hits now played often on Satellite radio and optioned for film soundtracks – the old debt is paid and the charities are receiving funds. Under the terms of the estate, AEF (AIDS Emergency Fund) receives 75 percent of royalties with the other 25 percent going to Project Open Hand (which delivers meals to homebound HIV clients). In just the six months between July and December 2009 the royalties paid to the 2 non-profit agencies totaled $18,000.