How frightening for the Tates.

Rosemary and Leno LaBianca returned to LA from their weekend away late Saturday night, technically Sunday  morning of August 10th 1969.  They wanted to beat the Sunday traffic.  Think about that for a second.  They stopped at the Chevron Station on Hillhurst for a fill up and a newspaper. 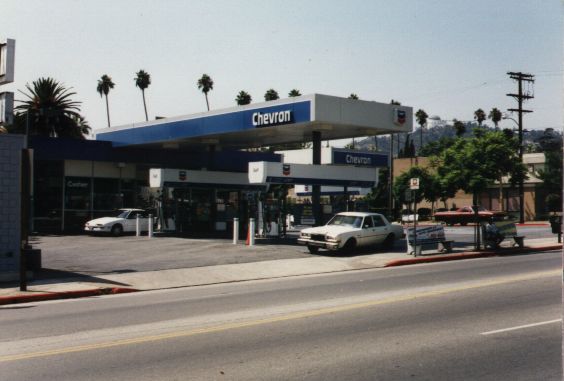 Rosemary commented on the front-page story about the Tate murders the night before. She was spooked. The man that sold them the paper, John Fokianos, was the last to see them alive – aside from the maniacs.  He comped them the special filler section on the Tate murders.  Thanks!  No doubt they drove home discussing the very thing that was going to be happening to them in a matter of hours.

Leno managed the Gateway Supermarket (of which there were two) 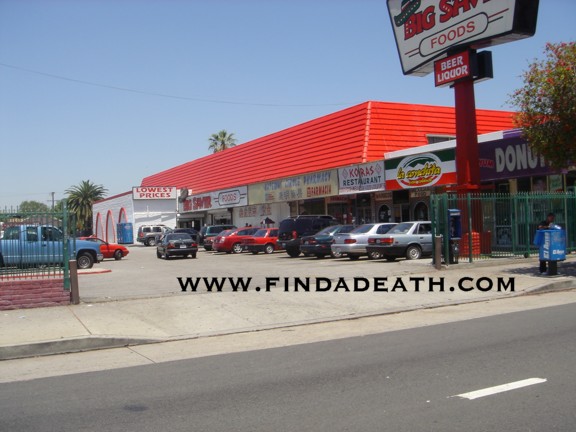 and Rosemary had a boutique in the same strip mall called The Boutique Carriage. 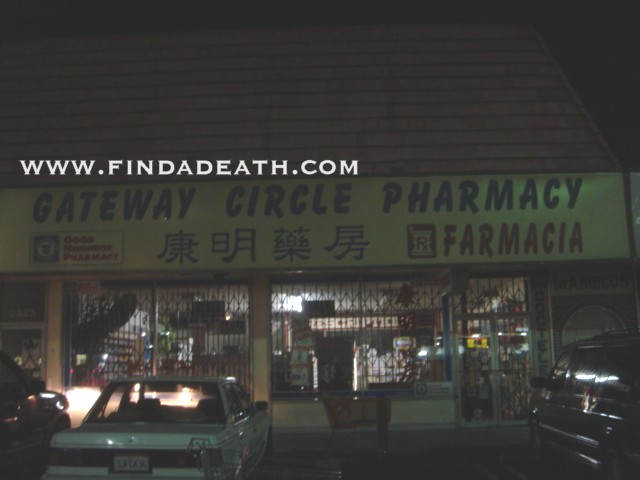 Driving their ’68 green Thunderbird, hauling their boat behind them, they dropped off Rose’s daughter a the place used for Melrose Place, and headed to their Silverlake home on Waverly Drive (phone number 664-3355 doncha know). 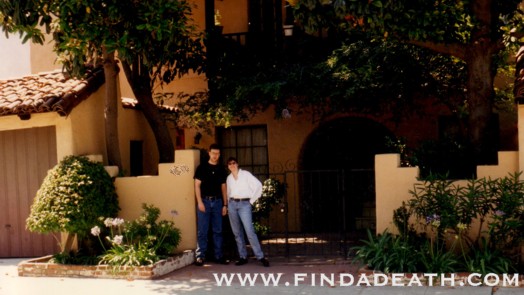 While the rest of Los Angeles had the choice of watching For Whom the Bell Tolls on TV, 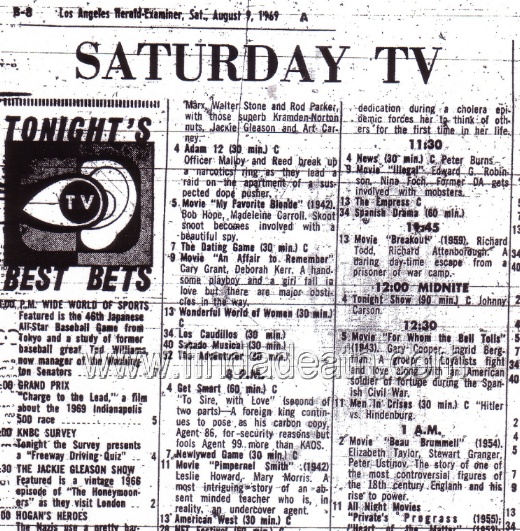 Ro and Leno received some not so very nice visitors. Charlie led the gang, Tex, Krenwinkle and Leslie Van Houten, a budding psychopath. Officially they picked the LaBianca house because Charlie had partied in the house next door.

Charlize left the others in the car and climbed into a back window of the house. 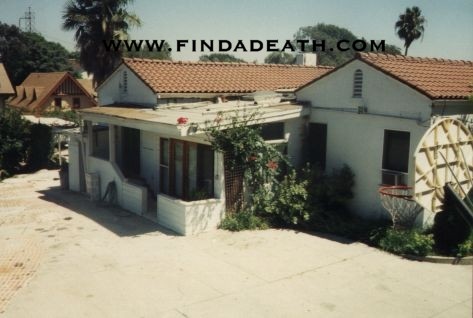 Leno had nodded off in the living room, while reading the paper. Charlie woke him, and assured him that all would be fine if he cooperated.  He then tied Leno’s hands behind his back with a leather lace he kept around his neck. 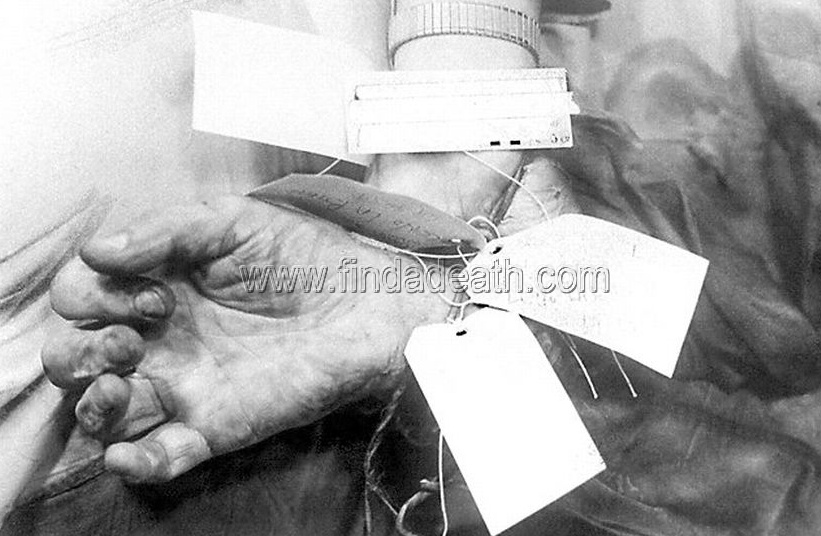 Rosemary was in the bedroom.  He brought her into the living room, and did the same. The search for loot led Mrs. LaBianca back to the bedroom. Charlie left the couple and returned to the car. The LaBiancas missed a very important opportunity to flee out the back door. Charlie took the car and left for the ranch, and had Tex, Krenwinkle and Leslie to do the dirty work.  Oh, he also took Rosemary’s wallet, wiped off the fingerprints, and hid it in a ladies bathroom in Sylmar, thinking a black person would use the credit cards and start the race war.  True. (ish.)  I believe that Manson’s followers believed in the race war (Helter Skelter) but I think Manson’s own motives where very different.

According to Tex, he put a pillowcase over Leno’s head (Leslie thinks she might have done it) and tied a lamp cord around his head and mouth.  Rosemary was taken into the bedroom.  Leno was gifted with 26 stab and puncture wounds.  Rose heard Leno dying, and panicked.  She took the lamp that was attached to the cord around her neck, and started swinging it blindly around the room.  Eventually she was overcome.  Pat stabbed her once and hit the collar bone, and the knife bent.  Lovely.  She ended up being stabbed 30 times before Tex made Leslie get her hands dirty.  Ol’ Lez took a knife and kissed Rosemary’s lower back with it, 16 times.  This was after Rose was dead already, but Lez could not have known this.  This is poor Rosemary, (WARNING: DEAD PIC!) dead. 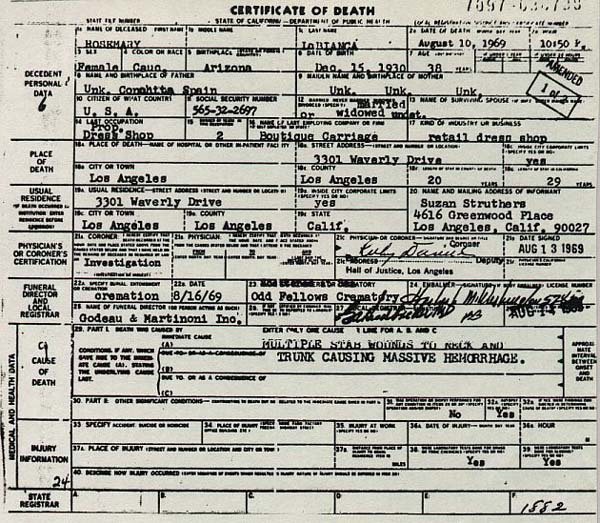 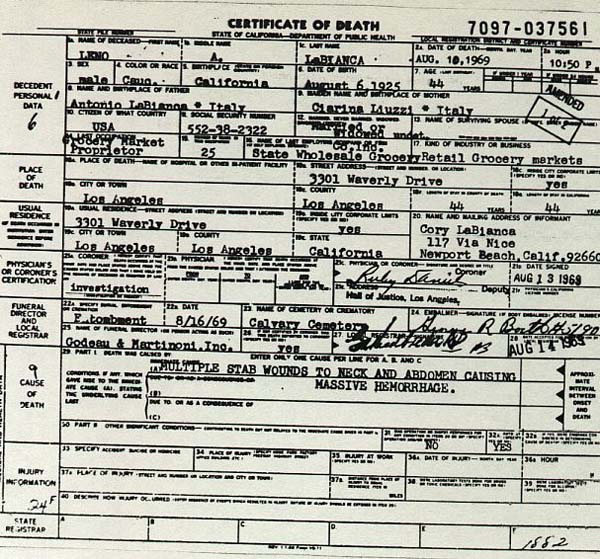 More art work. This time Pat carved the word “WAR” in Leno’s (ANOTHER DEAD PIC WARNING!) stomach, and then wrote “Death to Pigs” and “Rise” on the walls in the victim’s blood.  She left the fork protruding from his stomach (after twanging it playfully.  true.). 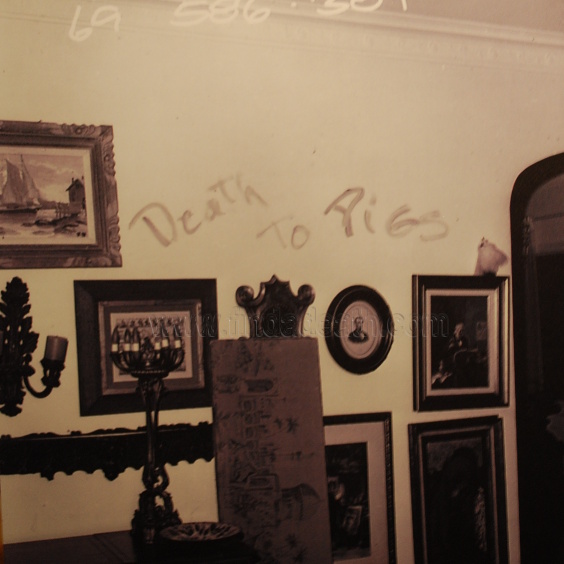 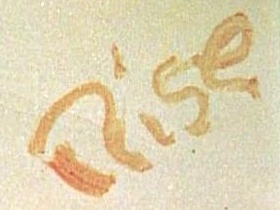 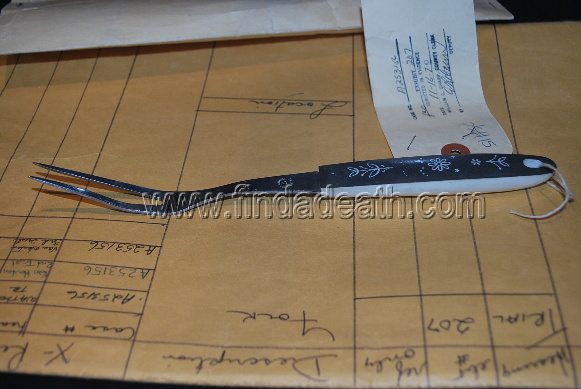 “HEALTER SKELTER” (big dummies spelled the name of the movie wrong) was written on the fridge. 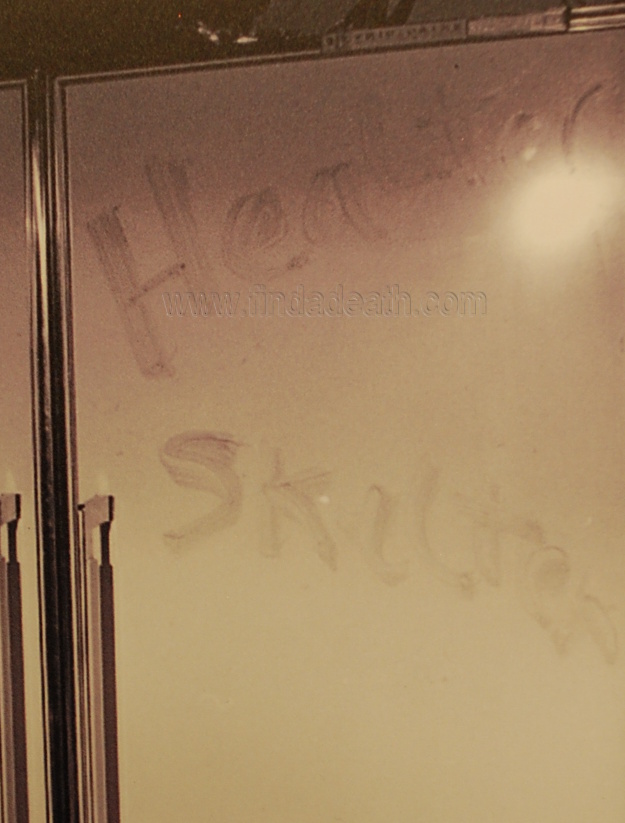 I did it once in ketchup on a friend’s fridge, and scared the crap out of her. Try it. It’s very funny.

After the murders, the killers showered, sat in the bushes in front of the house eating chocolate milk and cheese – nicked from the LaBianca fridge, and hitchhiked back to the Spahn Ranch where they lived.  Oh yeah, they ate watermelon too, and left the rinds in the kitchen sink, to make it look like black people had done the murders.  True.

The bodies were discovered about 8 p.m. the next night by Rosemary’s son, (Rosemary’s Baby?) Frank.

Rosemary’s daughter Susan insisted that Rosemary wanted to be cremated – so she was, and scattered at sea.  Leno was buried in Calvary Catholic Cemetery, because his arrangements were completed, and he already had family there.  There was a joint rosary said for the both of them, on Friday night.

Trivia: The address on the LaBianca house was changed from 3301 to 3311. The house has gone through some renovations, but still looks pretty much the same. 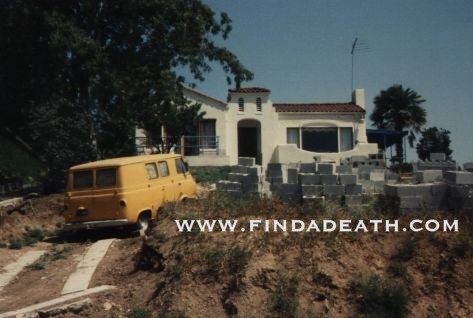 March 2002 – Findadeath friend and my pal Cole sends us this:  I just reread the Labianca story and thought id tell u a couple of things. Manson partied at the house next door{3267 Waverly} to the Labiancas, when his friend Harold True lived there in ’68, prior to the murders and prior to Leno and Rosemary purchasing 3301 Waverly from his mother. Leno had spent his teen years living there. the house was known then as “Oak Terrace”. True even visited Manson in jail after his arrest. 3301 was vacant though.  When True lived at 3267 the neighbors complained about the loud parties. The Labiancas not the complainers though.

On Aug 10, ’69, Manson parked in front of 3301 and walked up the curved driveway of 3267 and cut across to 3301. The pic you took of the back of the house shows part of 3267.  It was said in a article on www.mansonmurders.com, that Susan Struthers, Rosemary’s daughter, had dated a biker associated with Manson. It was also mentioned that the Labianca home was “creepy crawled” by the “family” just prior to the killings. In a book written by his first wife Alice Labianca, she said Leno didn’t want his kids coming to 3301 cause of the weird happenings prior to the murders.

Another hunk o history gone.  The LaBianca gas station is no longer as of June 2004.

Released in early 2009 – see our own full length documentary based on these crimes.

3 thoughts on “The LaBiancas”