The Stooges originally consisted of Larry Fine, Moe Howard and his brother Shemp. The trio went through several cast changes – all of which are exhausting – but I’ll try to keep it simple. I’ll probably still get it wrong though. Please feel free to hop in and correct me.

I thank Findadeath.com friend Tami Dingle, for sending me a copy of the Stooges television movie that was on recently.  I really enjoyed it.  There was no new information (except for the portrayal of Shemp peeing himself), but it was good fun.  The guy that played Larry was spookily good.  Anyway… onwards.

Hey, you in the center with that spittoon haircut. What’s your name?

Findadeath.com friend Rodney Mountain sends this email:  Missing from the Findadeath story is also the original straight man for the stooges. The Stooges were formed as a part of Ted Healy’s stage act in the mid 1920’s. Moe, Larry and Shemp were Ted Healy’s original stooges until either 1930 or 1931, when Ted left a Broadway show in a huff, taking Moe and Larry with him. Shemp decided to remain with the show, and young Jerome shaved his hair off to become Curly for the act.

Ted had been out drinking at the Trocadero night club on December 21, 1937 when an argument broke out between him and three college fellows. Ted, a very disagreeable drunk, had called them every disgusting name in the book and offered to go outside the club to take care of them one at a time. Ted didn’t have a chance to put up his dukes when he went outside, the three men jumped him, knocked him to the ground and kicked him in the head, ribs and stomach, generally kicking the shit out of him. Joe Frisco, a friend of Ted’s, came to the scene and picked him up from the sidewalk and took him back to his apartment.

Ted died from acute toxic nephritis, which basically means inflammation of the kidneys.

Findadeath.com friend Bob Siler tells me that he saw an interview with Sam Marx, the writer.  Sam said that one of the guys that beat the hell out of Healy was none other than Wallace Beery, and MGM covered it up.  Interesting!

Findadeath.com friend EJ Fleming sends us this April 2002:  I have pictures of Joe Besser’s house if you want to add them to the Stooges page. Also, Ted Healy was indeed beaten to death by Wallace Beery. I’ve been researching a book on Eddie Mannix and Howard Strickling (the MGM ‘fixers’) and have been told that numerous times by MGM insiders who knew all involved. Both Beery and Healy were obnoxious drunks who got into bar fights regularly. Mannix and Strickling invented the story of the phantom college boys who supposedly beat him up. They were never found or identified, for obvious reasons.   Cool stuff EJ, and I look forward to the Besser pics. 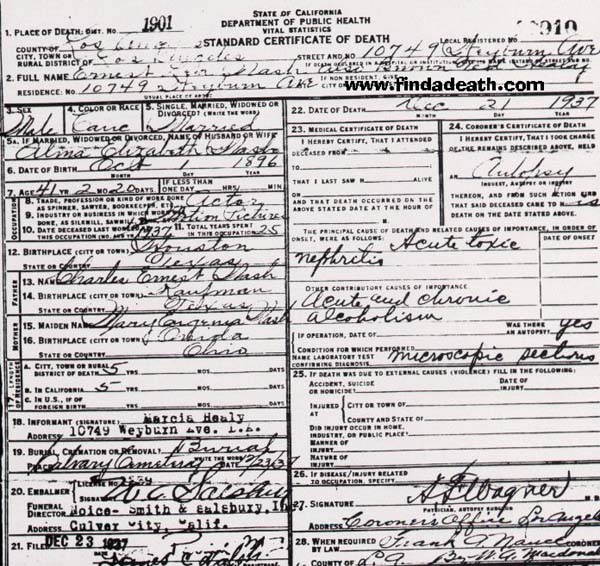 Curly was the first to go. They were filming Half-Wits Holiday in 1947, and Curly completed everything except the pie fight at the end, when Moe went over to him to find out why he wasn’t on the set for the final scene.  Moe found him sitting down, unable to talk.  He had suffered a stroke. He died of complications due to several strokes, on January 18th, 1952, at the Baldy View Sanitarium. He was 48 years old. His usual address was 4524 Fulton Avenue in Van Nuys. His house is long gone, and this building now occupies the premises. 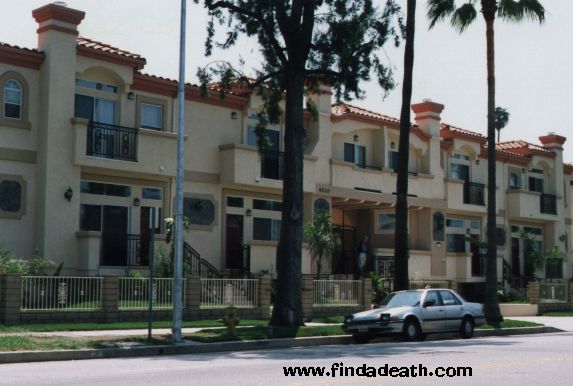 His funeral was held at Malinow and Simons, at 818 Venice Blvd (don’t know if it’s still there), and he is buried in Home of Peace Memorial Park.

October 2003, Findadeath.com friend Joe Walker sends this in:  The former sanatorium where Curly passed was called the Baldy View.  It is now renamed the Green Acres Lodge. 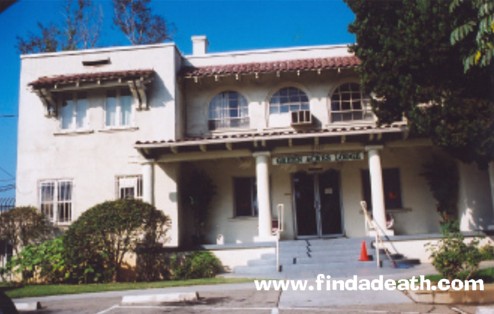 Out of deference to the several people rattling the iron bars trying to get out, I did not photograph them.  It is very creepy in person.  Behind this old building is a newer convalescent hospital. 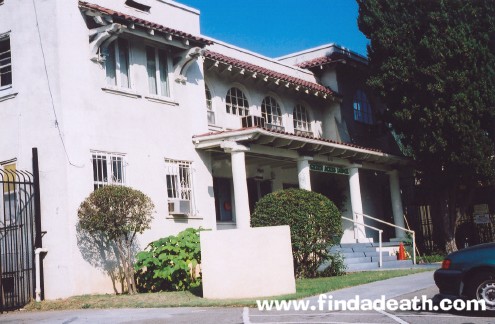 Thanks Joe, for the field trip.  It sounds like it would be a terrific place to visit on Halloween night, right before going here.  I appreciate the leg work.  – S 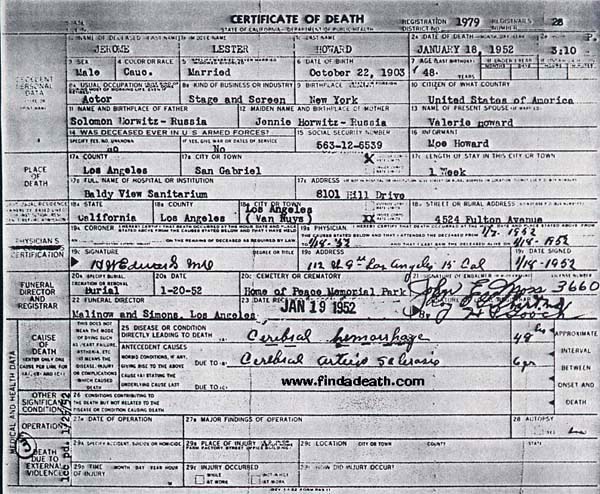 Update: February 2015: Curly gets his own Death Hag sticker. 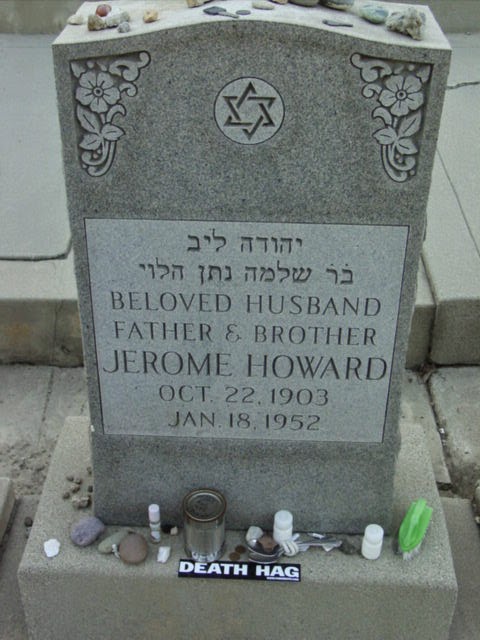 That’s for now. Remind me to kill you later. 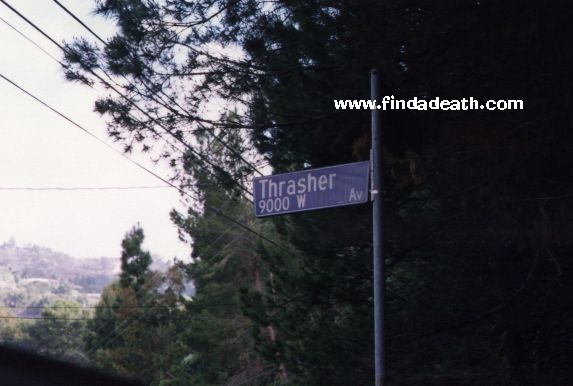 His address was 9061 Thrasher. 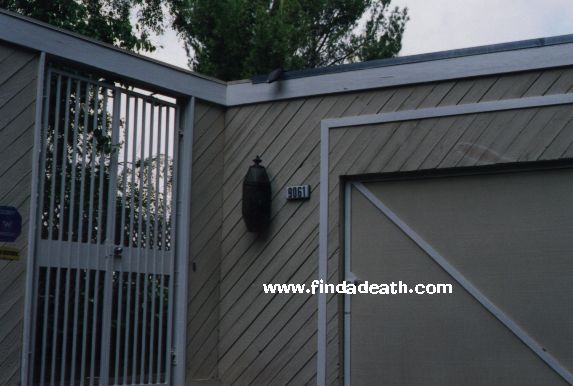 He had just completed his memoirs, and on Sunday, May 4th, 1975, Moe succumbed to lung cancer at the Hollywood Presbyterian Hospital, on Vermont in LA. 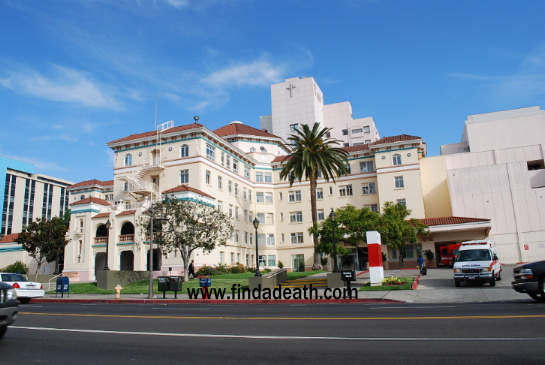 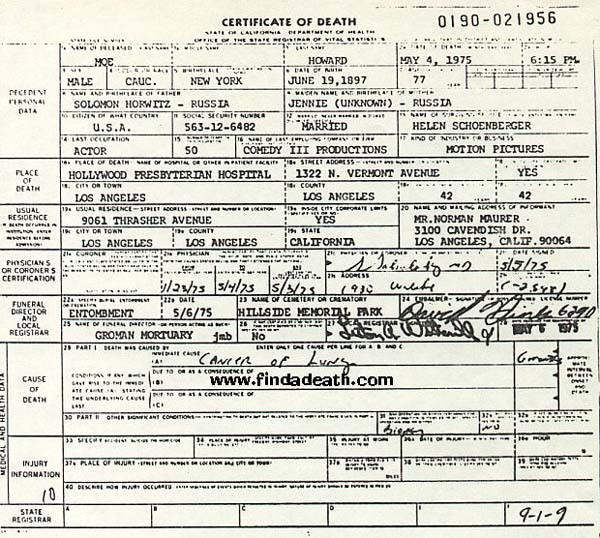 Larry Fine lived in the Knickerbocker Hotel, in Hollywood till about 1970. 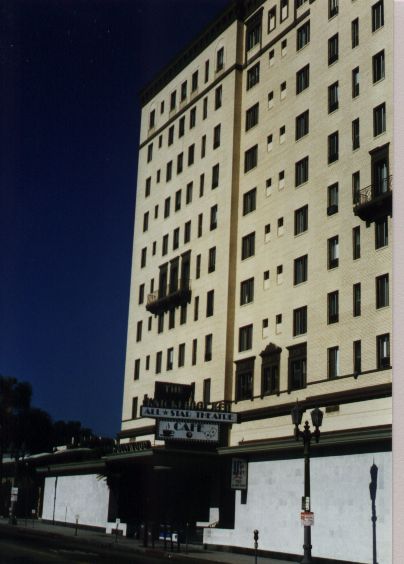 Mabel passed away in 1967 (An anonymous friend of Findadeath.com pointed out my error about them both moving into the home.  To my delight, did not jump down my throat about it.  THANK YOU.), and Larry moved into the Motion Picture Country Home, where he died on Friday, January 24th, 1975. 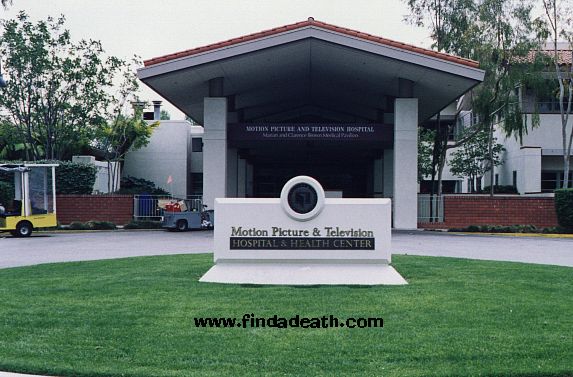 He was 72 years old. His funeral was held at the Church of the Recessional at Forest Lawn Glendale on Monday the 27th at 2 p.m. He is buried in Forest Lawn, Glendale. 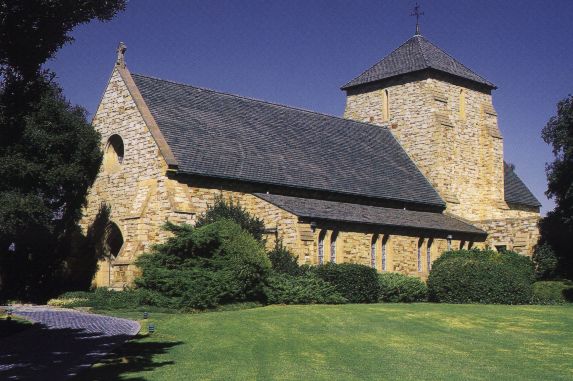 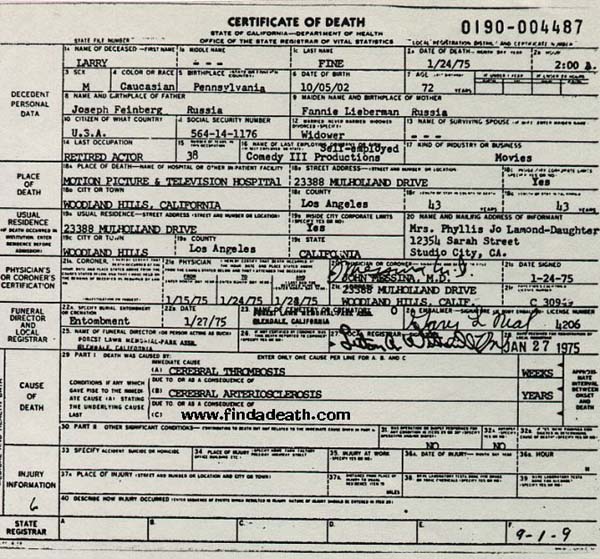 Please officer, I got six wives and two kids!

Shemp Howard lived with his wife Gertrude on Riverside Drive in North Hollywood. 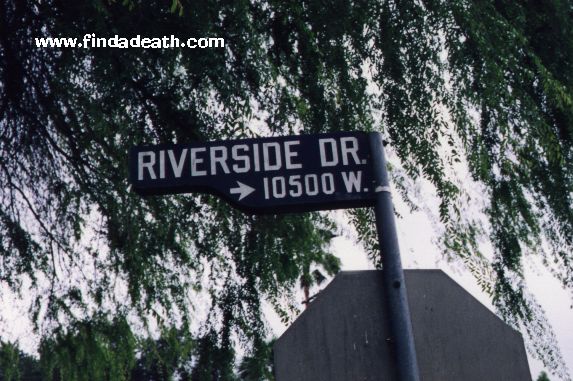 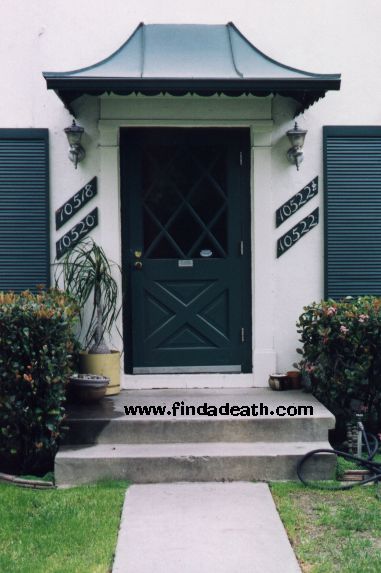 It was November 22, 1955, when he succumbed to a heart attack on the way to St. Josephs Medical Center in Burbank. 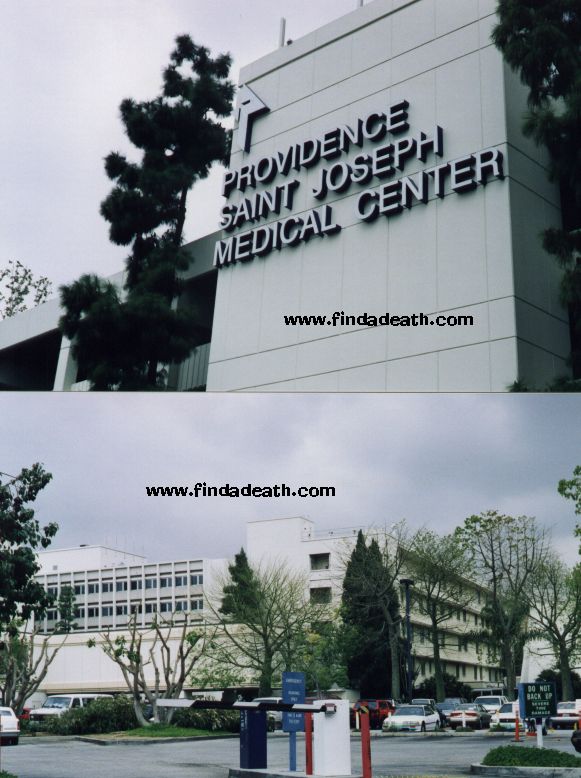 He had the heart attack while he was on his way home from the fights.  He was lighting a cigar at the time. Thanks to Findadeath friend, John Raspanti, for that info.  He was 60 years old, and is interred in Home of Peace Mausoleum. 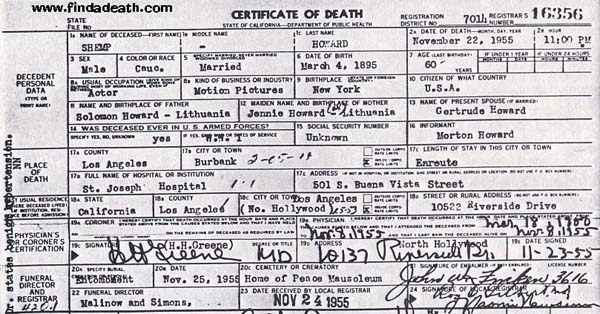 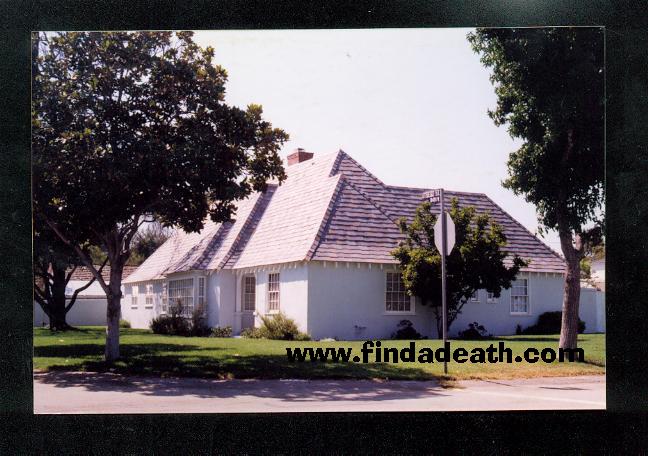 He was 80 years old. He had a service attended by Emil Sitka, and just a few others. Joe left his money to his wife Ernie, who was a double amputee with Alzheimer’s. She died shortly afterwards, and his estate went to the Motion Picture Country Home. 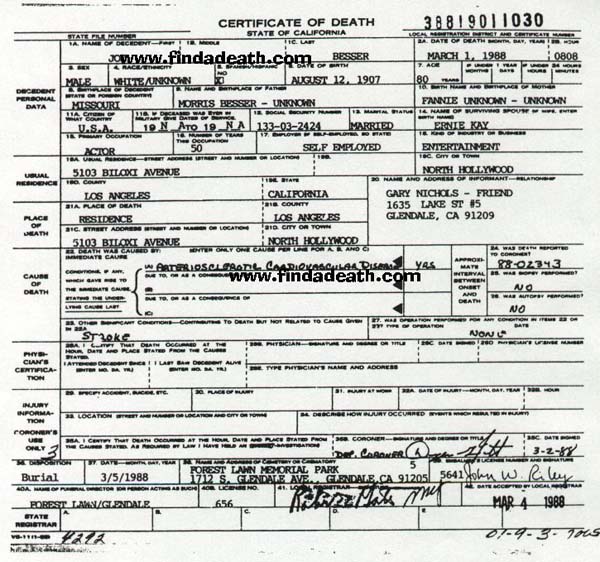 Joe DeRita died on July 3, 1993, nine days before his 84th birthday after several strokes. Up until about a year before he died, he was living with his wife Jean in Burbank. After he became ill, he was moved into the Motion Picture Country Home, where he lived for about a year. His wife didn’t want people to know, so she would tell people that he was asleep in their home, while he was literally wasting away in the MPCH. His funeral was attended by less than 30 people, at a small Burbank mortuary. My buddy Steve was a pallbearer, and kindly put a cigar in Joe’s pocket. His wife Jean, and maybe one of Larry’s granddaughters were there. Here is a Mass card from the funeral. 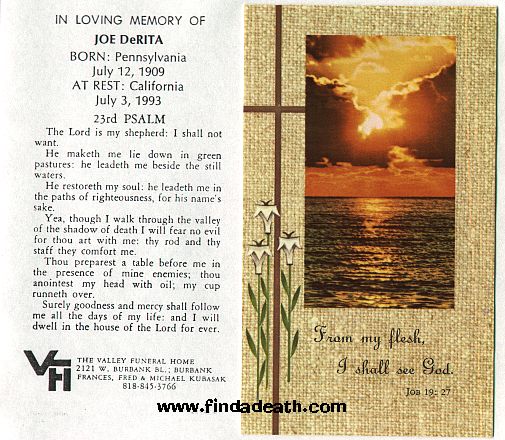 Stooge fans bought the black granite with Joe’s face etched in it, and it reads, “The Last Stooge.” As a point of trivia, the tombstone was made by Mickey Carroll, one of the Munchkins from The Wizard of Oz.

Trivia:  There was only one film in which all three of the Howard brothers appeared in. 1947’s “Hold That Lion” saw Shemp in the third stooge role, but had an amusing cameo of Curly as a sleeping passenger.  Thanks Rodney.

A company called Comedy III handles the residuals for all of the Stooge films and merchandise. Joe DeRita’s stepsons, who are lawyers, and Bela Lugosi Jr, formed it. After some huge falling out with Moe and Larry’s families, and Lugosi Jr. as well, the stepsons of a substandard Stooge control the estates. I’d love to know the real dirt. They sound like jerks. Certain percentages (after the penthouse office, salaries and expenses) go to the other Stooge families.

This is in from Findadeath.com friend Terry Fielding:

You guys give a good idea of what stars suffered through in their last days. About the Three Stooges, Moe’s death certificate says he worked for Comedy III productions. I thought that Normandy Productions had that claim. Norman Maurer was Moe’s son in law and was a bit of a pain pushing Moe and the guys into projects (Kooks Tour) that didn’t do anything but line his pockets. He also wrote some cartoons for Hanna-Barbera and produced a few movies without the gang.

After Maurer died, his widow, Moe’s daughter and their sons took over the franchise until Lugosi and DeRita’s stepsons complained that (boo-hoo) DeRita died a broken man. Not a skinny man, just broken. Didn’t he save any of his money, he made a small fortune with Stooging and he worked in Burlesque before.  His step-sons were lawyers, so he couldn’t have been that destitute. Moe’s family should have control over the estate with income from it going to Larry, Moe’s, Curly’s, and Shemp’s family.

And what the hell does Lugosi Jr. have to do with all of this? The Stooge shorts have a half-hour format with insulting trivia and little known facts filling up the spots between commercials. Lugosi and DeRita’s stepsons names are visible during the end credits. Blood-sucking leeches. DeRita made his fame and fortune, he should have saved his dough instead of his gut.”

I love a good rant.  Thanks Terry.

Hi, Scott,
Another boring day at work, so I decided to do something constructive… like visit your site again! I enjoyed your stories concerning The Three Stooges; like most kids I was a fan of them when I was growing up. I found a GREAT site concerning Moe’s later years.

A kid by the name of Bob Bernet began writing fan letters to Moe in 1968. They corresponded up until Moe’s death in 1975. In the summer of 1973, after graduating from high school, Bob and a buddy took a road trip from Texas to California, and ended up on on Moe’s front porch!!

Moe and his wife Helen graciously welcomed them into their home, and gave the guys a tour. Bob had his Super 8 camera with him, and several stills are included in the site. The site contains the story of Bob’s visit, numerous photos, obits for all the Stooges, copies of Moe’s replies to Bob’s letters, and much more.

Thanks, John.  I did check it out, and you are right.  Seeing Moe in his later years made that site well worth the trip.  I appreciate you letting us know about it – Scott (2014: site link isn’t working or we’d share!)

My father attended the opening of the Desota Theatre in Rome, Georgia in the early 30’s. It was one of the first theatres designed specifically for sound movies. It still exists despite myself and thousands of other kids putting our feet on the seats and riding along with the Cisco Kid and Roy Rogers. It is now used as the Rome Little Theatre.

The Three Stooges appeared at the opening – selling tickets, seating customers, and generally creating havoc throughout the evening. My father always remarked that, while he couldn’t appreciate the Stooges comedy – (I loved them!!) – that it was one of the most enjoyable and entertaining evenings he had ever attended.

Their visit to little Rome, Georgia was probably the biggest thing to happen to the town since the arrival of General Sherman. Thanks for letting me tell you my tale. Keep up the good work!!

Thanks, Tom.  What a nice story.

5 thoughts on “The Three Stooges”