Life isn’t worth the candle. While we’re here we should laugh, be gay and have fun.

by Dominic Druce and me

Thelma Todd, once known as ‘the Ice-Cream Blonde’ and as ‘Hot Toddy’ to her friends, is now largely remembered as the victim in Hollywood’s greatest unsolved whodunnit.

Born 1906 (not 1905 as reported in many books) in Lawrence, Massachusetts, she grew up scandalizing the community by never wearing underwear, and working her way through the local hunks. Doing the Beauty Pageant circuit, she ended up in Hollywood in 1926.

Over the next nine years, she made seventy films, mostly as a foil for comics such as Harry Langdon and Charley Chase, as well as six with Laurel and Hardy. Her best were two with the Marx Brothers- ‘Monkey Business’ and ‘Horse Feathers’.

Her vivacious on-screen personality only hinted at her riotous private life. She had so many drunken car crashes going from party to party, that the studio had to insist she have a chauffeur. Her marriage in 1932 to playboy, Pasquale “Pat” DiCicco, quickly degenerated into a series of drunken brawls, one of which resulted in her having an emergency appendectomy. For consolation she turned to drink, drugs and to director, Roland West. She divorced DiCicco in 1934. 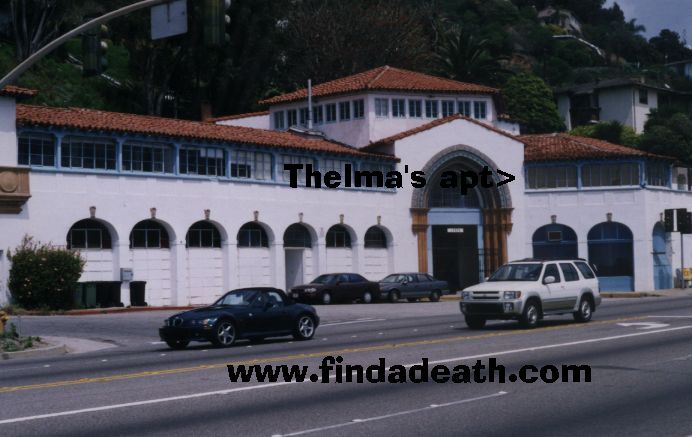 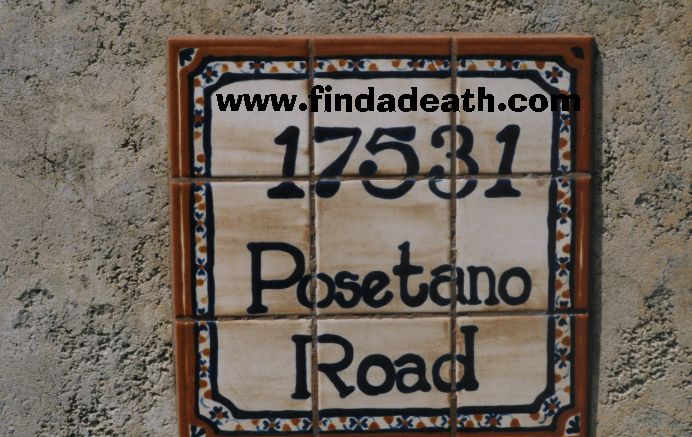 In order to get to the garage from the Cafe, you had to climb a staircase of almost three hundred steps. 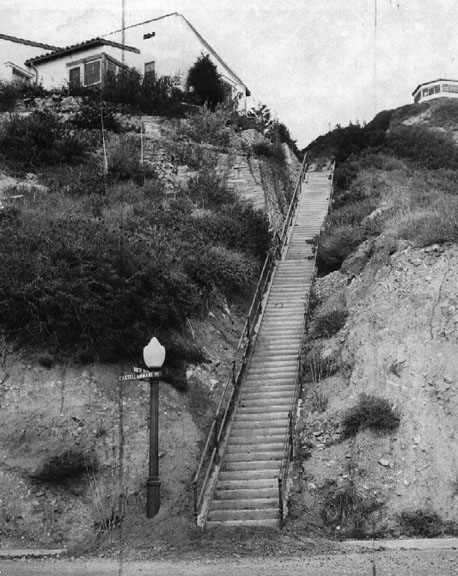 The stairs are gone now, but this is where they used to be. 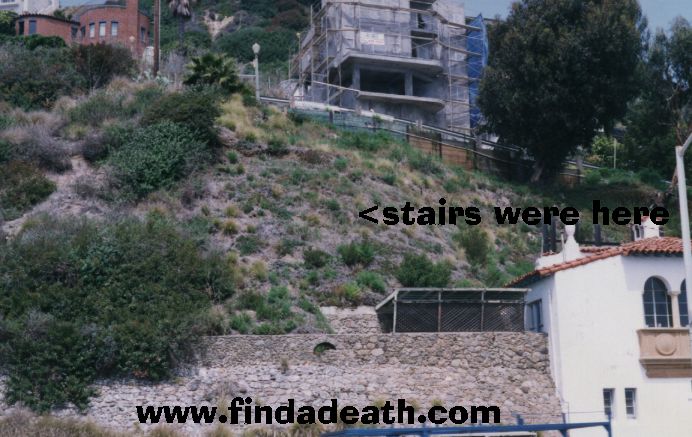 A really ridiculous, complicated route, to park your car.

Around this time she began an affair with gangster Charles ‘Lucky’ Luciano, who got her hooked on amphetamines in order to keep her in line. He began persuading her to let him use an upper room at the Roadside Cafe as an illicit gambling den, but she persistently refused. At dinner one night in the Brown Derby, she screamed at him, “Over my dead body!,” to which he is supposed to have replied, “That can be arranged.”

On Saturday, December 14th 1935 Thelma was driven to a party, at which she was guest-of-honor at the Cafe Trocadero at 8610 Sunset Blvd. You can still (apparently) see the three entrance steps at the south-east corner of Sunset Blvd and Sunset Plaza. Roland West had told her to be in by 2 am or he would lock her out. The hosts were British music-hall comedian, Stanley Lupino, and his actress daughter, Ida, a close friend, who had agreed to a request by DiCicco that he be seated next Thelma at dinner.

[N.B.: From now on no two accounts agree on exact times].

DiCicco, however, arrived with actress, Margaret Lindsay, as his date and joined another group instead, leading to a brief spat in which Thelma accused DiCicco of deliberately humiliating her. Just after midnight, DiCicco made a phone call from the lobby and left an hour later with Lindsay. Thelma proceeded to get drunk, and confided to Ida that she was seeing a wealthy San Francisco businessman.

As promised, West locked the door to the apartment at 2 am. Thelma left the Cafe Trocadero about forty-five minutes later, promising to see the guests at a party later that afternoon at the home of Mrs Wallace Reid. She was driven away by chauffeur, Ernest Peters, in a Lincoln Phaeton touring car. They arrived at the doors of the Sidewalk Cafe between 3.15 am and 3.30, depending on accounts, and Thelma refused Peters’ usual service of walking her up the steps that led to the apartment entrance. 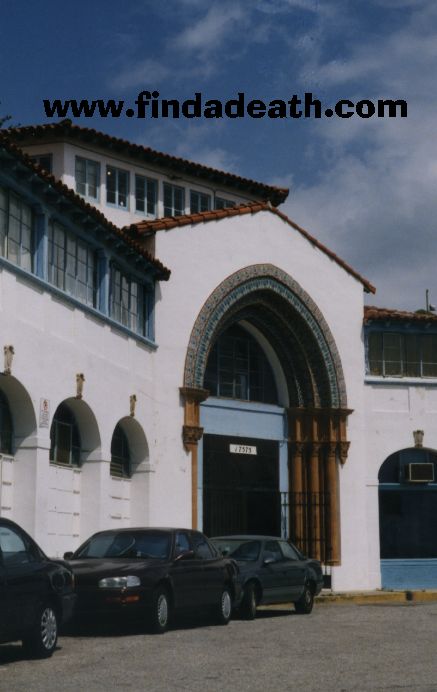 Some accounts have Peters seeing a brown Packard with its lights off, parked or approaching, before he left.

West claimed that during the early hours of the morning he heard water running in the apartment, but later said that it might have just been the coolers in the bar below.

At 9.30 a.m. a druggist claims that Thelma came in and asked him to make a call for her but that she then disappeared. That afternoon, several witnesses claimed to have seen her driving with a dark-haired man. Mrs. Wallace Reid claims that at around 4.30 pm, Thelma called her, using the nickname ‘Hot Toddy’ that she herself had coined, apologizing for being late but promising to surprise her with a mystery guest.

In the morning of Monday, 16th December the maid, May Whitehead, came to clean the apartment above the Café.  At 10:30 am she climbed the staircase to the garage, where she found Thelma slumped dead at the wheel of her Packard convertible.

The ignition was on, but the engine not running (the car was not “still spewing a noxious fog of carbon monoxide” as some accounts relate) and the door of the garage had been partially open. There were two gallons of fuel inside the car, and a smudged handprint on the door. She was only 29. 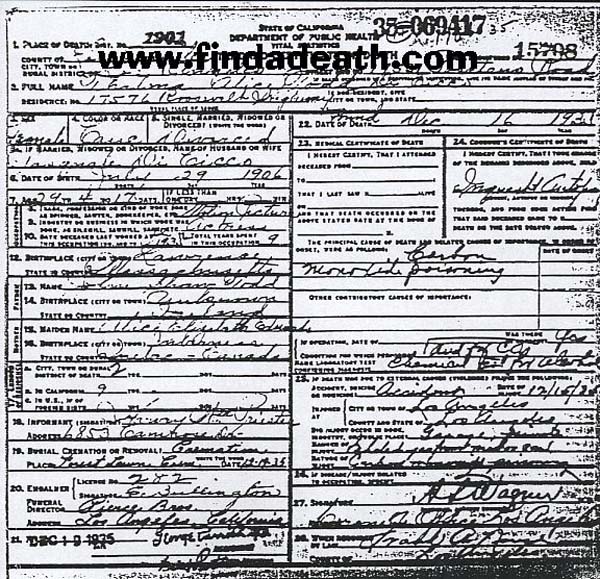 When I visited the scene, I found the garage doors after getting lost many times. 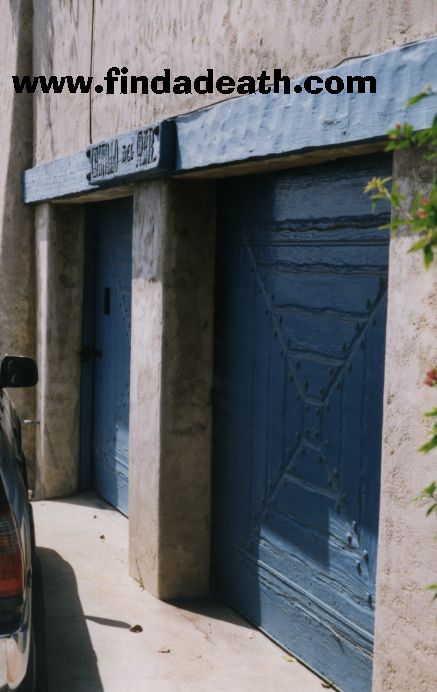 When I did find them, there was a stupid car parked in front, so the pics are not ideal.  Thelma died behind the door on the right.  (I’ll have what’s behind door number two, Monty).  There is no window on that door, but there is one in door number one, so I stuck my camera inside, and blindly snapped these two pictures. 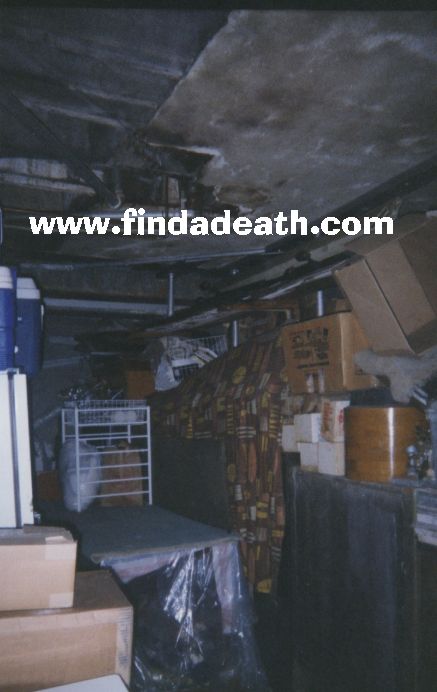 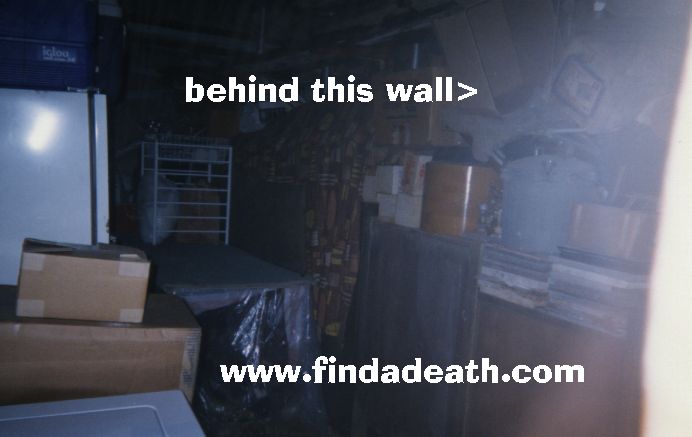 What I don’t do for you.

Thelma was still gussied up in her Saturday night outfit of silk and tulle dress, mink coat and diamond jewelry. Her high-heeled sandals were perfectly clean, although when a policewoman of similar build later attempted to climb the steps up from the Highway, her sandals were dirty. Her lip was bruised, her face streaked with blood, her nose broken and a dental filling dislodged, but her make-up, unsmudged. Her fingernails were undamaged, indicating a lack of struggle. Her blood revealed a level of alcohol inconsistent with her having been able to do much at all. One account says a .13 blood alcohol reading, and a 75-80% carbon monoxide saturation. There were beans and peas in her stomach, although none had been served at Ida Lupino’s dinner.

L.A. County Surgeon fixed the time of death at between 5 and 8 am on Sunday morning, and explained the blood by suggesting that Thelma had struck the wheel with her head. The inquest threw up a number of theories. One, because she was locked out, Thelma had turned on the engine to keep warm and fallen asleep; however, maid May Whitehead stated that she had given Thelma her key and it had been found in her handbag. West stated that frequently Thelma had woken him up by throwing stones or smashing a window, and after all, the door was open. Another, having decided to go out again, she turned on the motor, passed out, and suffocated. The Cashier at the café slept in a room above the garage and had heard nothing. The Coroner’s report runs to over 100 pages.

Findadeath friend Tim sends us three posthumous photographs – firstly, another look at Thelma at the wheel. 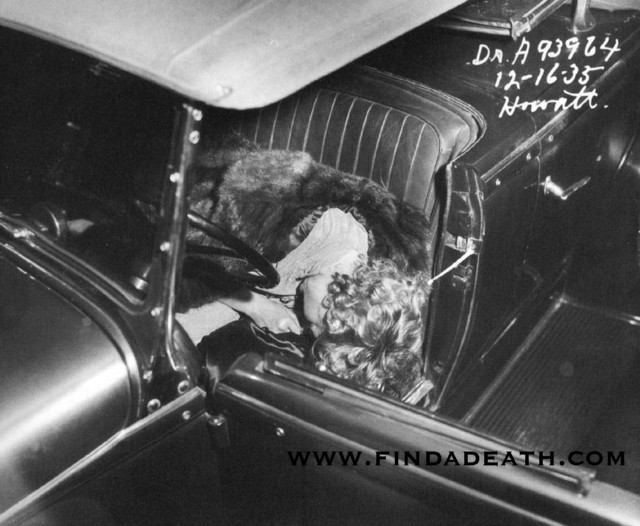 The next two are rather oogy – for those easily disturbed, do not click to see Thelma on the slab, 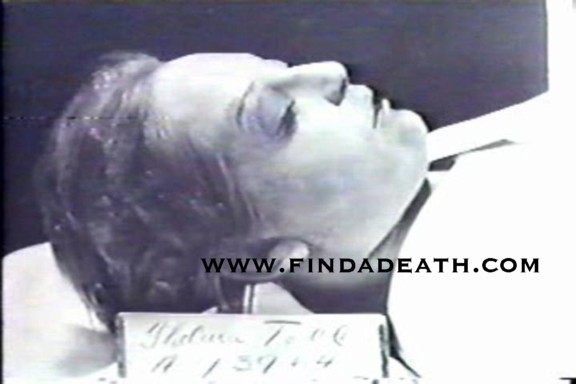 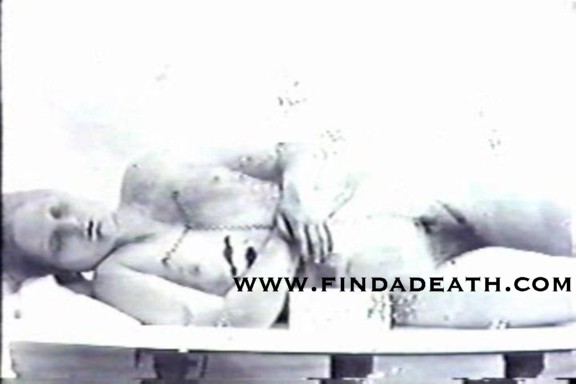 A verdict of suicide was returned, then overturned in favor of accidental death, and on December 21st LAPD dropped their investigation.

Thelma’s funeral took place at Forest Lawn. They do everyone. Thelma was in an open casket 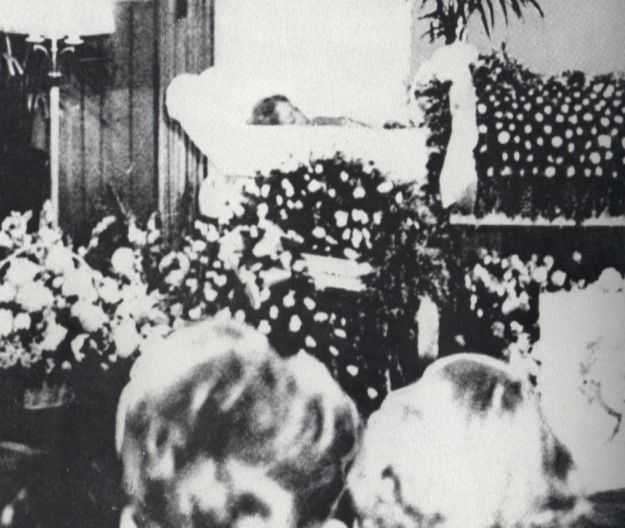 covered in yellow roses for the public viewing. 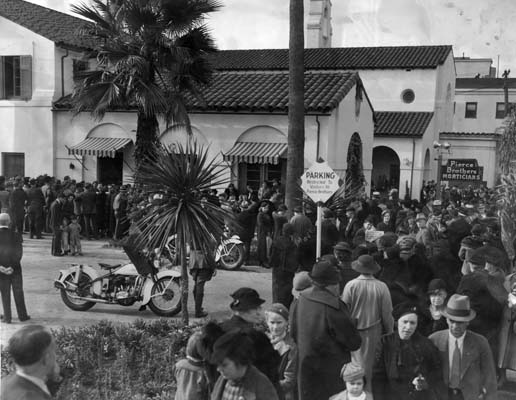 Here is another picture of her casket, thanks to Harry for that. 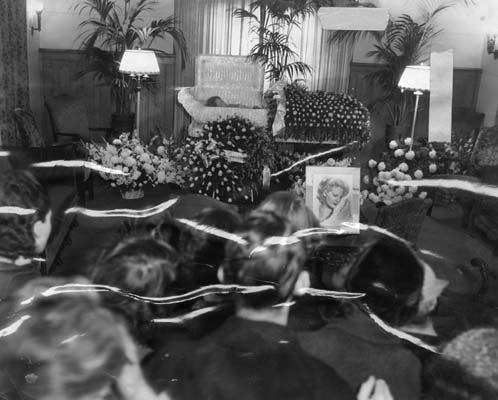 Zasu Pitts apparently said that it looked like she was going to sit up and talk. People always say that about embalmed bodies. I haven’t seen one yet, that looked like they were really sleeping. After her funeral, Todd was cremated, thus making a second autopsy impossible. Upon her mother’s death, Thelma’s ashes were placed in her casket. They are buried in Massachusetts.

In her will, Thelma left everything to her mother, and one dollar to DiCicco.

There was a rumor that in 1952, Roland West made a death-bed confession to best-buddy, actor Chester Morris, that he closed the garage door without knowing Thelma was inside- (without hearing the motor? and opened it next day??!) .

Trivia: In the 70’s and early 80’s the Roadside Café was used as a studio for religious film production.

Trivia:  Thelma was used to getting death threats by mail, from freaky fans.  One of her maid’s regular chores was to bundle them up and drop them off at the local police station.

Trivia:  Findadeath.com friend Joe sends us:  In the film Monkey Business, Groucho Marx told her, “You’re a woman who’s been getting nothing but dirty breaks.  Well we can clean and tighten your brakes, but you’ll have to stay in the garage all night.”

Your info on the car in which Thelma Todd was found says it was a Packard.
The car is her 1932 KBV12 Lincoln Phaeton, which was more expensive and faster than a Packard. I have a photograph of her standing in front of it when new.