Tod was an intensely mysterious, extremely private man.  He directed two of the most famous horror films of all time: Dracula, and my personal favorite, Freaks.  The book Dark Carnival by David Skal and Elias Savada did a great job of enlightening me to his life, although this particular ending is quite sparse, but his entire career is represented here.

He was born Charles Albert Browning in Louisville, Kentucky.  In fact, his uncle invented the Louisville Slugger.  He literally ran away to join the circus at an early age, and chose to call himself Tod which means trickster – also it translates to DEATH in German.  Tod was a huge baseball fan.

He loved animals, and once had a parrot that would always ask, “Where’s Dorothy?”  He also had a fab home in the Malibu Colony.  It’s a private gated community, which you can only get a glimpse of from PCH.

Browning was a lifelong smoker, smoking Lucky Strikes, and a local Louisville brand called Clowns.  Clowns kill.  In 1962 (sorry, I’m jumping time a bit) he was diagnosed with cancer of the larynx.  In June his larynx was removed, but his health was rapidly deteriorating, and he soon suffered a stroke, and lost his ability to speak completely.

Tod eventually moved in with his good friends The Snows, a couple that lived in Brentwood.  Tod first met the Snows in 1946 – as Dr. Snow was Tod’s veterinarian.

On October 5 he was in good spirits, and the Snows took him to lunch at The Miramar in Santa Monica and returned home.  Later that evening, he retired to bed.  Tod got up at some point to use the toilet, and dropped dead in the bathroom.  Mrs. Snow found him at 7:30 the next morning slumped against the wall.   The mail hadn’t even been delivered yet.  He was 82 years old. 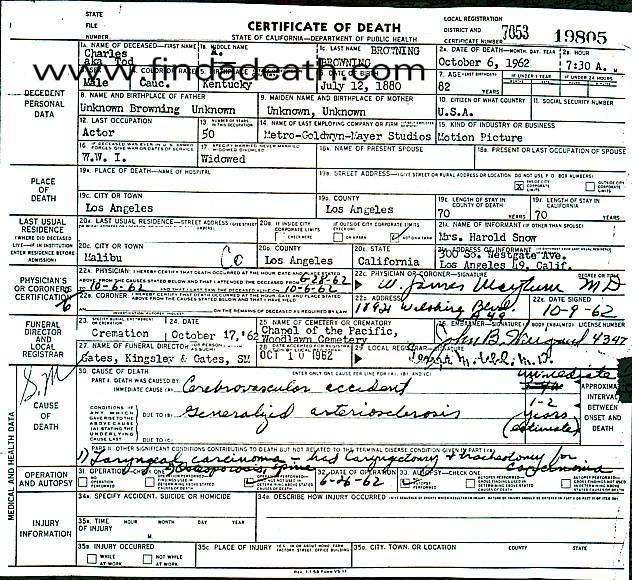 Gates, Kinglsey Gates (they did Reagan) embalmed him.  After visiting hours, a gentleman only known as “Lucky” sat with Browning’s corpse, and polished off a case of Coors beer.  Lucky knew little of Browning’s Hollywood life, but the two were drinking buddies and the pact was made while Tod was still alive.

Tod was cremated at Woodlawn cemetery, and inurned in Rosedale Cemetery.

Back to Freaks, I have a thing for Schlitzie, as I mentioned in another story, real name Simon Metz.  In fact, I had a tattoo of Schlitzie put on my arm as a 40th birthday present to myself.  If you are in London, and have a hankerin to get inked, stop in and see Duncan X at IN2U, and tell him Scott the death guy sends his regards from Hollywood.  Duncan spent a lot of time with me, figuring out exactly how it was going to be, and I’m thrilled with the result.

Another recent demise that’s somewhat related, Tiny Doll of the Doll Family midgets, died recently.  Tiny’s brother Harry and sister Daisy were the stars of Freaks (Billed as EARLES), and when Tiny visited the set, this picture was taken, which she kindly signed for me.  Rest in peace, Tiny.

Thanks to Warren Beath for the help.