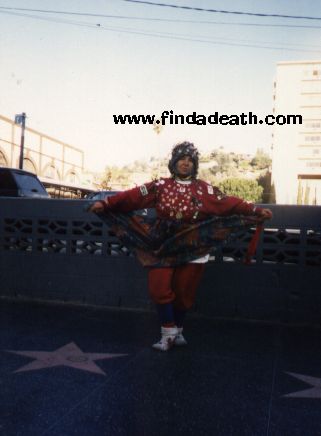 When I worked in Hollywood, two local characters were always about.  Above is Dorothy, known affectionately as “The Button Lady.”  She was nuts, and smelled like a cow, but always brightened my day.

Findadeath.com friend Cathy Rundell sends us this great interview with Dorothy.  Thanks Cathy!

Here’s the interview with Dorothy. It was done in 1993 by John Dunn, and printed in Fiz.

Her name may mean little to most people who frequent Hollywood, but her bedecked form traversing east to west along the “Walk of Fame” is no stranger to any of us who have visited that now dingy, most famous street of Tinsel Town. Commonly known as the “Button Lady” Dorothy Brunett is an especially sweet person with whom I had the great pleasure to finally meet and talk with. Our encounter took place on the cliche corner of Hollywood and Vine.

Dorothy: My name is Mrs. Dorothy Brunett, and they call me the Button Lady. As a matter of fact they’ve been calling me all kinds of names. I tell ya, in one ear and out the other. I’ve been doing this for 15 years. I love tourists; I love all my badges; I love attention like yourself. Big Drill … (as she scans my t-shirt)

Dorothy: Oh, a band. OK! I am crazy about all kinds of music. I love The Beatles. I, all those … jazz music, Beatles music, any kind of music, and soft music.

Fiz: Where are you from originally?

Dorothy: I’m part Persian and Italian. I’ve been here since 1948. I ran away from my husband, who was a doctor. I took my two children, a little boy and a girl. I came out here and married a Navy man. Now, the third husband, I divorced; the second husband died. I’ve been doing this 15 years, since my son went to college. Fifteen years I’ve been doing this!

Fiz: Is there anything you would like to say to the readers of this magazine? It’s going to be all over he world.

Dorothy: Is that true?

Dorothy: What should I say?

Fiz: Anything you want to.

Fiz: Is there anything else you’d like to say?

Dorothy: You’re wonderful. I think, I think of … when I look at you, I think of John Lennon.

Dorothy: What does that mean?

Fiz: What do you do all day long?

Dorothy: Well, at my age I don’t have anything else to do that is important in my life. I’ve already conquered everything, you know, marriage and kids. But I’m just happy to see that everybody’s happy and I go along near the Chinese Theater. I watch like a panorama wheel. From day to day, it’s never the same. It’s surprising to me, so I forget about yesterday, and when I wake up it’s a new day. I get up and say I better go. Even if I dream something bad is going to happen to me. I have to go see what’s really going to take place. I come out, but so far they didn’t kill me. they’ve been trying to kill me.

Fiz: Who has been trying to kill you?

Dorothy: Many people. I’ve been knifed, scissored, choked. Pushed my eye. They hit me on the head. Stole all my gifts. One of them is in jail doing 18 months.

Fiz: Why do people do that?

Dorothy: They’re sick! You know, Bradley [L.A. mayor] said once that Hollywood is an institution. I think his daughter is sick too … (laughing) … You know my biblical name, from where I was born, is Batur. That gives me strength. You know Batur is the name of the city where horses used to fight. The guys get on horses and fight. They ram each other and they’ve got these masks on, you know, like one of those masks. That’s the name of the city. I was named after the city.

Not like this guy.  You had to find him funny tho. 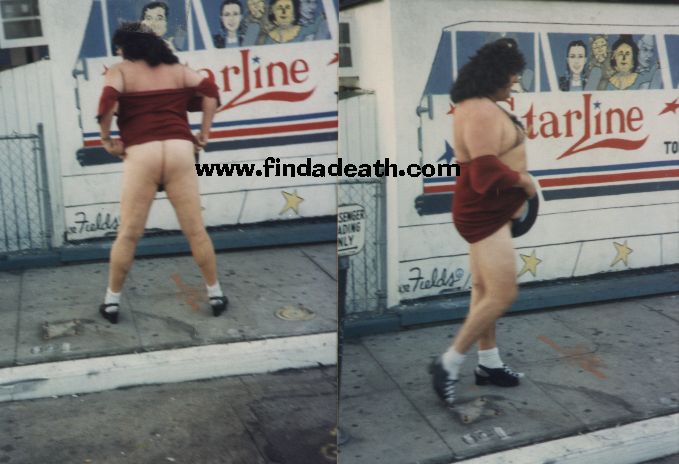 One thought on “Two of My Favorite Hollywood Personalities”