She’s thrilled at anything.

Many thanks to Cathy and Dave Bradford, from Charlotte, North Carolina, for supplying us with these photographs. They’ve been great contributors so far – with the Brandon Lee pictures, and soon to be Frances Bavier pics as well. Way cool you guys. Thank you.

Violet and Daisy Hilton were brought to more modern international attention by appearing in Tod Browning’s 1932 film Freaks. They were also one of the most popular side-show and legit show attractions in history. They worked with Bob Hope (ugh), Harry Houdini and Sophie Tucker, back when such novelty acts were still acceptable. I’ve always adored side-shows/freak shows, and I miss them terribly. Though many of the people came from tragic backgrounds and have had horrible lives, there is a certain romance to the entertainment that I still cannot resist. My absolute favorite is Schlitzie, the pinhead.

As I mentioned, a lot of the “Human Oddities” had tragic circumstances surrounding their personal lives, and the Hilton Sisters were no different. They were born in Brighton, England on June 8, 1908 – with joined buttocks. For some reason most places online show their birthday being in February.  Don’t know why.  Clearly fascinting though, only one birth certificate for two girls. 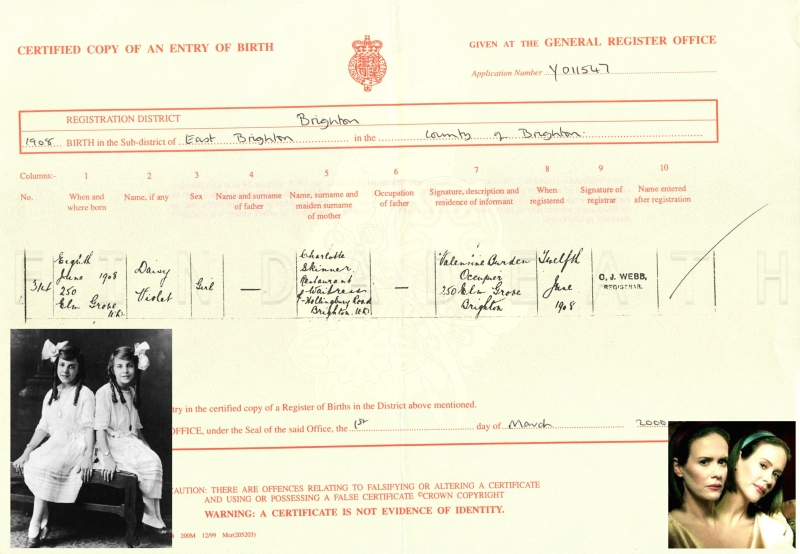 The bones of their lower spines and hips were fused to each other, and they shared the same blood circulation. Their mother was a barmaid that sold them to a midwife, when they were two weeks old. The midwife, “Auntie” and her husband, “Sir” (they also had a daughter, Edith) taught them to sing, dance, and play the saxophone, piano and clarinet. They exploited the girls from the time they were 3 years old – making them tour circuses, fairs and side-shows, and kept all the proceeds. Violet and Daisy were kept from making any friends, and if they disobeyed “Auntie,” they would be beaten mercilessly. At the age of 8, the twins were brought to America.

When “Auntie” finally croaked, the twins were around 15 years old. They were going to make a run for it after the funeral, but it turned out that they were “willed” to Edith and her husband (the new “Sir”) along with all the other earthly possessions. They were going nowhere. Their new owner never let the girls out of their sight, even sleeping in the same room with them. Eventually, the girls were taken from the circus shows, and brought into vaudeville.

It was Harry Houdini who taught the girls to use their mind power to separate themselves emotionally, giving each of them an individuality. They had to be together physically, but could block the other out totally.

When the girls were 23 years old, they were bizarrely (and falsely) named in a divorce case, and sued for $250,000. “Sir” drove them to meet the lawyers, who instructed “Sir” to step out of the room. Grudgingly, he left them with the lawyer. The twins saw this as their chance. The door was hardly shut on the man, when the twins begged for help from the lawyer. They told him in their meeting that they were treated like slaves, and begged him to help get them free of their “owners.” In their own words, “We’ve been lonely, rich girls who were really paupers living in practical slavery.” The lawyer took them on as clients – and sneaked them out of their music lesson, and smuggled them into a hotel. Again, in their own words, “We had dresses sent up, and selected no two alike, and all the silly hats we wanted. We could dress and act our age, and no longer be made up as children, with bows in our hair. I, Violet, had always wanted to drink a cocktail. I, Daisy, wanted to smoke a cigarette. We did.” They took Edith and “Sir” to court, and came away with their freedom and $100,000. It was nothing compared to what they had earned. They lost millions.

After earning their freedom, they went to Hollywood, to be in Freaks. They also made a film later in their life called Chained for Life. It is awful. Just awful. Not even good-bad, if you know what I mean. For the next 20 years, the sisters ran their own careers. In 1962- their appeal was decreasing, and they were touring drive-ins throughout the country with the re release of Freaks. Their agent ditched them in Charlotte, North Carolina, and that is where they stayed. 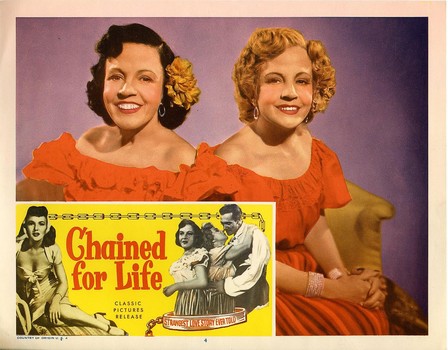 They rented a trailer home for a few weeks and got a job working for a man named Charles Reid who owned a grocery store called the Park-N-Shop located at 3512 Wilkinson Boulevard, in Charlotte. I’ve read many accounts of what their actual job description was, including cashier/bagger (handy), demonstrating hand lotion, and finally (and this is official), produce weighers. There was a long produce section at the back of the store, and at the end of the section, there were two counters where people lined up to have their produce weighed and priced. The counters were turned to accommodate the twins, and that is where they stayed. They kept such a low profile, that a lot of people they waited on had no idea they were Siamese twins. 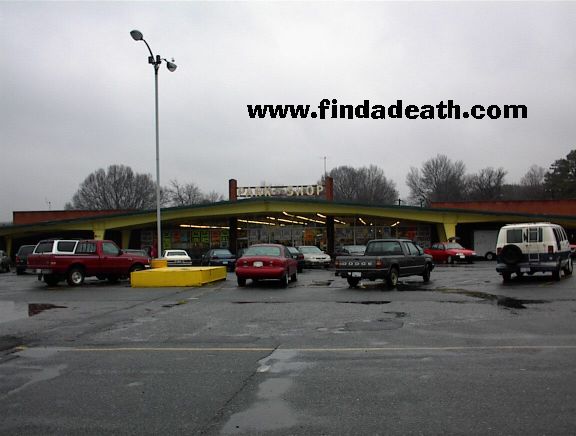 They fit in to normal city life, attending the Purcell United Methodist Church, and eventually renting a home that the church owned. 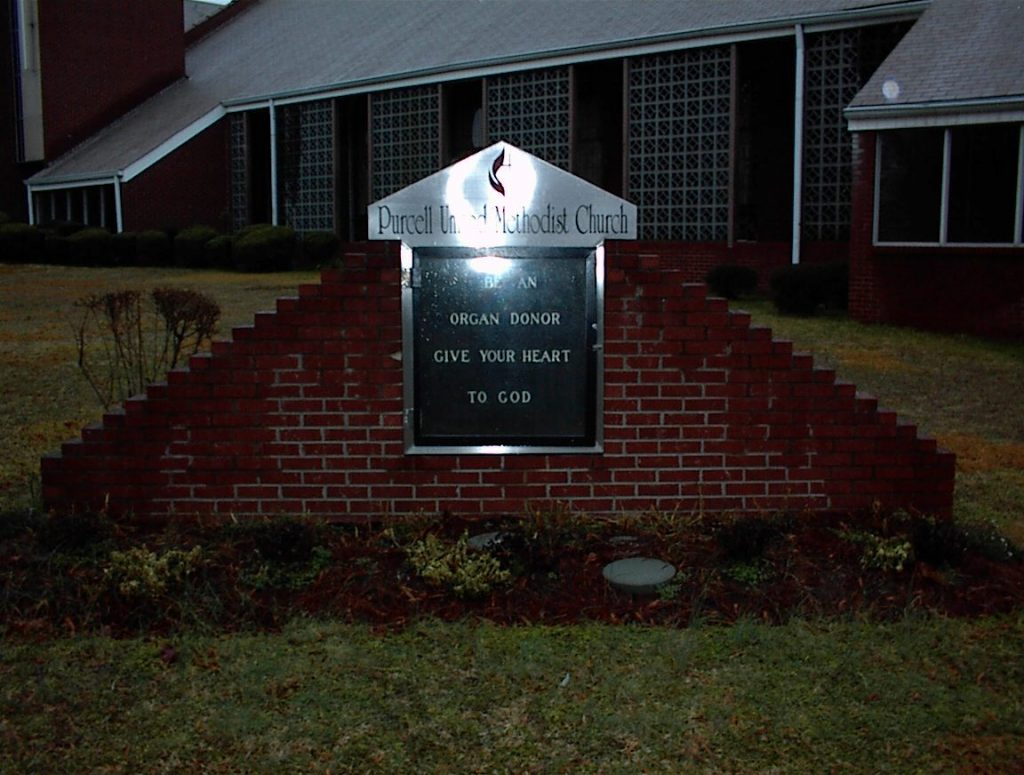 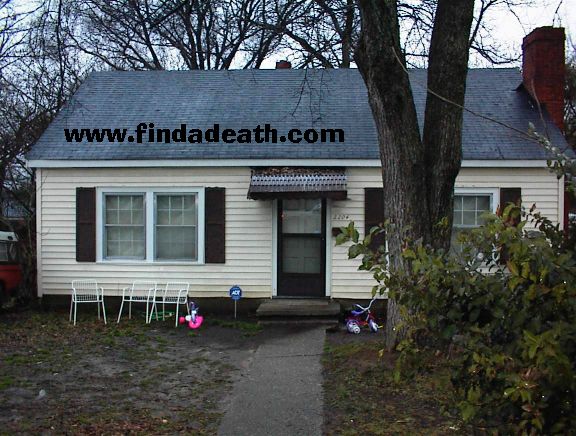 In December of 1968 – Violet caught influenza, and just as she got better, Daisy got it. They were gone from work for a couple of weeks. Their boss would call every day to check on them. If they didn’t want to be disturbed, they would take the phone off the hook. One day the phone rang – and rang – and nobody answered. It was January 4th of 1969 when their boss and his wife finally went over to the house and banged on the door, and got no answer. They called the police, who pried the door open. 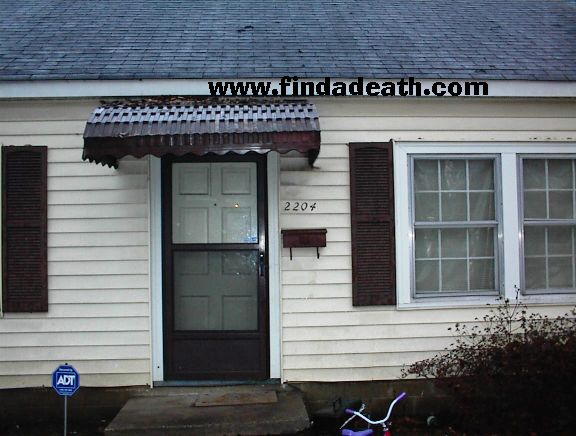 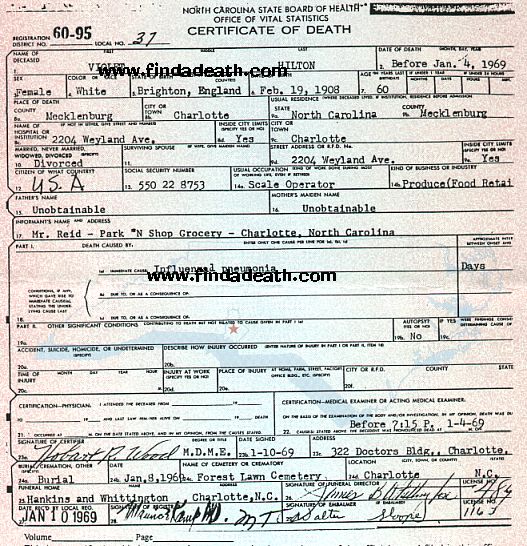 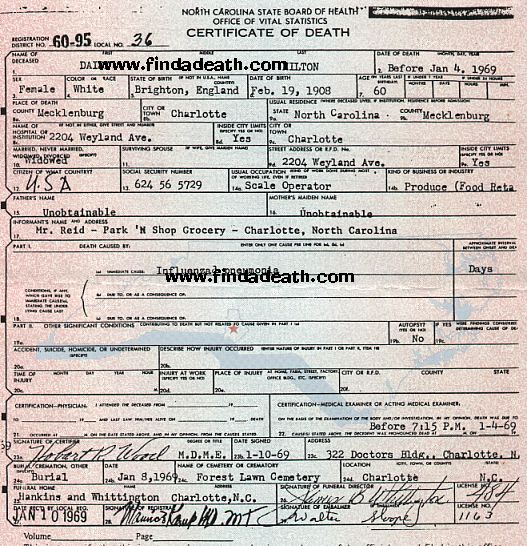 The twins were taken to the Hankins and Whittington Funeral Home, for the funeral. 23 flower arrangements were sent by friends (and family?). 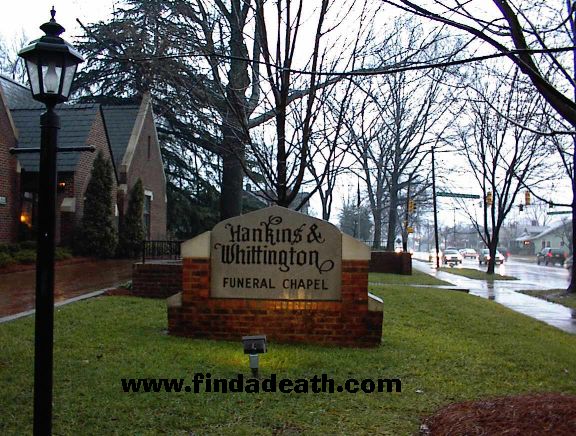 Violet and Daisy are buried in Forest Lawn Cemetery, off Freedom Drive, in Charlotte. They are buried with a Vietnam vet named Troy Thompson. 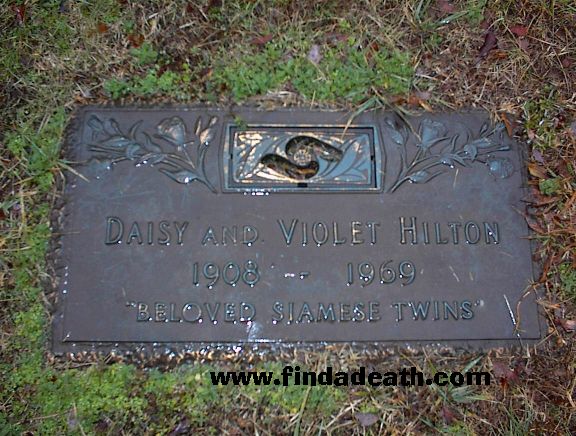 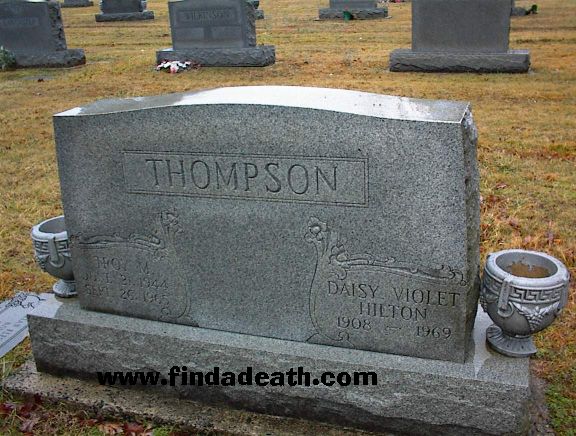 Findadeath sleuth/friend Beca just sent me this information: “Since the Hilton sisters were adopted while very young by the woman who (with the help of her daughter) exploited them, they never knew any biological family, and when they were able to gain independence they had no further contact with their “adoptive” family, so to my knowledge they had no family in the US. The sisters were so poor when they died, they didn’t have enough for a plot. A lady who befriended the sisters donated the plot. It’s Troy Thompson who is this lady’s son. This story has been told to me by 3 people.”  How great!  Thanks so much Beca.

Their boss, Charles Reid, was given the task of cleaning out their rented home. He found an unusual amount of pocketbooks, stuffed in every dresser drawer. Each one had three or four dollars in it. He also found many photos and newspaper clippings from the twin’s show business days, but they were all hidden from view. Not a single photograph or poster adorned their home.

In life, the two had many romances between them. It was difficult to get a marriage license from almost any state, due to the issue of them being co-joined – considering any union with them, bigamy. Finally, they found a loophole in Texas, and in 1936, Violet married a man there, named James Moore. Daisy married a man named Buddy Sawyer, in 1941. I don’t know much about the outcome of these relationships or any others of theirs, to be honest. I do know that at the end of their lives, Violet was officially listed as divorced, and Daisy was listed as widowed.

In your article on the Hilton Sisters you mention that Daisy Hilton is listed as widowed, but I can assure you it was not by Buddy Sawyer, who is my great uncle (once removed, or something like that) who is alive and well in Elmira, NY.

The sister’s story is poignant and beautiful.  I wish the musical, Side Show, had done better business, it’s a story that needs to be told an heard.  It’s so romantic.  It’s a shame that our only contemporary version of the Side Show is tabloid and talk television.

Thanks for the update on Buddy, Jason!

In 1997, there was a Broadway musical made – based on Violet and Daisy. It was called Side Show. It closed after a three month run. The play got favorable notices, but failed to catch on. At the time, it was the third biggest flop in Broadway history, losing its investors $7 million. It closed on January 3rd, 1997 – one day before the 27th anniversary of the discovery of their body. 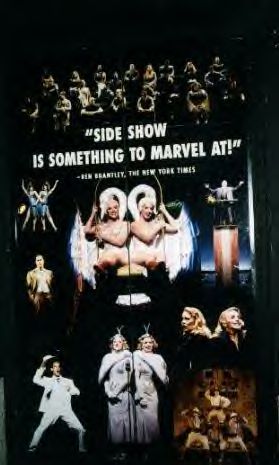 3 thoughts on “Violet and Daisy Hilton”