Virginia Rappe (pronounced “Rap-pay”) sought fame in life, but instead found infamy in her scandalous, early demise. Her life and death have inspired so many conspiracy theories and rumors that it is often difficult to separate the truth from fiction.

Born in Chicago in 1891, to Mabel Rapp, a chorus girl and rumored prostitute, Virginia never knew the identity of her father. Virginia later added the ‘e’ to the end of her name to make it sound more sophisticated. Her mother died when Virginia was 11 years old, leaving her grandmother as her guardian. There is little hard evidence to substantiate what her life was like during these years, but it was rumored that she may have had as many as five abortions and given birth to an illegitimate daughter who was placed in a foster home. Virginia’s grandmother died a few years later, leaving her completely alone. In 1907 she began working as a professional model in numerous live fashion shows and a variety of advertisements. 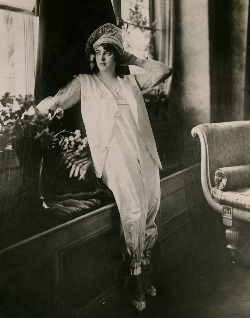 Her greatest fame came when she was chosen as the cover girl for the sheet music to the popular song “Let Me Call You Sweetheart.” She showed great ambition by launching her own clothing label in 1914. She designed and sold the clothes, relocating to San Francisco in the process. It was there that she fell in love with dress designer Robert Moscovitz. They were engaged, but their relationship was cut short when he was tragically killed in a streetcar accident.

In 1916, Virginia moved to Hollywood. She appeared in four Keystone comedy shorts by actor/director/producer Henry Lehrman. It is possible that she could have been in more films, but much of Lehrman’s work has been lost. Virginia and Lehrman began a romantic relationship and moved in together, which was a shocking choice for an unmarried couple at the time. 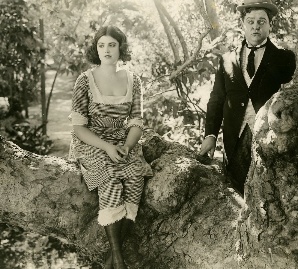 In 1918 Virginia was voted the “Best Dressed Girl in Pictures,” although “Best Undressed” may have been more appropriate. She was known in Hollywood circles for removing her clothes when drunk. She had a reputation for being very wild and for being a woman of “easy virtue.” It is fair to point out though that wild partying and drunken antics were hardly new or shocking in Hollywood society of the time. 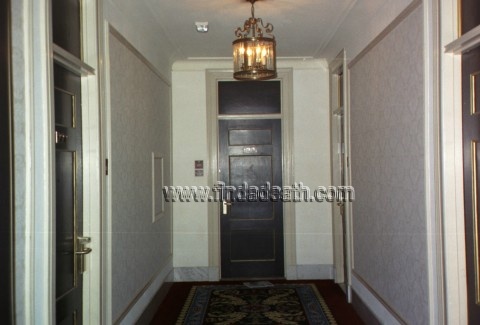 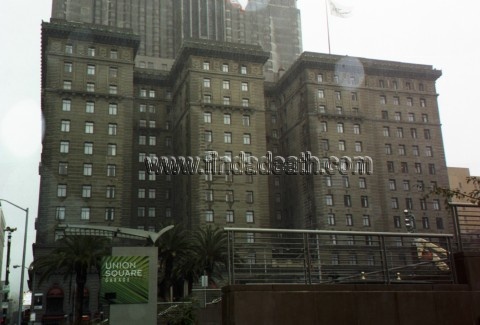 He invited some friends to join him for the weekend. Soon their suite was the site of a party. Virginia Rappe happened to be in town and was invited to join the festivities. She brought along a newly acquired friend, Maude “Madam Black” Delmont, who was a known madam and extortionist.

As the gin flowed and the music played, a drama played out that was likely far more compelling than anything ever committed to film. What happened next will never be fully known despite over 80 years of speculation. All of the participants and witnesses had been drinking heavily, which was illegal in the era of Prohibition, and many of them feared the damage that telling the truth might do to their own lives and careers. The known facts are that Virginia got very drunk and suddenly started ripping off her clothing and screaming. Arbuckle alerted the hotel and called a doctor. He also left money for her medical treatment and got her a separate room. The party resumed and everyone assumed Virginia would be fine under a doctor’s care. Tragically, they were wrong.

Three days after the party  Virginia died of a ruptured bladder and secondary peritonitis at the Wakefield Hospital (now a place for homeless families).

It has been reported that her organs were removed illegally postmortem and secretly destroyed. Maude Delmont accused Arbuckle of raping and murdering Virginia. He was arrested and charged with murder, although it was eventually reduced to manslaughter. However, Delmont’s story changed constantly and the district attorney realized that she was an unreliable witness. She never testified at any of the trials, in spite of being the chief accuser. Rumors beget more rumors and lurid details were manufactured daily by the press. It was rumored that Virginia was raped with a champagne bottle and that she died of a botched abortion. It was also reported that she had venereal disease and had even worked as a prostitute. The rumors however, are exactly that. The truth is impossible to know. 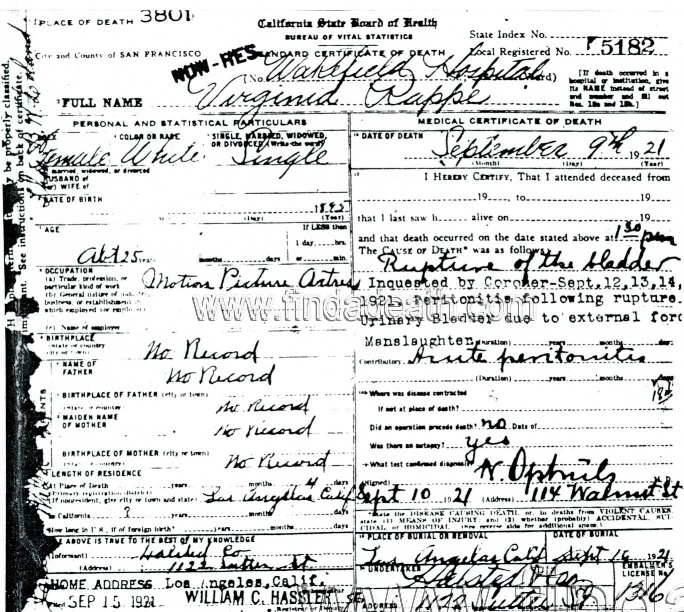 Arbuckle was put through three trials and a media circus before being acquitted of all charges. At the third trial, the jury composed a formal apology stating, “Acquittal is not enough for Roscoe Arbuckle. We feel that a great injustice has been done him… there was not the slightest proof adduced to connect him in any way with the commission of a crime.”

Unfortunately it was too late. Arbuckle’s life and career were ruined. He was banned from the screen and spent the rest of his life trying rebuild all that he had lost. Sadly, time was not on his side. He died in his sleep of a massive heart attack just as he was on the brink of making a screen comeback in 1933. He was 46 years old. His ashes were scattered at sea. 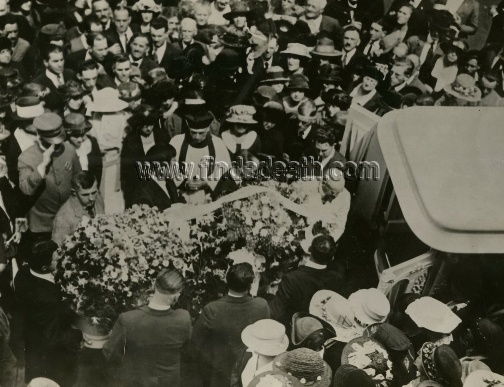 Virginia Rappe was brought back to Los Angeles and interred at Hollywood Forever, then Hollywood Memorial Park Cemetery. 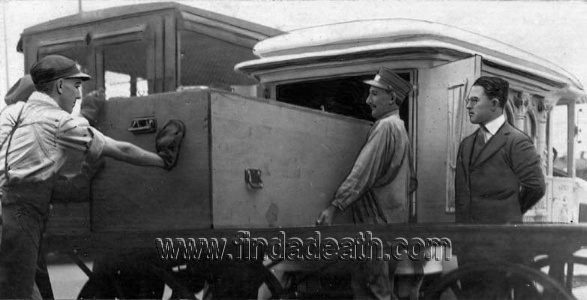 Her fiancé Henry Lehrman died in 1946 and is buried next to her. 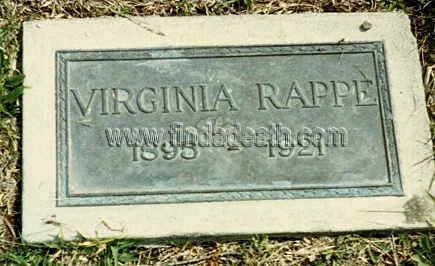 For several years people have reported hearing the sounds of weeping while at Virginia Rappe’s grave. Footage of Virginia can be seen in the documentary Hollywood: Single Beds, Double Standards produced by Kevin Brownlow.

A few years back a fragment of film was discovered that featured Virginia Rappe, Olive Thomas and Edna Purviance all sitting on a wall laughing and blowing kisses. It was a brief moment frozen in time for three women whose lives would all be touched by scandal and tragedy within a very short time.

In September 1920, Olive Thomas would die under mysterious circumstances in Paris France after drinking bi-chloride of mercury. She was 25 years old. Virginia Rappe died in September 1921 at age 26, although her birth year is disputed to be 1891, which would have made her age 30. Edna Purviance was living next door to director William Desmond Taylor, who was murdered in February 1922. 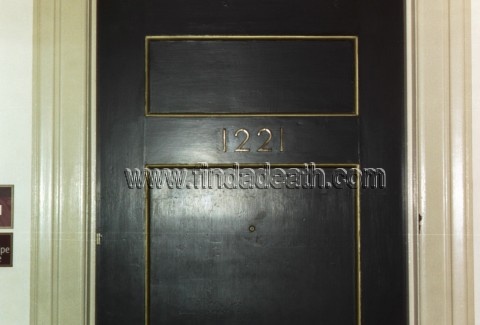 In 1950 famed entertainer Al Jolson (The Jazz Singer) was staying at the hotel and playing cards with friends when he had a massive heart attack and died in Room 1221. Reportedly his last words were “Boys, I’m going.” He was 64 years old. 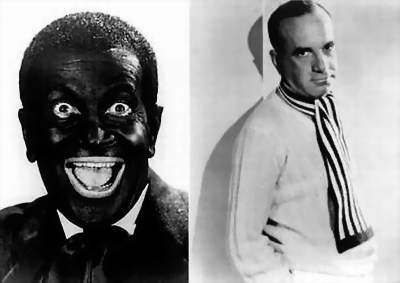 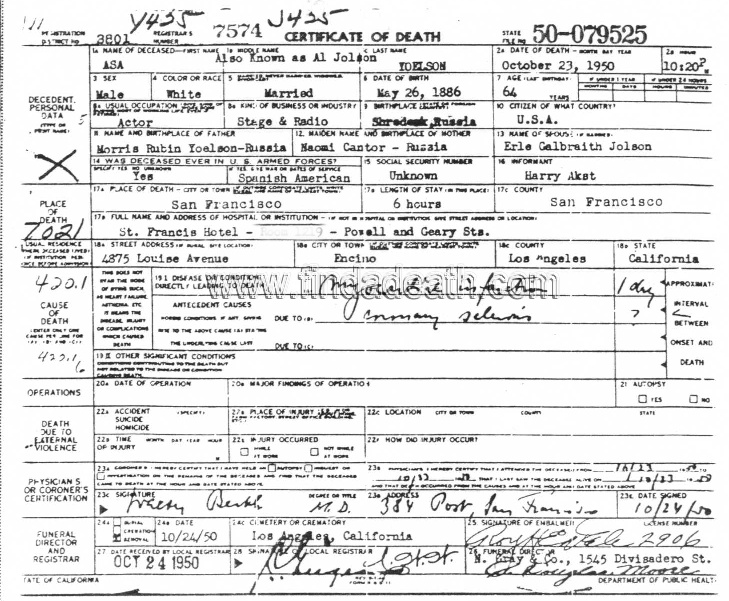 This story was compiled by Hollywood Historian Karie Bible.  When in Hollywood – take Karie’s tour of Hollywood Cemetery.  You’ll love the tour – and the cemetery.

Special thanks to Steve Goldstein for the snaps of the hotel, and Joe Walker – who’s research I continually am amazed by.  Thank you.

One thought on “Virginia Rappe”