“If I let my hair go like that you’d never let me hear the end of it.” 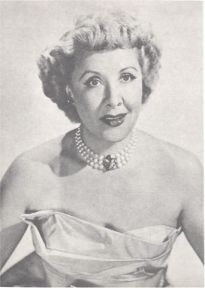 “Honeybunch, if the rest of you looked like that I wouldn’t care if you were bald.” 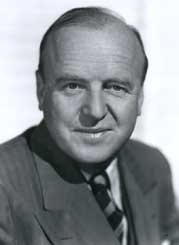 On screen, their chemistry as Fred and Ethel Mertz was fantastic. Off screen, they couldn’t bear each other. Trading insults constantly. I think it’s partly what drove Vivian to mental illness. That and working for Lucy. Lucy’s “professionalism” is legendary, and you only have to look at her two kids, to see there was some serious damage done. Lucy and Vivian were very good friends for the most part, but their relationship had its ups and downs. I remember one story I read somewhere that while Lucy was pregnant, she took Vivian’s dressing room, which was closer to the stage. Lucy also had people helping her with costume changes. Meanwhile, Vivian had to crawl across props and cables, change by herself, and get back to the stage. One time, she missed her cue. “You’re late,” said Lucy. “I’d tell you to go fuck yourself, but Desi’s already done that,” was apparently her response.

Both Frawley and Vance were veterans of the stage by the time they were cast in their roles as the Ricardo’s landlords.

After I Love Lucy went off the air, Frawley continued to work quite a bit, landing a role in the Fred McMurray show My Three Sons, as Bub the housekeeper. He lived in a building on Rossmore, 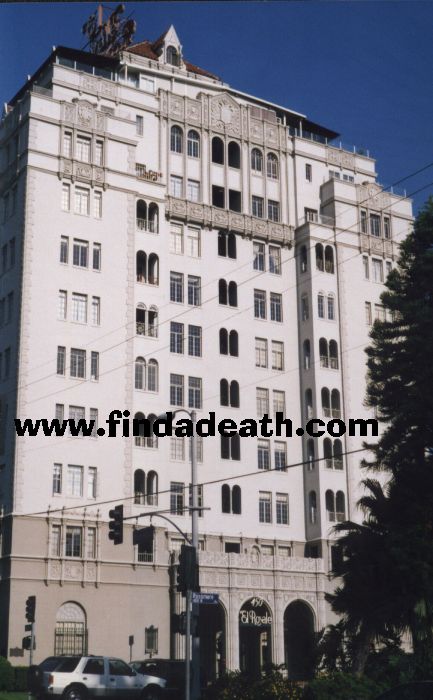 almost next door to Mae West, called the El Royale. Here is the front entrance. 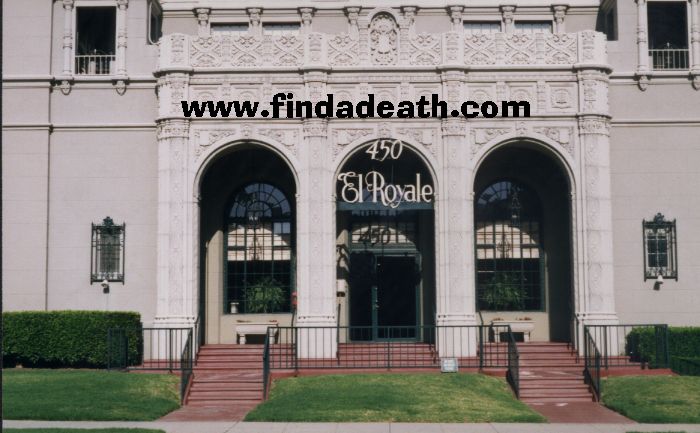 On March 3rd, 1966, Frawley went to see a film with his “male nurse.” Don’t really know why he needed a male nurse to go with him to the movies, but there you go. As best as I can figure, he saw “Inside Daisy Clover”.  They were walking down Hollywood Boulevard, when Fred hit the pavement, just on this corner.

The nurse carried Frawley to the lobby of the Knickerbocker Hotel, 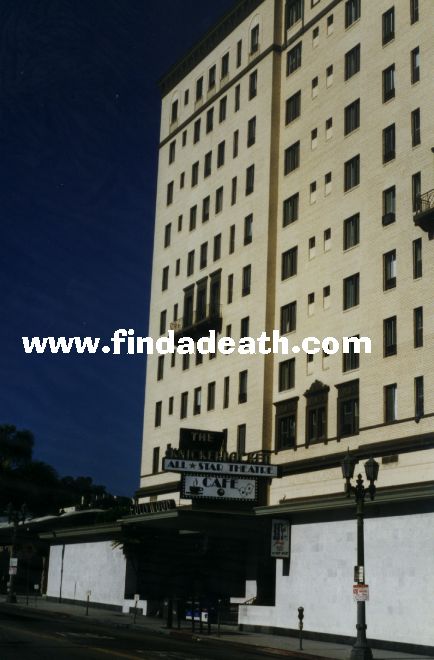 where attempts to resuscitate him, failed. Frawley’s body was DOA at the Hollywood Receiving Hospital, on nearby Wilcox. The hospital is now gone, and the Hollywood Police Station is in its place. Frawley was 79 years old. William Demerest, as Uncle Charlie, replaced him on My Three Sons.

Interesting fact discovered by Mark Langlois:  Though associated with Al Jolson, who performed the song very successfully, “My Mammy” was performed first by William Frawley as a vaudeville-style act during 1918. Jolson heard the song and performed it for the Broadway show Sinbad. Jolson recorded this song twice and performed it in his 3 films : The Jazz Singer (1927), The Singing Fool (1928) and Rose of Washington Square (1939). The group, The Happenings, revived the song during 1967 with a recording that scored the top 20.

September 2002, Findadeath.com friend E.J. Fleming adds this:  Interesting coincidence.  When he died he was indeed living over on Rossmore, but for 30+ years prior to that, he had shared a large apartment with his sister at the Knickerbocker.  When he had his fatal heart attack, he happened to be walking in front of the Knickerbocker.  They carried him in to the lobby, where he died on a couch.  He had lived on Rossmore for only a few months when he died.  Went ‘home’ to die it seems. 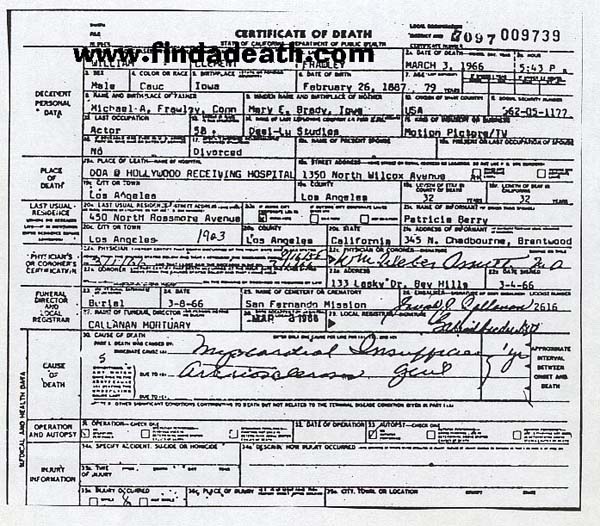 Upon hearing of his death, Desi Arnaz took out a full page ad in the Hollywood Reporter, that said, “Buenos Noches, Amigo!” Lucy herself issued a statement, “I’ve lost one of my dearest friends and show business has lost one of the greatest character actors of all time. Those of us who knew him and loved him will miss him.” I doubt this is true, but Vivian Vance was credited as saying, “Champagne for everyone!” when she heard the news.

He was buried 5 days later, in the San Fernando Mission Cemetery. 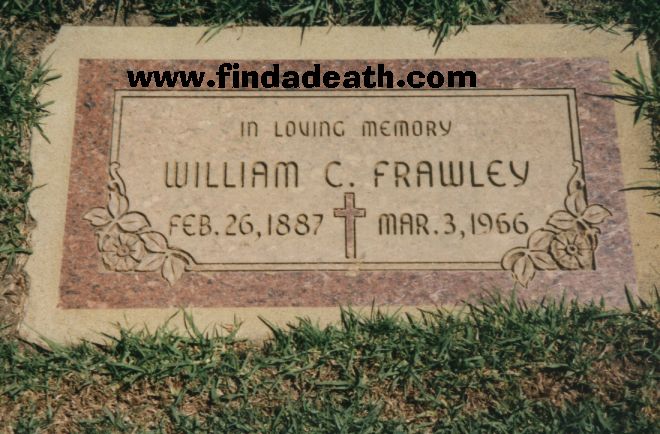 Trivia: Frawley was a drunk. Apparently Desi Arnaz knew this, and had it added in his contract that if he ever showed up drunk, he would be terminated immediately. It was also in Frawley’s contract that he be let go to attend baseball games.

You are correct in that Mr. Frawley was a drunk. Then again, so was Desi, among other things. The contract stipulations you refer to were: Should drinking ever have an “adverse” effect on production, Mr. Frawley faced possible termination of employment. 2nd, his contract did stipulate time off for baseball games, however, the only games this applied to were The Yankees; more specific, if they made the World Series.
More: Lucy apparently wanted Gale Gordon for the part, but he was unavailable.

Vivian Vance was almost thirty years younger than Frawley. She originally thought that William was being cast as her father, not her husband. The Mertzs were only going to be incidental characters, but much to Lucy’s annoyance, they gained popularity and were made into full-fledged regulars. I don’t know if this is true, but there are those who say that Lucy stipulated in her contract, that Vivian remain 20 pounds overweight.

After I Love Lucy, Vivian continued to work, and was asked back to do more Lucy incarnations. Eventually she retired to Belvedere, California, where she worked on raising awareness for mental illness. Vivian suffered from depression, and had several nervous breakdowns in her life.

My buddy Steve Smith was kind enough to go out of his way and snap some pictures of the house Vivian died in. It was on Beach Road. 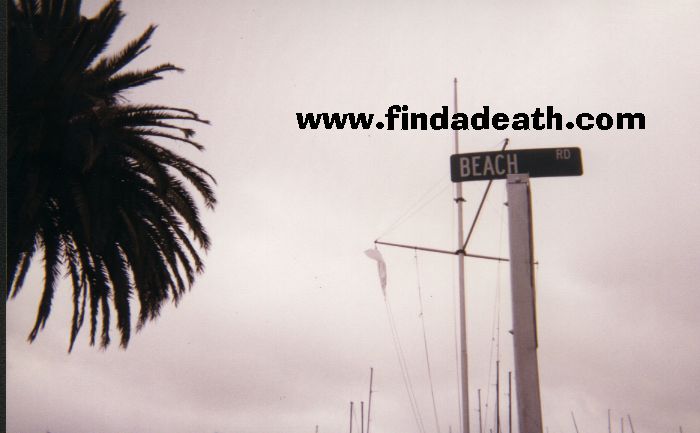 Here is the front and her mailbox. 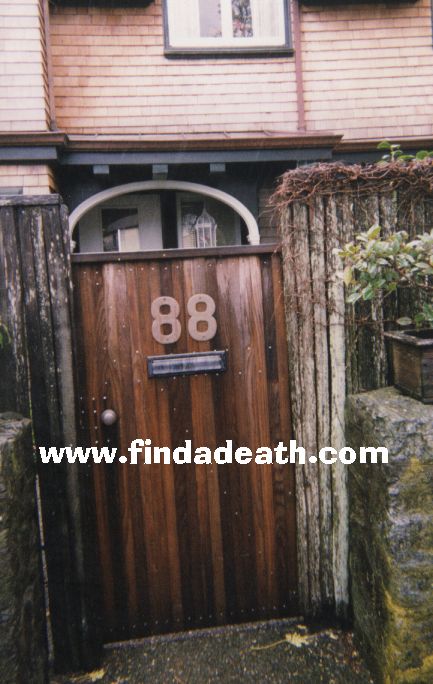 Thanks so much, Steve.  You can actually see where Lucy probably threw a cigarette out, before visiting ol Viv. 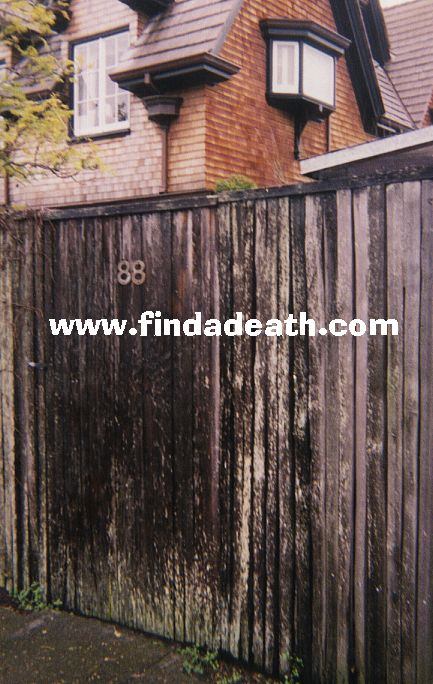 By 1979, Vance had suffered a stroke, and was in failing health. Mary Wickes, a close friend of Vivian and Lucy’s, was in a play in the area. She and Lucy visited Vivian one last time, in the summer of 1979. They got on like the good times in the old days. On their way back, Mary Wickes said she and Lucy cried the entire way.

On August 17th, Vivian passed away. She had bone cancer. She was 64 years old. 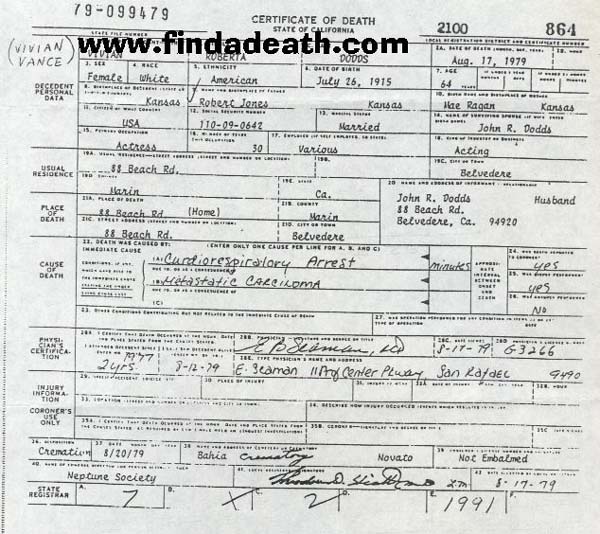 She was cremated, and scattered in the ocean.

Trivia: Just one. A Lucy bit I found terrific, in a book called Desilu: The Story of Lucille Ball and Desi Arnaz, by Coyne Steven Sanders and Tom Gilbert.

Kay Ballard talks about a trip to Palm Springs to visit Lucy: “Lucy and I were riding bikes when a dog came out of the woods, foaming at the mouth. She just looked at the dog and yelled, “GET THE FUCK OUT OF HERE!” The dog ran back into the woods. I turned to her and said, “That is why you are queen of the world and I am nothing.”