Vivien Leigh was married to Sir Laurence Olivier for twenty years. They divorced in 1960. Leigh, a diagnosed manic depressive, contracted tuberculosis in 1945. Strange, because this disease was all but obliterated in this century. 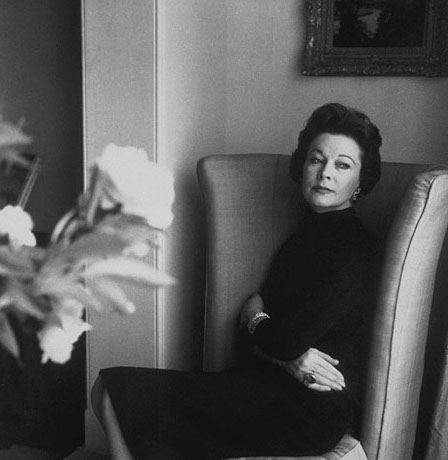 According to several published sources (grain of salt) Vivien was mentally troubled.  These days she would have been diagnosed bi-polar, but back then she would probably have been institutionalized for her irrational behavior.  I’ve heard the stories of casual (like very very casual) sexual conquests.  Taxi drivers, strangers and the occasional scissor sister.

In another form of fiery expressionism, in 1957 she was ejected from the House of Lords when she shouted from the galleries protesting the demolition of the 200-year-old St. James’ Theater in London. 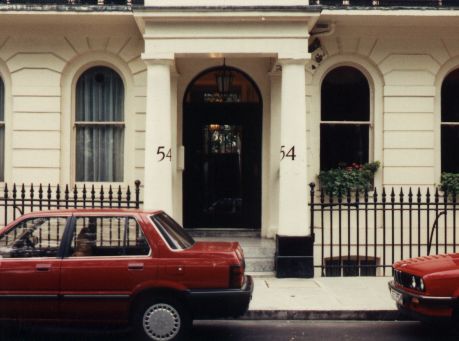 Findadeath friend Dominic Druce provides:  “Vivien returned to Eaton Sq from [her country home] Tickerage on 31 May 1967 to prepare for rehearsals for A Delicate Balance (Albee) with Michael Redgrave as co-star. On getting into the hall she felt faint and breathless and went to bed where she began coughing up blood. Her doctor, Doctor Linnet was sent for and took an X-ray in her bedroom  (how?? aren’t those machines big enough now let alone 1967?) as she refused to go to a hospital, and found a big black hole on her lung. Her comment on her medicine was, ‘Tastes perfectly awful!’ She was to have few visitors, no alcohol, no cigarettes  (it is surprising she did not give up there and then).

This discipline however lasted a short time. Her last “companion”- actor Jack Merivale – was performing nightly in Brighton (in a PLAY) and knowing she was alone, friends came round to her room and soon the scene resembled a cocktail party. Redgrave came round to rehearse lines, the room (rose chintz on walls, four-post bed and cushions AND en-suite bathroom) filled with flowers. She began smoking again, more concerned that Olivier was in St Thomas’s Hospital suffering from prostate cancer.

July 2 – Noel Coward visited Vivien first, then Olivier.  He wrote in his diary, “Vivien was sitting in bed looking pale but lovely, and smoking, which she shouldn’t have been doing.  She was gay and enchanting as she always is.”

From then she would spend an hour a day out of bed, mostly watering plants and arranging flowers.

July 6 – Stanley Hall, her friend and wigmaker, called in the evening to keep her company and to discuss the grey-streaked wigs she had requested for the Albee play.  He brought a 16mm projector with him which he set up in her bedroom, and they watched a documentary called, “Rembrandt’s Paintings,” and a Merchant-Ivory film called “Shakespeare Wallah.

July 7 – she watched the Wimbledon Men’s tennis finals on television with boyfriend Jack Merivale, before he went out to do his evening show.  She snuggled up in bed with a pile of recent biographies, her cat PooPoo Jones, and signed letters her secretary had typed for her that day.  Merivale phoned her from his dressing room and she seemed tired.  She took her sedatives and fell asleep. 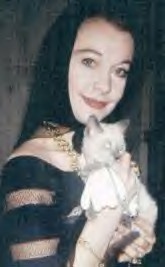 Merivale returned at 11 p.m. and looked in on her, and she was asleep, PooPoo beside her.  He went to the kitchen to heat up some soup.  At 11:30 he looked in again and found her lying on the floor, half way to the bathroom, a drinking tumbler beside her.

Her lungs filled with fluid and she would have felt choked, and went to get a glass of water.  She was still warm, and he gave her the kiss of life (mouth to mouth) to no avail, before lifted her onto the bed.

July 8th – Merivale rang St. Thomas’s Hospital to break the news to Olivier, who immediately discharged himself and was driven to Eaton Square.  Rumors were already circulating and the press had begun to gather, so he had to enter the flat through a side door (which we should have a photograph of soon.).  Olivier was left alone with her and wrote later that he, “stood and prayed for forgiveness for all the evils that sprung up between us.” (Or one that didn’t.) 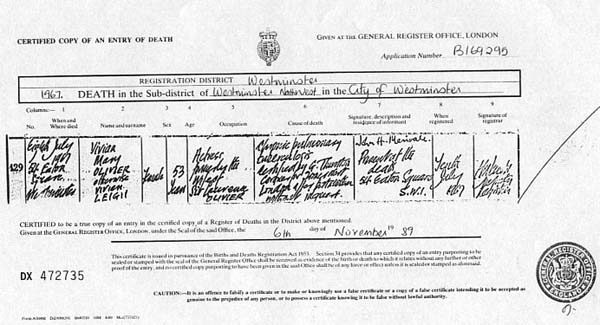 As a sign of respect, on July 8th at 10 p.m., every theatre in the West End turned out their exterior lights for one hour. The theatre district mourned her passing.

There was a requiem mass at St. Mary’s, Cadogan Street on the 12th of July, attended by about a dozen of Vivien’s family and close friends. John Geilgud spoke the eulogy.

Although a Catholic, Vivien opted for cremation. The deed was done at Golders Green Crematorium, in London. 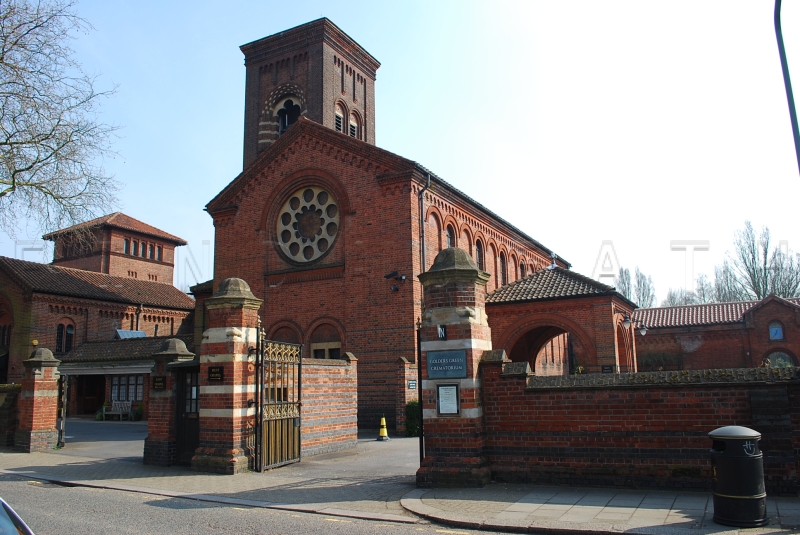 In October, her ashes were scattered on the water of the old mill pond at Tickerage, her country home. The home was put on the market, and sold almost immediately. 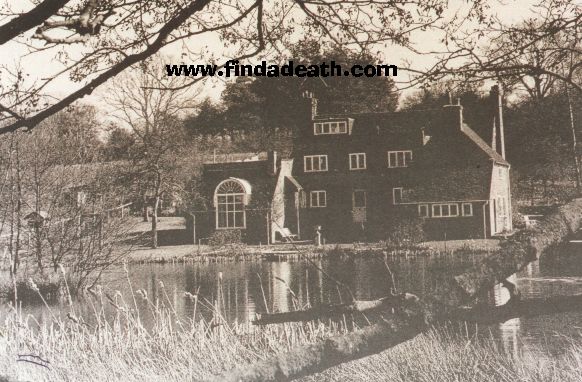 A Blue Plaque historic marker has been erected on her home in Eaton Square. 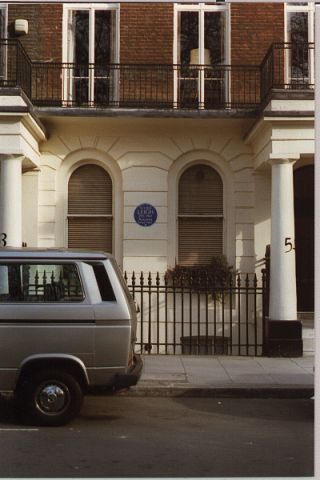 More info from Dominic – her estate totaled £ 252,681 gross, £ 152,573 after death taxes.  That’s several million today.  She had shrewdly invested in art and furniture.  Apart from gifts to friends, the estate went to her daughter, Suzanne, Mrs. Robin Farrington, by her first marriage to Leigh Holman.

Trivia: Marilyn Monroe in 1956, made continuous headlines in London, when filming, “The Prince and the Showgirl,” with Sir Laurence Olivier, Vivien’s husband. As production started, Vivien announced to the press that, after 16 years of marriage, and at the age of 42, she was pregnant. With this news, she replaced Marilyn on the headlines of every paper. Certainly wrongly accused of trying to outdo Marilyn for attention, she miscarried a few weeks later.

My friend Jayne Osborne saw this in the windah and just had to take a pikcha.  Thanks! 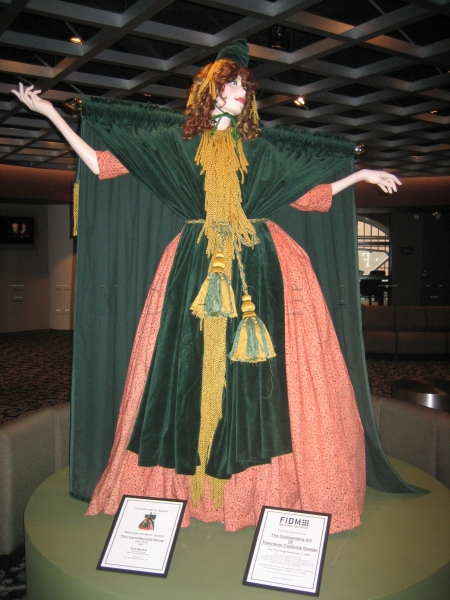 In February 2007, UK Death Hags and myself met up for several pints and a pose in front of Vivien’s home in Eaton Sq. 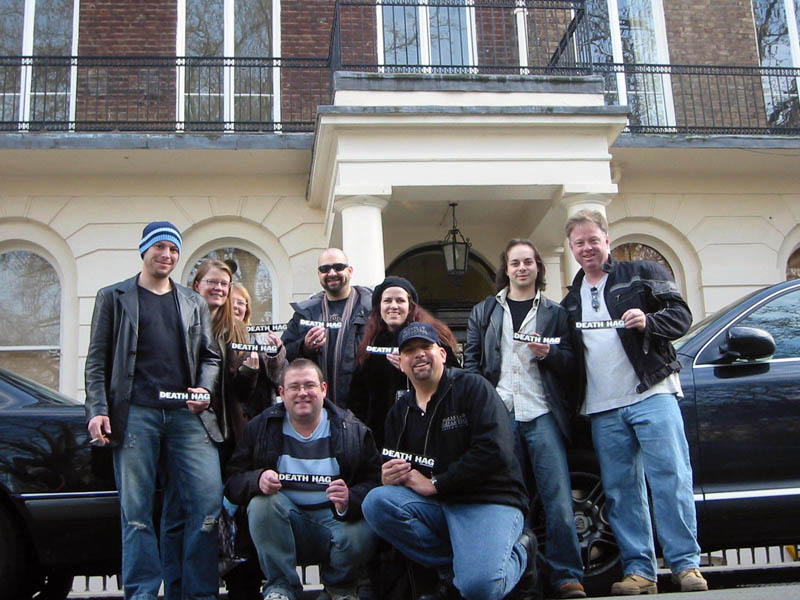 Pass the mint julep, I have the vapors.