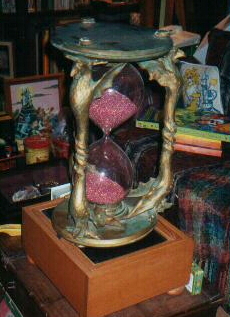 My friend Barry Patraw from the Chicago area, sent in this photograph.  If you don’t recognize it, well, #1 – you ain’t gay, and #2 – you’ve never seen The Wizard of Oz.  This is the hourglass that belonged to the Wicked Witch of the West.   Allegedly, this was bought by a collector for $145,000 – right out from under the non existing nose (its true – he only has 2 holes where his nose should be)  of Michael Jackson.  Fantastic.  Thanks Barry!