The folks in the neighborhood knew it took more than a fool to break into lily-white Hollywood.
— Etta James
You look like a blackout in a blackout.
— Bob Hope (The Ghost Breakers)

Willie Best was among the busiest black actors of the 1930s and 1940s. A Mississippi native, Best reportedly arrived in Hollywood as chauffeur to a vacationing couple, and was later discovered in a stage show by talent scouts.

Like his showbiz peer, Stepin Fetchit, Willie Best was stuck playing racial stereotype roles and was credited in many films only by a demeaning nickname. Willie Best was introduced to audiences as Sleep ‘n’ Eat – a cowardly, shiftless fool.

Studio press releases of the 1930s made outrageous claims that not only did Best enjoy humiliating himself in “darkie” roles, but that the only compensation he wanted for his screen work was three square meals a day and a warm place to sleep.

In 1930, Los Angeles was booming and film studios had begun their golden age of sound motion pictures. While residents could take streetcars to just about anywhere in the L.A. sprawl, the city was still mostly segregated. Black citizens gravitated towards bustling Central Avenue and its many black-owned shops, restaurants, nightclubs, and the posh Hotel Dunbar.

The 1930 US Census showed that out of 38,894 blacks living in L.A., only 213 listed themselves as film actors. That year, Willie Best (credited as Sleep ‘n’ Eat) appeared in his first big film: Feet First (opposite star Harold Lloyd) as a dim-witted janitor named “Charcoal” (in the 1960s re-release, Lloyd overdubbed his own voice to change the name to “Charlie”).

Willie Best was eventually billed in films under his own name but his screen roles stayed the same, i.e.: train porter, janitor, valet, elevator operator, men’s room attendant, etc. Regarding his degrading scenes, Best told a 1934 interviewer: “Sometimes I tell the director and he cuts out the real bad parts, But what’s an actor going to do? Either you do it or get out.”

Willie Best lived a vastly different life than his on-screen persona. He reportedly was a sharp dressed man whose fame afforded him evenings on Central Avenue with the finest ladies (both black and white) and the finest dope. On May 24, 1951, Willie Best was taken to L.A.’s Lincoln Heights Jail on a narcotics bust.

When his film career fizzled out by the early 1950s, Hal Roach kept Best busy on several TV series and he became best known as Charlie – the elevator operator on My Little Margie (1953-55) starring Gale Storm. Ms. Storm shared this statement about her former co-star: “I loved Willie Best with all my heart…and so did everyone who worked with him. Not only was he a joy to be with, but as an actor he was an ultimate professional, always knew his lines and a director’s delight. 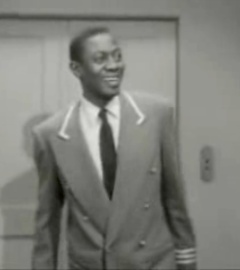 By the late 1950s, Best found himself vilified by a new generation of civil rights activists and unwelcome by image conscious studios, and he withdrew from show business. A Los Angeles resident for over 3 decades, Best was living on this block when he became terminally ill from cancer.  It must have been stunning back in the day, look at this beautiful gem of a house on the corner.

Willie Best’s funeral was held March 5, 1962 at Pierce Brothers Hollywood Chapel on Santa Monica Blvd, and he was buried at Valhalla Memorial Park in North Hollywood. 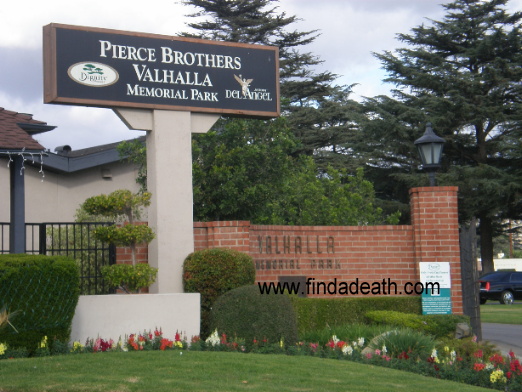 Two years after his death, Willie Best was depicted as a symbol of martyrdom in African-American poet Amiri Baraka’s A Poem for Willie Best. 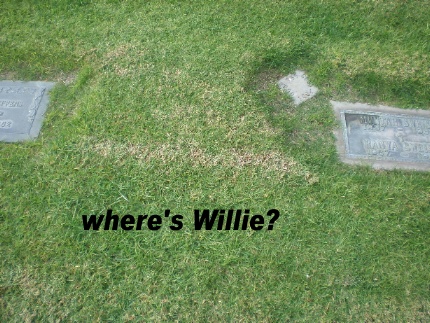 until admiring fans and Death Hags paid for this marker in 2009. 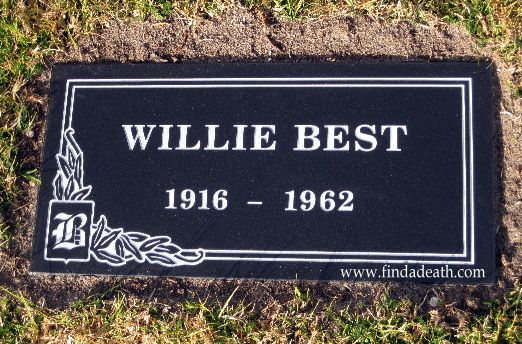 At Valhalla Cemetery, Willie Best is buried near other such pioneering black actors as: Madame Sul-Te-Wan, Mantan Moreland, and Sam McDaniel.