December 21, 2002, a very good friend of Findadeath.com who wishes to remain anonymous, sends us this pic of the car, and, believe it or not, the Divine Miss Z. in the hospital. Thanks so much buddy. 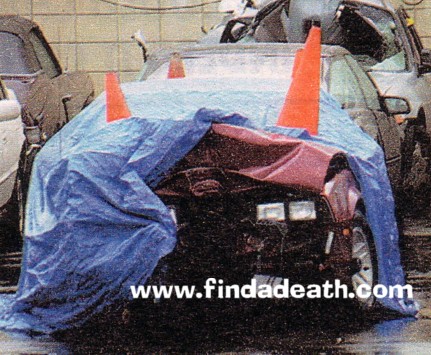 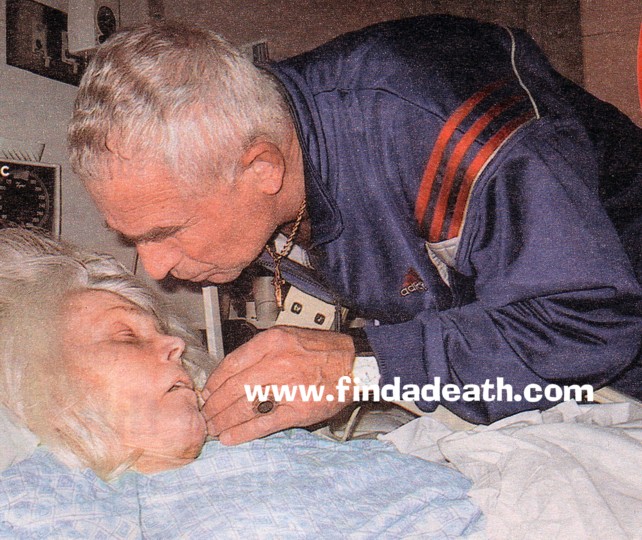 Zsa Zsa Gabor is filing a $65 million lawsuit against her hairdresser, who was driving her in Hollywood last week when he lost control and crashed the car into a lamppost.

The 85-year-old actress, who was not wearing a seat belt, broke her arm and needed stitches to her head, hands, arms and legs – Frederic von Anhalt – Gabor’s eighth husband – told The New York Post.

Initial reports said the former Miss Hungary was taken to hospital in a coma, but von Anhalt denied her condition had been that serious.

He said Gabor would stay in hospital this week and would undergo surgery for her broken arm.

The hairdresser, whose name has not been released, was not admitted to hospital. He had been wearing a seat belt.

Zsa Zsa Gabor remained in serious condition today at Cedars-Sinai Medical Center, where she is being treated for injuries suffered in a car crash in West Hollywood on Wednesday.

Hospital spokesperson Leslie Porras declined to release further details about the actress’s condition or comment on a possible release date.

The crash happened about 4:30 p.m. Wednesday, November 27 at Sweetzer Avenue and Sunset Boulevard. 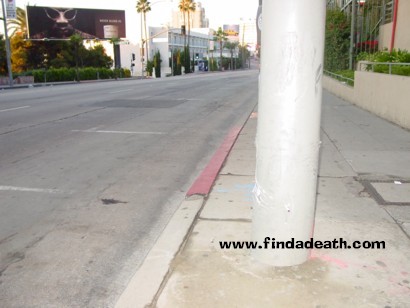 The 84-year-old Gabor was a passenger in a red Corvette that jumped a curb and crashed into a street pole. 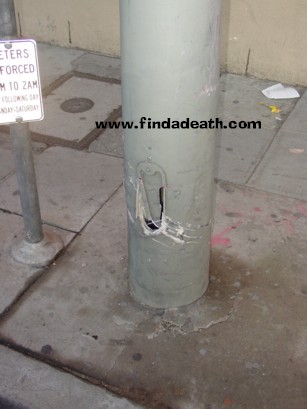 The car struck the post here, and would you look at what fell off into my hand? 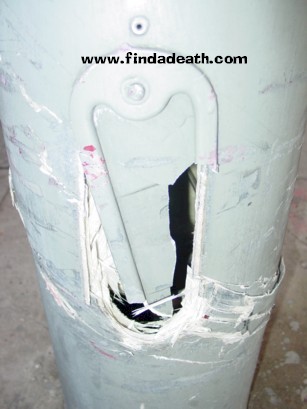 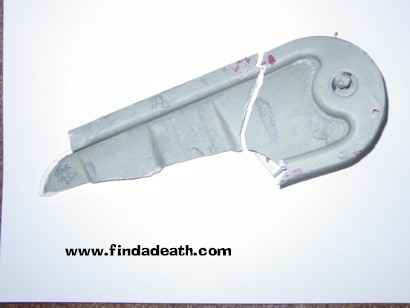 The day after the crash, Gabor’s daughter, Constance Francesca Hilton, said her mother suffered a broken arm in the accident. According to another report, Gabor suffered multiple fractures and required stitches to close cuts on her head, hands, arms and legs.

Hilton, daughter of the hotel magnate who was one of Gabor’s eight husbands, said her mother did not suffer a serious head injury. She acknowledged that Gabor was on a respirator for a time, and said that she did suffer some “trauma,” as is typical for any serious accident victim.

Hilton denied a police report that Gabor wasn’t wearing a seat belt when the Corvette struck the street pole.

The driver, reportedly Gabor’s hairstylist, was not seriously hurt in the crash.  Boy, is she gonna be pissed.

This just in, January 2003, from Findadeath.com friend Dirk Foster:

You said “The crash happened about 4:30 p.m. Wednesday November 27 at
Sweetzer Avenue and Sunset Boulevard. The 84-year-old Gabor was a passenger
in a red Corvette that jumped a curb and crashed into a street pole.” But
the picture listed is not a corvette. That looks like a nissan/datsun or
toyota maybe. The car shown is a front wheel drive with 4 head lights. The
corvette only has 2 head lights.

Countless people have been sending this in:

Hmmm…  that pic of the Corvette that Zsa Zsa supposedly crashed in sure looks like it has some Camaro Z28 wheels on it.  I don’t think anybody in or around 90210 would be tacky enough to do that but who knows. Thought only people on the East side of Detroit did that. The front fender itself looks like a Camaro as well but I could be wrong.

I’d question the source of that picture.