Don’t you love the sentiment on the photograph that she gave me? I swear it was unprompted. Just shows you that the old girl was up for a joke!

Adriana Caselotti was 18, when she got the part of Disney’s Snow White and the Seven Dwarfs, in 1937. Her father was a vocal coach hired by Disney to help cast the part. She was paid $970.00 for her work on the project, and Disney (of course) made millions.

I know very little about this woman, and how she made a living post 30’s.

MAY 2001, Findadeath.com friend David Mize sends this information about her:

Miss Caselotti lived in a small home on the outskirts of Hollywood adorned with a wishing well like the film’s in her front yard and decorated with statues of the friendly dwarfs and an autographed photo of Walt Disney. After she starred in Snow White, she had a brief role in “The Wizard of Oz” and made several radio singing appearances. She also wrote a book on singing at home, entitled “Do You Like to Sing?”

She was unable to really cash in on her success as the voice of Snow White, however. After the film became a smash hit, she was told by Jack Benny that he had asked Walt Disney for permission to use her on his radio show and was told,” I’m sorry, but that voice can’t be used anywhere. I don’t want to spoil the illusion of Snow White.”

She made several promotional appearances for the film alongside Walt Disney himself, and also is featured on a variety of promotional, autographed Snow White memorabilia like prints and photographs. A 1987 commemorative CD of the music of “Snow White“ also includes an interview with Miss Caselotti recalling how much the film meant to her and her remembrances of Walt Disney.

Miss Caselotti later turned to an opera career, but gave it up when she married. She was widowed three times and married her fourth husband, Florian St. Pierre, in 1989.

I know that in her later years, she made a tidy sum selling autographs. I went to an autograph show once, and I met her there. She had to be around 78 at that point, still with that goddam Snow White ribbon in her hair, talking in that baby voice – which you can take for only so long.

The topper was when she went into the ladies room to eat her lunch. I kid you not. I sent in a friend to follow her in (I don’t know why.) and she was eating a bagel. Don’t judge me, you would have too! You learn a lot about a celebrity, through their toilet habits. For instance, Esther Williams does not wash her hands (True!), but I cannot even tell you about my Red Buttons experience at Martha Raye‘s memorial service. Gross, but extremely funny.  But gross.

She once said, “I know that my voice will never die.” She was right. As for the rest of her:

Adriana lived in a bizarre looking house, on S. Larchmont Boulevard, in LA. 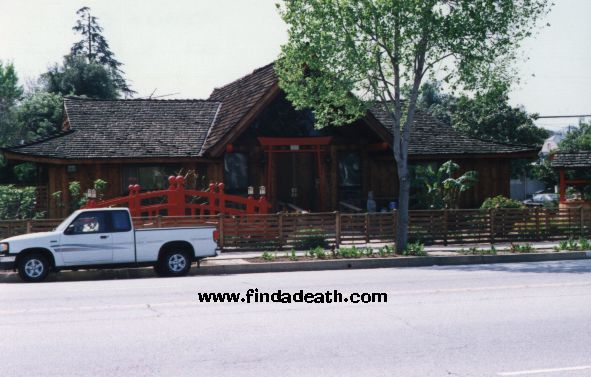 Very near Hancock Park. Her house number was 201. Here’s the front door. 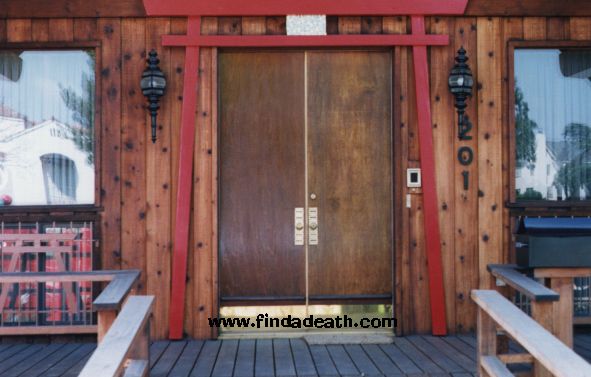 Here is her Snow White Wishing Well, in the front of the house. 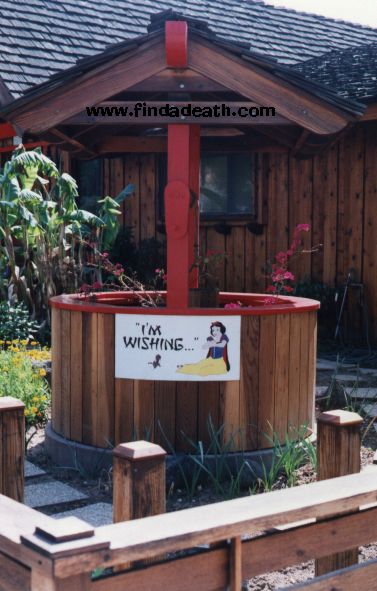 Here is a publicity photograph of her in front of the house, in all her glory. 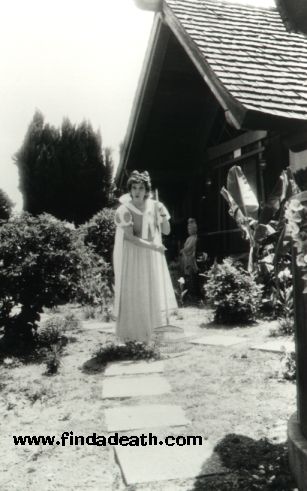 On January 19th, 1997, Adriana finally succumbed to cancer, that had plagued her for a few years. She had her left breast removed previously, and lung cancer developed in mid 1996. She eventually succumbed to respiratory failure in her home, just after midnight on the 19th. She was 80 years old.

Roy E. Disney, vice chairman of the board of the Walt Disney Co. issued a statement, “We really feel as if we’ve lost a member of the family. Adriana played such an important part in our history and became the true embodiment of that wonderful character.” Whatever.

Adriana had her body cremated, and instead of being interred near her mother, in Hollywood Memorial Park (Forever), she was scattered off the coast of Newport Beach, CA.

Trivia from Find a Death friend Valentine:  In the seventies she lived in Hollywood or the outskirts anyway, across the street from Mary Kay Bergman, the voice-over actress who would grow up to take over as Snow White’s voice for read along books, commercials ect. when Adriana got too old.   Thanks.

2 thoughts on “Adriana Caselotti (The Voice of Snow White)”