Alice Ghostley was a staple of 60s and 70s TV.  You can look her up on the IMDB and see tons of television appearances including Chico and the Man, CHIPS, Good Times, The Odd Couple, Mayberry RFD, and of course Bewitched.  Her film credits include To Kill A Mockingbird, The Graduate, Gator and Grease. 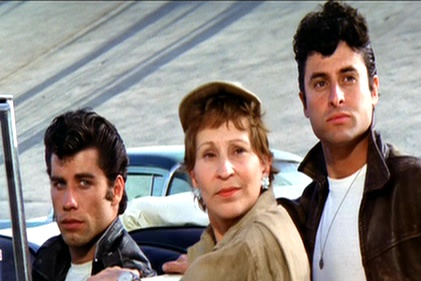 Alice was married for 52 years to Felice Orlandi who died in 2003 and whose cremains are scattered under the orange tree in Alice’s backyard.  They lived together in this nice house in Studio City, just up this driveway. 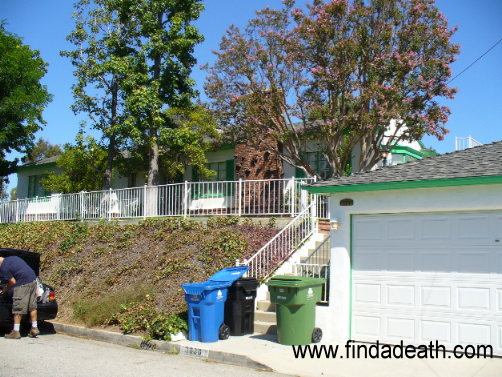 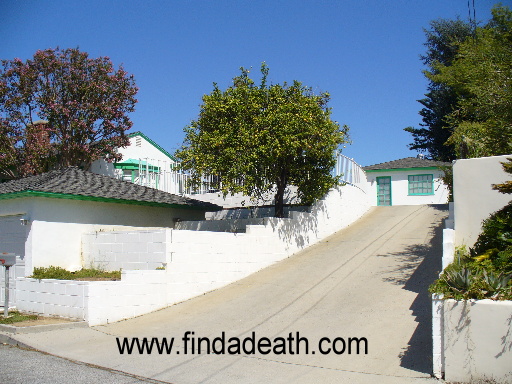 Back in ’94/’95 when I was still running Grave Line Tours, I had the pleasure of taking Alice, her sister Gladys and another friend, on tour. When they first entered the hearse, Alice had on sunglasses. When she removed them, it was like seeing an old pal. I said, “Oh! I know you!”  I remember the other people on the tour not having idea who she was. I made a point of taking her past her Bewitched co-stars homes.  Lizzie Montgomery (very sweet), Agnes Moorehead (I tried pumping Alice for info, saying, “I heard she was a lesbian!” Alice said, “I heard that too!”  No dish from Alice Ghostley, not even when we passed the location of Paul Lynde‘s death home. She just smiled, and mentioned going to wonderful dinner parties there. She was really a sweet woman. I corresponded with Gladys Ghostley briefly afterwards.  She told me Alice wouldn’t let me take a photograph of her with the hearse because she was superstitious. Alice did give me her autograph. 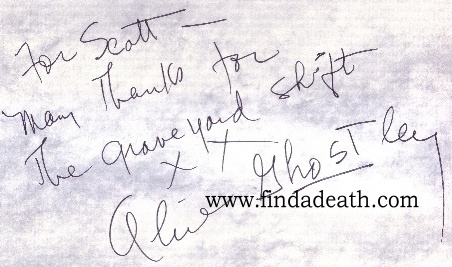 A lot of people think that Alice and Paul Lynde were basically the same person onstage – same trademark mannerisms.  As I addressed in Paul’s story, he pretty much ripped her off.  In one of Alice’s obituaries, Kaye Ballard backs this statement up, “If anyone was influenced, it was Paul Lynde who was influenced by Alice.” 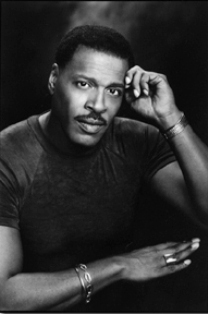 November 2010 – I met Meshach Taylor recently – he played Anthony on Designing Women.  I asked him about Alice, and he acknowledged the Paul Lynde thing.  He told me that he saw New Faces of 1952 starring Alice, and mentioned to her that Lynde had ripped her off.  She replied with an “I know!”

I asked him if he had any anecdotes about Alice.  He said that she had no idea she was as funny as she was.  She would just say something simple, while on the set.  Everyone around her would crack up, and Alice would ask, “What’s so f*cking funny?!”

He also mentioned another incident.  They were doing some voice over/radio promotion with Armstrong Tiles.  Meshach said they were getting paid a fortune to do it.  Somehow the amount of money the principal actors were making, got back to Alice.  She said she wasn’t making nearly that much.  Meshach said that he held up production and wouldn’t proceed until all the actors were paid the same.  He said that Alice was in tears, stating that no one had ever stuck up for her like that.

You could tell that Meshach loved working with her.  What a priviledge.  Now he’s dead.

Death Hag Russell Hichey sent us this photo of the real Designing Women home where they definitely did NOT. EAT. DIRT. 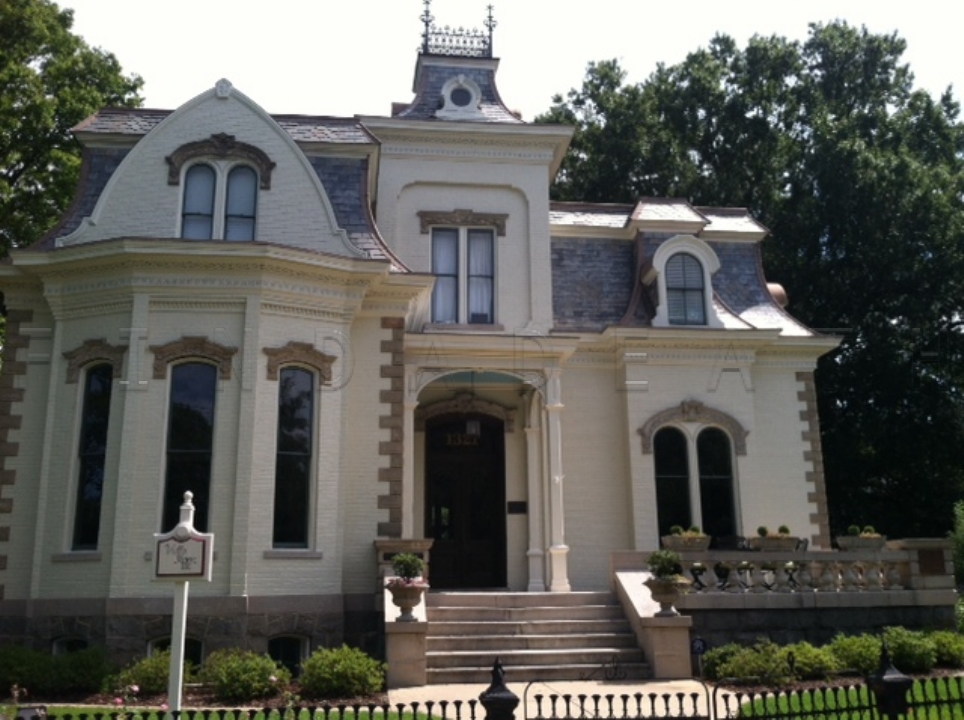 In recent years, Alice had developed colon cancer after a series of strokes.  She was bed ridden towards the end, basically on pain medications like Lorazepam, Oxycodone, and morphine.  How do I know this?  Because.  I do. 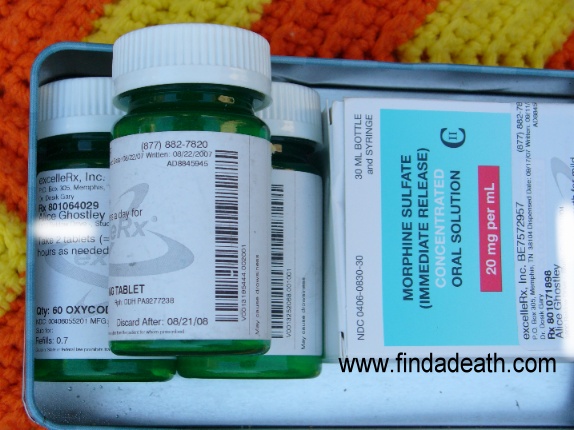 Alice passed away on Friday, September 21, 2007.  She was 81 years old.  Her body was removed early Saturday morning, before most of the neighborhood awoke.

My friends Crystal and Methuselah went to Alice’s memorial service, which was held in the backyard of her home on the 27th.  Kaye Ballard was there, Billie Hayes, the Bloodworth-Thomas’ were there, but the cast of Designing Women were conspicuously absent.

Crystal writes in, “The memorial held in the back yard area around the pool. It was officiated by a Catholic priest although Alice was not Catholic. Alice had met him at a wedding and they hit it off. There were probably about 50-60 people there – a lot of older actors. The costume designer from Designing Women was there so I went up and introduced myself and asked if he had designed the Christmas tree skirt and he said yes. 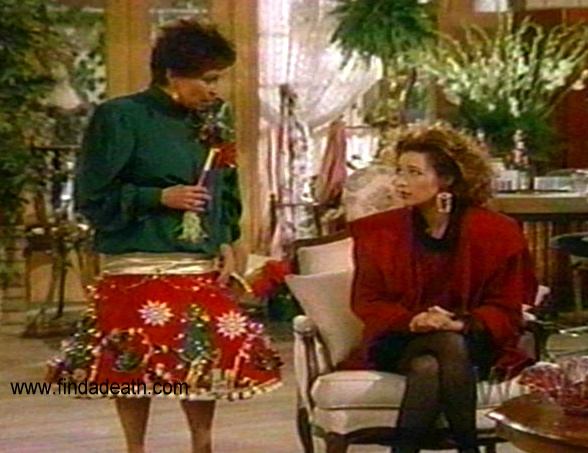 I told him it was absolutely priceless. Gladys, Alice’s sister was also there and very very sweet. She looks a lot like Alice. We introduced ourselves and then when we left we went over and kissed her good-bye. She wanted to give us her phone number so we could come and visit her:-) I got you a memorial card. 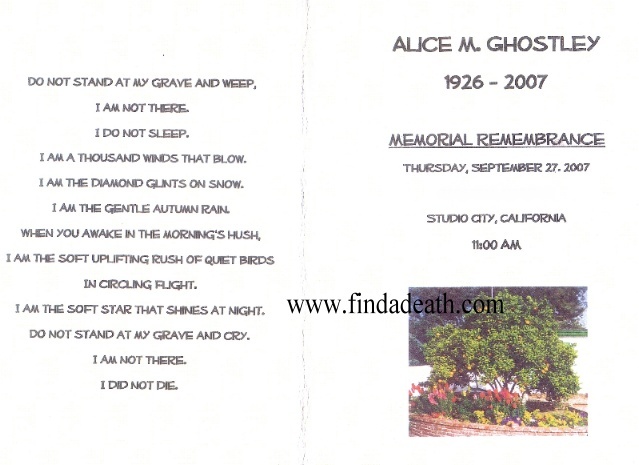 We also took a couple of pictures, one of Alice when she was young, and another of the table at the service.. 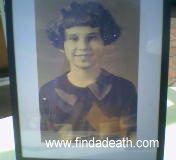 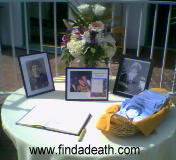 We also found out that Felice’s ashes are scattered under a tree in their yard, which is probably where her ashes will go too. There is a picture of the tree in the memorial card.
The house was very nice inside. Alice obviously LOVED cats as there were pictures and statues of cats throughout the house.

When I got news that Alice had died, I penned a quick note to Gladys – reminding her of our acquaintance, and a few weeks later I received a nice note saying, Thanks for the card and for remembering Alice. She was such a beautiful person.  I am enclosing the speech that I said at the memorial service, it was short and sweet.  RIP, you very funny lady. 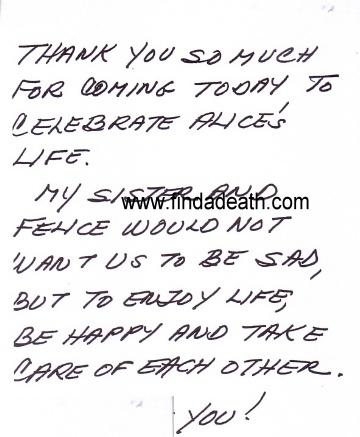 Gladys is now gone, and they are both buried together.  Thanks James in Dallas.

Trivia from Crystal: Gladys told me that Raymond Burr used to raise orchids and named one of them the Alice Ghostley orchid. She also said that when Raymond died the only thing he had on his dresser was a picture of Alice.

My gift to you, the skirt scene.  Happy Holidays, Death Hags. 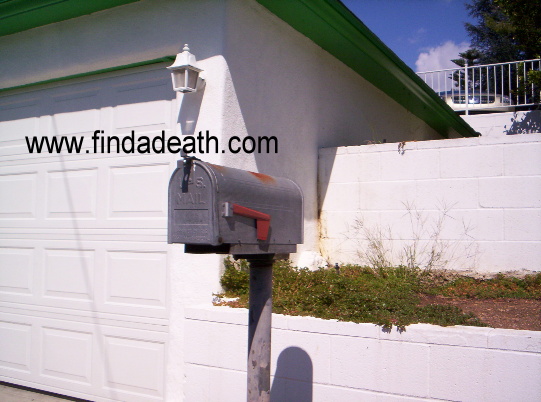