Uncle Arthur: When do you want the life of the party to appear?
Endora:  You mean you?
Uncle Arthur: Who else?
Endora: How about half past never?
Uncle Arthur [to Samantha]: She’s joking.  She’s not very good at it, but that’s what she’s doing.

What a complicated, funny man.  He only made 10 appearances on Bewitched as Uncle Arthur, but most people assume he was on more often because his performances really stood out.  Born in Mt. Vernon, Ohio, educated at Northwestern University – he made playing gay acceptable.  He did it when it was not cool to be gay publicly, and amazingly got away with it.  Nowadays its completely acceptable, right?  Riggggght.

Paul amazingly played straight quite a bit, often retooling his role of Harry MacAfee that was written for him for the original Broadway show Bye Bye Birdie, which was eventually made in to a film which Paul nicknamed, “Hello Ann Margret.”  He carved a name for himself with frequent television appearances, specials and even a couple of (failed) series.  Eventually he was hired on The Hollywood Squares, and that… was magic.  He really made a name for himself there, and got away with murder.  Read some of Paul’s zingers here.

Paul grew increasingly bored on The Hollywood Squares.  He knew full well that it made him a household name, but he really wanted to be taken seriously as an actor.  Seriously.  He wanted to play a murderer or something equally drastic.  That was never to be.

He also drank.  A lot.  He was really abusive to people while under the influence.  Going for the throat really, and there are plenty of stories of his legendary insults.  He destroyed people verbally.  Sometimes that happens when fat kids grow up.

Though he never shared the reason, eventually Paul did stop drinking almost completely.  He was still just as funny, though not nearly as “evil.”  Paul smoked pot, and did indulged poppers.

Paul had a nice little home on Palm Drive in Beverly Hills, which we can now see, courtesy of my friend EJ Fleming, who generously searched his files and found it.

The home has been destroyed, and this new house is there now. 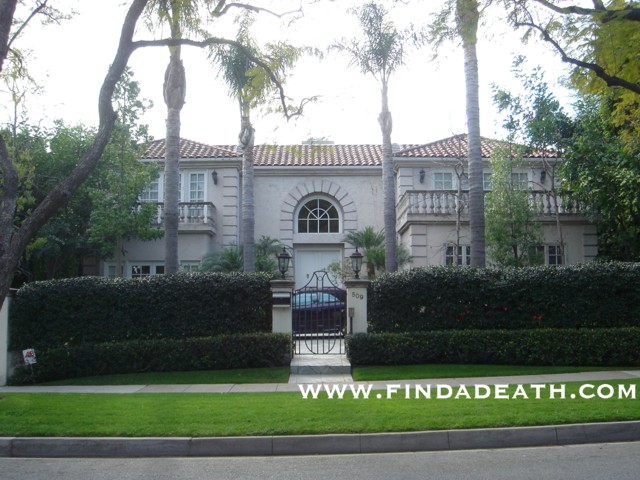 Mark Langlois sends these great pictures of Paul inside the home.

In January of 1982 Paul was supposed to do a television appearance at his house, and didn’t answer the phone or the door when the crew arrived.  There was a delivered newspaper in the driveway.  Later, other friends grew concerned and after a party, two of them went to Paul’s house to hear Paul’s dog going mental, and more papers in the drive.  They drove to a phone booth and called police.  Cops said they had to wait 48 hours to take action, Paul’s friends couldn’t wait.  They broke in, setting off alarms (no one came).  They found Paul, “in bed, lying on his back, his body twisted and his hand outstretched, reaching for a bedside panic button to alert his alarm service.  His hair was neatly combed, and his blue eyes were wide open.  The body was cold and stiff.” 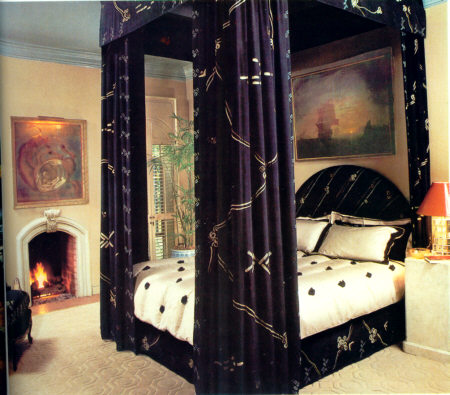 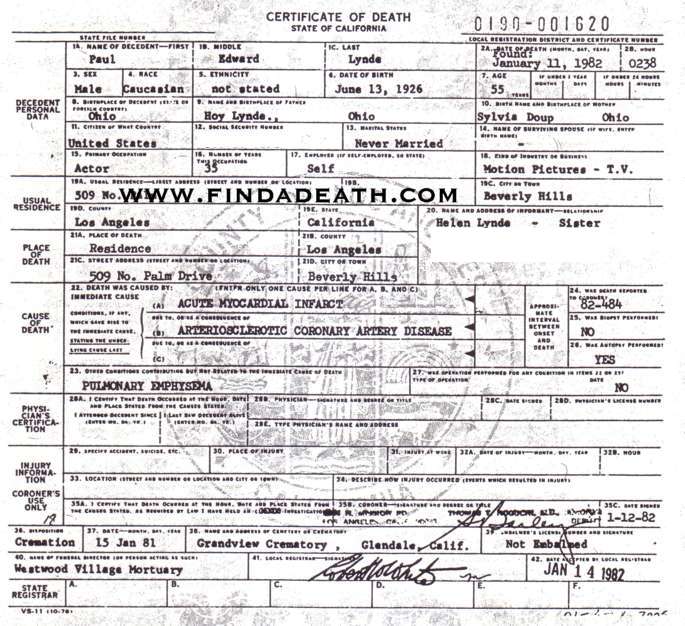 250 friends were at the funeral, including Alice Ghostly, Dody Goodman, Peter Marshall and Joan Rivers.  Later, his cremated remains were buried in a cemetery near his hometown.

In one of the more recent incarnations of The Hollywood Squares, Ellen Degeneres was brought on as center square.  I believe this was one of her first big breaks after her debacle with coming out and psycho Anne Heche.  In her coolness, Ellen brought a framed picture of Paul with her, and had it prominently displayed in the center square.  I love Ellen.

Paul once lived in a house on Cordell drive, that house that was previously owned by Errol Flynn.  He also owned a car of which only 17 were made. JFK owned another of the cars.

On July 17th 1965, Lynde was staying at the Drake hotel in San Francisco.  He had a friend named James Davidson staying with him and the two went out and got pretty hammered.  Davidson decided to show Paul a trick and dangled off the hotel balcony by his fingers, as you do.  It didn’t go well.  He was slipping, and Paul desperately tried to help him in, but Davidson fell to his death.  Police witnessed the entire event, and there really wasn’t a huge scandal, though some say it affected his career.

Good stuff as usual, Kevin.  Thanks.

Findadeath.com friend Jon C. Darby writes in: Paul Lynde was the original inspiration for a joke that has made its way into, among other things, the movie GROUNDHOG DAY. After a high speed chase through the Valley one night when he was driving recklessly while intoxicated, he crashed his car into a mailbox. Cops came to the car, guns drawn, and he lowered his window and told them “I’ll have a cheeseburger hold the onions and a large Sprite.”

Findadeath.com friend Bill Totten sent us this: “I was in a bar out in West Hollywood in summer 1978, with a friend. We were visiting LA on vacation, and doing the usual stuff: Universal Studios, Disneyland, every club we could get into, etc. My friend and I had some time to kill before we went out to the Nu-Art Theater to see a midnight screening of Eraserhead (we’d seen “Pink Flamingos” at the same theater the previous week) and guess who we saw drinking and laughing and having a “gay” old time? Richard Deacon, Paul Lynde and Nancy Walker! This was just before Nancy Walker went on to direct Can’t Stop the Music. Hell, maybe that’s what they were laughing at, trading Alan Carr stories. They were just cracking up with each other, and my friend and I asked the bartender to send them a round of whatever they were drinking. They got the drinks, and the server told them who sent them the drinks, and they looked in our direction and toasted us with big smiles. As we were getting ready to leave, we were waved over, and we introduced ourselves and I told them how great it was to meet them all. I was too shy to ask for autographs, because they were out in public at as “private citizens” at a gay bar, but now I wish I would have. Who knew that Lynde and Deacon would pass away not many years later. Lasting impressions: Nancy Walker was so tiny, Paul Lynde was so very tanned, and had a great smile and smoked like a chimney. Richard Deacon was just really big.

Thanks Bill. What a cool cool story!

Alice Ghostley played Esmerelda on Bewitched.  I used to think of Alice as the female Paul Lynde, which is sort of true.  Reading recently, Paul apparently scammed (in a friendly way) Alice’s mannerisms and made them his own.  Charles Nelson Reilly also admits that he scammed Paul, who scammed Alice.

I recently spotted Alice  making an appearance in Sabrina the Teenage Witch as Sabrina’s great grandmother . . . . I thought that was a nice touch, presumably by someone in casting.

Another entry:  You may have already heard this, but Alice  as well as the guy who played Dr. Bombay have made repeat appearances on the NBC Soap “Passions”. Ghostley plays a dead witch and the Dr. Bombay guy plays a witch doctor for one of the main characters (who is also a witch)…

A huge thank you to Steve Wilson and Joe Florenski for their book Center Square, which profiled Paul, and finally dispelled the rumors about Paul’s death.  We have the real story, thanks to them.  Much appreciation gentlemen.