Everybody has a heart. Except some people.
Without wonder and insight, acting is just a trade. With it, it becomes creation.
Acting should be bigger than life. Scripts should be bigger than life. It should all be bigger than life.
Today everyone is a star – they’re all billed as ‘starring’ or ‘also starring’. In my day, we earned that recognition.
I often think that a slightly exposed shoulder emerging from a long satin nightgown packs more sex than two naked bodies in bed.
People often become actresses because of something they dislike about themselves: They pretend they are someone else.
I was never very interested in boys – and there were plenty of them – vying with one another to see how many famous women they would get into the hay.
I’d marry again if I found a man who had fifteen million dollars, would sign over half to me, and guarantee that he’d be dead within a year.
To fulfill a dream, to be allowed to sweat over lonely labor, to be given a chance to create, is the meat and potatoes of life. The money is the gravy.
An affair now and then is good for a marriage. It adds spice, stops it from getting boring… I ought to know.
Show More Quotes
Show less

Bette Davis is a Legend.  Over eighty films, 2 Oscars, 10 nominations, and an Emmy. By 1983 she kicked cancer’s ass, overcame a stroke and a broken hip in quick succession. Ultimately it was the cancer that returned to claim it’s star prize.  That was pretty good, eh?

Inevitably people will compare her to Joan Crawford.  Davis, like Crawford… they both had certain periods in their lives that made them look like completely different people.  4 different periods, 4 completely different looks.  It’s bizarre.  Another interesting comparison – both actresses had vile children who wrote nasty books about them.  Fortunately in Bette’s case, her daughter did it while she was still alive.  Bette was able to defend herself with her own book.

“I am still recovering from the fact that a child of mine would write about me behind my back, to say nothing about the kind of book it is. I will never recover as completely from B.D.’s book as I have from the stroke. Both were shattering experiences.” Her memoir concluded with a letter to her daughter, in which she addressed her several times as “Hyman”, and described her actions as “a glaring lack of loyalty and thanks for the very privileged life I feel you have been given.” She concluded with a reference to the title of Hyman’s book, “If it refers to money, if my memory serves me right, I’ve been your keeper all these many years. I am continuing to do so, as my name has made your book about me a success.” Snap.

Bette had lived the life, and had many homes.  Her home in Laguna Beach is still a tourist attraction and a Historical Landmark.  This is the home she was living in during production for All About Eve. 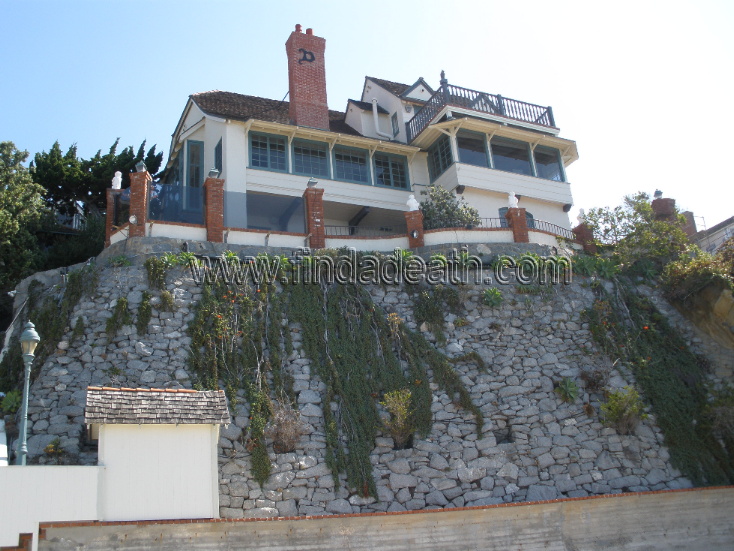 Co-star Celeste Holm:  “I walked onto the set of ‘All About Eve’ on the first day and said, ‘Good Morning,’ and do you know her reply? She said, ‘Oh shit, good manners’. I never spoke to her again – ever.”

Geographic entertainer Brian Donnelly and his escort Christine Davis visited the Laguna landmark and documented it for our posterior.  I know.  It’s a joke.  Deal.  Mailbox alert. 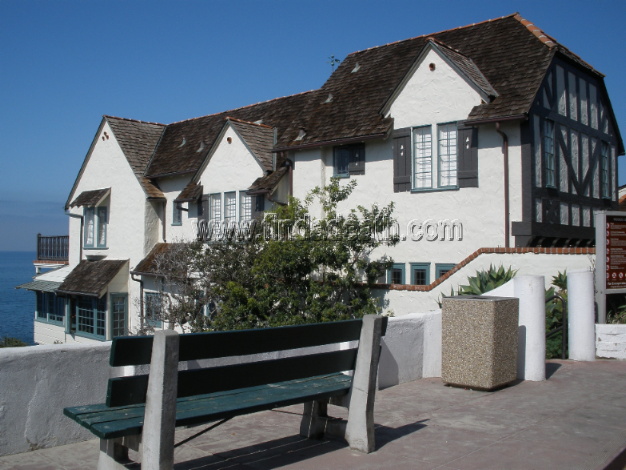 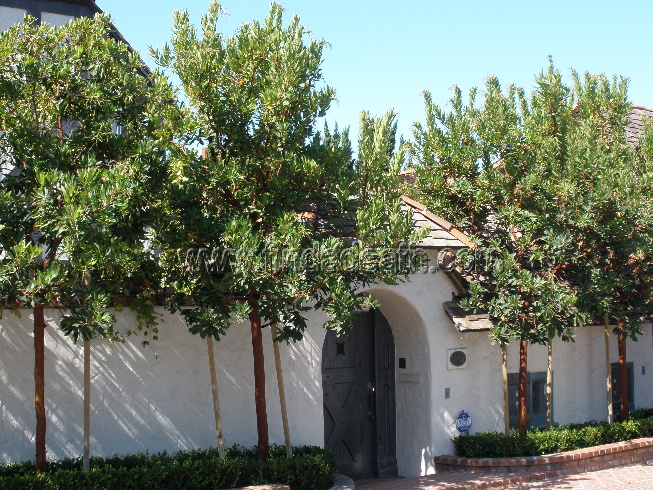 Her last home was on the 4th floor of the Colonial House, a very well known building in West Hollywood.  This place has hosted a plethora of people that have went on to become serious stars including Julia Roberts, Sandra Bullock, Tim Burton, Clark Gable, Myrna Loy etc.  Bette’s own apartment (which I understand she put a canopy on her balcony against the building rules.  What were they going to do, evict her?) went on the market in early 2010 for just over 2 million.  She allegedly bought the apartment (with the help of Miss Roddy McDowall) because it overlooked another apartment building she and her mother lived in, when they first got to Hollywood, dead broke. 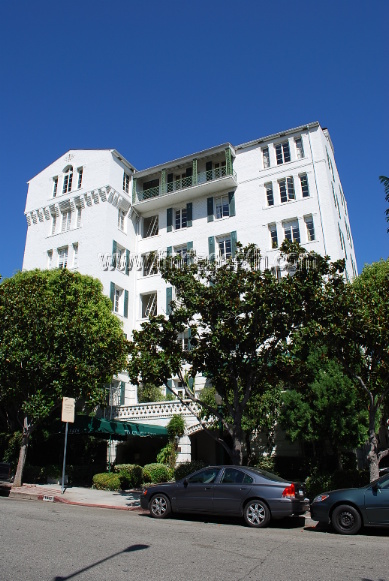 Jamie Lee Curtis was once asked, “What is first thing that comes to mind when hear the name Bette Davis?”

“Heat.  I have to qualify this.  I was president of the homeowners association at the Colonial House in West Hollywood where she lived.  I would get calls from her.  (Jamie impersonates Bette Davis’ voice) “Hello.  Jamie.  This is Bette Davis.  It’s too cold.  I want the heat.”  I’d say, “Miss Davis, I understand you are chilly, but its July.  I can’t in good conscience go to the board of directors and say that we’re going to turn on the heat and charge people for heat in July in Southern California.  I really would suggest you get a heater or plug ins.”  She’d answer, “It’s too expensive on my electric bill.” 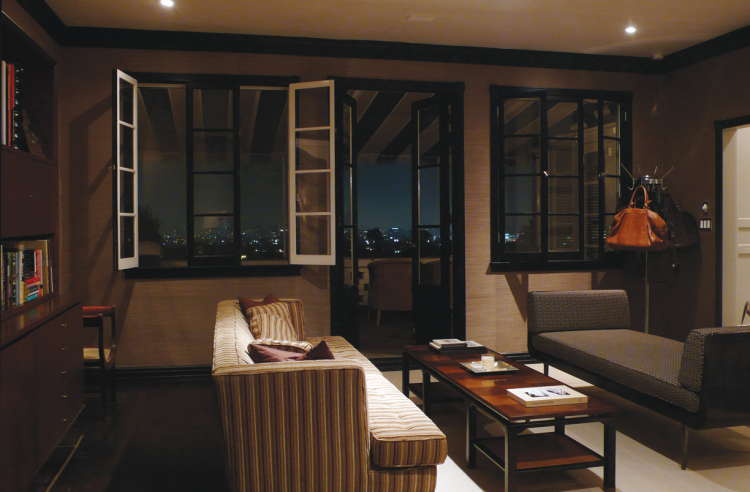 My pal Mark Cramer had an encounter with the great lady.  Mark says, “It was an incredible moment for me, but it was just one small moment.  In the mid 80’s I was visiting a friend that lived near to the Colonial House.  I parked my car across from the building and noticed a white mist near the front entrance.  It was dark. I crossed the street and I noticed a small woman standing there, just barely visible through the cloud of smoke. 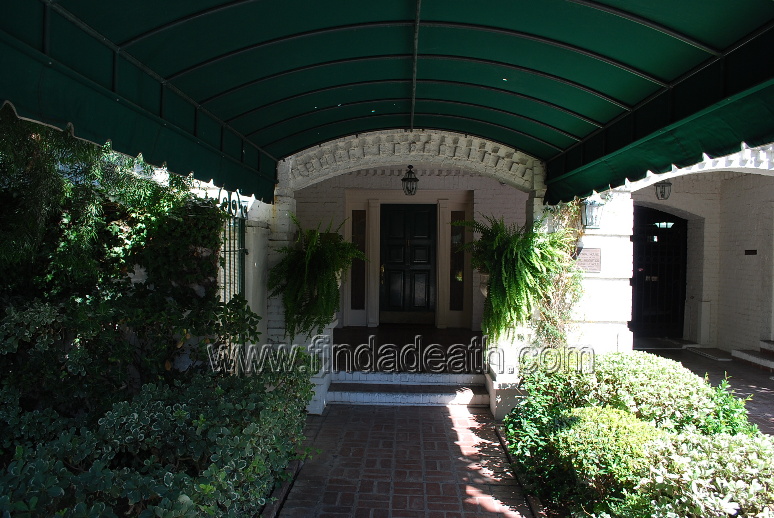 As I got closer, I saw that it was Bette Davis.  She was so tiny and dressed exquisitely. I remember she had on white gloves (with big yellow nicotine stains on them, no doubt).  As I walked past I looked at her, nodded and said “Good evening Miss Davis”. She smiled and said “Hello.” It’s something I will never forget.  Thanks Mark – a great moment to remember.

“Goddamnit I was acting before you were even thought of!”

In 1987 Lindsay Anderson was directing Bette and Lillian Gish in The Whales of August, he paid a compliment one day to Gish. “Miss Gish, you just gave us a marvelous close-up!”to which Davis replied, “She should. She invented them.”  Someone I know that worked on the film told me that you could smell the death on that set.

Her last film – some would call it her “death bed” performance – The Wicked Stepmother.  Bette’s body had given up, and it’s apparent.  According to some, Bette had a disagreement with the director and walked off the set.  Others say that she saw the dailies and didn’t like the way she looked – which was dreadful.  Historically – it’s fascinating.

In October of 1989, Bette was honored with lifetime achievement award (which in other circles is considered the “Goodbye Award.”) San Sebastian Film Festival in Spain.

Bette’s cancer had returned and she knew it. In her acceptance speech she stated, “If they’d waited any longer to give me this award, I wouldn’t be here to receive it”.

She then went to Paris, a stopover before her return to America. 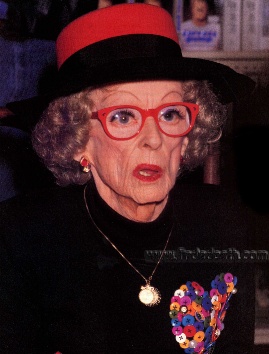 On October 6, 1989, Bette was taken by ambulance to The American Hospital in Paris. 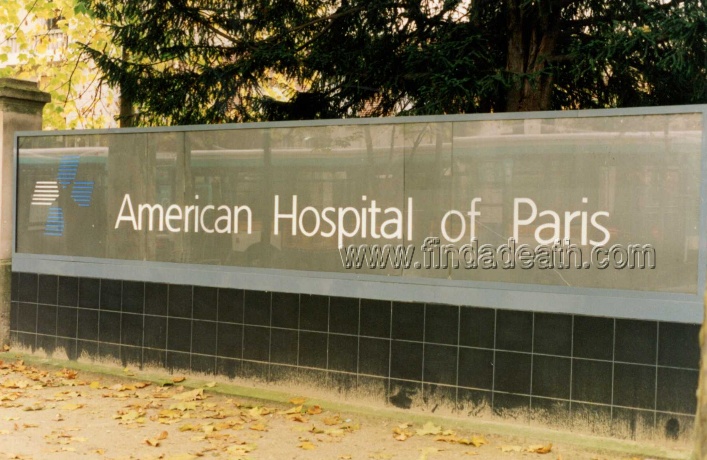 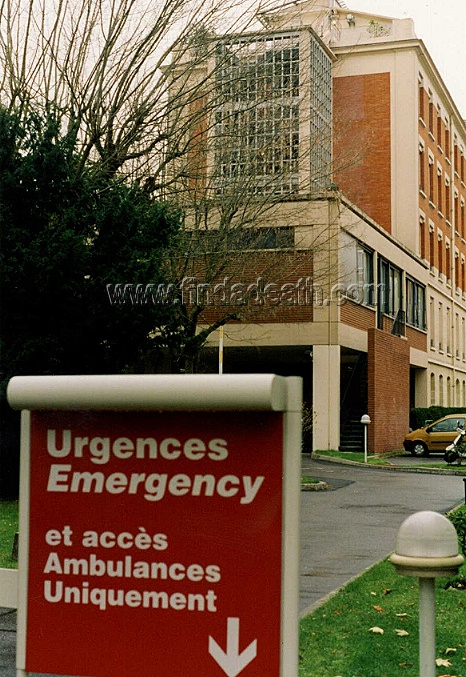 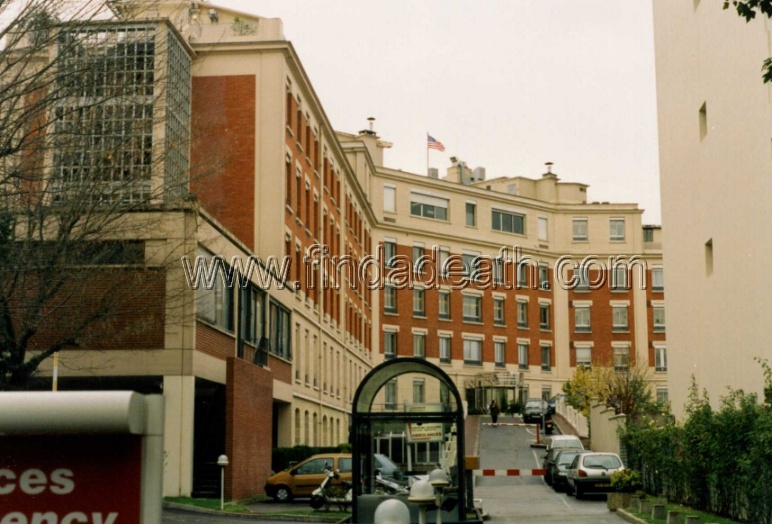 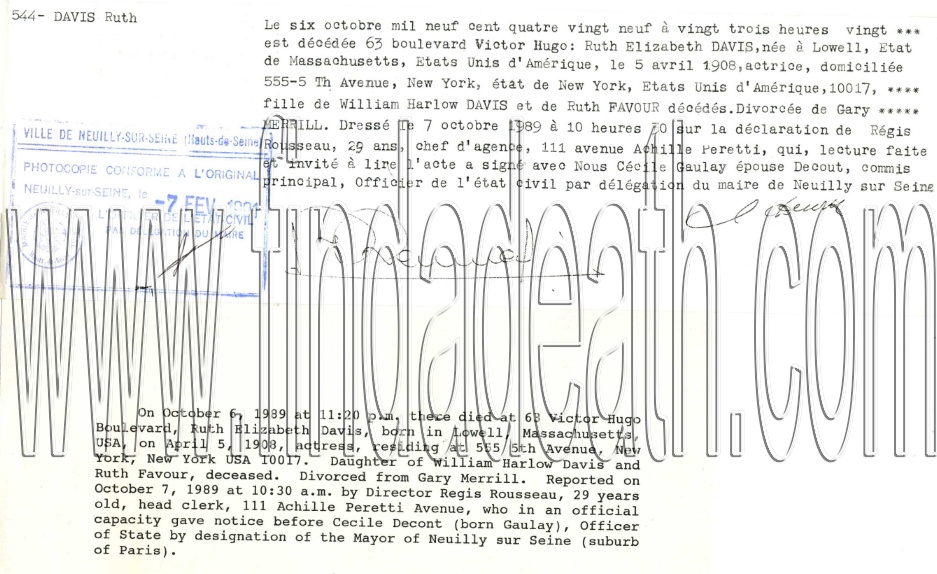 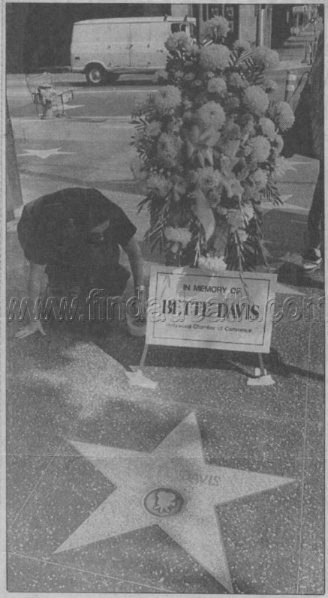 “I don’t want anyone sending money to any little charity instead of flowers. I want millions of flowers…I want everyone to weep. Copiously”.

Her funeral was held on October 12 at Forest Lawn Hollywood Hills.  The Reverend Robert M. Bock of the First Christian Church in North Hollywood oversaw the service.

She was survived by her ungrateful daughter B. D., a son, Michael Merrill, and another daughter, Margot Merrill.

She is buried in an impressive grave in Forest Lawn, Hollywood Hills.  Her grave marker reads,

Davis became even more embedded in pop culture history when Kim Carnes sang the #1 song Bette Davis Eyes in 1981.  “It was a thrill to become a part of the rock generation” Carnes gifted Bette with her gold record, which adorned the wall of her last home.  Could you imagine if Bette had donated her eyes? Oh my God.  If you were the recipient?  Could.  You. Imagine.  How wild it would be to actually have Bette Davis’ Eyes.

I was still living in Chicago when Bette died, and that evening I went to a club called Berlin. 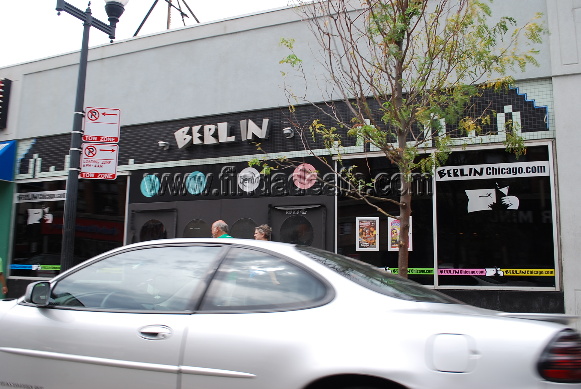 The video screen came down and the song Bette Davis Eyes began. I remember really having a somber moment.  She was a huge presence in film and in the world, and that was it.  Bette Davis was done.

Here’s a photo of the house in Hancock Park, where Bette and Joan Crawford filmed Whatever Happened to Baby Jane, as well as the newspaper building where Jane Hudson took out an ad. 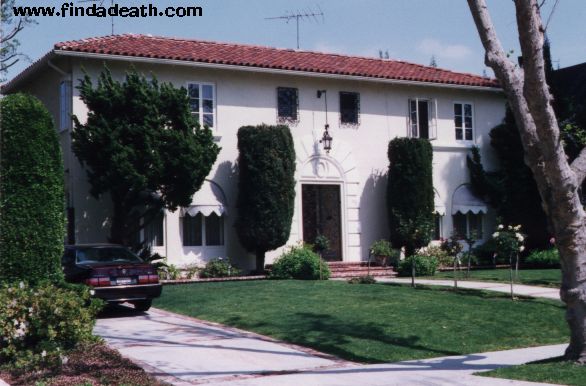 Find a Death friend Rick sends us this:  Back in the eighties, Bette was in Dallas to film the Ron Howard film Skyward. I found out where she was staying and sent her a dozen daisies, with a note telling her how much I had admired her body of work and her success at surviving in an industry that doesn’t value older actresses. About a week later, I was amazed to get a cool 8 1/2 by 11 photo from her, signed and personalized, and a real sweet note thanking me for the daisies which she said was her favorite flower. What a class act.

Did you know that Bette recorded a single in 1962 – of a tune called Whatever Happened to Baby Jane?  Well my buddy Michael Krahn sent it to me, and it is fantastic.  I’d link it here, but YouTube will snatch it down in a heartbeat.  See if you can find it, it’s pretty funny.

Find a Death friend David Fowles visited the worst wax museum in the world, in Hollywood, and snapped this photo for us.  Thanks David! 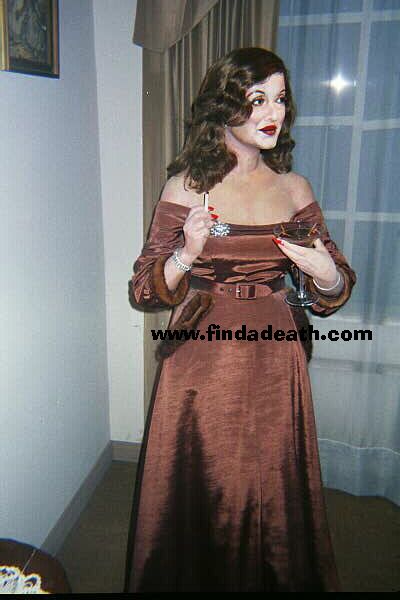 Sometimes wax museums get it right.  Rarely.  The new Madame Tussauds in Hollywood has one of Bette that is pretty amazing.  Thanks to James Rieker for sending it. 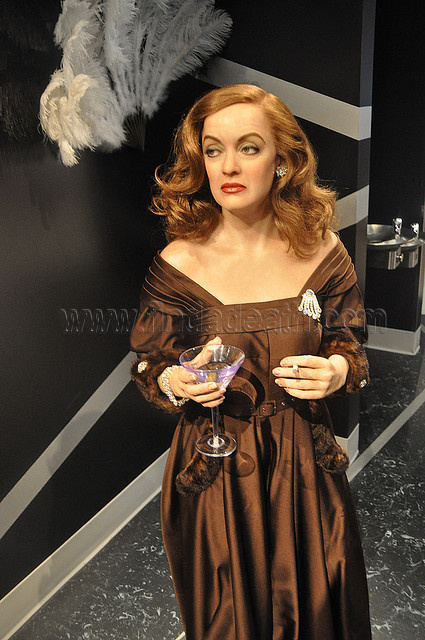 Bette is also immortalized with her foot and hand prints at the Chinese Theater. 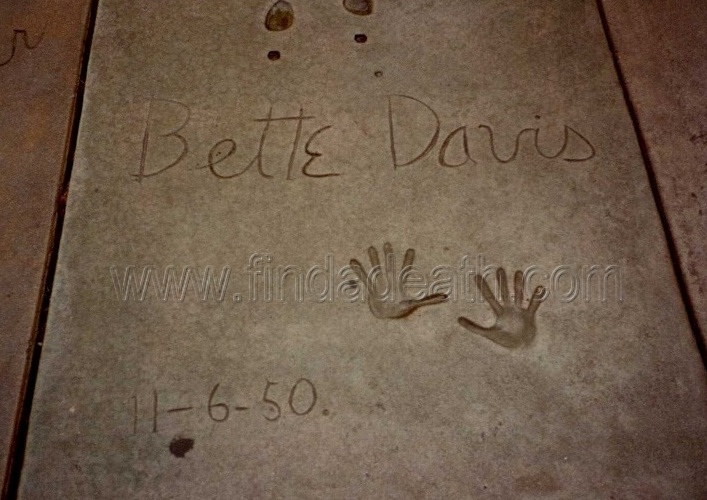 Whatever Happened to Baby Jane came out with a special edition, which has great extra features, including a “making of” documentary of them filming in front of the house.

A copy of Bette’s Will (complete with a simple smack down to BD) is available at Celebrity Collectibles.

Back in 2003 we had a Death Hag picnic in the Bette Davis Park in Glendale.
Yes, such a wonderful place does indeed exist! 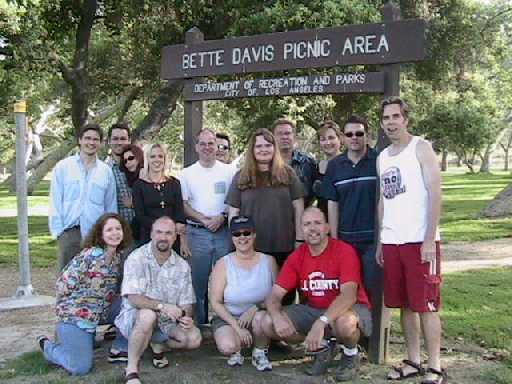