I was NEVER notorious.
I never kept up with the fashions. I believed in wearing what I thought looked good on me.
I love to swim in the nude and roam around the house in the nude. You’re just as free as a bird!
It makes me feel wonderful that people still care for me… that I have so many fans among young people, who write to me and tell me I have been an inspiration.
I was never the girl next door.
Sex is a part of love. You shouldn’t go around doing it unless you are in love.
For years I had my hair parted down the middle in a ponytail, tucked down around the sides… Well, I went and cut the bangs, and I’ve been wearing them ever since. They say it’s my trademark.
My favorite actress of all times is Bette Davis in Dark Victory. I have seen it six or seven times, and I still cry.
Show More Quotes
Show less

Bettie Page was the epitome of a model “comfortable in her own skin” and became the most famous pin-up of the post-World War II era  – a fitting outcome for a Nashville teen that was voted “Most Likely to Succeed” in high school.

Bettie Mae Page was born April 22, 1923, the 2nd of Walter and Edna Page’s six children. Her parents had a tumultuous relationship plagued by financial instability, and when Bettie was 10 years old, they divorced.  Bettie’s father, Walter, molested all three of his daughters. Bettie stated that the abuse began when she was age 13. He was eventually imprisoned for car theft. Edna tried to provide for the brood, working as a hairdresser and laundress  – but eventually had to send Bettie and her two sisters to live in an orphanage for a year for their best interest.

Bettie grew into a lovely, bright teenager who learned to cook and sew at local community centers. She graduated as a straight A student, 2nd in her high school graduation class, and won a $100 scholarship to Nashville’s George Peabody College where she earned her BA degree in 1944. Despite her love of theater arts, she first chose the more practical career of teaching. Bettie soon found her boy students uncontrollable and promptly left teaching for secretarial work.

She married a high school classmate named Billy Neal  – who was drafted into the Navy for WWII. Bettie spent the next few years moving to San Francisco and Miami and Port-au-Prince, Haiti and eventually divorced her husband in November 1947.

Bettie moved to New York City and supported herself as a secretary. In 1950, while walking along Coney Island shore, Bettie was approached by a police officer and amateur photographer named Jerry Tibbs. He started Bettie’s pinup portfolio. Bettie soon became a popular camera club model with her naughty-but-nice, girl next door looks and lack of inhibition. She reportedly posed for 20,000 photos, often in her home-sewn bikinis and lingerie.

Bettie never thought nudity was wrong. She was fond of the phrase, “naked as a jaybird, just like Adam and Eve in the Garden of Eden.”

Brother-sister photographers Irving and Paula Klaw handed Bettie a whip and let her act out playful bondage scenarios on film, while Bunny Yeager cast her as a jungle vixen in a leopard skin swimsuit. With her trademark black bangs, gleeful smile, and 36-23-36 curves – Bettie was soon featured in many skin mags including Wink and Titter as well as in bondage/fetish 8mm and 16mm films. Her big break came as the Playboy Centerfold for January 1955, in which she acted as a sexy Santa and decorated a Christmas tree. Bettie made various appearances in Off-Broadway productions and even appeared on The Jackie Gleason Show.

By 1957, the pressures of a Senate investigation of pornography along with her own increased depression made Bettie abandon modeling and she left New York for good. In 1958, she became drawn to Christian studies at Baptist Colleges, moving from Key West, Florida to Los Angeles, CA and Portland, Oregon. By 1979, after several years of failed marriages, charity work and biblical studies, Bettie was on the verge of a nervous breakdown. In Southern California, Bettie had an altercation with her landlady and was diagnosed with acute schizophrenia leading her to 20 months in a state mental hospital. After a second assault (with a bread knife) on a neighbor, Bettie was placed under state supervision for 8 years. She was released in 1992 from Patton State Hospital in San Bernardino County.

While Bettie was wrestling with her personal demons and being treated for her violent mood swings in the 1980s, a cult following was building around her old 1950s (public domain) pinup shots. Coffee table book Bettie retrospectives and The Betty Pages fanzine caught on with a new generation, and young women were now dyeing their hair black and wearing bangs to emulate Bettie’s sexy, confidant style. By the early 1990s, The Bettie Page revival was now a cultural phenomenon.

Hugh Hefner described Page’s appeal as “a combination of wholesome innocence and fetish-oriented poses that is at once retro and very modern.”

In 1993, Entertainment Tonight produced a segment on the (she’s alive!) mysterious Bettie Page who was then living in an LA group home. She appeared in shadow for an exclusive NBC TV interview on Real Life. E! produced a 2-hour bio profile of Bettie in 1998. Hugh Hefner came to Bettie’s aid, providing legal counsel to ensure Bettie’s peace of mind. Bettie signed with CMG licensing (who repped Marilyn Monroe and James Dean‘s images) and became financially secure for the rest of her life. Bettie (age 80) made a rare personal appearance with Hef at Playboy’s 50th anniversary party in 2003but mainly chose to live quietly in Los Angeles until her death.  Hefner saw to it that Bettie got everything she needed, in her later years. 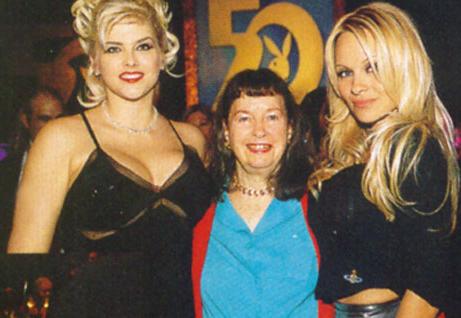 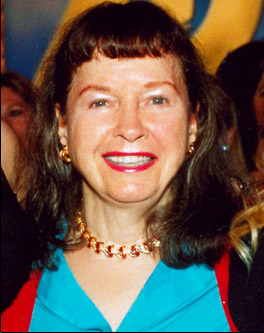 In 2005, a bio film The Notorious Bettie Page starring Gretchen Mol was released.  My pal Christine Davistold me, “Anyone who knew anything about Bettie knew that she HATED the word, “notorious.”  She always said she liked the movie, and said Gretchen Mol did a good job and was prettier than she was, but was very upset that they called it The Notorious Bettie Page. She said “I was NEVER notorious!!” 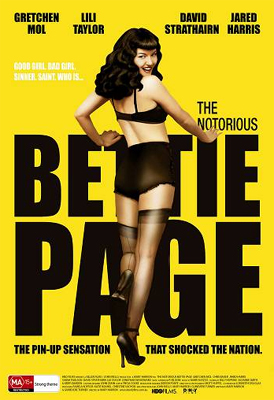 Bettie Page spent most of her final years in a this apartment building. 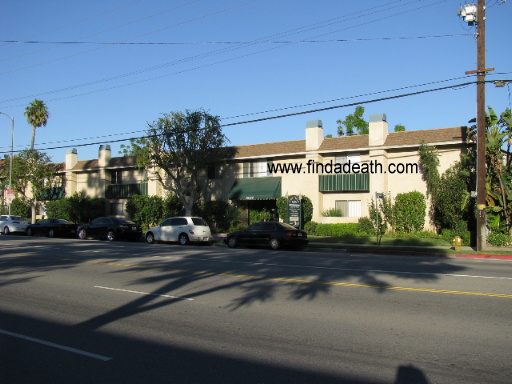 Hey, you could too! 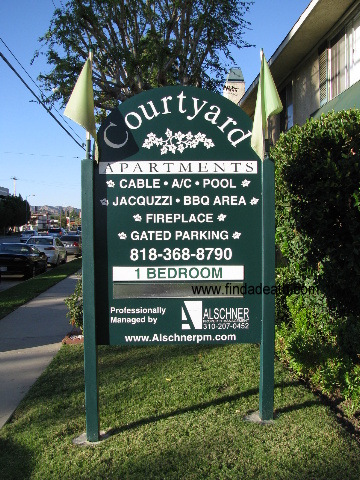 She would be holed up in her one bedroom flat, reading the Bible, listening to wholesome music, and watching old movies on television – her favorite was Dark Victory with Bette Davis. 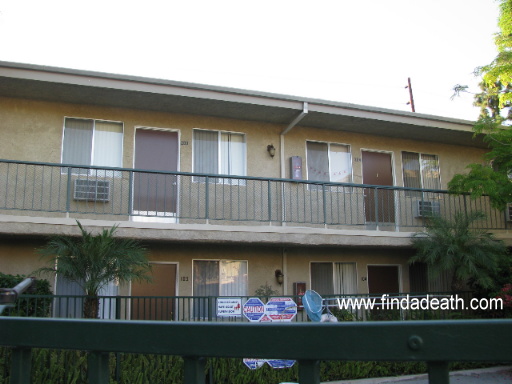 Bettie Page enjoyed catching up on diet and exercise regimens or sometimes perusing secondhand clothing stores. In 2006, she told the press: “I have no idea why I’m the only model who has had so much fame so long after quitting work.”  Wouldn’t it be wonderful to stumble on the 1950’s Bettie, sunbathing by this pool? 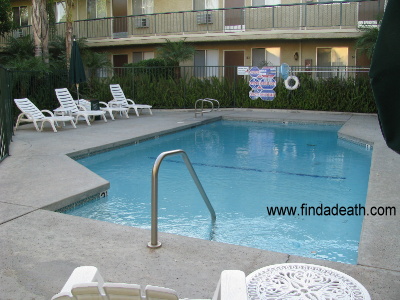 I’ll bet no one in this building had any idea such greatness was in their midst.  This is Bettie’s doorbell. 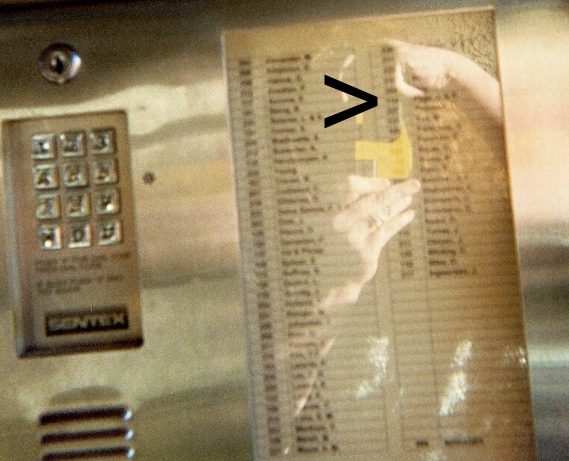 One of her last photo shoots was covered for an article in the LA Times, regarding the resurgence of her popularity.  She would only allow her hands to be shown. 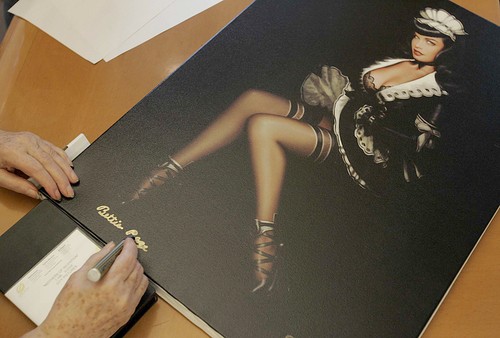 At the end, Bettie was living in a residential care facility in Chatsworth, probably unbeknownst to her, and was recovering from a bout with pneumonia when she suffered a heart attack. 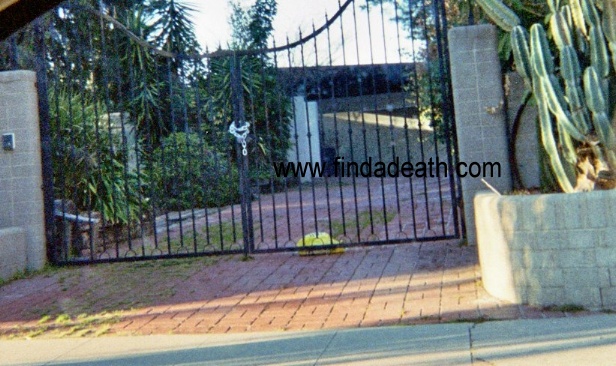 It was December 2, 2008. She was paralyzed from the waist down, and on feeding tubes.  She eventually fell into a coma and was taken to the Kindred Hospital where she was placed on life support. Bettie Page, the former “Girl with the Perfect Figure,” who preferred to be remembered by fans “as I was when I was young and in my golden times,”died on Thursday, December 11, 2008 at age 85. She was survived by her brother Jack Page of Nashville, TN and sister Joyce Wallace of Blairsville, GA.

Her death was reported by her agent, Mark Roesler, on her website. Roesler said in a statement that “She would have certainly been humbled by and amazed by the overwhelming outpouring of concern, prayers, flowers and letters that have been received in the past 2 weeks.”

Hugh Hefner gave the press this quote: “Bettie Page was one of Playboy magazine’s early Playmates, and she became an iconic figure, influencing notions of beauty and fashion. Then she disappeared. Many years later, Bettie resurfaced and we became friends. Her passing is very sad.”

A memorial service was held in the chapel at Westwood Memorial Park.

Eyewitness report, “Mary, Hef’s secretary, wiped tears, as did Hef. His #1 girlfriend Crystal, who is 23, acted appropriately but the 18-year-old twins giggled and shrugged when anyone tried to interview them.”

“Robert Schuler from Crystal Cathedral spoke, and said that Bettie loved to go to the Easter services there.”

“Devon Devazquez, had been a Playboy Playmate in the 80s, and was a friend to Bettie.  She visited her in the hospital after her stroke. She said she and Ronn (Moss, her husband who plays Ridge on The Bold and The Beautiful) were on their way to a party and were dressed in formal wear. She asked Bettie, “don’t you think Ronn looks good in his tuxedo?” to which Bettie replied, “Ronn ALWAYS looks good.” It was funny because Devon said it with a slurred voice, like someone with a stroke would speak.”

Other attendees include stripper Tempest Storm, 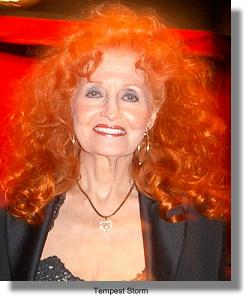 fist pumper Leon Isaac Kennedy, 3 of Bettie’s nieces, and Mark Roesler (pictured above with Anna Nicole Smith and Pamela Anderson) of CMG, the company who peed a circle around Bettie in her last years.  To be fair, they made sure Bettie was financially comfortable… while retaining exclusive rights to the Bettie Page gravy train and forbidding her to sign autographs to genuine fans for free. 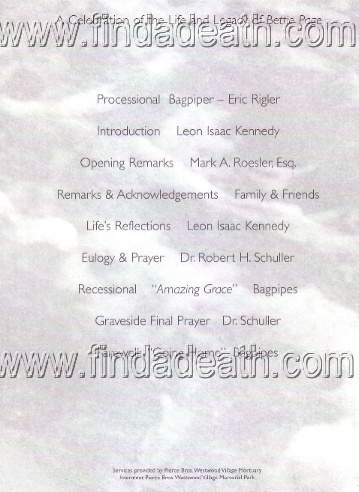 The memorial booklet was inscribed with a verse from Bettie herself,

“I was not trying to be shocking,

or to be a pioneer.

I wasn’t trying to change society,

or to be ahead of my time.

I didn’t think of myself as liberated,

and I don’t believe that

I did anything important.

I was just myself.

I didn’t know any other way to be,

or any other way to live.”

Bettie was not embalmed, and her cremated final remains were laid to rest at Westwood Memorial Cemetery.  They obviously went for the full size box burial. 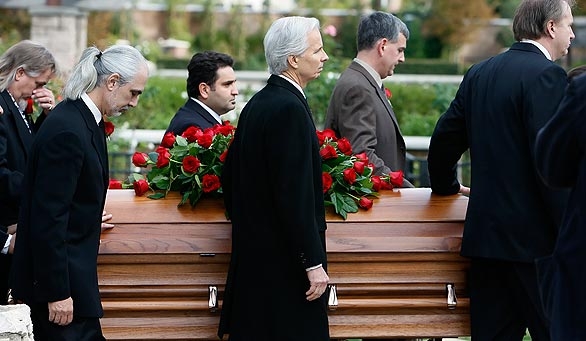 In the photograph above, the mullet haired guy on the very left is Steve Brewster, her long time fan club president and good friend. The short dark haired guy is someone who lives in the apartment complex on Balboa and was her neighbor until she was moved to the residential treatment home (which is only a few blocks from the apartment). They had been neighbors for years, and he used to help her with chores, took out her trash and stuff. He said one day out of the blue she told him she was “the” Bettie Page and he was astounded at how really famous she was.  The guy leading the pack is Mark Roesler.

She is buried next to Sam the Butcher.  Someone fast-tracked her tombstone, because it was laid (heh) within 2 weeks. 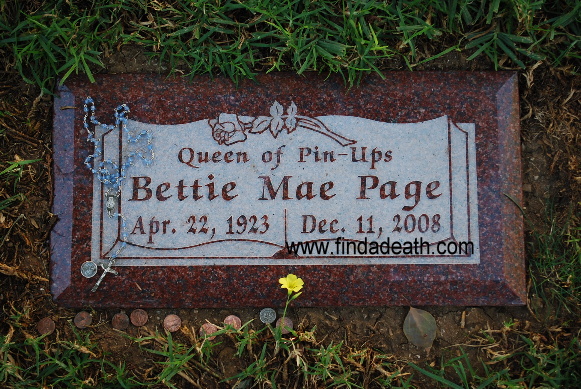 There are now a few Bettie Page shops around the country, the first of which was in Vegas. 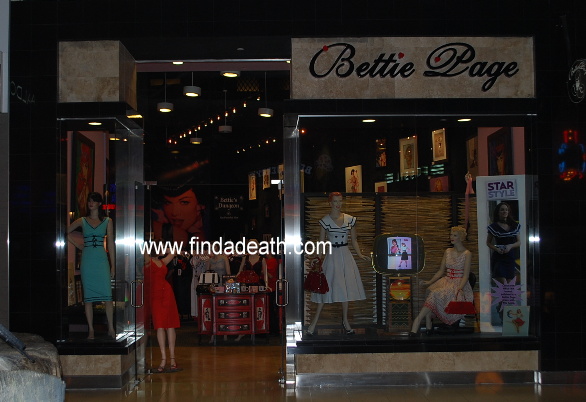 These stores specialize in all things Bettie.  Here is my friend CC with the bad-ass Death Hag tattoo (done by Kat Von D herself!), 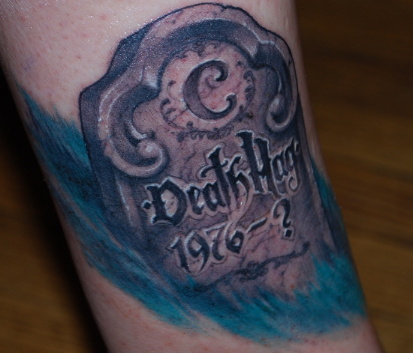 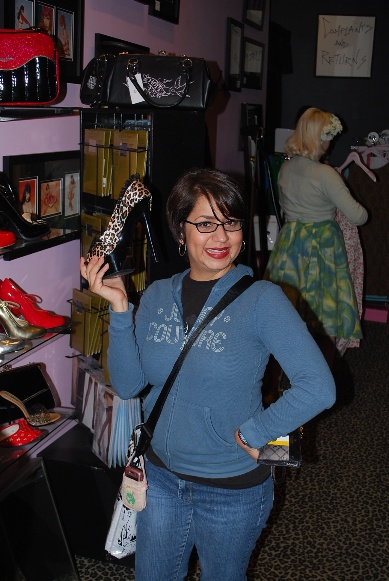 Snap it off and move on! 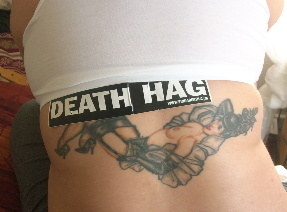 One of the last times Steve Brewster, her fan club president, spoke to her, she told him she was going to “kick the bucket” soon, and wanted her fans to remember these three things:
1. You are what you eat. 2. Master your emotions. 3. Don’t let your past poison your future. 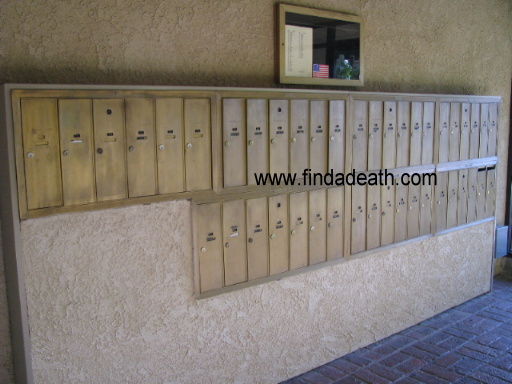