Apparently loads of people do.

Today, 2 March, 07 marks the day where the debacle of Anna Nicole’s body will hopefully end.  As I type this, her body has been taken to the church in the Bahamas, where a funeral Mass will be said.  She will finally be planted later today, next to the body of her recently deceased son, Daniel (Warning!  dead pic courtesy of kfog x), and the world will go on.  *****PLEASE NOTE THIS BEFORE WRITING ME: I don’t know why the beard is different on the kid, I have no idea. I’m just puttin’ it out there.

I think we’ll all remember where we were when we heard the news that Anna Nicole had died.  She was The People’s Train Wreck.  Myself, I was having a pint in a pub that stands above a plague pit in central London when my sister sent me a text with the news.  I was shocked, but not, if you know what I mean.  There was no way this woman could be dead,  and yet… 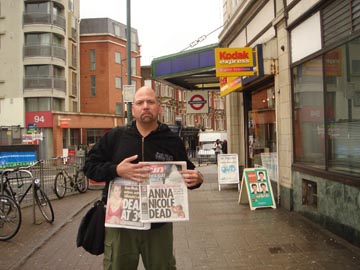 Later that evening, I got back to the computer and saw more emails about her than any other death, including the little Brandis creature.  It’s finally happened, the whole world has gone Death Hag.  Between her and James Brown, there has never been more coverage of a celebrity death – aside from the holy grails = Diana and JFK.  Remember, we’ve been doing this a long time – say what you will, but the media are jumping on OUR bandwagon.

Readers Digest version:  On February 8, 2007, Anna was found unresponsive in her room at the Seminole Hard Rock Hotel and Casino in Hollywood, FL.

From Find a Death friend Britt in Cincinatti:

“I was down in Hollywood FL with friends and stayed at the Seminole Hard Rock from 2/15 – 19.  As luck would have it, our rooms were on the infamous 6th floor (albeit way down at the other end, in the 640’s).

Even though Anna Nicole’s room had surely been gone over from top to bottom by then, the hotel kept an employee posted at the door 24/7, I suppose to keep people from making shrines or graffiti or worse… leaving teddy bears and flowers.

At any rate, I know how you like to post pics of celebs’ mailboxes and front doors… so here’s a cell phone-camera snap of Anna’s last hotel room door!” 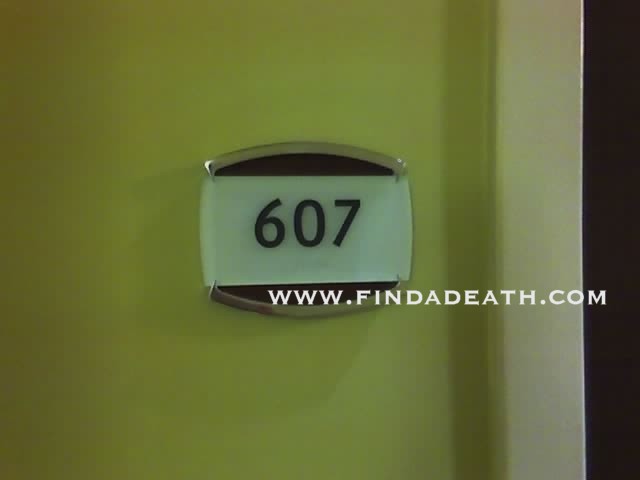 For which we are grateful.  Thanks Britt! x
She was taken to the Memorial Regional Hospital where CPR was performed on her.  This is where she died of pneumonia.

She was taken to the medical examiner’s office, where she was given an autopsy.  She was jacked up on methadone and painkillers, thus masking the symptoms of the pneumonia, so it went untreated.  Very Jim Henson. 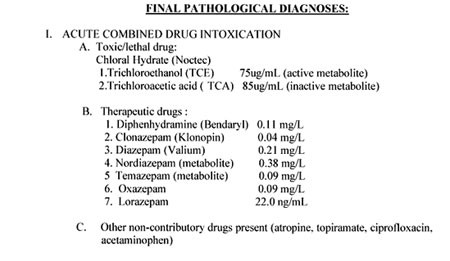 Thanks to all my friends that sent in that information – to make Find a Death more accurate.

Upon the announcement, Trimspa issued this statement. 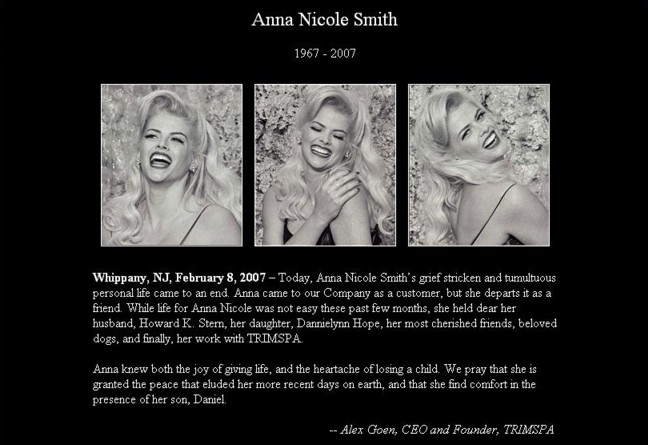 I would love to have been in on that meeting, when they found Slimfast in Anna’s fridge.  My thought is that Trimpsa may have jerked Anna around a bit, and her lawyer Howard K. Stern put the Slimfast in the fridge as a final EFF you to Trimspa.

While the entire world watched, there were fights about what to do with Anna’s remains.  While Anna lie rotting at the Medical Examiner, her mother, a trick she had once, and her smarmy lawyer – all fought over what to do with her body.  Mom wanted a Texas burial, Stern wanted the Bahamas and Trick wanted LA.  I personally wish she was coming here to LA, it seems like it’s what she would have wanted — Burial at Westwood near Marilyn.  It still may happen, as I type this, the father of Daniel is filing a suit to have the boy exhumed and buried back in Texas.

That judge. There is no good reason that man is sitting on the bench, except to make this freak show, more freakier..   Where IS Judge Judy when you need her?  She would so have whipped those people into shape.  We heart Judge Judy.

Anna remained at the Medical Examiner until this morning – when she was taken to the airport, 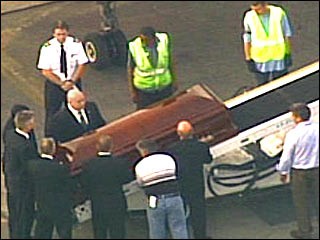 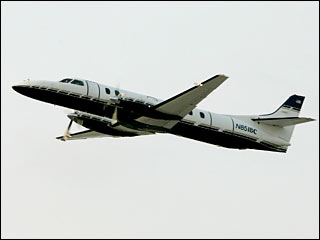 and flown to the Bahamas for burial. 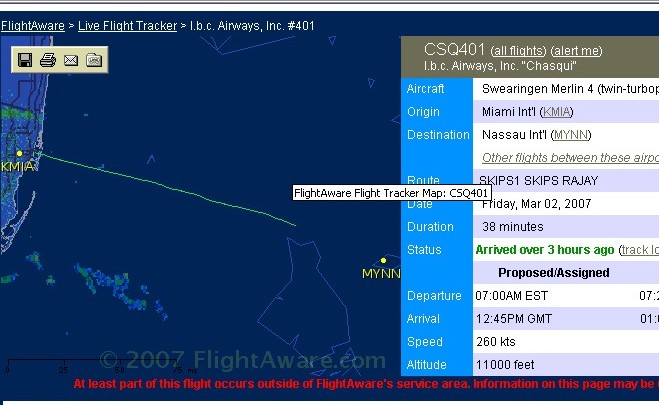 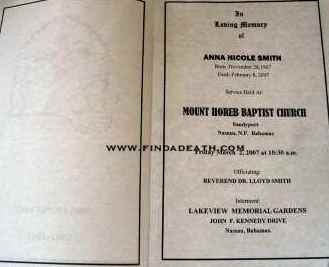 is being held this very minute at The Mount Horeb Baptist Church, where 300 guests (including Slash) mourned her. 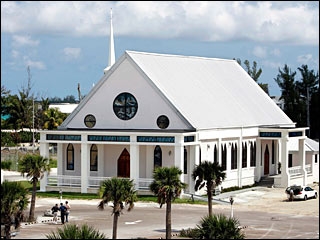 Pallbearers in black suits with pink ties carried the mahogany casket, draped in a pink satin cloth with ribbons and feathers. 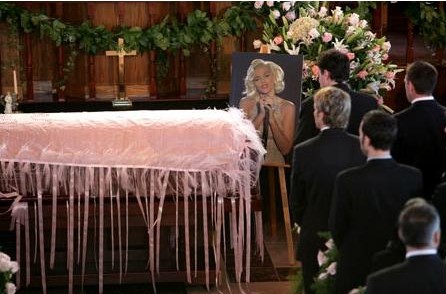 Smith’s name was spelled out in Texas-influenced rhinestones.

Anna is wearing a pink gown and a tiara, forever.  The designer refused to release details of the gown, because some things should remain sacred, you know? But you can see it here. 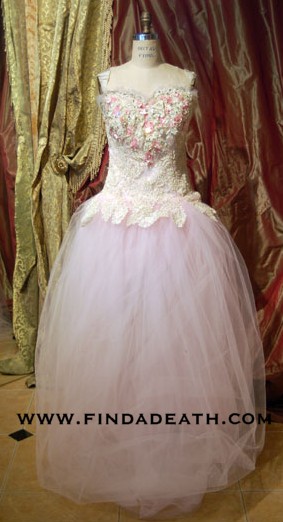 The service was broadcast live by Entertainment Tonight.

She is also buried with the ashes of her late husband, J. Howard Marshall.

Anna was then taken in a pimped out white hearse, to the Lake View Cemetery, where she is being buried. 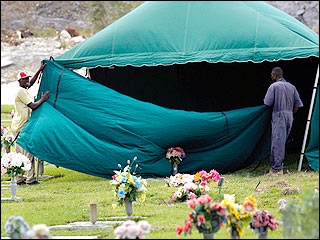 There is not one singular respectable human being involved with this case, especially Howard K. Stern who the term “smarmy git” was invented for.  I do kind of like the Birkhead trick person.  He seems sincere to me.

Anna is often compared to Marilyn Monroe. Wrong.  Not even close.  Sure, Anna slept in the same bedroom 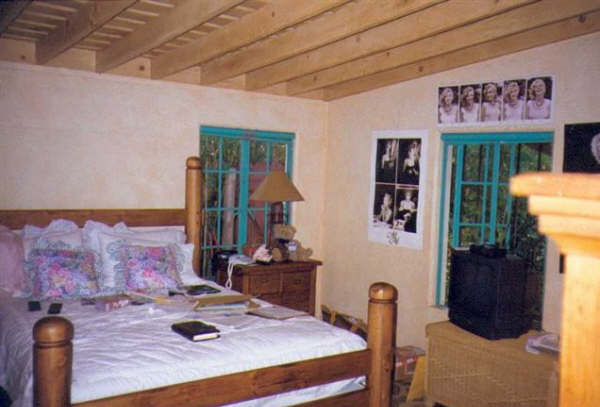 that Marilyn died in, 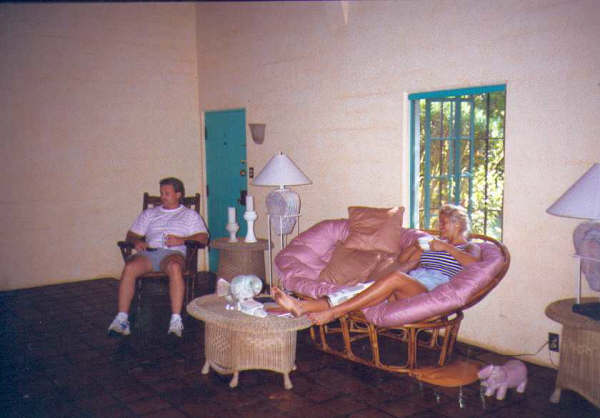 and they were both Playboy models.  The thing they really had in common was being used, taken advantage of, shat on and spat out.

From Mark and James in Canada:

Anna’s billionaire hubby J. Howard Marshall leased the 12305 5th Helena Drive house for Anna Nicole in 1994-1995. She actually purportedly had an o.d. while living there and thought MM was reaching out for her from the walls and mirrors (big National Enquirer story about it back in the day). The pics were taken by a Marilyn fan who loitered outside of 5th Helena…Anna invited him in, and on his website (where the photos originated) he said that Anna was very nice and enjoyed showing the house off to other MM fans. Anna had also toyed with the idea of asking J. Howard to buy Jayne Mansfield’s now demolished Pink Palace for her after she shot a Playboy spread there, but Engelbert Humperdinck (who owned it at the time) wanted too much moolah for the place.

As Anna once famously asked, “Do you like my body?”  Well, if you want to see Anna’s body, you can, if you click (Warning! Dead pic) here.  If you don’t, I would advise you not to, and don’t come screaming to me with your pants around your ankles, if you do.  So many nice people have sent those pictures to me, and I do so appreciate it, but the first was my buddy Nate at RockyRadio.  Thanks, Nate.

To those who doubt the authenticity of the death photographs, my buddy Steve Goldstein of BeneathLosAngeles.com sent me this from today’s NY Post:

March 3, 2007 — DESPITE the National Enquirer’s claim that the eerie post-mortem images of Anna Nicole Smith it published were “photo re-creations based on eyewitness accounts,” a source close to the magazine says they were the actual photos of the Playboy playmate’s corpse lying in a Florida mortuary. “We didn’t want to get anyone fired,” an Enquirer operative told The Post’s Braden Keil. Someone with access to the refrigerated drawers scored a big payday after pulling out Smith’s pre-embalmed body and unzipping the body bag for an Enquirer photographer to hurriedly snap her bluish face.

Of course, several unqualified people are spouting off about her, such as Donald Trump.  This time I happen to agree with him, when he says he doesn’t like Howard K. Stern, and Stern is probably not the babydaddy.

John Travolta took a dick out of his mouth long enough to issue this statement that Scientology could have saved her life.  This from a man who’s religion claims they can cure homosexuality.  Or can they?

I will very much miss the overweight ridiculous Anna Nicole Smith.  She was a guilty pleasure, and I hope she finds some sort of peace.  ALSO, I hope if ghosts do exist, she finds a way to scare the shit out of that Stern guy, every single night for the rest of his life.

According to my buddy Mark Langlois, the house on the Anna Nicole Smith show was being leased for $7000 a month (with 39 household members).  Mark got me the address, and I found it way in the hills.  I know those hills pretty well, I could never ever find it again without my trusty bitch in the box – my GPS system.  It gets better though, Mark’s friend James in Canada writes, “On 4/11/2005, the house of Anna Nicole Smith, located in Studio City, CA was purchased by Vickie Lynn Marshall (aka Anna Nicole Smith) for $1,335,000.00. On 4/11/2005 the Grant Deed was in Vickie Lynn Marshall’s name.”

It gets better, “Anna Nicole Smith’s longtime companion, attorney Howard K. Stern, oversees a corporation that was allegedly set-up to manage Anna Nicole Assets. Anna Nicole is/was the President of “Hot Smoochie Lips Inc.” and Howard K. Stern was also an officer. Since Stern is the only surviving officer of the company, he doesn’t have to wait to control any of the assets.”

Anyway, thanks to Mark and James, we now can see Anna’s house, 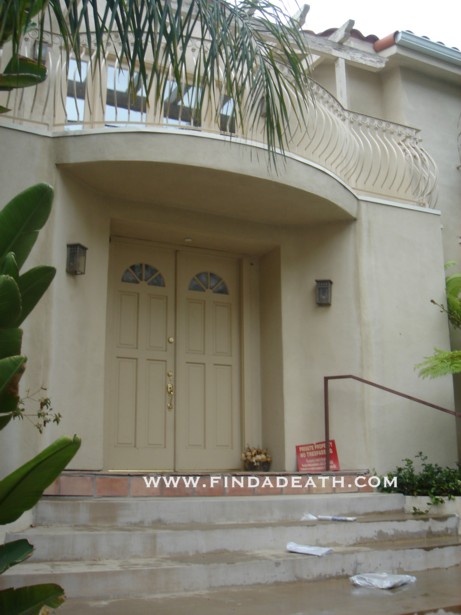 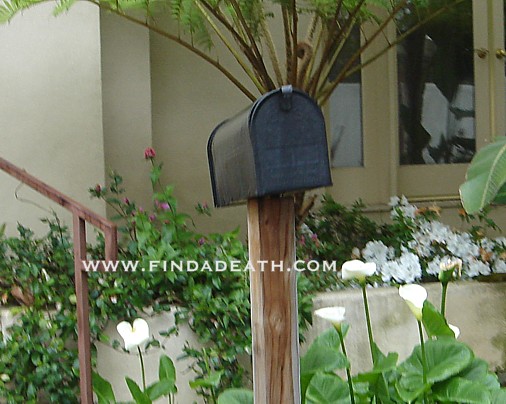 From Findadeath friend Sheila Sisk:  I went to big ol’ Mexia and Jim’s Crispy Fried Chicken (where Anna had her first job) and it’s still kickin’!  It was VERY crowded and has an old school pick up menu and a dine-in area, but no public restroom, go figure.  It actually smelled pretty good, but I didn’t get a sample for various reasons.

Not a classy joint – you can tell it hasn’t changed in a VERY long time. I can just picture ANS fry’n up some chicken legs and getting freaky with Daniels Daddy behind the building on a smoke break.  Thanks Sheila for the snappy snap, and for making us proud!

Update February 2015:  Last October we visited Jim’s Crispy Fried Chicken. The ladies working there were terrific friendly, but neither of them worked there when the legend did. When I asked what people have to say about Anna Nicole, the response was, “not much.” I’m guessing not a lot of community pride. Fuck them. Anna was a STAR. 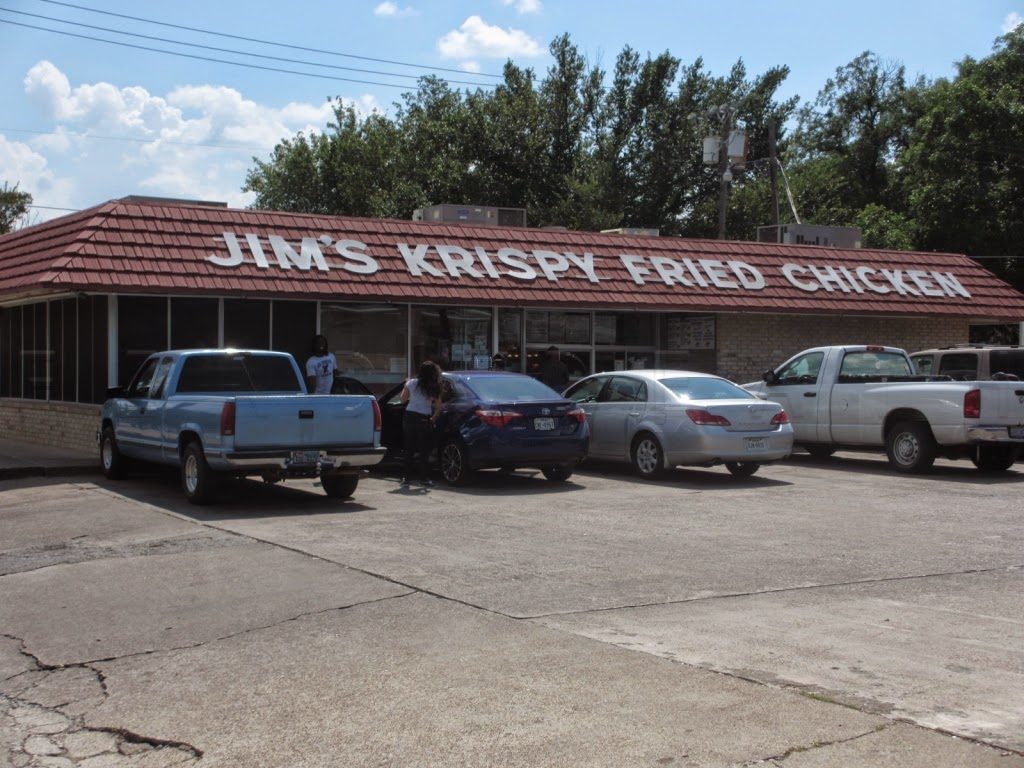 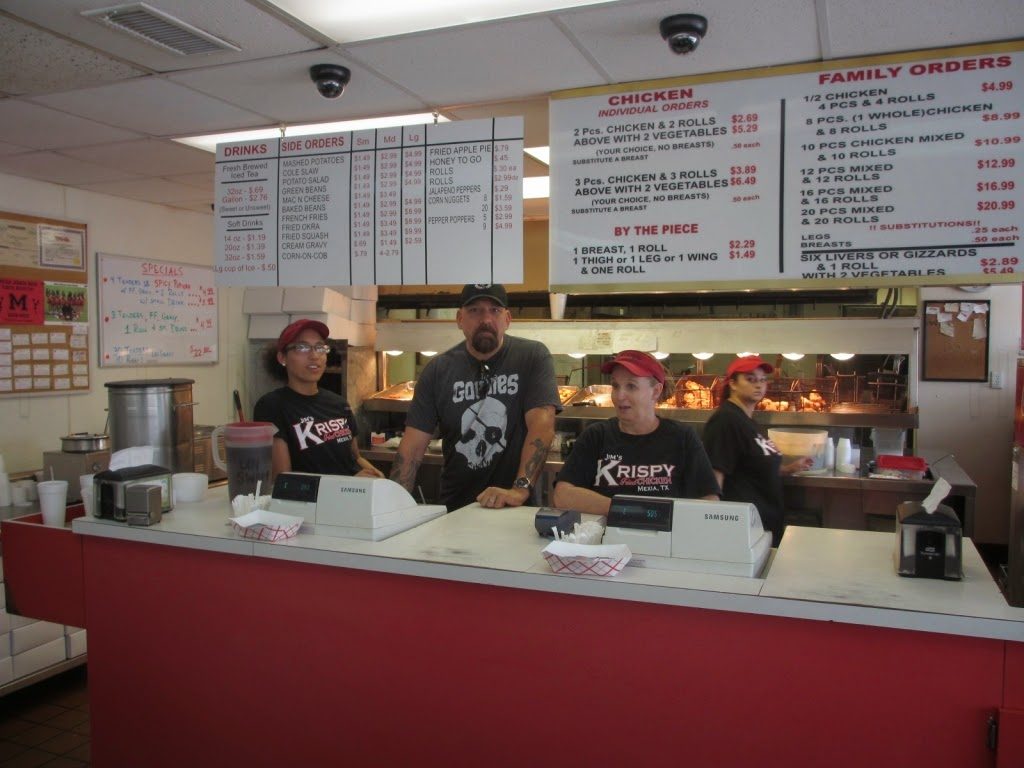 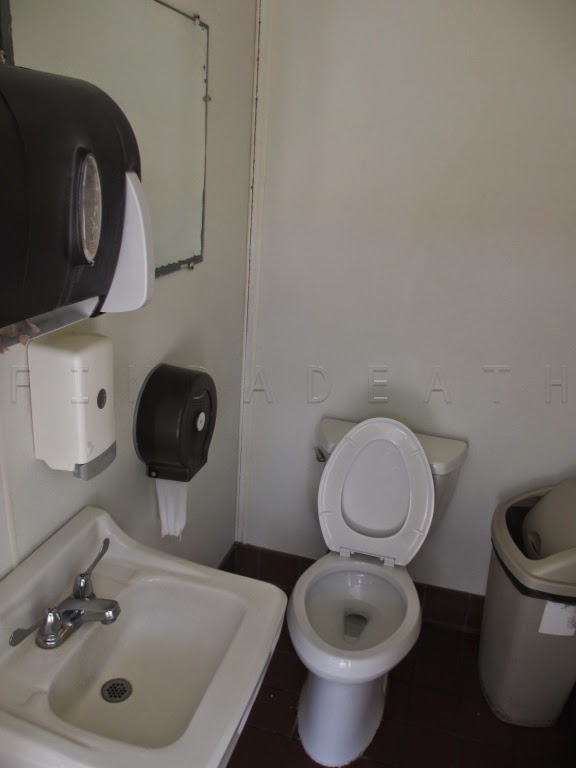 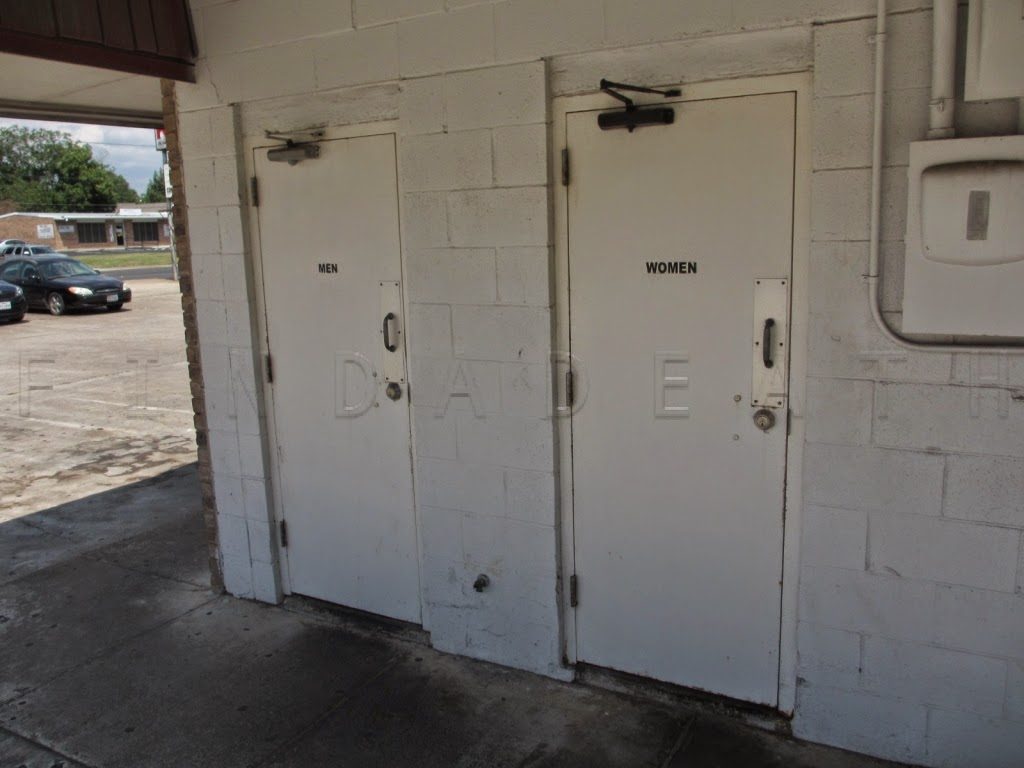 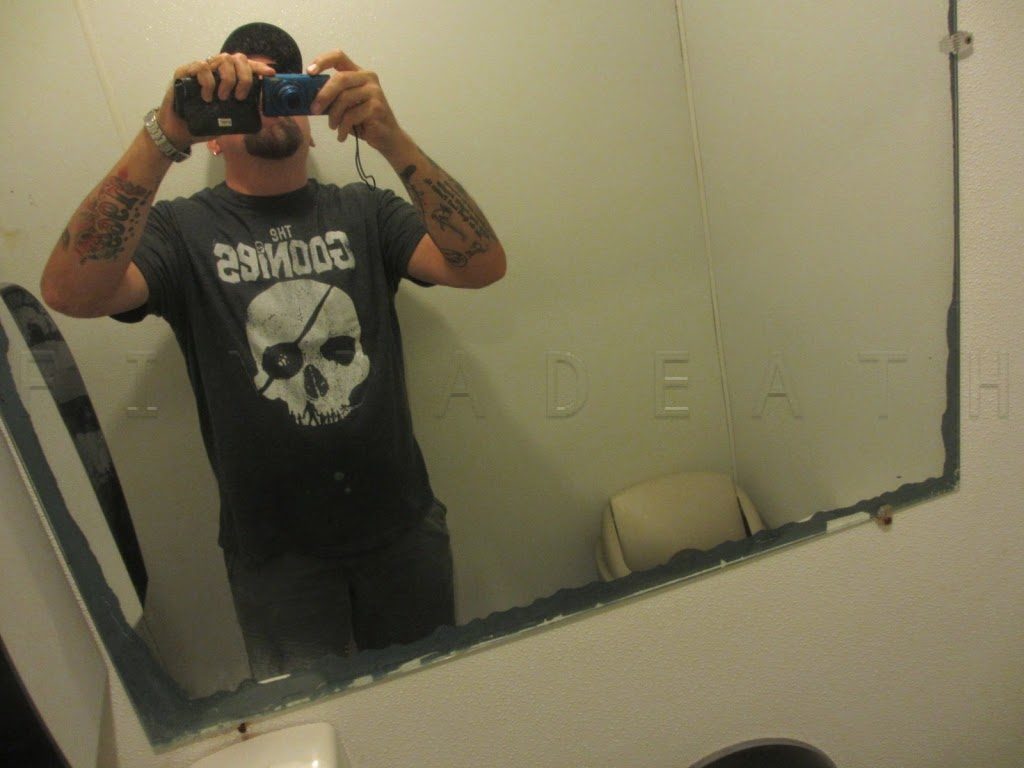 Thank you, Lisa Burks. Thank you Joey Pomales for the plane/cemetery info.  Thank you, Nate and Harry.  Thank you, Michael for the Marilyn home pictures.  Thank you, Jay Porterfield for furnishing her death certificate.

Rest in Peace, Anna.  It was a good show.