The name of my condition is Cartilage Hair Syndrome Hypoplasia, but you can just call me Billy.
The general public thinks all little people are in circuses or sideshows. We have doctors, nurses, just about every field covered.
We are people with all the hopes, dreams, passions, and faults of everyone else. Eighty percent of us are born into families with no history of dwarfism.
Try being my size and going into a public restroom.
Show More Quotes
Show less

Billy was born William Job Bertanzetti in Pennsylvania in 1924. His parents were average sized. For a little guy, he sure overcame a lot of obstacles. Makes me think how lucky and lazy a lot of us really are. At his tallest, Billy was 3 foot 9, and a stone cold fox.

Billy’s dad got a job as a machinist for Columbia pictures, and the family moved out to the West Coast. Billy had a terrific personality, and was a genuinely nice guy. It wasn’t long before his unusual looks landed him parts in a few films. He found steady work after that, but decided to chuck it all in,and go to school to become a sports journalist. After graduating, he returned to the business, and with television being the big thing, he found even more work.

While constantly finding work, Billy also found time to start up several groups to bring the needs of “little people” public. His condition was called Cartilage Hair Syndrome Hypoplasia. Billy founded the Little People of America and the Billy Barty Foundation, which provided scholarships for other little people.In addition to having a kids show called Billy Barty’s Big Show, Billy appeared in a slew of Sid and Marty Krofft shows, Get Smart, The Waltons, Peter Gunn, Barney Miller, The Golden Girls, Frasier, and a couple of Elvis flicks. In fact, if you want to know more, check out his listingon the IMDB.

Billy lived in Studio City, in this nice house.

In May of 2000, Billy was injured when he fell off his scooter and fractured his eye socket. He had also had hip replacement surgery. “I feelgood, I just look horrible.”I met Billy in 1995, and I can say he was a real sweet man. We talked for quite a while about his vaudeville career, and the Krofft shows. Then,occasionally I ran in to him afterwards, and he always remembered me, and was always super nice.Billy died in the Glendale Memorial Hospital of heart failure Saturday December 23, 2000 at 9:22 am. He was married to Shirley,and had a daughter named Lori and a son named Braden. Merry Christmas.

There was a memorial service on Wednesday the 27th at the Church of Jesus Christ of Latterday Saints in North Hollywood.Billy was cremated and is buried in Forest Lawn, Glendale. 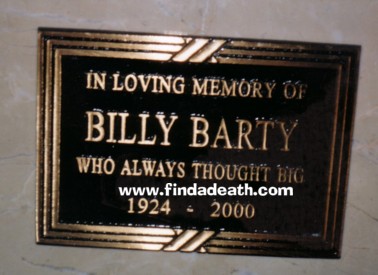 Thank you to Roger Sinclair for the grave photo and Mike Steen for Billy’s death certificate. As usual, you guys are terrific!