Charles was one of the foremost drag queens of our time. Only second best to the wonderful Divine. His impersonation of Bette Davis was legendary. In fact, it was rumored that Bette was unavailable for some reworking of her lines in a film, and Charles was brought in to do the job. Don’t know if it’s true, but was a great rumor to have to your credit.

This in tow, he hated to be referred to as a “drag queen,” but as an actor. He once said, “I’m not doing it to be a woman. I’m doing it to be a star.” He shed his female clothing immediately upon leaving the stage, not wishing to “become the Liberace of the drag queen world.”

Towards his later years, Charles lived on Cartwright Avenue in North Hollywood. 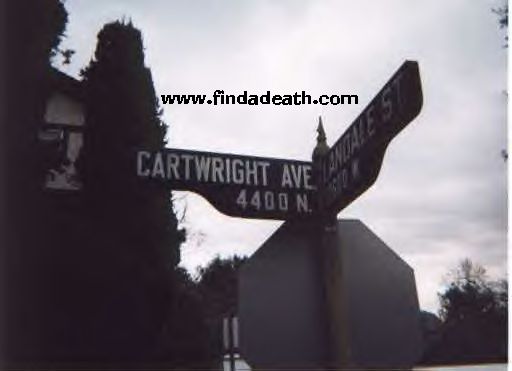 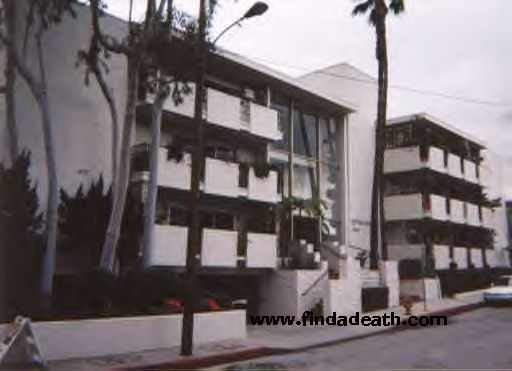 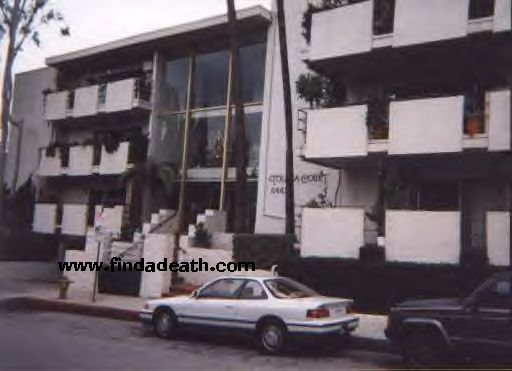 I thank Findadeath.com friend Chad Jones for those pictures.

In 1997 – he was diagnosed with prostate cancer. 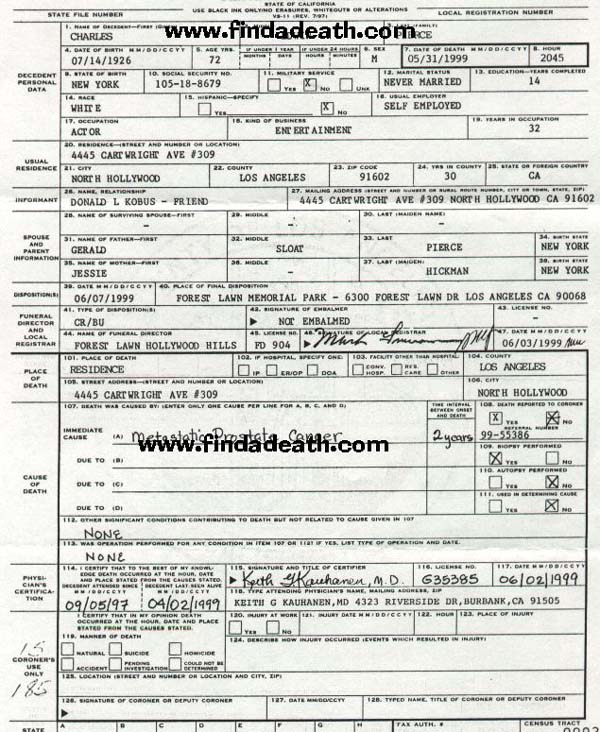 Charles’ funeral was held at the Church of the Hills, in Forest Lawn Hollywood Hills, on June 19, 1999. He meticulously orchestrated the event, before he died. Conrad Bain spoke, as did Michael Kearns, Ted Reid and Allan Byrnes. Bea Arthur (his closest friend of 20 years) sang, accompanied by a harp.  My friend and Findadeath.com friend Steve Smith attended the services – and provided us with this funeral program.

Of the service, Steve says, “Michael Kearns was a bore, Conrad Bain was a delight; Bea sang just a verse from a song and was given a resounding ovation (I don’t remember what song she sang from); and Jackie Altier sang “Smilin’ Through” an old hit of from the 40’s ; rather she screeched it.  Besides Bea, Rip Taylor, Carole Cook and if I’m not mistaken, I vaguely remember queer Michael Jeter.

Oh, at the graveside service, yellow roses were handed out and I stood next to Bea.

According to Bea, there was not a dry eye in the house. She also said that the service was videotaped, and she said it was, “The best funeral video ever.” She still gets pretty choked up when you mention his name. Interestingly, there was a mention in one of the tabloids about Bea consulting a psychic to get in touch with Charles. When I asked her, well, disgusted ain’t the word. She denied it profusely.

He was cremated and his ashes are in the Columbarium of Providence, at Forest Lawn Hollywood Hills.

Trivia:  If you ever saw the film, Torch Song Trilogy, it was Charles that played “Bertha Venation.”  He also appeared in that Joan Rivers travesty, Rabbit Test, and on episodes of Designing Women and Laverne and Shirley.

Findadeath.com friend Beca sent this picture of Charles and Dorothy Lamour.  Out of drag.  Charles, that is.  Thanks Beca!

This just in, January 2004, from Findadeath friend KR Larkin: Scott, I met Charles Pierce when he returned to his hometown of Watertown NY on a visit in the early ’70’s.

He appeared on a local cable access show, since he was considered to be quite the big time celebrity.  (Watertown has expanded it’s claim to celebrity since, with the Badalotto brothers on the production end, actors Richard Greico, Mary Margaret Hume, and founding members of Blue Oyster Cult, Al and Joe Bouchard.  But I digress.

Charles’ appearance on the local show was quite a stir for the small time tv studio.  He was simply amazed at the low key hokiness of the cable tv studio.  He obviously had worked in bigger, more glamorous surroundings, and yet he was completely professional, and funny as hell.  He was, well, weird, and had put a lot of distance between him and small town northern New York.

He appeared as himself, dressed to the T, and I’ll always remember his purple suede shows.  And his great sense of humor.

You got one weird site there Scott, but what the hell, it’s a free country.  At least for a while yet. KR in SC

Thanks for the info, KR!

One thought on “Charles Pierce”