Joan Marie Laurer was born in Rochester NY and had two older siblings, Kathy and Sonny. Her parents divorced when she was 4, and a succession of stepparents followed. Joanie took up playing the violin and cello. She began working out as a teenager, and focused on health after a surgery to remove an ovarian tumor. She finished her last year of high school in Spain and chose Spanish literature as her college major. She was fluent in Spanish, French and German.

Joanie graduated University of Tampa in 1992, lived in Guatemala after joining the Peace Corps, and then returned to the States where she worked as a cocktail waitress, pager salesperson and belly dancer. By 1996, she was in Manhattan and entering fitness competitions.

Under the tutelage of trainer Walter “Killer” Kowalski (at his wrestling school in Malden, MA) she would become a pro and win the Independent Wrestling Federation’s women’s title in 1996. Joanie made her WWF debut in 1997 as a “diva bodyguard” for  wrestler Triple H and would help her man win through nefarious methods (smacking his opponent’s groin), which made the fans go wild. 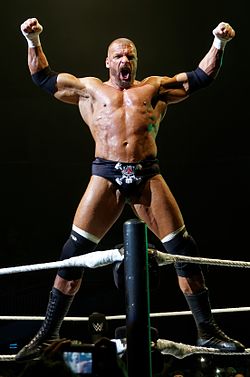 It was not long before Chyna was a star attraction in the ring, becoming the Intercontinental Championship title winner billed as “The Ninth Wonder of the World” (Andre The Giant was the 8th wonder). Her strength and bouts against the men of WWF kicked down gender barriers and made her a trailblazer in sports-entertainment. Besides beating men for the prized belts, she was the first woman allowed to battle for King of The Ring at The Royal Rumble. Vince McMahon Jr., CEO of WWF, heavily promoted Chyna in his roster of talent, along with The Rock, ‘Stone Cold’ Steve Austin, Chris Jericho, Shawn Michaels and Triple H (real name: Paul Levesque). The latter would become Chyna’s lover for about 5 years. 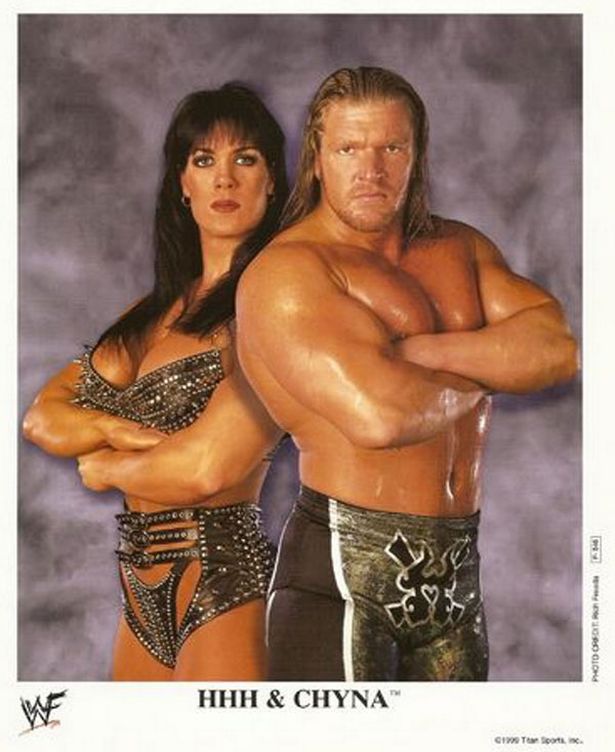 “I had to be this aggressive athlete. I had to look tough and try and look pretty, and have hair & makeup and a little cleavage at the same time.”

Chyna posed nude for Playboy in November 2000, and appeared on late-night talk shows and released a NY-Times best-selling autobiography called If They Only Knew. In 2001, while Chyna was a household name and reigning champion, she was released from the WWF after a reported contract dispute. WWF became WWE the next year, and Chyna never wrestled for the organization again. 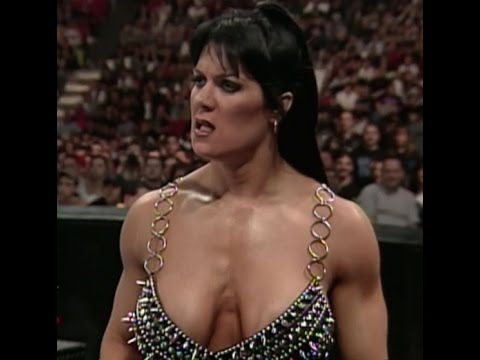 Chyna’s version of the story was that she was forced out when the Boss’s daughter, Stephanie McMahon, fell for her boyfriend, Paul (Triple H). Chyna told friends she found a love letter from Stephanie to Paul in his briefcase. Chyna saw that Paul was growing closer to Stephanie (the couple eventually married in 2003) and she was crushed. Chyna told Twitter followers, “I was near the end of my contract…so basically he (Vince McMahon) never re-signed me. He chose his daughter’s happiness over his Talent and maybe he should have. But this was business.” She wondered why she couldn’t have been retained as a trainer for new talent or some job in the organization where she would never have to deal with Stephanie?

Reportedly, the notice of her being dropped came unceremoniously by fax. The WWE later said the parting of ways was strictly financial with Chyna refusing to accept anything less than a starting base salary of $1million – after being offered $400,000. Some in her circle wondered if seeing her relationship fall apart (her sister said she didn’t want kids, and he did) and then knowing the ‘other woman’ within the company made Chyna more aggressive in her negotiations?

Years later, her estranged sister Kathy would tell a publication that Joanie regretted her role in the breakdown with her employer. Kathy said, “The WWE was the only place where she was ever accepted. Once she lost that, she fell into a hole. And she never could climb out of it.”

With wrestling’s biggest female star jettisoned by her company, Joanie started trying to rebrand herself as ‘China Doll’ while legal matters of trademarked names were being sorted. She began regularly appearing on the Howard Stern radio show, with many appearances filmed for On DemandTV. She would get topless on occasion and ramble about her career. She told Stern once that she never took steroids because she wanted to keep a small waist line. She also told Stern she loved cocaine, but could live without it. 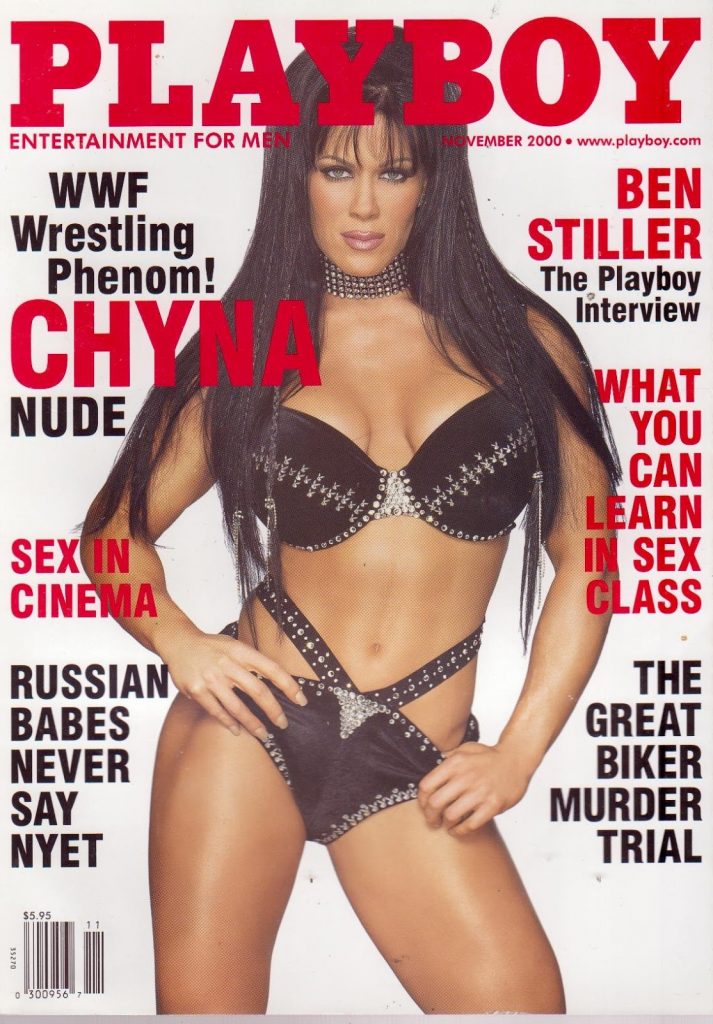 Joanie posted for Playboy again in 2002 and tried her hand at Japan Pro Wrestling, eventually leaving to pursue acting. She appeared on TV in Hollywood Squares, Sabrina the Teenage Witch and The Nick Cannon Show and acted in indie films like Alien Tracker ( 2003). 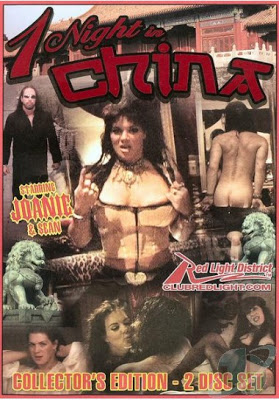 With the amount of steroids she took, certain parts of her grew so much that there were rumors she was a hermaphrodite.  She was not a chick-with-a-dick, it just looked that way.  I suppose that was some sort of phobic.  Whatever.  But google it if you want to see.  She had a big one.

By the 2010s, Chyna (using her old moniker again) found Twitter and YouTube to be a great place for her late-night and early-morning rants about her WWF betrayals and boyfriend problems. For three decades, Joanie remained estranged from her mother Jan. They rekindled their relationship in 2013 but Joanie struggled to stay connected. While Joanie was rehabbing in Nevada, her mother reportedly sent an email telling her to ‘Get away from this Chyna persona – just be Joanie…don’t go back to Los Angeles…with these same people again and go downhill.’

“Happy Sunday my lovelies! I hope you all enjoy your day with your family.”

A few days before she died, Chyna posted a 13-minute video on YouTube called  ‘Wake Up!‘ in which she makes a green drink smoothie, gulps vitamins and sings the lyrics to the novelty song: ‘Fish Heads’ ( Roly Poly Fishheads, Eat Them Up, Yum’. In the video, she also laments that her healthy food delivery business idea has hit a legal snag. Near the end, she shows viewers her ocean view from her balcony and asks ‘How lucky am I?’ 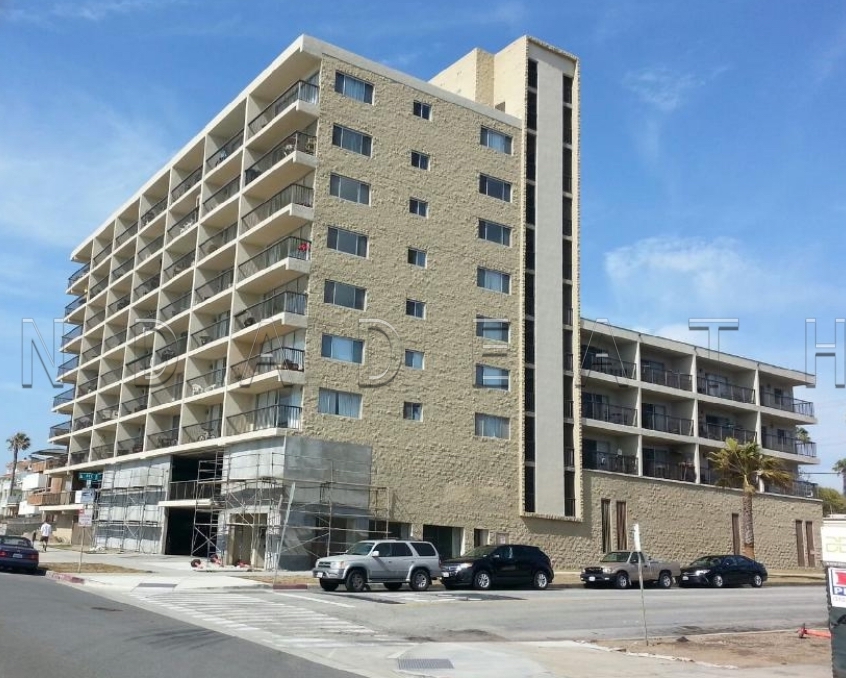 Three days went by and her manager, Anthony Anzaldo, noticed she had no social media posts and wasn’t answering calls. Police were called to Chyna’s home where she was found dead on her bed on Wednesday afternoon April 20 2016. Chyna was gone, at age 46.

She was lying on her right side, and her head rested on a stack of pillows. A pool of blood and foam that came from her nose was on the pillow under her face. She was wearing a black tank top and multicolored patterned pants.

After her autopsy, LA Coroner ruled her death was caused by a lethal mixture of alcohol and prescription drugs (relaxants: valium, nordiazepam; painkillers: oxycodone & oxymorphone, and sleep aid: temazepam). 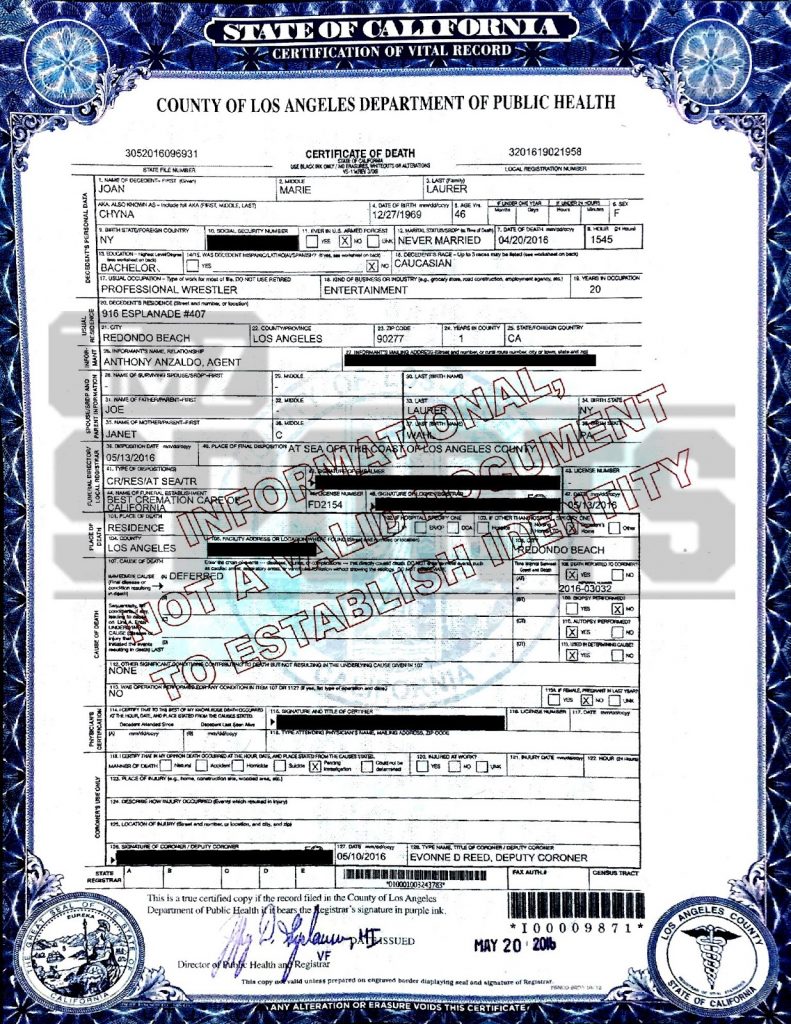 Her brain was donated to study the effects of CTE, chronic traumatic encephalopathy.

When the news of her death reached the Internet, fans and colleagues came forward with their tweeted condolences about their kind, sensitive, loving friend.

Dennis Hof, owner of the Bunny Ranch brothel, remembered her as “…more sensitive than anybody I ever knew. I’ve seen her crying over things people would say about her: that she was manly, that she was a transvestite…she would break down over that. She’s not as tough on the inside as she was on the outside.”

She really did seem like a pinball, bouncing from one thing to the next just to survive.  Girl had issues.

Stephanie McMahon Levesque, now the Chief Brand Officer of WWE, tweeted on 4/21/16:
I just heard the tragic news that @ChynaJoanLaurer has passed. She was truly a pioneer in our industry, and she will be missed. #RIPChyna

Joanie Chyna Laurer was cremated, placed in a rhinestone urn. 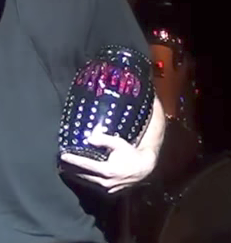 A Celebration of Life memorial was held for Joanie on June 22 at Redondo Beach Performing Arts Center and featured cello music and videos of her happier times with friends. Coolio and her ex-boyfriend Sean ‘X-Pac’ Waltman attended and spoke of their friend. Greg Brady was there too.  Two-and-a-half hours.

Her cremains were scattered in the ocean not far from her Redondo Beach apartment. The scattering was filmed as part of a documentary being produced in her final months because of course.

After Chyna’s death in 2016, her mother Jan began controlling her daughter’s social media accounts. She kept the Twitter account open for fans – but deleted all of Joanie’s personal tweets. One post told followers bringing up old wounds that the family had made peace with Triple H and WWE. 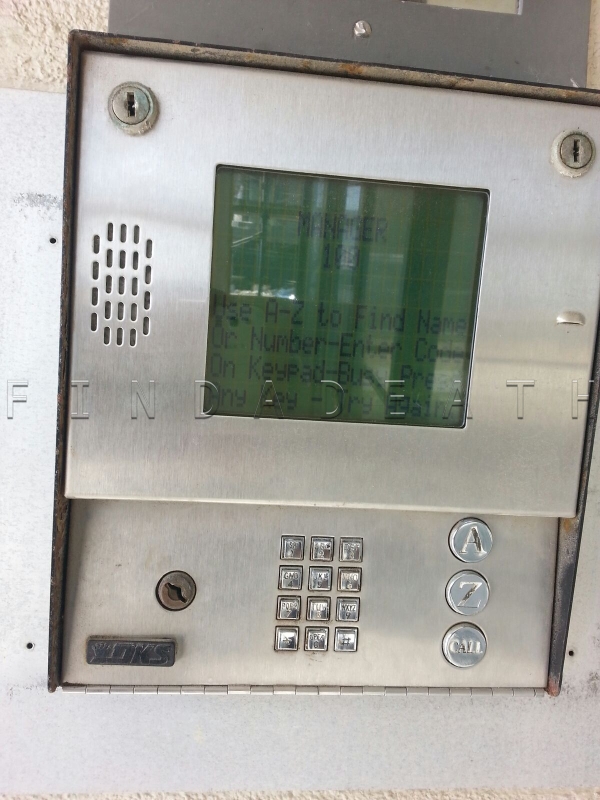 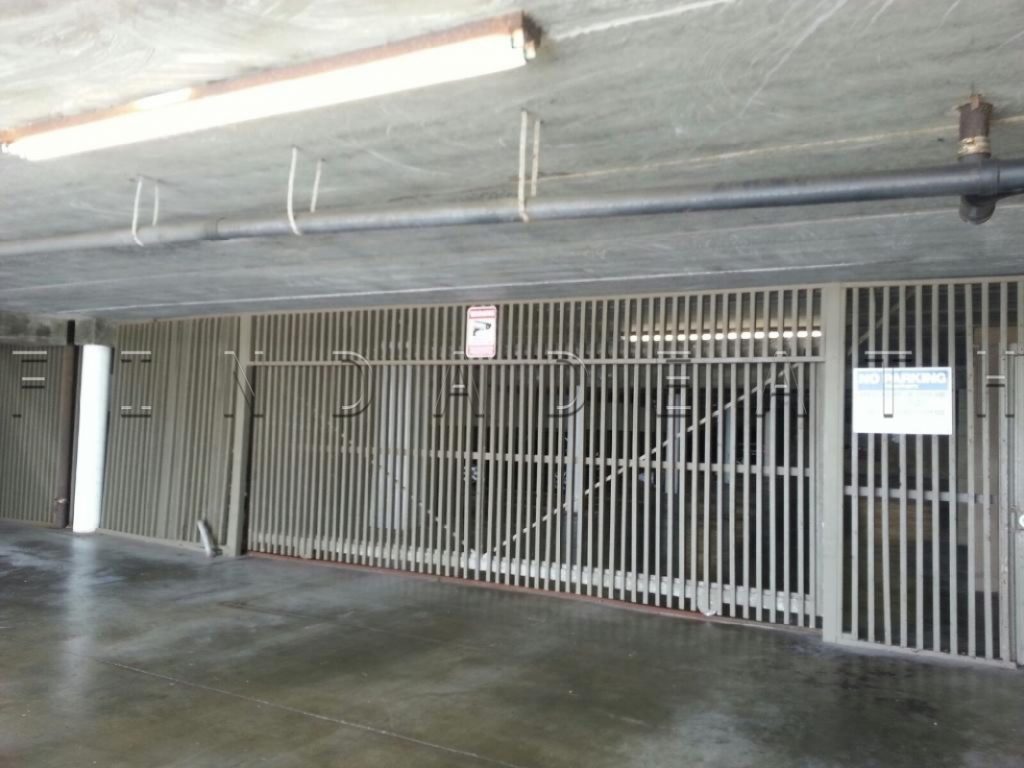 I wish she lived long enough to sue that other Chyna creature for copyright infringement.