If something is bothering you, keep it to yourself.

David Strickland was not only a relatively successful actor, but also he was Brooke Shields’ verybestfriendinthewholewideworld. He was manic-depressive too. Do they go together? I remember a story from about 13 years ago- Brooke was in a restaurant in Charlotte, NC, when a fire broke out. The place was evacuated, and Brooke commented, “I love trauma. I feel closer to you all. We’ve bonded.” Open mouth and insert finger down throat. Strickland played Todd on Brooke’s show, Suddenly Susan.

He was also in the film Forces of Nature, with Best Actress Oscar winner Sandra Bullock.

On Sunday, March 21, 1999, Strickland was in Las Vegas for whatever reason, and was seen with his buddy, Andy Dick, at 1 a.m. in the Glitter Gulch strip club, where he had a private dance from stripper, Kimberly Braddock. 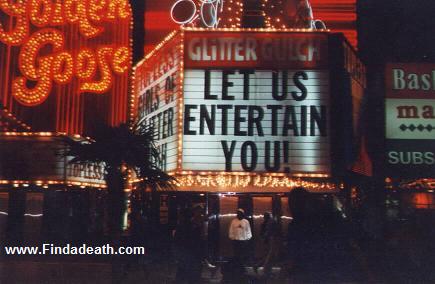 After he left the strip club, he checked into the sleazy Oasis Motel on Las Vegas Blvd., just north of the Stratosphere Tower. 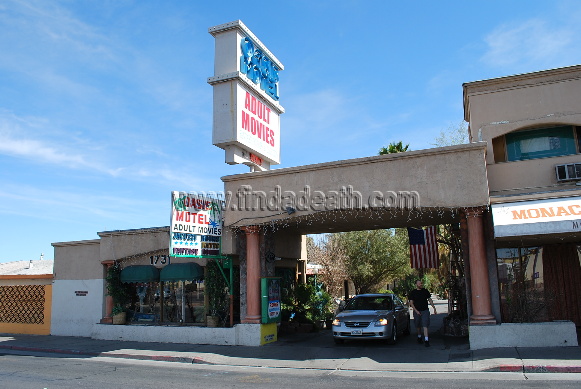 It cost $55 a night to stay in this dump, and Strickland put it on his AMEX card. Motel owner, Peter Napoli, said that Strickland was alone when he checked in between 3:30 and 4 a.m.  It’s hot. 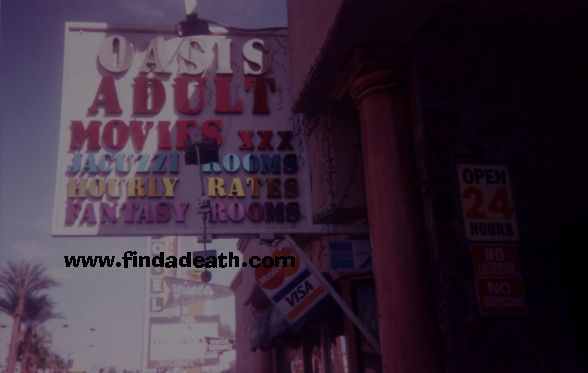 After he checked in, he went to the local 7-11 and bought a six pack of Coors. There’s some product placement for you.

This is where the information gets sketchy. Is it true? A woman said she saw Strickland shortly after midnight (that makes no sense) when he wandered into the motel’s parking lot courtyard. 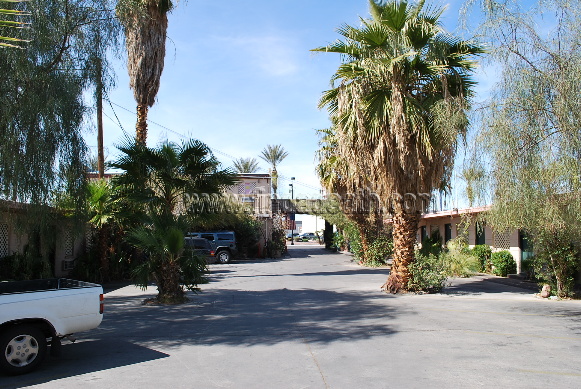 She asked who he was, because she thought she recognized him. He didn’t talk much. She couldn’t get him to tell her who he was. (Oh, Hi! I’m David Strickland fromSuddenly Susan, the TV show? Have you seen me? I love staying in this flea pit sleazy dive that oozes STDs. I’m a best friend of Brooke Shields. Would you like the number of the National Enquirer or The Globe? How about Brooke’s?) His expression the whole time was blank. Not happy, not sad. The two went into the woman’s room for about 20 minutes (oh my), then walked out and began to go their separate ways. He turned to her and said, “Some important changes are going to happen in your life.” (no you.) 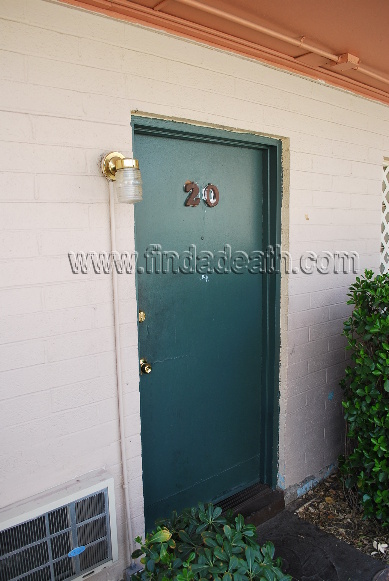 After he drank the beers (we all have our priorities), he put the empty bottles by the nightstand. He then tied the white king size bed sheet into a noose, and threw it over the ceiling beam. He climbed on a chair, put the noose around his neck, and stepped off the chair. His death outfit consisted of blue jeans, a khaki shirt, socks and black high top tennis shoes.

When I was there recently, room 20 was occupied, however room 21 was open, so I had a peek. 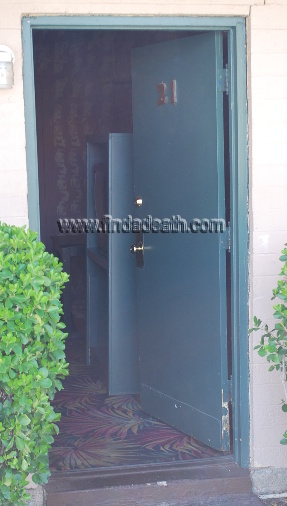 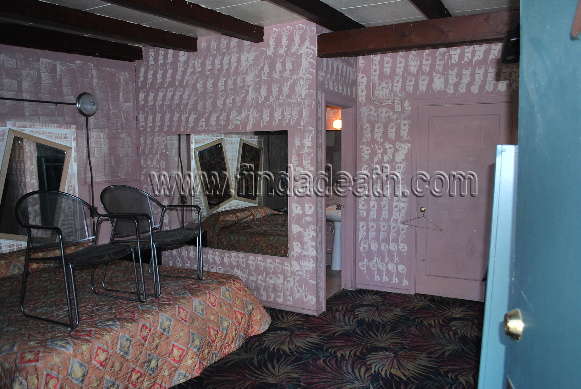 When he didn’t check out by 10:30a.m. on the morning of the 22nd, they phoned his room twice. After no answer, an employee went in to the room with the master key, and found him hanging there. I’ll bet she thinks twice before doing that again. She freaked and ran to the office, where an ambulance was called. Paramedics arrived on the scene, cut him down and unsuccessfully tried to revive him.

A bit of history: He was arrested in October for cocaine possession and was scheduled for a court mandated progress report hearing in LA on the day he died.

Find a Death friend, Spyrogirl, sends us this:  When Strickland failed to make a court appearance March 22 relating to a prior crack-cocaine bust, Suddenly Susan star Brooke Shields hired a private investigator. The gumshoe quickly tracked down Strickland to the Vegas motel room. Andy Dick, now in rehab himself, was contacted by authorities to help
ID the body, via a photograph.

The funeral was held at Forest Lawn Glendale. Brooke was there, as was Judd Nelson, Juliana Margulies (whose dad wrote the plop plop fizz fizz jingle), and Strickland’s girlfriend, Tiffani-Amber Thiessen. The family splashed out $428.00 for security at the funeral, which had to be claimed from David’s estate.  He was cremated, and his ashes were given to his family.

Of course with television being the most conscientious medium, for the season finale onSuddenly Susan that May, they did a dramatic “Todd dies” episode that turns the Strickland character into a deity.

Trivia: Whatever you do, don’t become friends with Andy Dick. He counted Phil Hartman and Chris Farley and Mr. Strickland as three of his closest friends. He was with Strickland the night before he died, he was supposed to take Hartman’s wife to AA (whoops.) and he was in Chris Farley’s rehab group.

November 2009 – my pal, Joe Oesterle, sends this:  I went to the motel room he hung himself and the janitor shook when he told me he hears “Help me” every night between 3  and 4AM (roughly the time police figure he hung himself.)  oooweeeeeeeeeooo…

More, March 2002 from Find a Death friend, Gael:  My dad died on X-mas of 2000, so we decided to have the funeral at Forest Lawn, Glendale, and while we were making the arrangements they showed us samples of programs that we could use.  Well, David Strickland’s happens to be one of those samples. It is a very plain, in fact the cheapest program I have seen.  I kick myself for not snagging it for you, but I’d thought I’d let you know his funeral program is being used as a sample.

Gael, its nice to know that even in gloomy periods, people will think of Find a Death.  I appreciate it, and offer my sincere condolences.  Scott

By the way, you can request and stay in the room he died in.  Or room # 2 where another death (murder) allegedly occurred in 2008.  I would just recommend bringing a bottle of RID.

A very special thanks goes to Doris Hackett who provided the original photographs for this story.  Death Hag Jr. helped me retake them in Vegas this week.