I was the first home-grown sex symbol, rather like Britain`s naughty seaside postcards. When Marilyn Monroe`s first film was shown here [The Asphalt Jungle (1950)], a columnist actually wrote: `How much like our Diana Dors she is`.

Diana Fluck was born on October 23 1931 at the Haven Nursing Home, Swindon, Wiltshire. From a very early age she wanted to be a film star, go to Hollywood and have a cream telephone and a swimming pool. Encouraged by her family in September 1945 she started attending the London Academy of Music and Dramatic Art. At this time she also changed her surname to that of her grandmother, and became Diana Dors. After completing 18 months at LAMDA, Diana Dors attended the J Arthur Rank school for young actors which groomed its students for “star image”, deportment, grace, charm, manners and decorum being the order of the day.

Her training at J Arthur Rank was Worlds away from the publicity seeking exploits and extravagant and glamorous lifestyle of Diana Dors which did much to brighten a rather austere and repressive Britain in the late 50’s and early 60’s. In the era of the sex symbol she was hailed as Britain’s answer to Marilyn Monroe and her association with famous men did much to enliven the popular press who followed here every move.

When age began to bury her famous figure under more matronly proportions the Diana behind the image the Diana behind the image came to the fore, and what was revealed was, to most peoples surprise, far more endearing. She came a character actress of considerable talent and a personality seen regularly on television and heard on radio. She possessed an unforgettable warmth and sincerity and nobody was surprised when she was voted Television Personality of the Year in 1983.

The emerging of the real Diana Dors can be traced back to 1968 when she met actor Alan Lake, they immediately fell in love and within six weeks were married. In 1967 Diana had purchased Orchard Manor a magnificent mock Tudor mansion standing in acres of ground at Sunningdale near Windsor, Berkshire. 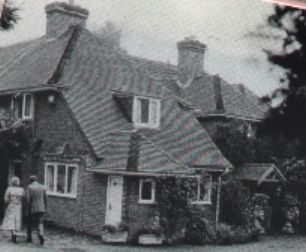 She furnished her home a la Hollywood with gilt chairs, gilt framed mirrors, pictures and turquoise and gold upholstered furniture. The centerpiece was a large stone farmhouse style fireplace which curved round a corner of the drawing room to form an attractive cocktail bar complete with running water and sink. Positioned in a leafy lane Orchard Manor was both private and peaceful far removed from the life she had led for the previous 12 years in Hollywood. It was a perfect home for the newlywed Mr. and Mrs. Alan Lake. 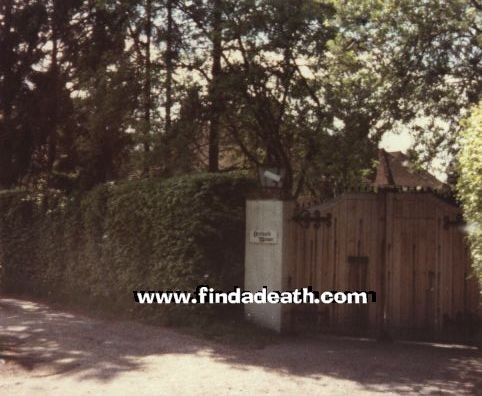 In June 1982 Diana was rushed to hospital with severe stomach pains and when they operated they found an ovarian cyst which had ruptured. The cyst had been malignant and Diana had cancer. Diana had to check in to Charing Cross Hospital, London every week for two days and two nights to undergo chemotherapy. Her reaction to the treatment was severe and she could be sick up to five times an hour but never complained believing it would make her better. Diana did get better and in October 1982 received the accolade of a second This Is Your Life appearance. In March 1983 TVam asked her to shed weight in public, 52 pounds to match 52 years of her life. Not wanting to let herself or her public down Diana did lose weight and it was a much shapelier Diana who at the end of August the same year went back to her hometown to open a new airfield.

In September 1983 doctors had told Diana she needed a life saving operation, malignant cells had spread to the stars stomach and the cancer was back. Alan Lake kept the devastating news to himself and Diana welcomed the Press into her private room at hospital buoyant with optimism that they operated successfully. With the New Year 1984 Alan and Diana were both busy working, Diana wrote regular columns for newspapers appeared on her own programme Open Dors and answered mountains of fan mail. In February she agreed to star in a film with Vanessa Redgrave called Steaming. It was during filming that doctors changed her treatment and put her on a course of cancer killing tablets, she placed great store in these and also her faith that God would cure her.

April 1984 Diana started experiencing what she called nasty side effects from her treatment and the crippling stomach pains returned. After a week in bed cared for by Alan, Diana was taken on a stretcher to the Princess Margaret Hospital in Windsor. On Monday 30th April they operated to remove a blockage and the doctors discovered that the cancer had spread throughout her whole body even to the marrow of her bones. The entire nation was praying for Diana Dors but she deteriorated fast over the next few days and in the early hours of Friday 4th May, a priest was called. Diana Dors died peacefully that evening her blonde hair beautifully brushed out wearing her own favorite shorty nightie in white cotton with green and red polka dots. Around her neck was the gold necklace that Alan had given her which spelt out the letters D-O-R-S. Her last words were “I love you and the boys, look after them for me, I love you”. 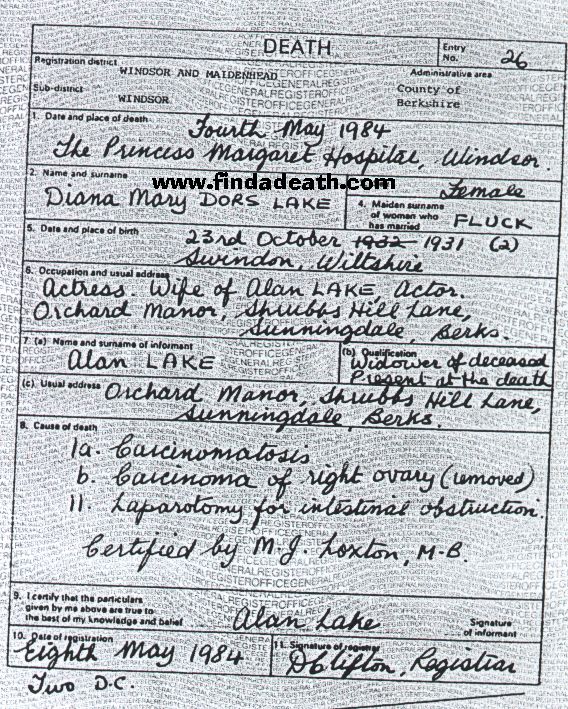 The Requiem Mass was funeral service were held at the Church of the Scared Heart, Sunningdale. The legendary glamour girl of the silver screen had been placed in a golden oak coffin clothed in her most sensational evening gown of gold lame with a matching full cape. Thick platinum blonde hair combed gently over her shoulders framed in a now tiny face, around her neck the unique gold D-O-R-S necklace. Diana was laid to rest just as she would have wanted, a mile away in the tiny Sunningdale Cemetery in the shade of a sycamore tree with a battery of photographers and film cameramen ready to frame forever in close up these final emotional moments.  Thousands of flowers adorned the occasion. 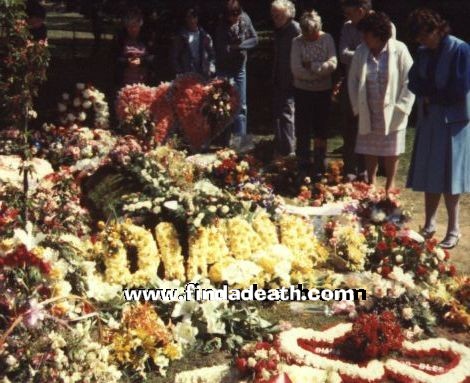 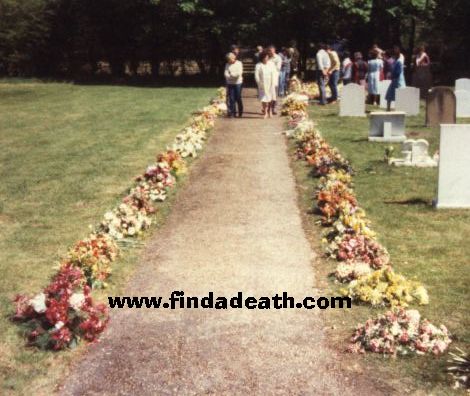 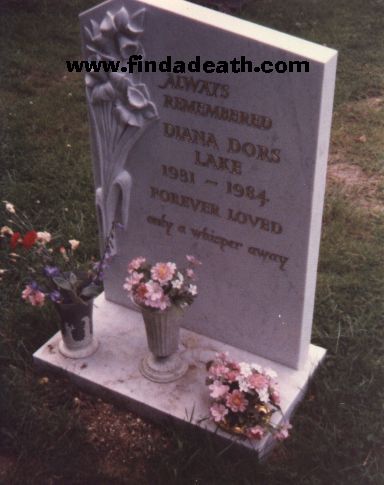 Alan Lake did not cope well with the death of Diana and he became more and more reclusive at Orchard Manor which he had left exactly as it was the day Diana died. Not sleeping pills, prayers or his frequent visits to her grave could shake of the depression and loneliness. On October 10, the day he and Diana had first met sixteen years previously Alan took a single barrelled shotgun up to the bedroom and blew his brains out. He was buried a few days later next to her in Sunningdale cemetery. Alan Lake had spent all of his married life proclaiming to the World his love for Diana Dors. It was not until he took his own life that people believed him.

December 2003 sent in by findadeath.com friend Gus, ” A couple of months ago, Channel 4 in the UK showed a series about ‘stars’ missing milions. Fantastic! Among featured were Michael Hutchens, Marc Bolan, Benny Hill, and Diana Dors.

The interesting thing about Diana Dors is that she was not broke. After her appearance on ‘This is your life’, she handed a sealed envelope to her son, claiming her husband had the other information. He did not open it until later, and discovered it was a secret code, detailing where all her (considerable) amounts of money were hidden. She avoided the ‘tax man’ like the plague, asking to be paid in cash at every opportunity. Which appears to be a lot!

This fabulous programme opened up a whole load of cans of worms…………. Why has her son left it sooo long to try and crack the code, etc. Great! Even better, from your point of view, is that Channel4 has pages on their website about it (for how long, I don’t know) so you can read-up. I actually recorded the show, but if you are back in the states, don’t know if you would be able to view the ‘PAL’ tv system.

It’s incredibly interesting viewing, and a bit scary, as her ‘American’ son looks uncannily like her, considering he’s a bloke. It’s also quite tragic when you discover her possessions ended up after auction in the hands of a creepy, hippy-type loner in England, after her husband killed himself. Tragic indeed.

Gus sent me the tape of the program, and it was fantastically interesting.  A very cool ending to a very cool chickiepoo.  They did manage to solve half of her scrambled notes, but have no idea where exactly her money is hidden.  Thanks Gus for sending it to me.

Trivia! I stupidly left out the fact that Diana was once married to Family Feud’s Richard Dawson, and they had two sons together.  Thanks Harry, Donna and others for reminding me.  Forever grateful. x

Hey, love your Find a Death website. But for Diana Dors, you left out her most enduring legacy: she’s the blonde bombshell pictured on the cover of the Beatles’ Sgt. Pepper’s Lonely Hearts Club Band album.

Thanks for that piece of info, Chris!

James Rieker reminds us that Diana appeared on The Smiths SINGLES album. 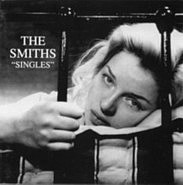 My buddy Nate sends me this: Diana also portrayed the “Fairy Godmother” in Adam and the Ant’s video for “Prince Charming” in 1981.