Hollywood is like an empty wastebasket.
The only way to enjoy anything in this life is to earn it first.
I had been making films for almost ten years, and the head men at RKO thought of me only in terms of musicals. I found no fault with that, except I just couldn’t stand being typed or pigeonholed as only a singing and dancing girl. I wanted to extend my range.
Perhaps I am old-fashioned, but black and white films still hold an affectionate place in my heart; they have an incomparable mystique and mood.
You bring out a lot of your own thoughts and attitudes when acting. I think a great deal of it has to do with the inner you.
Rhythm is born in all of us. To be a desirable dancing partner, you don’t have to do all the intricate fancy steps that happen to be in vogue. All you have to do is be a good average dancer, and anybody who spends the time and effort can accomplish this.
I won’t go to movies with permissiveness, four-letter words, or violence. Show me ‘E.T.’ and ‘Chariots of Fire’ instead. That’s entertainment, not exploitation of the human body.
The most important thing in anyone’s life is to be giving something. The quality I can give is fun and joy and happiness. This is my gift.

When two people love each other, they don’t look at each other, they look in the same direction.
Over the years, myths were built up about my relationship with Fred Astaire. The general public thought he was a Svengali, who snapped his fingers for his little Trilby to obey; in their eyes, my career was his creation.
Show More Quotes
Show less

In her career, Virginia Katherine McMath made a total of 73 movies over 40 years. She only made 10 with Fred. Go figure. She won an Oscar in 1940, for her role in Kitty Foyle. She was also a radical right winger, a proud member of the Daughters of the American Revolution (I ain’t sayin it), and a Christian Scientist. She was married 5 times, and was once engaged to Howard Hughes.

Roberta says, “I was looking up Ginger Rogers on the web and came across your site by accident.  Too bad you are relying on such bad and mean spirited information in your piece on her.  I’ve sent a few points of clarification.

Ginger bought a house in Shady Cove, Oregon in 1940. She spent all the time she could there, with her mother (with whom she was extremely close). She considered herself an Oregonian, and was registered to vote and paid taxes there. In 1990 she sold the house, and moved into another on Pioneer Road, in Medford. 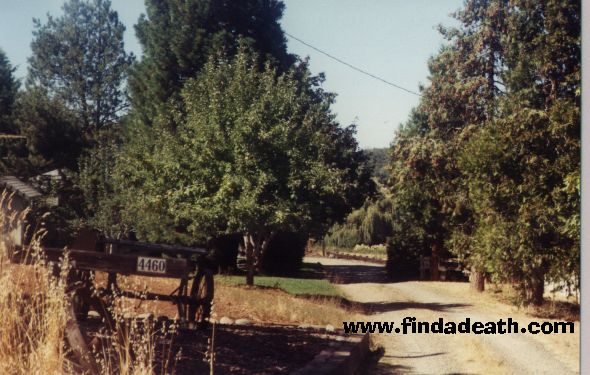 Here’s the house from a distance, 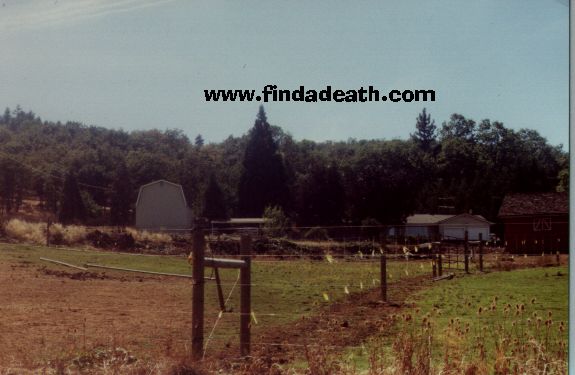 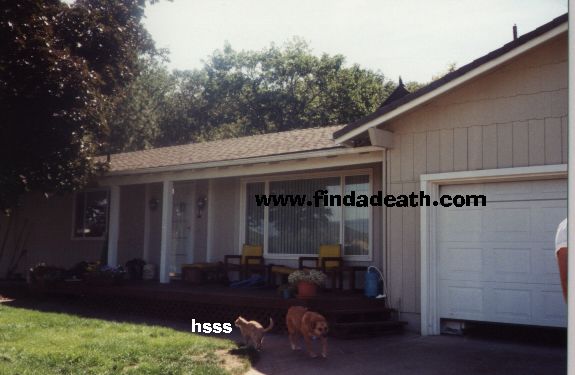 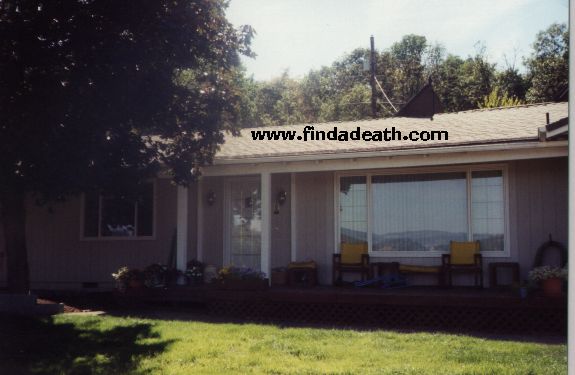 and of course, the obligatory mailbox shot. 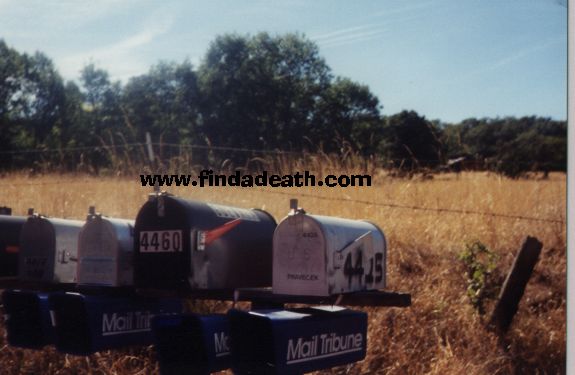 Roberta says, “None of the photos you have on that page are of her house in Oregon.  Miss Rogers home before the Medford house was in Eagle Point, Oregon, not Shady Cove (although its just down the road).  Point taken.  They should correct Ginger’s official death certificate.  That’s where I got the info from.

She kept herself pretty active (mostly accepting awards) until she suffered two strokes, and she became wheelchair bound. 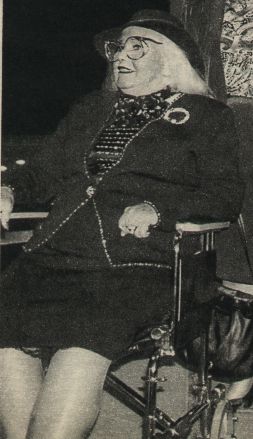 Oddly, she never saw a doctor – or entered a hospital. She rarely made public appearances after that.

I read one report that towards the end of her life, she would have friends over, and screen videos of her movies. She would let guests choose the film they wanted to see (how generous), but she demanded no conversation during the film. She enjoyed studying her films along with her companions. She was either a fag hag (and they just lived for every word that came out of her, which I can totally see happening) – or she was just plain conceited. (I know! Let’s watch ME! Which movie starring ME do you want to watch? Tell me what you think of ME!)

Roberta says, “Many times her dinner guests would request to see a film of hers that they had never seen before and, at their request, she would accommodate them.  She preferred to watch the news and did not watch her own films unless someone asked to see one of them.”

On April 25th, 1995 – she was at her winter home in Rancho Mirage, when she finally bit it. The house is located at 40 230 Club View Drive, in a gated community. (Findadeath.com friend Terri Rios tried for photos, but couldn’t get them. Any nervy people in the area of Palm Springs feel like checking it out? We could sure use the pictures.)

Ginger’s assistant, Roberta Olden, was supposedly with her when she died. According to Roberta, “She passed away just the way she’d wanted, at home, in her bed. When I saw her weakening and became concerned, I called her practitioner (A Christian Scientist devoted full time to spiritual healing), who prayed for her. It was what she wanted, what she requested when the end was near. Later that day, I saw her weakening even more and beginning to slip away. I called the practitioner again, and he continued to pray.”

“Her passing was so peaceful. Her last words to me were, “I’ve had a wonderful life. God’s will will now be done. Praise to God.” Do we believe her?

Roberta says, “I was with Miss Rogers when she died at her home in Rancho Mirage.  Your quote of her last words is inaccurate.  Ok.  What are they? 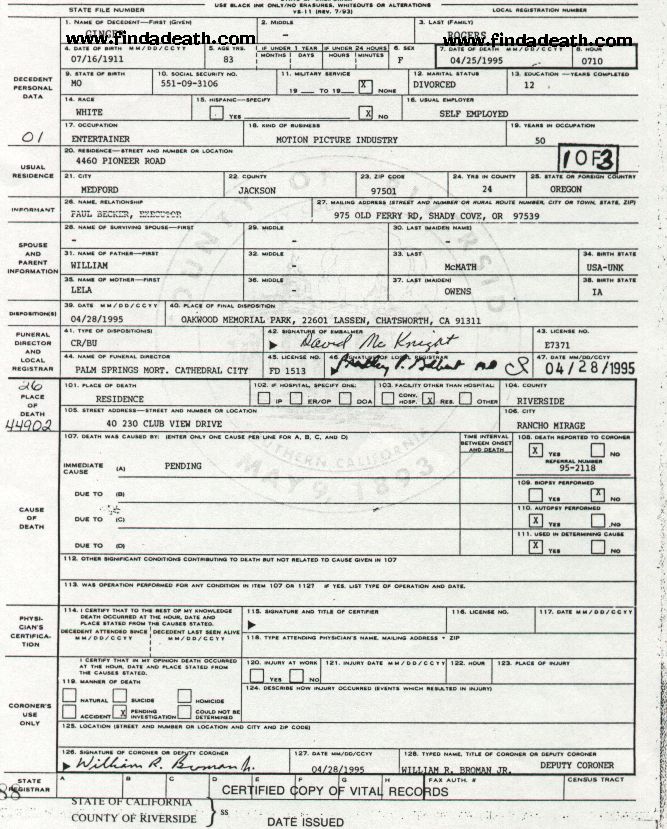 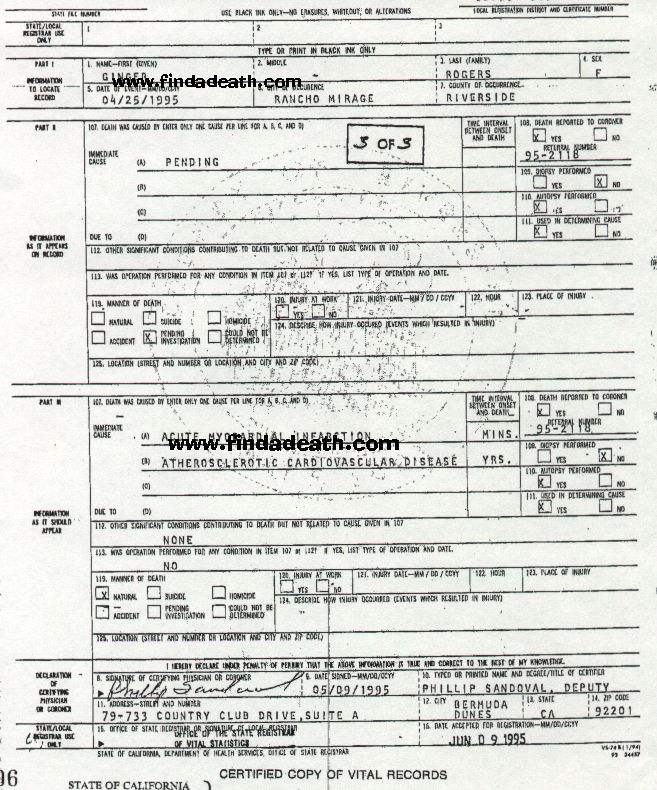 What I find really interesting, was that this 83-year-old lady died at home. She hadn’t been in the best of health – yet – they did an autopsy. There must have been some suspicion or something. I just thought it odd.

Findadeath.com friend Patty enlightened me:  “THE REASON MISS ROGERS HAD AN AUTOPSY IS IF THEY WERE NOT UNDER A DOCTOR’S CARE FOR THE PAST 40 DAYS, STATE REGULATION REQUIRES THEY ARE AN AUTOMATIC CORONER’S CASE.”  Thanks for clearing that up, Patty.

Roberta says, “I resent the implication that there may have been anything fishy about the circumstances of her passing.  Fine.  Relax.  Its been clarified.

It began: ” The body is that of an unembalmed, refrigerated Caucasian female adult who appears younger than the stated age of 83 years. The body appears well developed and nourished. No tattoos are identified.” The rest is a lot of technical jargon (except that she painted her toenails, and never had a boob job) and she died of natural causes.  Acute Myocardial Infarction/Heart Disease.

She is buried with her mother, in Oakwood Memorial Park, in Chatsworth CA. Ironically, it’s the same cemetery as Fred Astaire.

She once performed at the Hunt’s Craterian Theatre located at 23 S. Central Avenue, in Medford, in 1926. When the theatre went into disrepair, and with Ginger’s help in fundraising, it was remodeled and reopened as the Ginger Rogers Theater, in March of 1997- two years after she died. 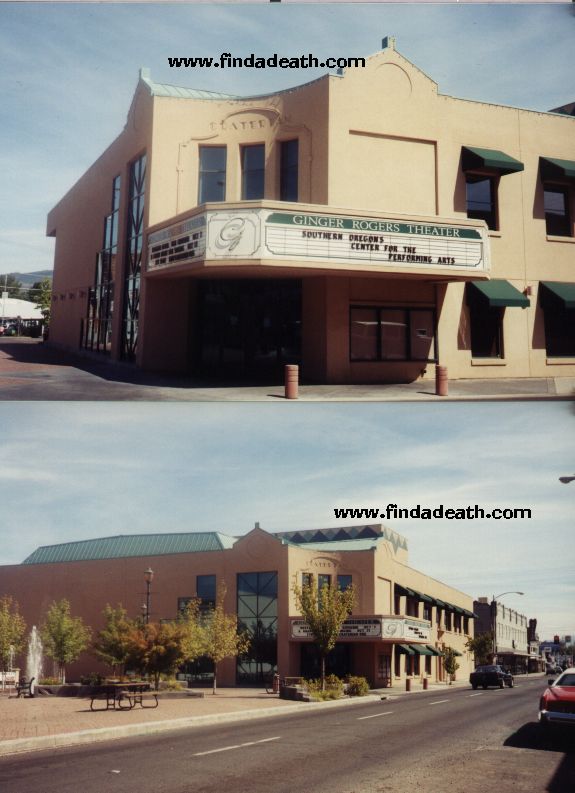 Upon hearing the news of her death, RENTAMOUTH A.C. Lyles from Paramount Studios said, “She was an actor, a star, a superstar and, boy, she was a legend.” I hate him.

Trivia: Katharine Hepburn once said of the Astaire /Rogers pairing, “Ginger gave him sex and he gave her class.”

More: I rarely throw anything out. I wrote Ginger in 1989, and requested an autograph. I got this postcard in May of the next year. 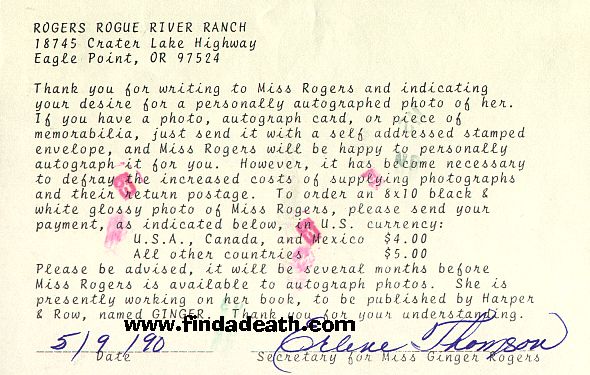 I sent my 4 bucks for a photograph, and two years later, I got the photo at the top of the story. Took awhile, but it got there!

GINGER ROGERS WAS ONCE QUOTED AS SAYING, “FRED ASTAIRE IS SO
GREAT. I DO EVERYTHING HE DOES, ONLY BACKWARDS AND IN HIGH HEELS.”

Roberta says, “The quote came from Bob Thaves, of the “Frank and Ernest” comic strip.  It was he who came up with the line, not Miss Rogers.

A Findadeath.com experience – courtesy of a new friend, Greg:  “I really liked your piece on Ginger Rogers. I have a little tidbit on her: Back in like 1990-1991, I was working in a building in Chicago, called Water Tower Place. It is an upscale 7 level mall. I had a job in undercover security there right after college.

Anyway, Ginger came in there for a book signing or an appearance, I cannot remember. I had to push her in her wheelchair from the store she was in, to the elevator. The poor dear had seen her better days. She had so much makeup on, it looked like it was put on with a trowel. In addition on her right temple, she had this huge running sore caked with makeup. Nice, huh?

When she got outside, she was able to stand up with assistance to get in her limo. I said “hello” to her and she was very grateful for me pushing her in her wheelchair. She seemed very nice and polite.  I thought this little encounter might interest you.”

It did!  Thanks you for sharing, Greg!

The reason Ginger Rogers wore a ton of makeup is because she had an unusual amount of peach fuzz on her face. She was supposed to have been very sensitive about it and refused to remove it, so her publicity stills all had to be retouched before distribution.

When Judy Garland got canned from the film The Barkleys of Broadway with Fred Astaire in the Forties and was replaced by Rogers, Garland pissed her off (I’m assuming it pissed her off) by sending her a big shaving mug with GOOD LUCK inscribed in gold letters.

Nearly spit my Pepsi, Kevin!  Thanks for that!

Findadeath.com friend David Fowles traveled all the way to Palm Springs to get this photo of Ginger’s star, on Palm Canyon Drive. 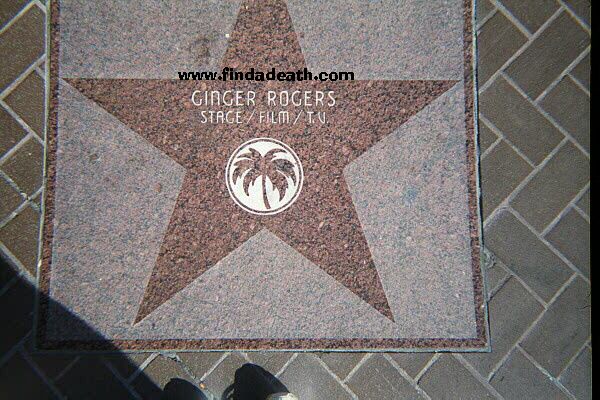 Thanks so much David.

It says on the Ginger Rogers page that it was odd she had not been hospitalized or had gone to a doctor. It is not odd for her, in that as a devout member of the Christ Scientist faith, they do not believe in doctors and traditional medicine and medical intervention for the most part. I was a student in Boston and learned more about the Christ Scientist religion when there since the mother-church is there and you can’t avoid seeing it or reading something about the religion there. This is why they have prayer counselors. They believe prayer and God will provide the needed care.

Many thanks to Findadeath.com friend Tami Dingle for all of her help with Ginger’s text and photographs. Tami lives in Oregon – and has been a terrific contributor. Thank you SO much, Tam.