I’ve had a wonderful time, but this wasn’t it.
I refuse to join any club that would have me as a member.
Outside of a dog, a book is a man’s best friend. Inside of a dog it’s too dark to read.
Well, Art is Art, isn’t it? Still, on the other hand, water is water. And east is east and west is west and if you take cranberries and stew them like applesauce they taste much more like prunes than rhubarb does. Now you tell me what you know.
I never forget a face, but in your case I’ll be glad to make an exception.
A black cat crossing your path signifies that the animal is going somewhere.
I worked my way up from nothing to a state of extreme poverty.
If I held you any closer I would be on the other side of you.
Before I speak, I have something important to say.
I wish to be cremated. One tenth of my ashes shall be given to my agent, as written in our contract.
Show More Quotes
Show less 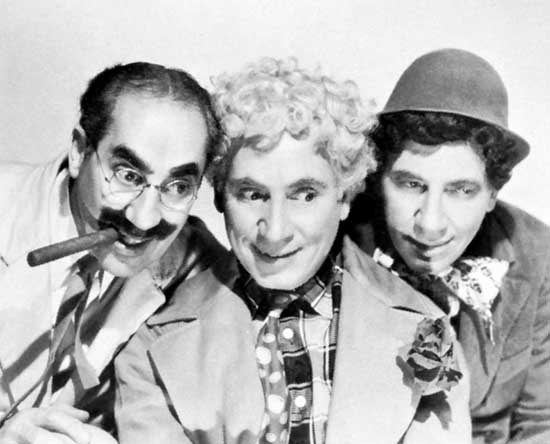 He was the focal point/leader of the Marx Brothers, as well as the host of the television series You Bet Your Life. He was one of the true Hollywood legends. If it weren’t for Groucho, we wouldn’t have these: 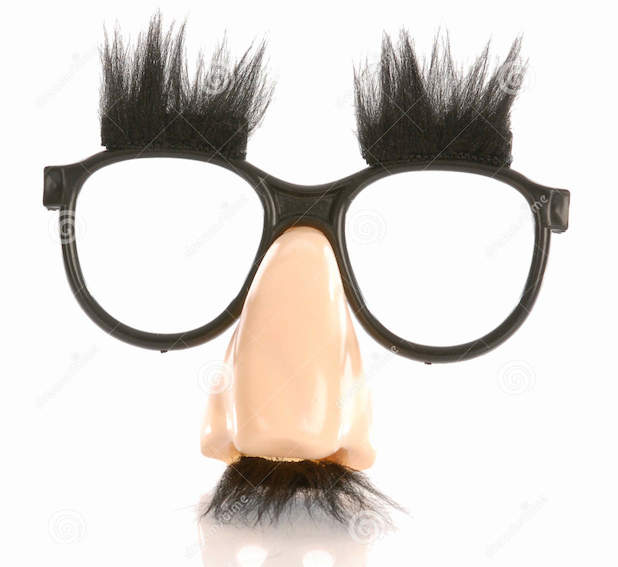 There is plenty of information on him and the Marx Brothers elsewhere; we’ll concentrate on the END of Groucho.

Groucho had pretty much retired by the late sixties.  Someone once told me that his business office was above the comedy club The Laugh Factory on Sunset. Employees claim that Groucho haunts the place.  There is a lot of Groucho memorabilia in the club, so I choose to believe this. 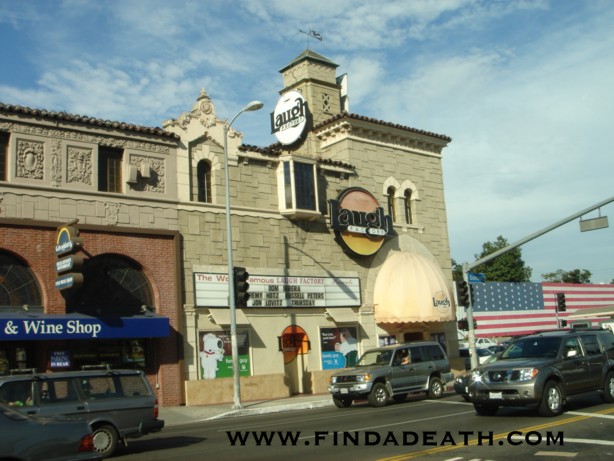 He lived in this house on a steep street in Trousdale Estates. Directly across from Dave Novarro and Carmen Electra’s old house. A person named Erin Fleming (age 30) was hired on as Groucho’s secretary in 1970 and the two of them began a relationship. Erin is credited with getting Groucho out of retirement for his 1972 Evening With Groucho concerts at Carnegie Hall. Friends credited Fleming with keeping Groucho alive with her “stimulating influence.” 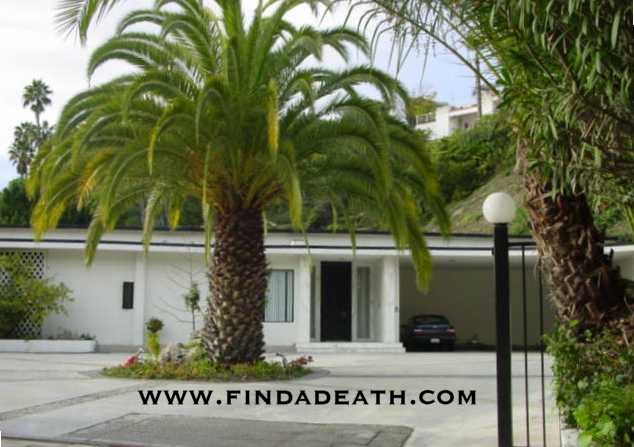 He was hospitalized at Cedars for pneumonia on June 22 of 1977, a day after he was released for hip surgery. In failing health, he lingered in the hospital for several weeks.

There are those who say that Groucho was out of it for several months, and there was a court battle between Fleming and Groucho’s only son, Arthur, as to who would control Groucho’s estate. The battle ended when Groucho’s 27-year-old grandson Andrew was made executor.

On Wednesday, August 16th, Groucho took a turn for the worse. He was put on oxygen and fed intravenously. By Friday the 18th he was slipping in and out of consciousness.

Early on the 19th, Erin Fleming made a statement to the AP, “Groucho is just having a nice little dream now.  He’s just going to have a nap and rest his eyes for the next several centuries.”  Fleming left the hospital, and within 15 minutes, Groucho died.  His son, Arthur, daughter-in-law and grandson were in the room. It was 7:25 p.m. on August 19, 1977. 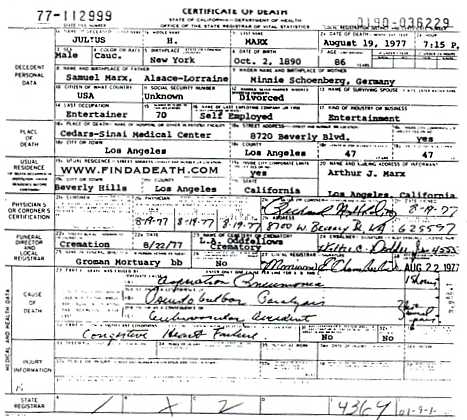 The hospital waited 50 minutes to make the announcement, giving the family time to leave and GTF home.

There was a private family memorial gathering at Arthur’s house on that Sunday.

Upon hearing the news, Lucy (the) commented, 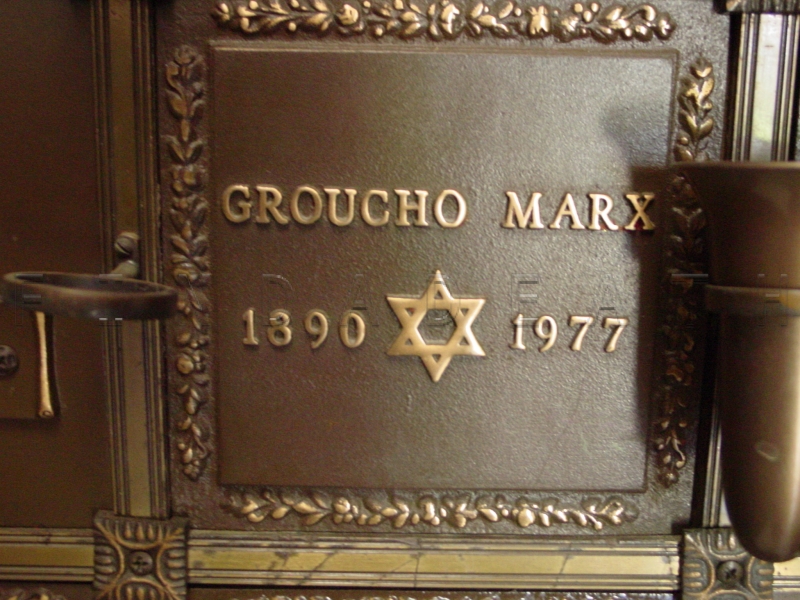 After Marx died in 1977, his remains were placed at Eden Memorial Park. Five years later, in May 1982, his ashes were stolen, and were found later that day at the gates of Mount Sinai Memorial Park in Los Angeles, about 12 miles away. The kidnapper — or, in this case, ash-napper — has never been caught, and so the questions remain. Why were Marx’s ashes stolen? An obsessed fan looking for the ultimate souvenir? A ghoulish opportunist planning to make a ransom demand, then changing his mind? Or simply someone who thought the comedian should be buried at a more high-profile location closer to Hollywood?

He was the inspiration for the Vlasic Pickle Stork.

Gabe Kaplan was a big fan, and often imitated him on the television series Welcome Back, Kotter.

He was good friends with Alice Cooper, and often invited him to come over and watch TV with him at 11 o’clock at night. Cooper later paid for the renovation of the last letter O in the giant Hollywood sign as a tribute to Groucho. 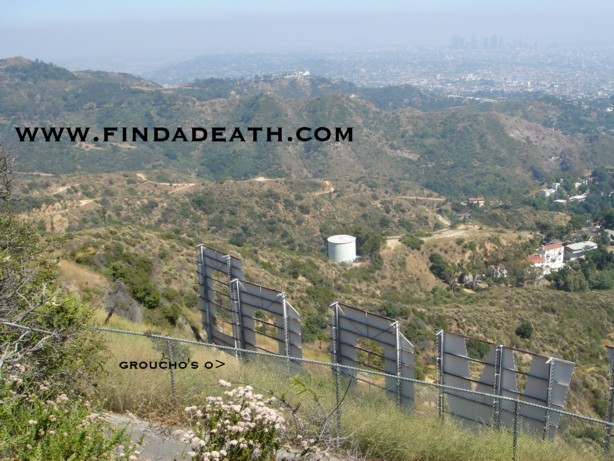 He almost appeared in The Exorcist. He was good friends with the author, William Peter Blatty. 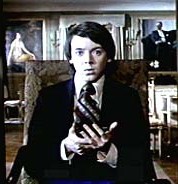 Bud Cort of Harold and Maude used to live with Groucho. Bud answered some questions for George Wayne in Vanity Fair a while back, and the subject came up.  “I got invited to a party at Groucho’s. I took a cab up there, and the second my fist connected with the door, there stood Groucho in a beret. Simultaneously we both gasped, and he slammed the door in my face. When the door opened again, Groucho said, I’m sorry, I thought you were Charles Manson. [it was just after the murders] Then it turned out we had the same psychiatrist, and he started dropping these ideas that I should live with Groucho. Q: Was Groucho in love with you? Bud: I used to say he was my fairy godfather. He did love me, and I loved him. I’d sit on his bed in pajamas and watch his old films with him. It was like getting a Fulbright education in comedy.” 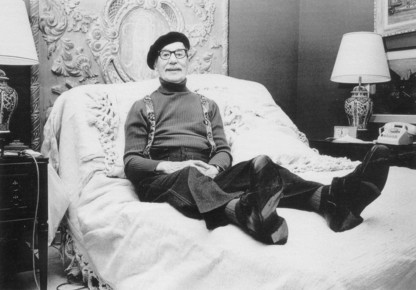 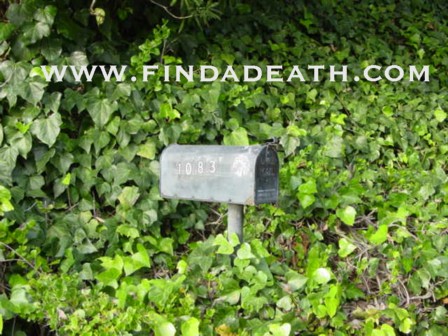 These are the Marx Brothers in horrifying wax and historic concrete. 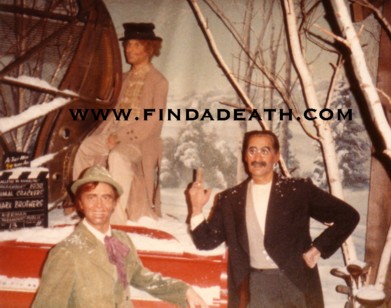 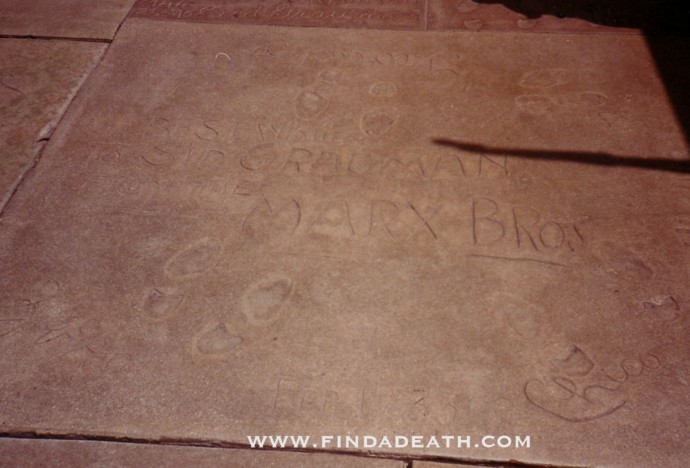 Read some of Groucho’s zingers HERE.

Erin Fleming used to come into the West Hollywood Library. She was as nutty as a fruitcake. She used to go into Saks Fifth Off, and try on clothes and put them on lay away, and never go back to finish the sale. She would twirl around Saks like an old ballerina, singing to herself. She once stood up in the middle of mass at St. Victors Church, and screamed “CHRIST WAS NOT THE LAMB OF GOD!!” About four years ago she committed suicide. I do feel she got screwed over my the Marx family. She did take care of him, and change his diapers towards the end, and got left with nothing but a nervous breakdown.

My pal Alan turned me on to Mark Evanier’s website, which shares these recollections of meeting Groucho in his later years, and I found it really interesting.

July 2008 Groucho’s house has been destoryed. 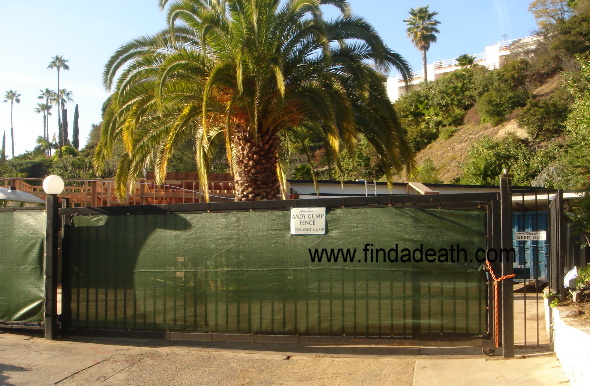 Story by Kevin Hassell and thanks Harry for the tips.